New Target for Precision Medicine Treatment of Giant-Cell Tumor of Bone: Sunitinib Is Effective in the Treatment of Neoplastic Stromal Cells with Activated PDGFRβ Signaling 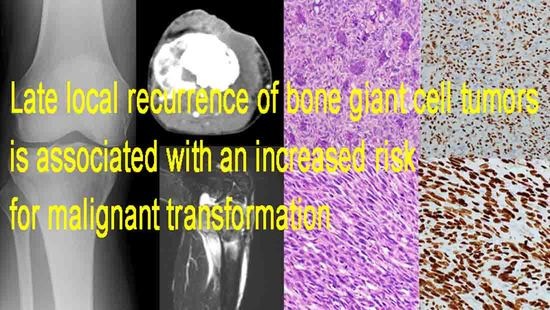 Giant cell tumor of bone (GCTB) is an intermediate malignant osteoclastogenic stromal tumor with a broad biological spectrum [1]. Genetically, GCTB is characterized by specific mutations in the H3F3A gene, which encodes histone H3.3 [2]. Typically, this tumor involves the metaphyseal-epiphyseal region of long bones [3]. Furthermore, no gender-based predilection has been noted, and the peak incidence is between 20 and 45 years of age [4,5]. Curettage is followed by minimal disability but may be associated with a relatively high local recurrence rate [4,5,6]. Resection has been associated with a lower risk of local recurrence but can lead to relatively severe functional impairment [5].
Primary and secondary malignant GCTBs account for approximately 4% of all GCTB cases [7,8]. Primary malignant GCTB is simultaneously diagnosed with sarcoma during the initial GCTB diagnosis. Secondary malignant GCTB occurs when the malignancy is diagnosed at the site of a GCTB that is previously treated with surgery or radiotherapy [7]. Radiotherapy reportedly induces late malignant transformation of GCTB [9,10,11,12,13] and is usually not recommended for treating GCTB [8]. Typically, patients with GCTB are relatively young. Misdiagnosis of malignant GCTB significantly worsens patient prognosis, as wide resection, with or without chemotherapy, is required to treat secondary malignant GCTB [7]. Therefore, it is crucial to consider risk factors for malignant transformation during the follow-up of patients with GCTB. However, there are no available reports on the risk factors associated with the malignant transformation of GCTB. Accordingly, we performed a retrospective assessment to analyze risk factors for malignant transformation of GCTB treated without radiotherapy.

We retrospectively reviewed the medical records of 530 patients with GCTB of the extremities who had been admitted and treated at two institutions (IRCCS Istituto Ortopedico Rizzoli and Nara Medical University) between January 1980 and December 2019. IRCCS Istituto Ortopedico Rizzoli is a high-volume center specializing in bone and soft tissue tumors that is referred from all over Italy. Nara Medical University is a certified institute specializing in the treatment of sarcoma of the extremities, which is a tertiary hospital in Nara prefecture, Japan. Inclusion criteria included patients with GCTB of the extremities who had a postoperative follow-up period of 6 months or longer. Exclusion criteria included patients with primary malignant GCTB and missing data, patients with a history of radiotherapy owing to the possible relationship between radiotherapy and malignant transformation [8], and patients who received denosumab for GCTBs, owing to the possible association between denosumab administration and malignant transformation [14,15,16,17,18,19,20,21,22,23,24,25]. We retrieved the following data from the patients’ medical records: age, sex, site, Campanacci stage of GCTB [4], previous surgery (curettage or en-bloc resection in another hospital), surgery type, local recurrence, lung metastasis (synchronous or metachronous), malignant transformation, and follow-up period.

Four patients with primary malignant GCTB and four patients with missing data were excluded from the analysis. Three patients with a history of radiotherapy were also excluded. In addition, 22 patients with a follow-up period of less than 6 months were excluded. Thirty-six patients who received denosumab preoperatively and postoperatively were excluded. The remaining 461 patients were included in this study for further analysis (Figure 1). No patient was recalled for the purpose of this study.
Curettage was indicated for patients with GCTB in Campanacci stages 1 and 2, with or without a pathological fracture [26,27]. Curettage was performed through a large cortical bone window using sharp curettes, enabling the removal of all visible tumor tissues [26,27]. The cavity was then curetted with a high-speed burr and washed with saline to remove all pathological tissues [26,27]. Subsequently, the tumor cavity was filled with bone allograft, polymethylmethacrylate bone cement, or hydroxyapatite [26,27]. En-bloc resection was indicated for patients with GCTB in Campanacci stage 3 or pathological fractures with joint invasion and GCTB in expendable bones [26]. Reconstruction after resection was performed using a modular prosthesis, massive bone allografts, allograft composite prostheses, or vascularized fibular autografts [26,27]. Amputation was indicated in four patients with an extensive tumor encasing the neurovascular bundle and precluding neurovascular bypass and limb-salvage surgery.
As shown in Table 1, the median age of patients was 30 years and the male–female ratio was 49% vs. 51%. Tumor sites were most common in the distal femur (33%), followed by the proximal tibia (26%), and the distal radius (12%). The Campanacci stage was 2% for stage 1, 58% for stage 2, and 40% for stage 3. The proportion of patients who had been treated at a previous hospital was 17%. Regarding surgical methods, curettage accounted for 59%, and resection and amputation accounted for 41%. Patients who had one local recurrence accounted for 14%, and those who had two or more local recurrences accounted for 4%. Patients with lung metastases at presentation accounted for 2%, and patients with lung metastases later accounted for 5%. Details of the 26 patients who experienced lung metastases without malignant transformation were shown in Supplementary File (Table S1).

3.2. Incidence of Malignant Transformation of GCTB

3.4. Comparison of Time to Local Recurrence between Benign GCTB and Secondary Malignant GCTB

3.6. Risk Factors for Malignant Transformation from GCTB Treated without Radiotherapy

3.7. Details of Excluded Patients Who Received Surgery and Denosumab

The details of the 36 patients receiving denosumab are presented in Supplementary File (Table S2). Denosumab was indicated for the downstaging of GCTBs located at the distal radius, as tumors at this location are considerably aggressive, and resection was associated with worse functional outcomes [26,28]. In addition, denosumab was prescribed for GCTBs where surgery could potentially result in severe morbidity [29]. In 36 patients, preoperative denosumab was administered subcutaneously at a dose of 120 mg once per week for 1 month, and then once per month for 2–30 months, based on the recommendation for discontinuation by treating physician, the occurrence of an adverse event, clinical benefit from treatment, surgical planning, or as per the clinical trial protocol. In 35 of the 36 patients, surgery was performed 1 month after the last preoperative denosumab administration, as follows: curettage in 30 patients and en-bloc resection in 5 patients. Only one patient did not undergo surgery and continued denosumab therapy for 29 months. The patient experienced local recurrence and underwent amputation three years after denosumab treatment was discontinued. In addition, the patient experienced lung metastasis and was diagnosed with malignant transformation 2 years and 10 months after amputation (Case 16; Table S3). Postoperative denosumab was administered at the same dose as that administered preoperatively in 25 of 30 patients who underwent curettage; in three of five patients who underwent en-bloc resection, denosumab was administered once per month for 1–6 months, depending on the recommendation for discontinuation by the treating physician [30]. In patients treated with denosumab, malignant transformation was detected in two of 36 patients (5.6%) at 48 and 100 months of follow-up. The median follow-up of 36 patients was 97.5 months (interquartile range [IQR], 84.8–109).

In conclusion, late local recurrence of GCTB is associated with a higher risk of malignant transformation. Therefore, special attention must be paid when a patient with GCTB presents with local recurrence after a long interval following primary tumor surgery.

The datasets generated, analyzed, or both during the present study are not publicly available because of privacy issues but are available from the corresponding author upon reasonable request.

The authors thank all the patients and their families. 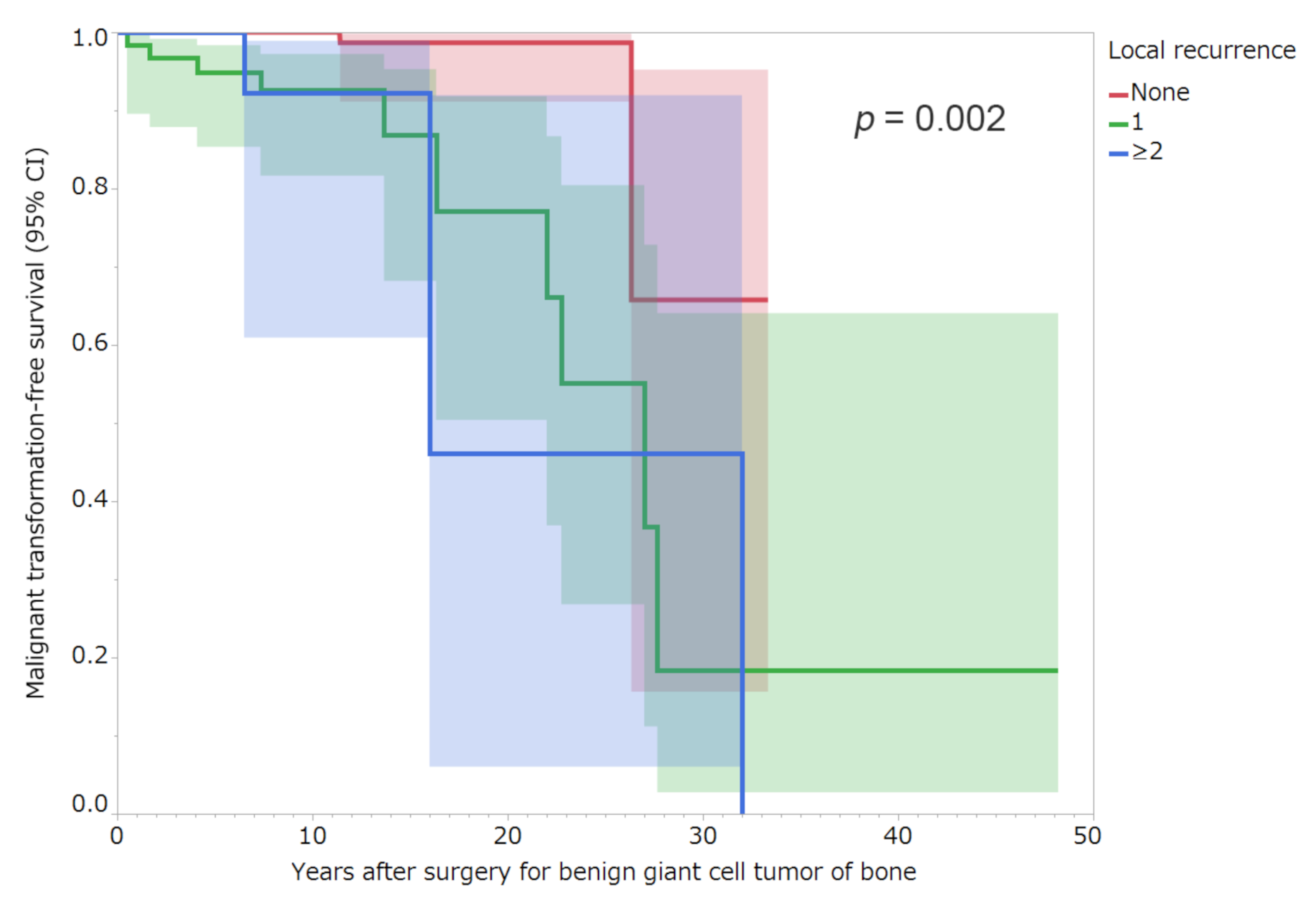