The Role of Elective Neck Treatment in the Management of Sinonasal Carcinomas: A Systematic Review of the Literature and a Meta-Analysis

Here, we monitored the course of the disease and treatment of sinonasal melanoma patients. Since treatment options are rare, immunotherapy is often the treatment of choice. However, intrinsic or acquired resistance to treatment may occur. We assessed the mutational status of the tumors and metastases during the course of therapy and recognized a switch of the oncogenic drivers to mutant NRAS in progressing disease. As a switch of drivers (other than the addition of a second driver) has not been reported yet, longitudinal molecular testing and the awareness of molecular heterogeneity of sinonasal melanoma is crucial.

Mucosal melanoma can be driven by various driver mutations in genes such as NRAS, KIT, or KRAS. However, some cases present with only weak drivers, or lacking known oncogenic drivers, suggesting immunotherapy over targeted therapy. While resistance mechanisms to immunotherapy in cutaneous melanoma have been uncovered, including alterations in JAK1/2, B2M, or STK11, a switch of oncogenic drivers under immunotherapy has not yet been observed. We report three cases of metastatic sinonasal melanoma that switched oncogenic drivers from KRAS, KIT, or no driver to NRAS during or after immunotherapy, thereby showing progressive disease. One of the cases presented with three spatially separate driver mutations in the primary tumor, whereas the NRAS clone persisted under immunotherapy. In comparison, three different control cases receiving radiotherapy only did not show a change of the detectable molecular drivers in their respective recurrences or metastases. In summary, these data provide an important rationale for longitudinal molecular testing, based on evidence for an unforeseen recurrent event of molecular driver switch to NRAS in progressing sinonasal melanoma. These findings provide the basis for further studies on a potential causal relation of emerging NRAS mutant clones and immunotherapy. View Full-Text
Keywords: mucosal melanoma; sinonasal cancer; oncogenic driver; immunotherapy; tumor heterogeneity; disease monitoring mucosal melanoma; sinonasal cancer; oncogenic driver; immunotherapy; tumor heterogeneity; disease monitoring
►▼ Show Figures 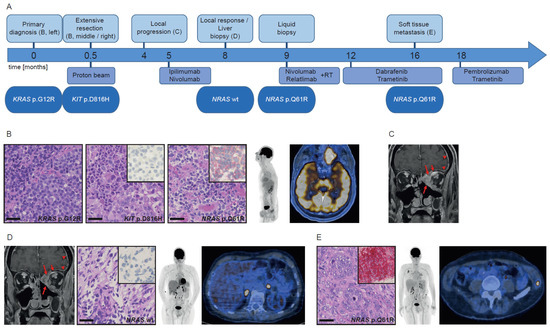