Active surveillance (AS) prostate cancer patients suffer from a lower quality of life, increased risk of anxiety and depression, and an increased risk of disease progression compared to patients who opt for curative treatment. The current inclusion criteria for AS patients is unable to accurately identify patients with increased risk of progression, and therefore there is a need for a risk stratification technique that can identify patients with a higher risk of disease progression. In this work, we leverage quantitative histomorphometric (QH) features describing nuclear position, shape, orientation, and clustering from initial H&E biopsy images to accurately identify AS-eligible patients who are at high risk for disease progression. Our findings indicate that QH features were correlated with the risk of clinical progression in AS-eligible patients and was able to out-perform judgements based on clinical variables such as Gleason score and pro-PSA.

In this work, we assessed the ability of computerized features of nuclear morphology from diagnostic biopsy images to predict prostate cancer (CaP) progression in active surveillance (AS) patients. Improved risk characterization of AS patients could reduce over-testing of low-risk patients while directing high-risk patients to therapy. A total of 191 (125 progressors, 66 non-progressors) AS patients from a single site were identified using The Johns Hopkins University’s (JHU) AS-eligibility criteria. Progression was determined by pathologists at JHU. 30 progressors and 30 non-progressors were randomly selected to create the training cohort D1 (n = 60). The remaining patients comprised the validation cohort D2 (n = 131). Digitized Hematoxylin & Eosin (H&E) biopsies were annotated by a pathologist for CaP regions. Nuclei within the cancer regions were segmented using a watershed method and 216 nuclear features describing position, shape, orientation, and clustering were extracted. Six features associated with disease progression were identified using D1 and then used to train a machine learning classifier. The classifier was validated on D2. The classifier was further compared on a subset of D2 (n = 47) against pro-PSA, an isoform of prostate specific antigen (PSA) more linked with CaP, in predicting progression. Performance was evaluated with area under the curve (AUC). A combination of nuclear spatial arrangement, shape, and disorder features were associated with progression. The classifier using these features yielded an AUC of 0.75 in D2. On the 47 patient subset with pro-PSA measurements, the classifier yielded an AUC of 0.79 compared to an AUC of 0.42 for pro-PSA. Nuclear morphometric features from digitized H&E biopsies predicted progression in AS patients. This may be useful for identifying AS-eligible patients who could benefit from immediate curative therapy. However, additional multi-site validation is needed. View Full-Text
Keywords: prostate cancer; active surveillance; machine learning; pathology prostate cancer; active surveillance; machine learning; pathology
►▼ Show Figures 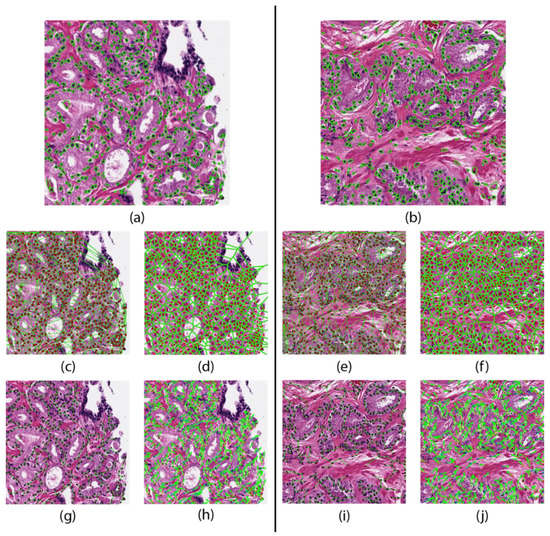