Divergent Patterns and Trends in Breast Cancer Incidence, Mortality and Survival Among Older Women in Germany and the United States

Background: Breast cancer treatment has changed tremendously over the last decades. In addition, the use of mammography screening for early detection has increased strongly. To evaluate the impact of these developments, long-term trends in incidence, mortality, stage distribution and survival were investigated for Germany and the United States (US). Methods: Using population-based cancer registry data, long-term incidence and mortality trends (1975–2015), shifts in stage distributions (1998–2015), and trends in five-year relative survival (1979–2015) were estimated. Additionally, trends in five-year relative survival after standardization for stage were explored (2004–2015). Results: Age-standardized breast cancer incidence rates were much higher in the US than in Germany in all periods, whereas age-standardized mortality began to lower in the US from the 1990s on. The largest and increasing differences were observed for patients aged 70+ years with a 19% lower incidence but 45% higher mortality in Germany in 2015. For this age group, large differences in stage distributions were observed, with 29% (Germany) compared to 15% (US) stage III and IV patients. Age-standardized five-year relative survival increased strongly between 1979–1983 and 2013–2015 in Germany (+17% units) and the US (+19% units) but was 9% units lower in German patients aged 70+ years in 2013–2015. This difference was entirely explained by differences in stage distributions. Conclusions: Overall, our results are in line with a later uptake and less extensive utilization of mammography screening in Germany. Further studies and efforts are highly needed to further explore and overcome the increased breast cancer mortality among elderly women in Germany.
Keywords: breast cancer; incidence; survival; mortality; Germany; United States; trends breast cancer; incidence; survival; mortality; Germany; United States; trends

Breast cancer (BC) is the most common cancer in women worldwide with an estimated 2.08 million new cancer cases diagnosed in 2018 [1]. It is estimated that 276,480 women will be newly diagnosed with BC and 42,170 women will die from BC in the United States in 2020 [2]. For Germany for 2016, 68,948 new BC diagnoses and 18,570 BC deaths were estimated [3]. In general, incidence rates vary strongly across countries and have increased over time [4]. The observed variations are mainly attributed to changes in reproductive patterns, the use of postmenopausal hormone therapy, and implementation of mammography screening programs [5,6,7]. Mortality rates have declined strongly over time in many countries. To what extent this mortality reduction can be attributed to mammography screening has been highly debated [8].
BC prognosis has improved steadily over time in most countries reaching a 5-year age-standardized survival in 2010–2014 between 70.8% (Russia) and 89.1% (Iceland) in Europe and 90.2% in the US [9]. In the US and in Germany, 5-year relative survival was 90% in 2015 [2] and 87% in 2015/16 [3], respectively. BC is a heterogeneous disease. Prognosis and treatment depend strongly on the cancer stage at diagnosis and the molecular subtype with the worst prognosis in stage IV and triple-negative BC [10]. Further classification methods based on genetic profiles are being developed to allow an even more accurate prognosis for recurrence and survival to further personalize treatment approaches [11,12]. In addition to classification and therapeutic improvements, changes in BC prognosis over time as well as variations across countries are affected by the implementation of mammography screening programs. Thus, improvements in BC survival at the population level do not directly reflect an improvement in BC care.
To get a thorough overview, incidence, mortality, and survival should be investigated in relation to each other [13]. Furthermore, a comparison of two or more countries might help in interpreting trends [13]. Here, we provide a comparison of long-term trends in BC incidence, mortality, and survival in Germany and the US, which were chosen for comparison because treatment guidelines are overall similar in both countries [14] but implementation and use of mammography screening differ strongly. An organized mammography screening program was implemented in Germany between 2005 and 2009 [15], while such screening programs were introduced in the US in the late 1980s [8]. Furthermore, while screening is recommended for patients aged 50–69 years in Germany, the US Preventive Services Task Force recommended screening without an upper age limit until 2009 when recommendations were limited to women below 75 years of age [16]. Thus, the comparisons of these two countries can provide important insights.

In Germany, cancer registration has been implemented on a federal state level and, therefore, the start and quality of cancer registration varies across these states. For years of diagnosis before around 1998, when only a few registries were implemented in Germany, data from the Saarland Cancer Registry, covering a population of about one million in southwest Germany, have often been used to estimate cancer incidence and survival for Germany in international studies such as EUROCARE [17]. For later years, data from selected federal states with sufficient data quality have been pooled in research studies [18] and by the German Centre for Cancer Registry Data (ZfKD) for national cancer statistics.
For this study, incidence and mortality estimates were provided from the Saarland cancer registry for 1975–2015. National mortality (1980–2015) and incidence estimates (1999–2015) were provided from the ZfKD. National incidence estimates were calculated based on the incidence in regions with high completeness and estimated incidence based on a mortality/incidence ratio method in regions with insufficient completeness.
For analyses on patient characteristics and survival, a dataset from the Saarland cancer registry was used for years of diagnosis 1974–1997. For 1998–2015, a pooled national dataset from the ZfKD was used, covering 49% of the total German population (39.8 million inhabitants in 2014). Data selection criteria are described in the Supplementary Methods.
For the US, data from the Surveillance, Epidemiology, and End Results (SEER) 9 database were used for all analyses [19,20]. SEER-9 covers 9.4% of the US population (29.0 million inhabitants in 2010).
Table S1 provides an overview on the included registries for analyses on patient characteristics and survival. Women aged ≥15 years or older with a first invasive BC (ICD-10: C50) and passive mortality follow-up until December 2015 were included. Cases notified by death certificate only (DCO) or autopsy only were excluded in all analyses on patient characteristics and survival.

Age was investigated for all patients aged ≥50 years and grouped following screening recommendations in Germany (50–69 and 70+ years) [15]. Morphology was grouped according to the WHO classification of breast tumors (Table S2). [21] Stage groups (I, II, III, IV) according to the 6th edition of the Union internationale contre le cancer (UICC) tumor, node, metastasis (TNM) classification were derived from the T, N, and M classification according to the TNM edition used at diagnosis. For US data, the breast adjusted American Joint Committee on Cancer (AJCC) 6th stage classification was used, whose stage groups are comparable to the derived German stage groups. Due to the large proportion of missing stage information in earlier years in Germany (>50%), stage information was only used for patients diagnosed in 1998–2015, with multivariable imputation of missing values by chained equation (details in the Supplementary Methods).Comparisons of stage distributions and five-year relative survival (RS) estimates before and after multiple imputation are shown in Tables S3 and S4, respectively.

Annual incidence and mortality estimates were computed for the populations of Saarland and Germany and the US for 1975–2015. Overall and truncated age-specific estimates were age-standardized using the US2000 standard population. Estimates for Saarland were averaged over three calendar years due to the small sample size.
Patient and tumor characteristics for 1974–2015 (all patients included in the analyses) and 2013–2015 (most recent period) were explored. Trends in stage distributions (1998–2015) are presented. Period analysis [22] was used to calculate five-year age-standardized (International Cancer Survival Standard, five age groups) [23] and age-specific RS. RS was calculated as the ratio of observed survival in cancer patients divided by expected survival derived by the Ederer II method [24] using life tables stratified by age, gender, calendar period, country, and, for the US, race as obtained from the German Federal Statistical Office [25] and the SEER program [26].
For all periods between 1979–1983 and 2013–2015, five-year age-standardized and age-specific RS for Germany and the US are reported. For Germany, for the periods 1979–1983 to 1999–2003 the Saarland Cancer Registry dataset was used to estimate RS, while the pooled national dataset was used from 2004–2006 to 2013–2015.
Five-year age-standardized RS stratified by stage were estimated for the periods 2004–2006 to 2013–2015. For the same periods, five-year RS estimates with additional standardization by stage were computed. The stage distribution in the US in 2013–2015 was used as weights for standardization.
All survival calculations were carried out with SAS software (version 9.3), using macros developed for period analysis. The US incidence and mortality rates were calculated using the software SEER*Stat.

2.4. Ethics Approval and Consent of Participate

The study was conducted in accordance with the Declaration of Helsinki, and the protocol was approved by the Ethics Committee of the Medical Faculty of Heidelberg (S-476/2013)

3.1. Trends in Incidence and Mortality

Our study showed that differences in incidence, mortality, and RS between the US and Germany mostly decreased over time for patients aged 50–69 years. However, strong and increasing differences in BC mortality were observed in women aged 70+ years, resulting in 45% higher mortality in Germany in 2013–2015. Our results do not suggest differences in cancer care, as stage-standardized survival was comparable in both countries. The observed differences might rather be related to the later uptake and less extensive utilization of mammography screening in Germany. Further studies are warranted to fully understand and overcome the comparably high BC mortality in the rapidly growing elderly population in Germany.

This work was supported by the German Cancer Aid (grant numbers: 108257, 110446). The funder had no role in the design, execution, interpretation, or writing of the study. 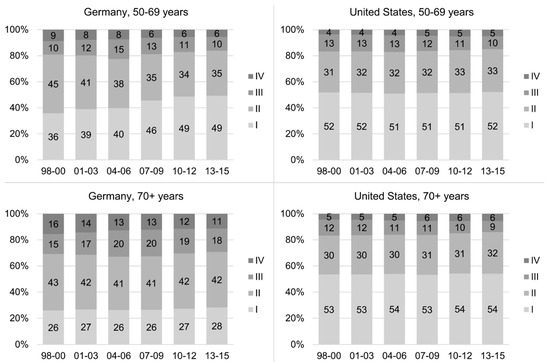 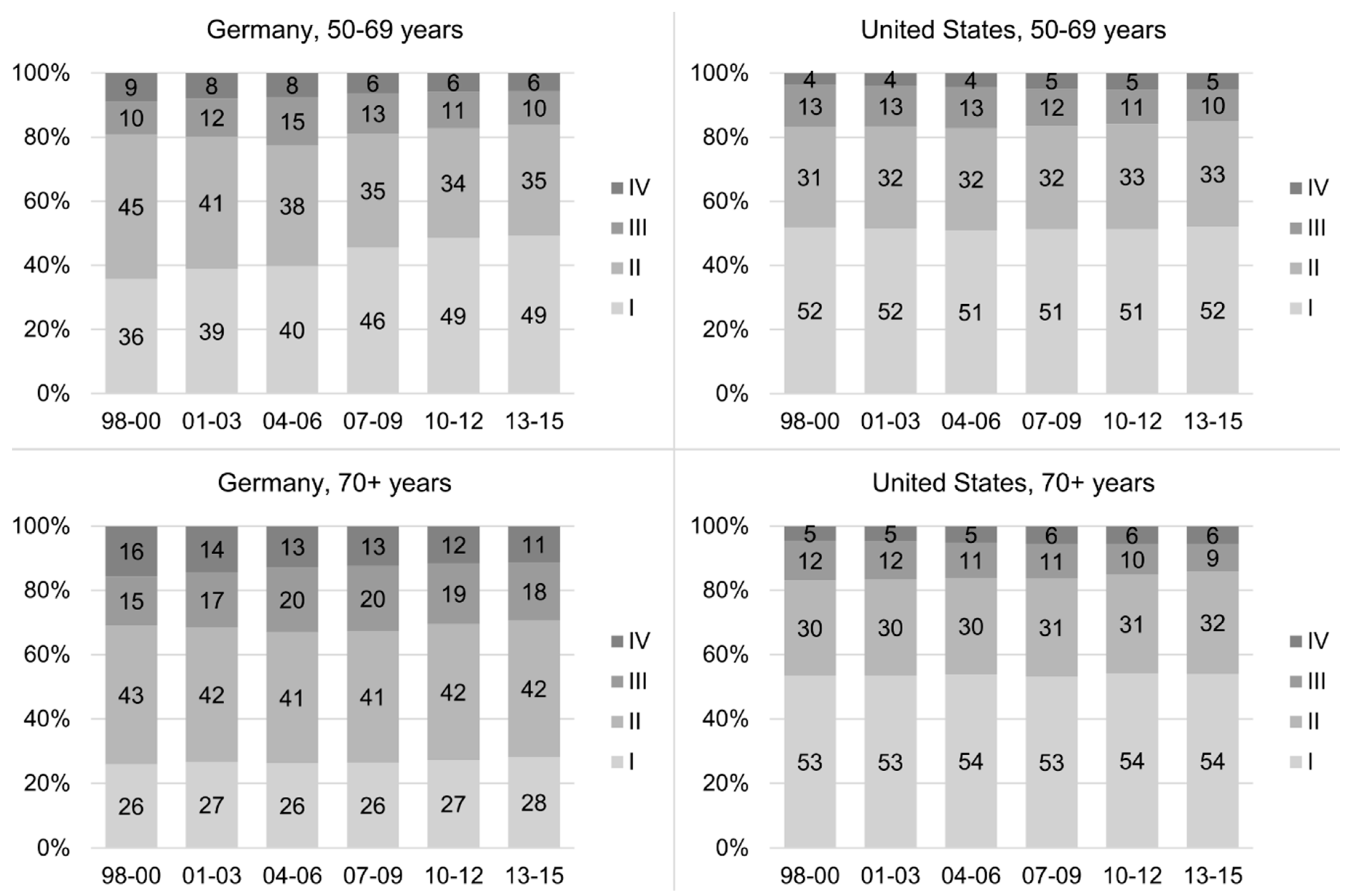 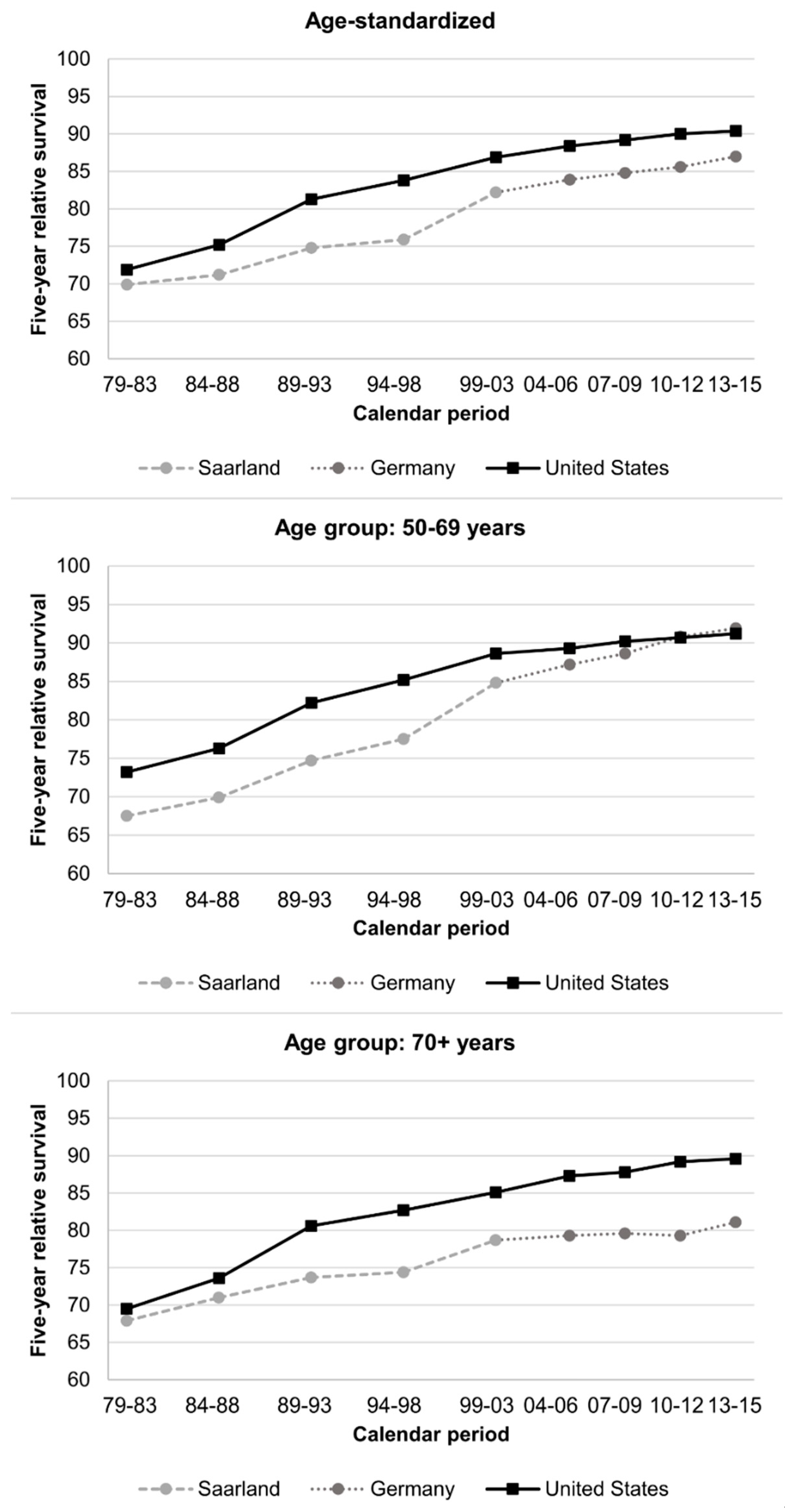 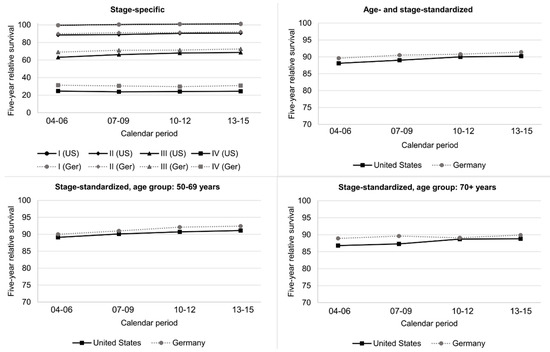 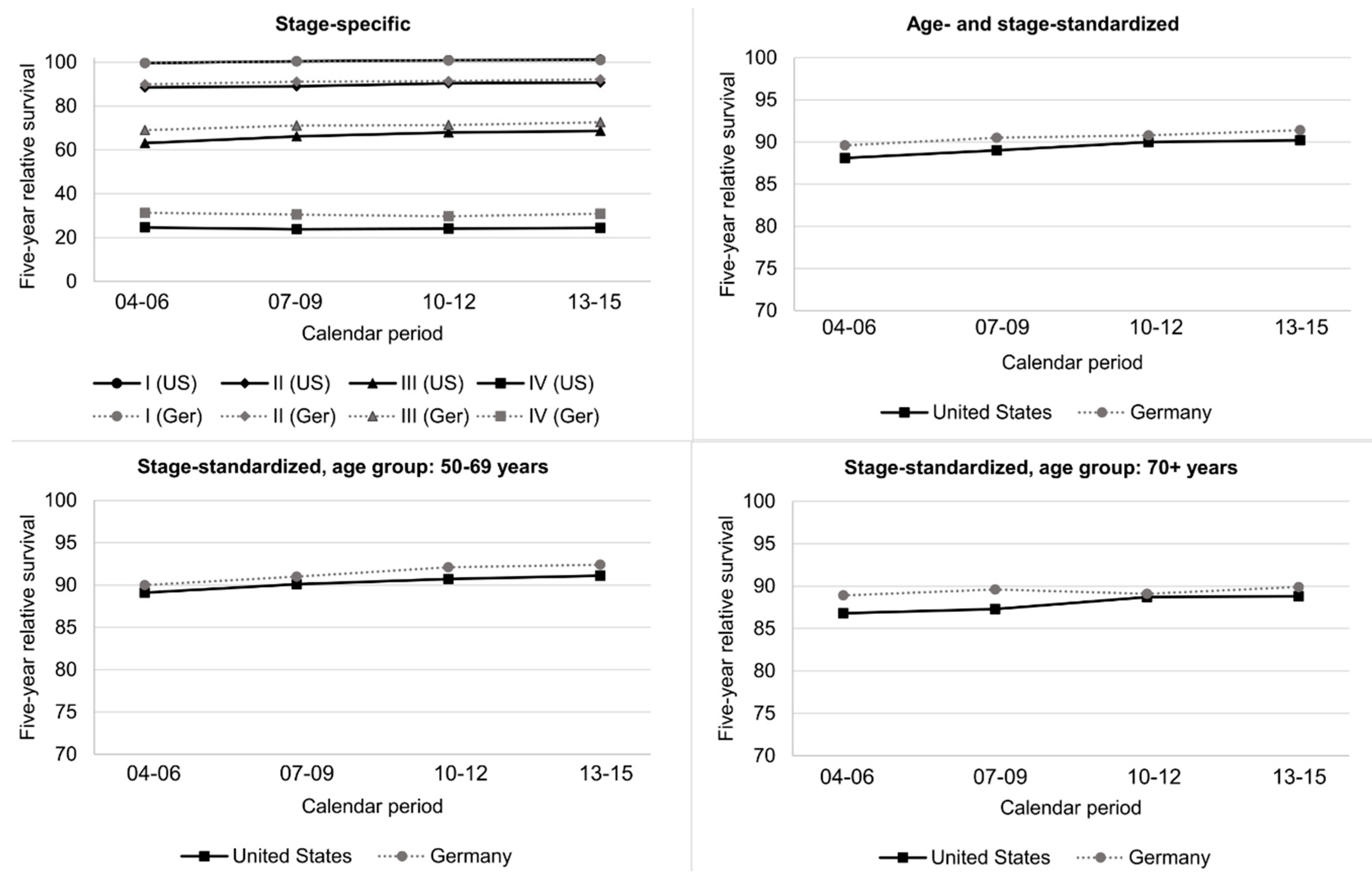