The eukaryotic translation initiation factor 4F complex (eIF4F) is a potential chemotherapeutic target in triple-negative breast cancer (TNBC). This complex regulates cap-dependent translational initiation and consists of three core proteins: eIF4E, eIF4G, and eIF4A1. In this study, we focus on repositioning compounds as novel inhibitors of eIF4A1-mediated translation. In order to accomplish this goal, a modified synthetic reporter assay was established. More specifically, a (CGG)4 motif, which confers eIF4A dependency, was incorporated into the 5’-leader region of a luciferase-tdTomato lentiviral reporter construct. The Prestwick Chemical Library was then screened in multiple TNBC cell lines by measuring the tdTomato fluorescent intensity. We identified several cardiac glycosides as potential inhibitors of eIF4A1-mediated translation. Based on our studies, we find that cardiac glycosides inhibit the expression of eIF4A1. To identify a potential mechanism by which this was occurring, we utilized the Integrative Library of Integrated Network-Based Cellular Signatures (iLINCS). Our pursuits led us to the discovery that cardiac glycosides also decrease levels of c-MYC. Quantitative PCR confirmed that decreases in c-MYC and eIF4A were occurring at the transcriptional level. As such, disruption of the eIF4A1-c-MYC axis may be a viable approach in the treatment of TNBC. The novel combination of rocaglamide A and digoxin exhibited synergistic anti-cancer activity against TNBC cells in vitro. The findings in this study and others are important for formulating potential combination chemotherapies against eIF4A1 in vivo. Thus, drug repositioning may be one classical approach to successfully target eIF4A1 in TNBC patients. View Full-Text
Keywords: eIF4A1; c-MYC; digoxin; bufalin; rocaglamide A; TNBC; repurposing; repositioning eIF4A1; c-MYC; digoxin; bufalin; rocaglamide A; TNBC; repurposing; repositioning
►▼ Show Figures 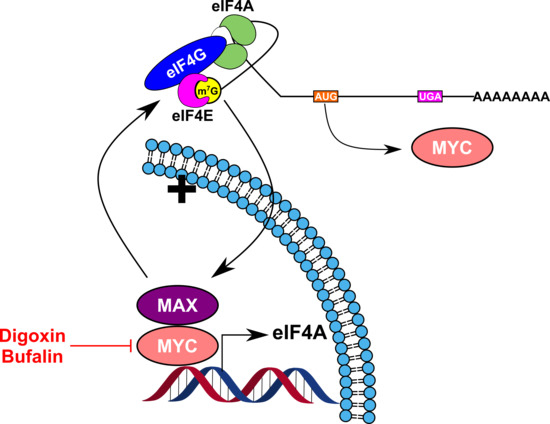