Treatment using light-activated photosensitizers (photodynamic therapy, PDT) has shown limited efficacy in pigmented melanoma, mainly due to the poor penetration of light in this tissue. Here, an optical clearing agent (OCA) was applied topically to a cutaneous melanoma model in mice shortly before PDT to increase the effective treatment depth by reducing the light scattering. This was used together with cellular and vascular-PDT, or a combination of both. The effect on tumor growth was measured by longitudinal ultrasound/photoacoustic imaging in vivo and by immunohistology after sacrifice. In a separate dorsal window chamber tumor model, angiographic optical coherence tomography (OCT) generated 3D tissue microvascular images, enabling direct in vivo assessment of treatment response. The optical clearing had minimal therapeutic effect on the in control, non-pigmented cutaneous melanomas but a statistically significant effect (p < 0.05) in pigmented lesions for both single- and dual-photosensitizer treatment regimes. The latter enabled full-depth eradication of tumor tissue, demonstrated by the absence of S100 and Ki67 immunostaining. These studies are the first to demonstrate complete melanoma response to PDT in an immunocompromised model in vivo, with quantitative assessment of tumor volume and thickness, confirmed by (immuno) histological analyses, and with non-pigmented melanomas used as controls to clarify the critical role of melanin in the PDT response. The results indicate the potential of OCA-enhanced PDT for the treatment of pigmented lesions, including melanoma. View Full-Text
Keywords: melanoma; photodynamic therapy; optical clearing agent melanoma; photodynamic therapy; optical clearing agent
►▼ Show Figures 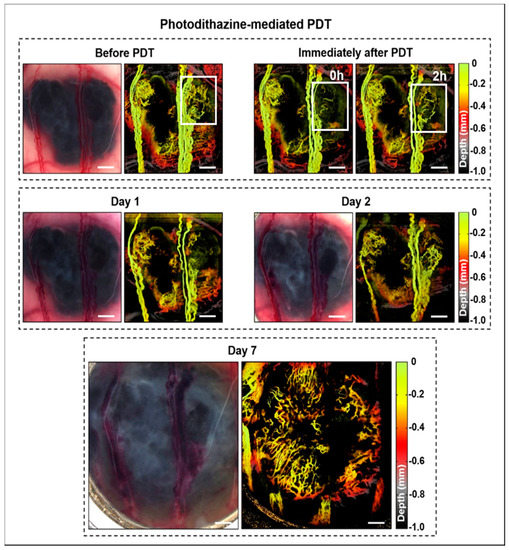