In early stage (cT1-2N0) oral squamous cell carcinoma (OSCC), 20–30% of the patients are diagnosed with occult metastases despite advances in imaging modalities [1,2,3,4]. Conventionally, early stage OSCC patients underwent either watchful waiting or an elective neck dissection (END) for neck staging [5,6]. A recent study showed favorable survival rates for patients who underwent END compared to watchful waiting irrespective of the infiltration depth [7]. However, in this study, the incidence of occult lymph node metastases was up to 45%, suggesting a less accurate diagnostic workup and a different target group, which may hamper generalizability of their results [8]. In the last decade, sentinel lymph node biopsy (SLNB) was introduced in OSCC as a less invasive alternative with lower morbidity rates compared to an END [9]. In early stage OSCC, the most recent meta-analysis reported a pooled sensitivity of 87% and a pooled negative predictive value of 94% for the SLNB procedure in detecting occult metastasis [10].
Because of the low invasiveness and high accuracy rates, the SLNB procedure is implemented in many national head and neck guidelines. In the Netherlands, head and neck oncology care is centralized and the majority of these head and neck cancer institutions use SLNB for staging the clinically node-negative neck in early stage OSCC patients [11,12,13]. Despite the implementation in guidelines, the END is still the staging strategy in early stage OSCC in the majority of medical centers worldwide, even in developed countries with well-organized health care [14]. Cramer et al. showed that SLNB is rarely utilized (<5%) in suitable cases in the United States [15].
Both the END and SLNB have clinically relevant limitations. A pivotal disadvantage of an END is the overtreatment of 70 to 80% of the patients with a more invasive procedure [16]. Several studies reported the differences in complication rates, postoperative morbidity and cost-effectiveness in favor of the SLNB compared to the END procedures [17,18,19,20,21,22]. Conversely, a significantly lower accuracy for SLNB in floor-of-mouth OSCC is reported and is caused by the “shine through phenomenon” [11,12,23,24,25]. This refers to a situation in which the sentinel node is not identified when it is within the flare of radiation from the primary tumour site (Figure 1). The ultimately necessary comparison, e.g., a randomized clinical trial, between the staging accuracy of END versus SLNB is currently not available.
This study presents the accuracy in staging of the cN0 neck and survival rates of both END and SLNB in two large retrospective cohorts. Patients of both cohorts are collected in the same dedicated head and neck centers.

In total, 390 (44%) END patients and 488 (56%) SLNB patients were used for analysis. Patient and tumour characteristics are given in Table 1. The END cohort contained a higher rate of pT2 tumours (51%) compared to the SLNB cohort (23%) (p < 0.001). The anatomical locations differed between the two groups, with more floor-of-mouth (FOM) tumours (34% vs. 27%) and less tongue tumours (50% vs. 62%) in the END cohort (p = 0.007). END-treated patients were significantly more often treated with postoperative radiotherapy (34% vs. 11%, p < 0.001).
The overall sensitivity of detecting occult metastasis was comparable between the END and SLNB patients (84% vs. 81%, p = 0.612). Both groups had similar negative predictive values (NPVs) (93%, p = 1.000) (Table 2). Because of dissimilarity in pT staging, we separately analysed the accuracy for pT1 and pT2. In the SLNB cohort, a trend towards a higher though not significantly different sensitivity was observed for pT2 tumours compared to pT1 tumours (88% vs. 76%, p = 0.075). In the END cohort, pT2 tumours also showed a higher sensitivity in comparison to pT1 tumours (90% vs. 70%, p = 0.010). NPVs did not differ significantly regarding pT stage within the groups. No significant differences were found for sensitivity and NPV between the SLNB and END when corrected for pT stage (Table 2).

The regional Recurrence Free Survival (RRFS) of END and SLNB patients divided by T stage showed no significant differences between both groups (Figure 2E). However, when comparing the RRFS for the END and SLNB groups divided by anatomical location (FOM vs. other anatomical locations), a significantly shorter RRFS was observed for the SLNB FOM group as compared to the END FOM group (88% and 97%, p = 0.008, (p = 0.048 Bonferroni corrected) Figure 2F).

2.4. Additional Metastasis in the MRND After a Positive SLNB

A histopathologically positive SLNB was found in 107 of the 488 patients (22%). Isolated tumour cells (ITCs) were detected as the largest metastatic deposit in SLNB in 15 patients (14%), micrometastasis (MiM) was detected in 31 patients (29%) and macrometastasis (MaM) was detected in 61 patients (57%). A positive SLNB was followed by an additional (selective) neck dissection in 86% of the patients (92/107). Five patients refused any additional treatment (1 × MiM and 4 × MaM), and the remaining 10 patients received additional radiotherapy instead of a neck dissection. Radiotherapy was required for primary tumour control in 5 cases (2 × ITC, 1 × MiM and 2 × MaM) and was therefore extended to the neck. In 4 cases (1 × MiM and 3 × MaM), radiotherapy was initiated because of 2 or more positive sentinel lymph nodes (SLNs) or extra-nodal extension, and in 1 patient (MiM), extensive surgery was not considered feasible due to major comorbidities. None of these 10 patients developed regional recurrences during follow-up.
Additional non-SLN metastases were found in the neck dissection specimen in 21% of the patients (19/92) with a therapeutic neck dissection after SNLB. Of these patients, the majority (17/19, 90%) had MaM in the SLN as a largest tumour deposit. Patients had a very low risk of having additional metastases if the SLN contained ITCs (8%, 1/13) or MiM (4%, 1/27) compared to MaM (33%, 17/52) (Table 3, p = 0.005).
Disease-specific survival per size of metastasis (ITC, MiM and MaM) did not reach significance, although a trend between ITC and MaM was observed (p = 0.091, Bonferonni corrected p = 0.182).

Patients were included from five Dutch head and neck centers that are now all performing SLNB as the standard diagnostic modality for early stage OSCC. Patients were included if they were treated between 1990 and 2015 for the END cohort and between 2007 and 2018 for the SLNB cohort. The overlap in years of treatment (2007–2015) between END and SLNB is caused by the different times of introduction of the SLNB procedure in individual hospitals involved in this study. To keep the cohorts as homogeneous as possible, END patients were collected in the same centers and were treated before these centers introduced the SLNB. Consequently, the END cohort provided longer follow-up with respectively a median follow-up of 4.5 (interquartile range (IQR) 2.5 to 7.3) years versus 2.2 (IQR 1.0 to 4.1) years (p < 0.001). Tumours are classified according to the 7th TNM classification system. All clinical and histopathological data were retrospectively collected from the electronic patient files. Information regarding SLN location and pathological LN assessment in both END and SLNB are listed prospectively and standardised as part of the daily clinical practice in the participating centers. All patients were staged as cN0 by palpation and imaging (ultrasound, CT and/or MRI). In the case of suspected lymph nodes, ultrasound-guided fine needle aspiration cytology was performed.
The SLNB procedure was performed according to the European Association of Nuclear Medicine/Sentinel European Node Trial joint practice guidelines and has been described extensively before by some of the participating institutions [11,12,42]. The procedure corresponds with the recommendations in the guidelines from the 2018 SLNB consensus conference held in London [31,43]. Shortly, the procedure consists at least of three modalities: preoperative visualization of SLNs (using peritumoural injections of (99mTc)Tc-nanocolloid) with planar dynamic and static lymphoscintigraphy, including single photon emission computed tomography and computed tomography (SPECT/CT) scanning, in a one or two day protocol; intraoperative detection and extirpation of SLNs performed using a handheld gamma probe; and harvested SLNs assessed using step-serial sectioning with haematoxylin and eosin staining and additional keratin staining [42]. Metastasis were classified as isolated tumour cells (ITC) (size ≤ 0.2 mm), micrometastasis (MiM) (size > 0.2 mm and ≤ 2 mm) or macrometastasis (MaM) (size > 2 mm) according to Hermanek et al. [44]. SLNB-negative patients had a watchful waiting strategy as reference, while SLNB-positive patients were treated by neck dissection and/or radiotherapy on the neck. In the case of a negative SLNB, patients followed a strict follow-up regimen; patients visited our outpatient clinic in the first year every 2 months, in the second year every 3 months, in the third year every 4 months, and in the fourth and fifth years every 6 months.
The END cohort consisted of early stage OSCC patients with a (selective (level I-III/IV) or modified radical) neck dissection as part of the primary treatment. Data of these END patients were available in 4 of the participating centers. In these centers, END was the first choice over watchful waiting when tumour depth of invasion was estimated as above 4 mm [5,6,45]. In 2 centers, frozen sections of one or two clinically most suspicious lymph nodes were routinely assessed intraoperatively during END, and in the case of a detected metastasis, the END was converted to a therapeutic modified radical neck dissection (MRND). In the case of negative fresh frozen material, only level I–III ENDs were performed with postoperative lymph node assessment using conventional haematoxylin and eosin staining on formalin-fixed paraffin-embedded tissue.

The study was conducted in accordance with the Declaration of Helsinki, and the protocol was approved by the Ethics Committee of UMC Utrecht (no. 17/766). The Internal Review Board waived the requirement for the investigator to obtain signed consent forms for all subjects. All samples and data were handled according to the General Data Protection Regulation.

Categorical data are given with N and percentage using the Fisher’s exact test and Chi-square test to analyse differences. The Mann–Whitney U (skewed distribution) and Student’s t-test (normally distributed) were used for continuous data and are given with respectively the median and interquartile range (IQR) and the mean with the standard deviations (SD). True positives (TP), true negatives (TN) and false negatives (FN) are defined as respectively pN+ (TP), pN0 without (TN) and pN0 with (FN) detection of a regional recurrence after primary treatment. The Kaplan–Meier method and log-rank test was performed for survival analysis (disease-specific survival (DSS) and regional recurrence free survival (RRFS)). Five-year DSS was defined as the time from treatment till death or last clinical visit. Deaths caused by the early stage OSCC within five years after treatment were counted as an event. Five-year RRFS was defined as the time from treatment till regional recurrence without local disease or last clinical visit. Regional recurrences without local disease and within five years after treatment were counted as events for the RRFS. Regional recurrences with presence of local recurrence or second primary tumours were excluded. A Bonferroni correction was used for log-rank tests for multiple testing and was defined by multiplying each p-value by the total number of comparisons. A value of p < 0.05 was considered statistically significant. All statistical tests were analysed using IBM SPSS Statistics 23 for Windows (Statistical Package for the Social Sciences, Inc., Chicago, IL, USA).

In conclusion, detection of lymph node metastases in oral cancer using sentinel lymph node biopsy is as accurate as elective neck dissection, except for floor-of-mouth tumours. SLNB showed higher disease-specific survival rates as compared to the END, also after stratifying for different pT stages or anatomical locations. As randomized controlled trials comparing the accuracy of SLNB with the routinely used END are currently lacking, this retrospective cohort study provides the highest evidence of the effectiveness of SLNB in oral cancer.

This study was financially supported by SpePharm A.G.—part of the Norgine Group of companies, Amsterdam, The Netherlands.

The authors thank Laura Smit, (Department of Pathology, the Netherlands Cancer Institute, Amsterdam) for revision of the pathology reports. 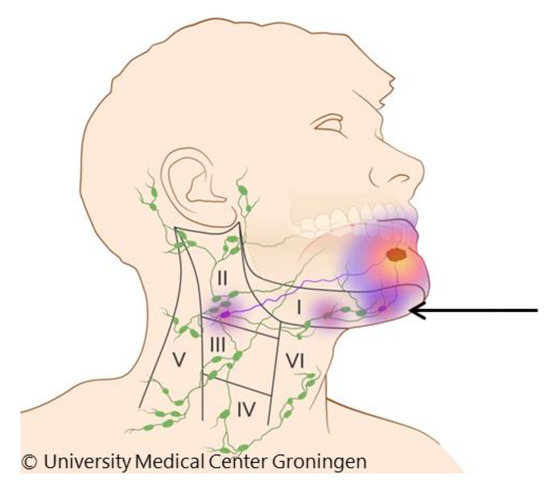 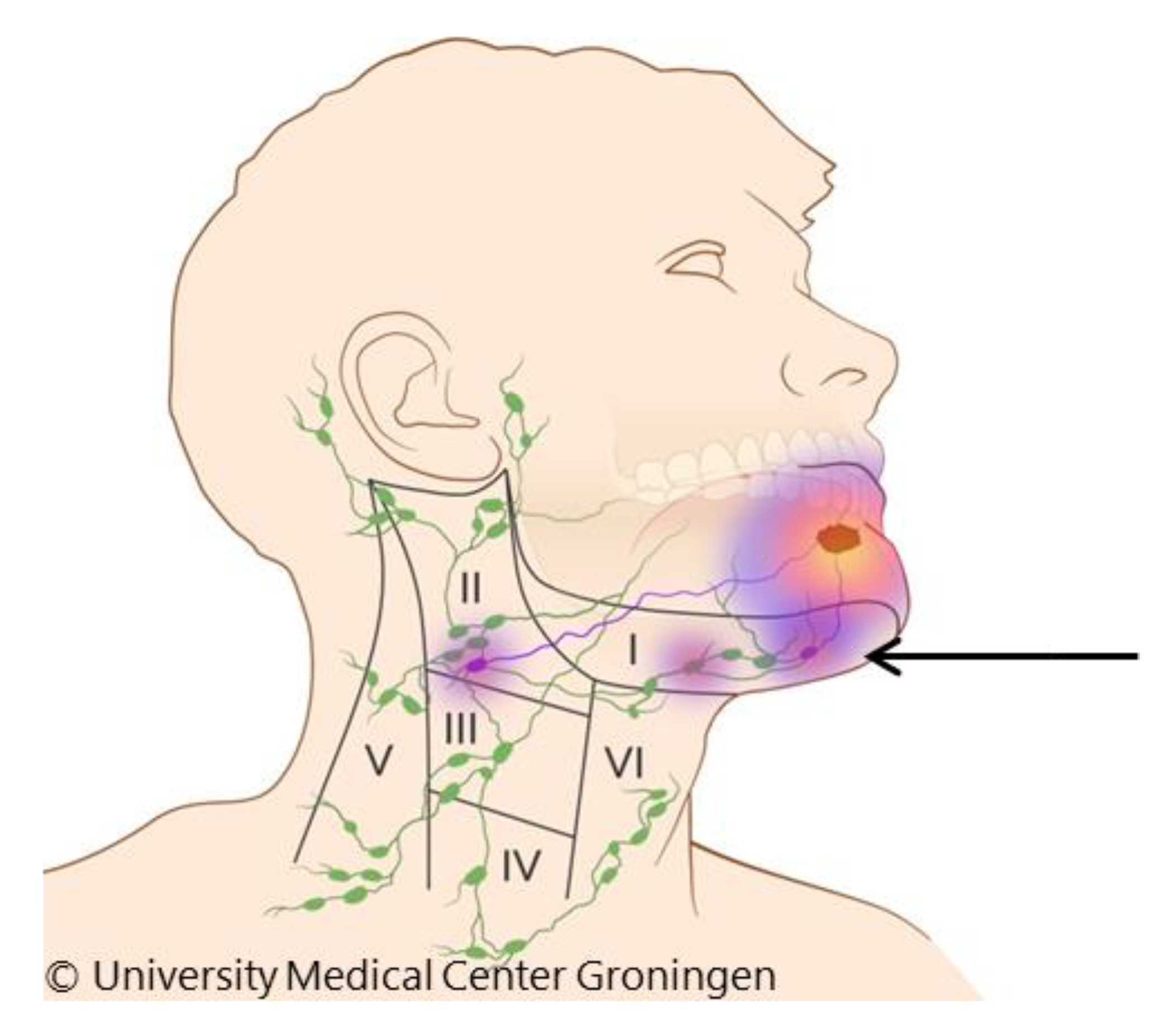 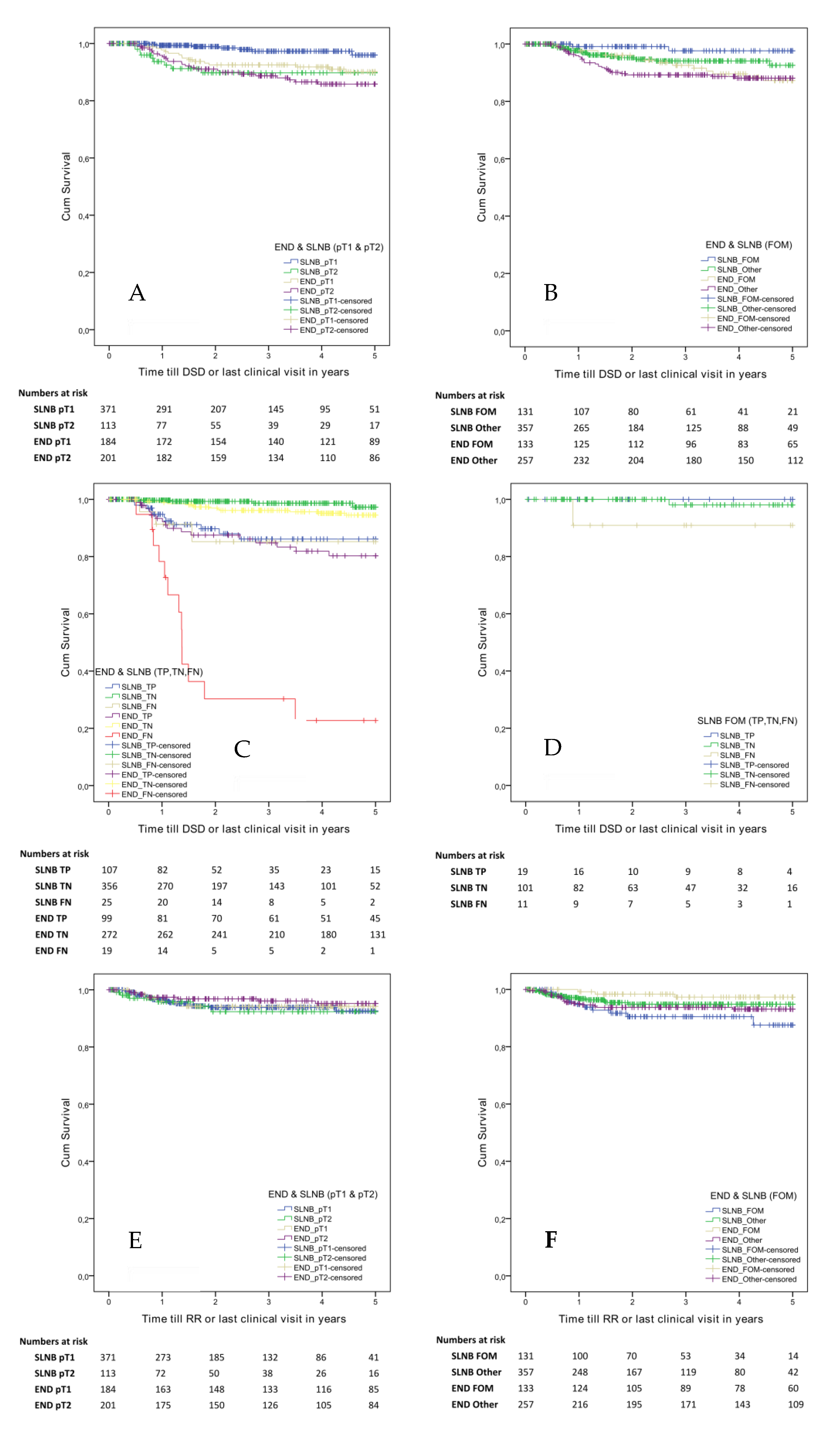