Ceramide synthase 5 is one of six enzymes that catalyze the production of ceramides from sphingosine or sphinganine. Ceramides are important components of cell membranes and act as signaling molecules. Previously it has been shown that ceramide synthase 6 and 2 influence colitis in several animal models with sometimes opposite effects. Here, we investigated the disease course of dextran sodium sulfate-induced acute colitis and azoxymethane/dextran sodium sulfate-induced colitis-associated colon cancer in mice with global ceramide synthase 5 knockout (CerS5-ko) or with ceramide synthase 5 knockout restricted to the colon epithelium (CerS5fl/fl VilCre). We monitored disease development and analyzed colon barrier function as well as the immune cell status in these mice. CerS5-ko mice but not CerS5fl/fl-VilCre mice were more susceptible to acute and chronic inflammation. However, the cell barrier function of colon epithelial cells was not disturbed by downregulation of ceramide synthase 5. Instead, untreated CerS5-ko mice displayed reduced numbers of CD3+ immune cells in the spleen, colon, and blood, especially of intraepithelial CD8+ T-cells, which was not obvious in CerS5fl/fl Vil Cre mice. Reduced T-cell number in colon tissue of CerS5-ko mice was accompanied by a reduced expression of IL-1β, IFNγ, and IL-4. In vitro investigations revealed that knockdown of ceramide synthase 5 in T-cells impaired T-cell activation. In summary, we show that CerS5-ko mice were more susceptible to dextran sodium sulfate-induced colitis and azoxymethane/dextran sodium sulfate-induced colitis-associated colon cancer. A reduced number of T-cells in the colon epithelium that was already the case in untreated CerS5-ko mice might have contributed to this effect. View Full-Text
Keywords: colitis; DSS; CerS; T-cell; TEER; ceramide; colon; cancer colitis; DSS; CerS; T-cell; TEER; ceramide; colon; cancer
►▼ Show Figures 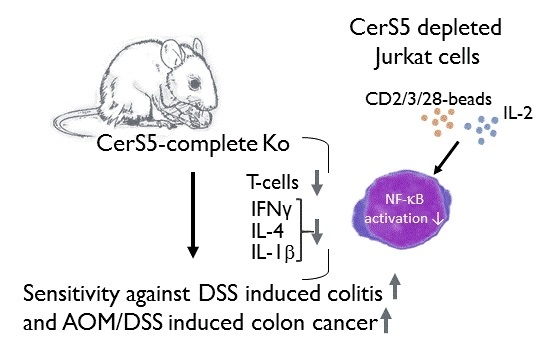