Fungal Gut Microbiota Dysbiosis and Its Role in Colorectal, Oral, and Pancreatic Carcinogenesis

The association between bacterial as well as viral gut microbiota imbalance and carcinogenesis has been intensively analysed in many studies; nevertheless, the role of fungal gut microbiota (mycobiota) in colorectal, oral, and pancreatic cancer development is relatively new and undiscovered field due to low abundance of intestinal fungi as well as lack of well-characterized reference genomes. Several specific fungi amounts are increased in colorectal cancer patients; moreover, it was observed that the disease stage is strongly related to the fungal microbiota profile; thus, it may be used as a potential diagnostic biomarker for adenomas. Candida albicans, which is the major microbe contributing to oral cancer development, may promote carcinogenesis via several mechanisms, mainly triggering inflammation. Early detection of pancreatic cancer provides the opportunity to improve survival rate, therefore, there is a need to conduct further studies regarding the role of fungal microbiota as a potential prognostic tool to diagnose this cancer at early stage. Additionally, growing attention towards the characterization of mycobiota may contribute to improve the efficiency of therapeutic methods used to alter the composition and activity of gut microbiota. The administration of Saccharomyces boulardii in oncology, mainly in immunocompromised and/or critically ill patients, is still controversial. View Full-Text
Keywords: mycobiota; colorectal cancer; oral cancer; pancreatic cancer; gut microbiota; Saccharomyces boulardii mycobiota; colorectal cancer; oral cancer; pancreatic cancer; gut microbiota; Saccharomyces boulardii
►▼ Show Figures 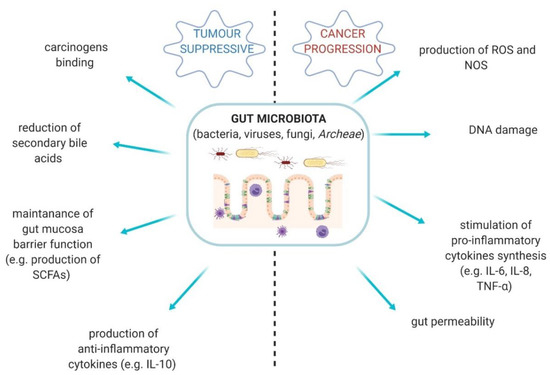