Despite the improvement in survival for patients with liver cancer (LCa) in recent decades, only one in five patients survive for 5 years after diagnosis. Thus, there is an urgent need to find new treatment options to improve patient survival. For various cancers, including LCa, the chemokine CCL5 (RANTES) facilitates tumor progression and metastasis. Since the function of the CCR5/CCL5 interaction in LCa cell proliferation and migration is poorly understood, the present study was undertaken to investigate the role of the CCR5/CCL5 axis in these processes. Flow cytometry, RT-PCR, Western blot, and immunofluorescence techniques were used to quantify the expression of CCR5 and CCL5 in LCa cells. To determine the biological significance of CCR5 expressed by LCa cell lines, a tissue microarray of LCas stained for CCR5 and CCL5 was analyzed. The results showed higher expression (p < 0.001) of CCR5 and CCL5 in hepatocellular carcinoma (HCC) tissues compared to non-neoplastic liver tissues. Furthermore, to delineate the role of the CCR5/CCL5 interaction in LCa cell proliferation and migration, various LCa cells were treated with maraviroc, a CCR5 antagonist, in the presence of CCL5. These data demonstrated the biological and clinical significance of the CCR5/CCL5 axis in LCa progression. The targeting of this axis is a promising avenue for the treatment of LCa. View Full-Text
Keywords: hepatocellular carcinoma; CCR5; CCL5; maraviroc; EMT hepatocellular carcinoma; CCR5; CCL5; maraviroc; EMT
►▼ Show Figures 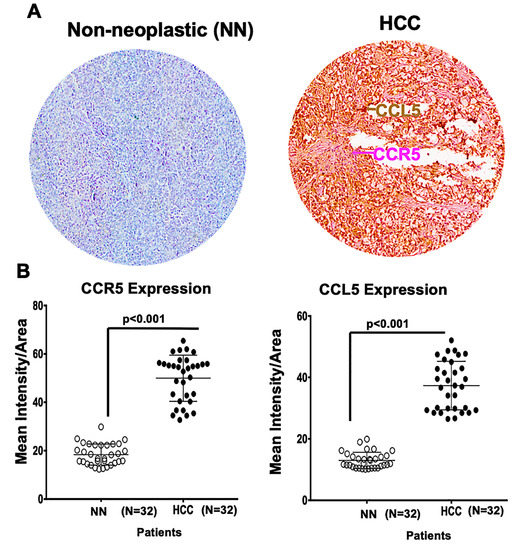