Epigenetics of SFRP1: The Dual Roles in Human Cancers

Breast cancer is the most commonly diagnosed malignancy in women [1]. Medical advances and increased public awareness have enabled earlier diagnosis and treatment of breast cancer in developed countries [2,3]. Early breast cancer diagnosis is generally associated with a good prognosis; however, given its high incidence there is still a significant number of relapses [4,5,6]. Thus, the development of new prognostic tools for early cases is equally as important as for those with unfavourable prognosis.
A promising subset of prognostic biomarkers are tumour-associated macrophages (TAMs). According to a commonly utilised model there are two main phenotypes of macrophages, M1 and M2. M1 polarised macrophages primarily engulf and destroy pathogens with reactive oxygen and nitrogen species. In contrast, M2 macrophages remove cell debris and initiate repairs in their surroundings through the release of growth factors like EGF, VEGF and TGF-β. M1 and M2 macrophages cooperate in the control and execution of local immune responses [7,8]. Malignant tumours can modulate this balance by influencing macrophage subsets through a variety of mechanisms. Tumour cells can release chemokines like CSF-1 and IL-4, which induce macrophage transformation into M2-like polarised TAMs [9,10]. M2-like TAMs use their healing and growth inducing properties to promote tumour progression, angiogenesis and metastasis [11,12,13,14]. Simultaneously they suppress the initiation of an antitumoural immune response by the host [15,16,17]. With this in mind, it is not surprising that high numbers of TAMs are associated with a less favourable outcome in many forms of cancer, including breast cancer [18]. M1 macrophages on the other hand are considered to be a cytotoxic “anti-tumour” phenotype in the tumour microenvironment [19].
Our understanding of the association of TAMs and survival is currently limited and incomplete. A number of studies have demonstrated the unfavourable prognostic influence of M2-like TAMs [20,21], while more recent works have begun to emphasise the positive impact of M1-like TAMs on survival [22,23]. So far, there have been no reports on the combined influence of both macrophage phenotypes and long-term breast cancer progression.
To explore the effects of the two main macrophage phenotypes on breast cancer prognosis, we studied a carefully preselected and therefore homogenous cohort of patients whom participated in the accelerated partial breast irradiation (APBI) phase II trial at the University Hospital Erlangen [24]. M1 and M2 macrophage densities from pre-radiation therapy (RT) tumour resection samples were analysed and compared to disease-free survival (DFS) and in-breast recurrence-free survival (IBRFS). For the first time, we were able to create a prognostic model that combined cell densities of both macrophage phenotypes. This revealed new information on the use of TAMs as prognostic biomarkers for early breast cancer.

In the early stage breast cancer cohort of 136 patients (Table 1) DFS was 85% while IBRFS was 92% after a 12 year follow up period (Figure 1A). Double immunostainings for CD68 and CD163 antigens were applied to pre-RT tissue samples from four locations: central tumour (CT), invasive front (IF), normal tissue taken from tumour proximity (prox) and normal tissue that was sampled distant from the tumour (dist). Numbers of infiltrating macrophages as well as the size of the intraepithelial and stromal compartments were quantified in each TMA core (Figure 1B). Subsequently in the stromal and intraepithelial compartments, cell densities for M1 and M2 polarised macrophages were calculated separately from four independent locations (Figure 1C). M1 macrophages were represented by cells that were exclusively positive for CD68. Cells that were positive for both CD68 and CD163 were considered to be M2 polarised (Figure 1D).

2.4. Influence of M-Shifts on Survival

The stromal M-shift model at IF (Figure 2E) did not show a distinction between “M1-shifted” and “non-shifted” cases. Both groups exhibited a 12 yr DFS of over 90%. In comparison, the “M2-shifted” cohort showed an unfavourable prognosis with a dramatically reduced 12yr DFS of 68%. The M-shift model was a significantly better predictor of DFS than the respective macrophage phenotypes used as single markers (M1 and M2 showed a 12yr DFS of 77% and 80%, respectively). The intraepithelial model resulted in three survival groups (Figure 2F). The “M1-shifted” group had a 12 yr DFS of 100%, while the “M2-shifted” cohort had a 12 yr DFS of only 68%. “Non-shifted” cases settled in between those two groups and had a 12 yr DFS of 85%. The M-shift model was again better than macrophage counts alone at predicting recurrence or metastasis (M1: 12 yr DFS 80%; M2: 12 yr DFS: 74%). Samples from CT had comparable prognostic power (Figure 3A,C) but overall macrophage shifts at IF correlated more strongly with DFS.
To make this combined model more comparable to other parameters, it was simplified into two prognostic groups. “M2-shifted” remained while “M1-shifted” and “non-shifted” were merged (Figure 3B,D; Supplementary Figure S3A,B). Table 3 summarises group sizes, 12 yr DFS and IBRFS and p-values. A model that was based on M1/M2 cell density ratios was also explored, but not included as it was less accurate at predicting DFS. Comparing the IF intraepithelial M-shift model subgroups, statistically significant differences in M1 and M2 macrophage cell densities were observed (p < 0.05) (Figure 3E). M2 densities were at the lowest in “M1-shifted” and this value rose from “non-shifted” to “M2-shifted”. For M1 macrophages the opposite was the case, with “M1-shifted” registering the highest cell densities. Stromal cell distributions did not differ (Supplementary Figure S3C,D). Multivariate analyses revealed the stromal (p = 0.01) and intraepithelial TAM shift classification at IF (p = 0.039) to be independent risk factors for DFS (Table 4).
The proliferation index Ki67 was the strongest conventional prognostic parameter in this study population. In a direct comparison, the M-shift model was superior at predicting DFS and IBRFS. (Figure 4A–F). No statistically significant correlations between macrophage shift classifications and clinicopathological characteristics were discovered (Table 5).

A total of 136 patients were treated for early stage breast cancer at the Universitätsklinikum Erlangen between 2000 and 2005 as part of a prospective APBI phase II trial. APBI was performed with interstitial multicatheter brachytherapy. Inclusion criteria of this study were histopathologically assured invasive breast carcinoma of any histology of ≤3 cm in diameter, unifocal and unicentric breast cancer, clear resection margins of at least 2 mm in any direction, hormone sensitivity (ER+/PR+, ER+/PR−, ER−/PR+), histologic grading of 1 or 2, no lymph vessel and no blood vessel invasion, pN0/pNmi, no distant metastases and age ≥35 years [24,27]. All patients received breast conserving surgery and brachytherapy. Additionally, 115 patients (84.6%) were treated with hormonal therapy, two (1.5%) with chemotherapy and seven (5.1%) received both treatments. Clinical data and pathological characteristics that were prospectively collected during the APBI study can be found in Table 1. Tissue samples were obtained from tumour resections prior to RT. After a 12 year follow up period, breast cancer specific survival was 99%. Disease-free survival (DFS), which was defined as survival without local recurrence or distant metastasis, was 85% while the in-breast recurrence-free survival rate was 92% (Figure 1A). Two out of a total of 12 in-breast recurrences were exclusively classified as in-field recurrences. The remaining 10 recurrences were characterized by diffuse infiltration of the whole breast or in-field/out-of-field classification was not possible.
Written informed consent was obtained “front door” from all patients for collection of their tissue and clinical data. The use of formalin fixed paraffin-embedded material from the Archive of the Institute of Pathology was approved by the Ethics Committee of the Friedrich-Alexander-University of Erlangen-Nuremberg on 24 January 2005 (21_ 19 B), waiving the need for consent for using the existing archived material.

Four tissue microarrays (TMAs) each with a diameter of 2mm per core were processed from 136 paraffin-embedded tumour resections (Figure 1B). Samples were taken from the central tumour (CT), the invasive front (IF), normal tissue in tumour proximity (prox) and normal tissue distant from the tumour (dist). Then, 2 µm tissue sections were de-paraffinised in xylene and rehydrated with graded ethanol. Double staining for CD68 and CD163 was performed using the Alkaline phosphatase detection kit (POLAP-100, Zytomed Systems GmbH, Berlin, Germany) with Fast red (Sigma-Aldrich, Deisenhofen, Germany) as chromogen for CD163 and Fast blue (Sigma-Aldrich) as chromogen for CD68 detection [40].
Stained TMAs were scanned with a high throughput scanner (Mirax Scan, Zeiss, Göttingen, Germany). The software Pannoramic Viewer (3D Histech, Budapest, Hungary) was used for further processing of the scans. In 132 out of 136 IF samples, stromal tissue could be identified (97%) while 127 contained epithelium (93%). For biopsies from CT, these numbers were 123 (90%) and 119 (88%), respectively. The majority of these discrepancies can be explained by samples which only consisted of stromal or epithelial tissue. Another factor to account for this discrepancy was loss of material during the staining process.
Biopsies of normal breast tissue often contained very little tissue or mostly fat. In normal tissue (prox) samples, cells could be counted in the stromal compartment in 93 (68%) cases while 72 (53%) contained epithelium. For normal tissue (dist) these numbers were 116 (85%) and 96 (71%), respectively. Intrinsic breast cancer subtypes were classified according to the definitions released by the St Gallen International Expert Consensus on the Primary Therapy of Early Breast Cancer [41]. The cut-off point for Ki67 was based on results by Fasching et al., which described Ki67 expression levels ≥20% as an unfavourable prognostic factor in early breast cancer [42].

SPSS version 26 (IBM Inc., Chicago, IL, USA) was used for all statistical analyses. Spearman’s Rho and Fisher’s exact test were used to find correlations. Mean values of cell densities in different tumour locations and subgroups were compared using Student’s t-test for independent samples and Welch’s test. Optimal cut-off points for macrophage density groups (low vs high) were determined for disease-free survival (DFS) and in-breast recurrence-free survival (IBRFS) through receiver operating characteristic (ROC) curve analysis. Survival curves for DFS and IBRFS were plotted using the Kaplan–Meier method and compared with the log-rank test. Cox proportional hazards model was used to calculate hazard ratios of macrophage cell densities and clinicopathological characteristics. Covariates with p < 0.25 in univariate analysis were included in multivariate Cox regression. The proportional hazards assumption was tested by visual inspection of log minus log curves and was found to be satisfactory for all multivariate covariates. p-values < 0.05 were considered to be statistically significant.

In early breast cancers, high densities of M2 macrophages and low densities of M1 macrophages in the tumour epithelium and stroma are strongly associated with reduced DFS. Our findings revealed the importance of examining both macrophage phenotypes together and in context of their relative frequencies. A proposed classification based on TAM polarisation shifts identified a high-risk group of “M2-shifted” tumours that are unlikely to fully respond to accelerated partial breast irradiation. The M-shift model might aid clinicians in selecting breast cancer patients in need of extended therapy.

We thank the Tumour Centre at the Friedrich-Alexander University Erlangen-Nürnberg, Erlangen, Germany for providing us with patient data. The present work was performed in fulfilment of the requirements for obtaining the degree “Dr. med.”. 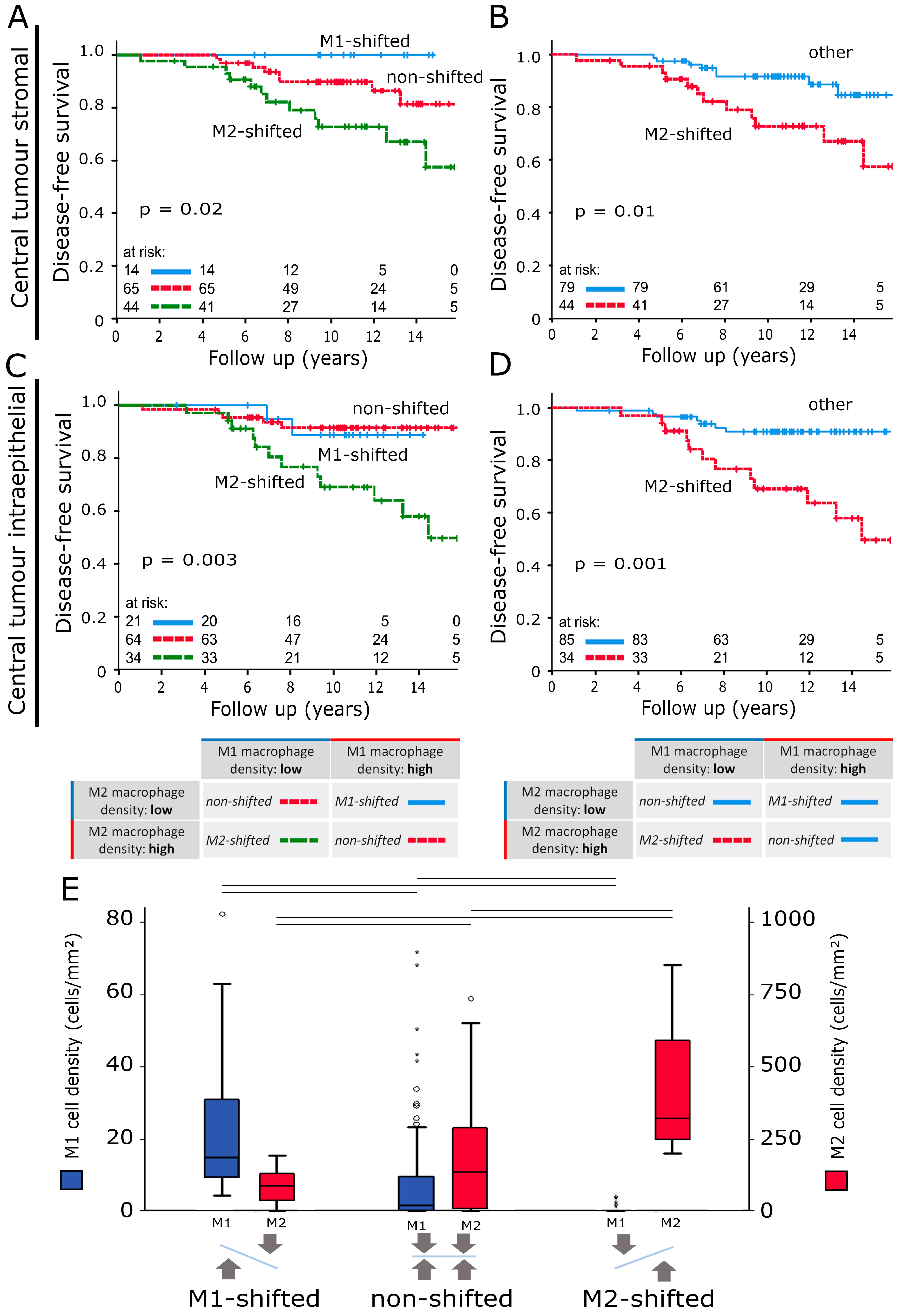