BRCA1/2 Variants and Metabolic Factors: Results From a Cohort of Italian Female Carriers

Women who inherit a BRCAmutation face a high lifetime risk of developing cancer. However, several factors, genetic and/or “environmental”, may influence BRCA penetrance. We studied in 438 women carriers of BRCA1/2 the association of metabolic factors with BRCA1/2 variants and the risk effect of metabolic exposures in relation to the position of the mutations within the BRCA1/2. The pathogenic variants were divided into loss of function (LOF) and nonsynonymous variants. Findings from this study suggest that higher insulin levels are significantly associated with BRCA LOF variants compared to nonsynonymous variant carriers. Therefore, our results support the hypothesis that the impairment of BRCA protein functions could result in a different association with “metabolic” factors, possibly due to a genetic effect on the etiology of altered response to metabolism.

Women carriers of pathogenic variants (mutations) in the BRCA1/2 genes face a high lifetime risk of developing breast cancer (BC) and/or ovarian cancer (OC). However, metabolic factors may influence BRCA penetrance. We studied the association of metabolic factors with BRCA1/2 variants and the risk effect of metabolic exposures in relation to the position of the mutations within the BRCA1/2. Overall, 438 women carriers of BRCA1/2 mutations, aged 18–70, with or without a previous diagnosis of BC/OC and without metastases, who joined our randomized dietary trial, were included in the study. The pathogenic variants were divided, according to their predicted effect, into loss of function (LOF) and nonsynonymous variants. The association between metabolic exposures and variants were analyzed by a logistic regression model. LOF variant carriers showed higher levels of metabolic parameters compared to carriers of nonsynonymous variants. LOF variant carriers had significantly higher levels of plasma glucose and serum insulin than nonsynonymous variant carriers (p = 0.03 and p < 0.001, respectively). This study suggests that higher insulin levels are significantly associated with LOF variants. Further investigations are required to explore the association of metabolic factors with LOF variants and the mechanisms by which these factors may affect BRCA-related cancer risk. View Full-Text
Keywords: BRCA genes; pathogenic variants; BRCA-related cancer; metabolic factors BRCA genes; pathogenic variants; BRCA-related cancer; metabolic factors
►▼ Show Figures 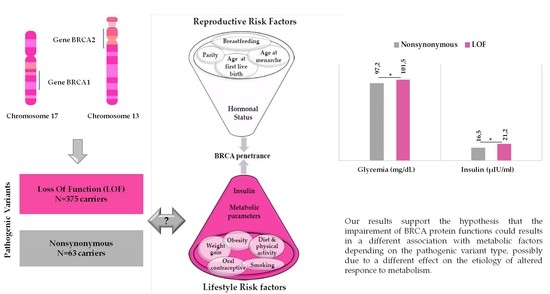