Breast cancer is a common malignancy, but the understanding of its cellular and molecular mechanisms is limited. ZFHX3, a transcription factor with many homeodomains and zinc fingers, suppresses prostatic carcinogenesis but promotes tumor growth of liver cancer cells. ZFHX3 regulates mammary epithelial cells’ proliferation and differentiation by interacting with estrogen and progesterone receptors, potent breast cancer regulators. However, whether ZFHX3 plays a role in breast carcinogenesis is unknown. Here, we found that ZFHX3 promoted the proliferation and tumor growth of breast cancer cells in culture and nude mice; and higher expression of ZFHX3 in human breast cancer specimens was associated with poorer prognosis. The knockdown of ZFHX3 in ZFHX3-high MCF-7 cells decreased, and ZFHX3 overexpression in ZFHX3-low T-47D cells increased the proportion of breast cancer stem cells (BCSCs) defined by mammosphere formation and the expression of CD44, CD24, and/or aldehyde dehydrogenase 1. Among several transcription factors that have been implicated in BCSCs, MYC and TBX3 were transcriptionally activated by ZFHX3 via promoter binding, as demonstrated by luciferase-reporter and ChIP assays. These findings suggest that ZFHX3 promotes breast cancer cells’ proliferation and tumor growth likely by enhancing BCSC features and upregulating MYC, TBX3, and others. View Full-Text
Keywords: ZFHX3; breast cancer; MYC; TBX3; cancer cells stemness ZFHX3; breast cancer; MYC; TBX3; cancer cells stemness
►▼ Show Figures 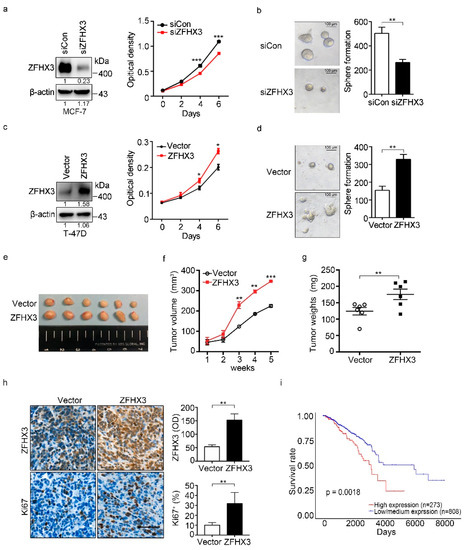