Antiplatelet Therapy Improves the Prognosis of Patients with Hepatocellular Carcinoma

Hepatocellular carcinoma (HCC) is one of the most common causes of cancer-related death worldwide [1]. Surgical resection, radiofrequency ablation (RFA), transcatheter arterial chemoembolization (TACE) and tyrosine kinase inhibitor (TKI) have become the standard options for HCC treatment. However, prognosis in HCC remains unsatisfactory because of a high recurrence rate and deterioration of liver function after treatment [2].
In previous studies, antiplatelet therapy had been shown to prevent liver fibrosis and the occurrence of HCC [3,4,5,6,7]. Several mechanisms have been proposed to explain the protective effects. First, the anti-inflammatory action of antiplatelet agents inhibits transcription of nuclear factor-kappa B (NF-κB) in the endothelial cells and prevents adhesion of macrophages and T-lymphocytes [8]. It also reduces the level of inflammatory cytokines including tumor necrosis factor-β (TNF-β) and platelet derived growth factor (PDGF). Second, antiplatelet agents have antithrombotic effects which prevent liver fibrosis [9]. Aspirin and clopidogrel were compared in the occurrence of HCC. Both drugs reduced the risk of HCC. However, hazard ratio of HCC development was lower in aspirin in time varying cox proportional hazards regression analysis [5].
Furthermore, antiplatelet agents have antitumor effects. Aspirin inhibits cyclooxygenase (COX)-2, which promotes inflammation and cell proliferation [10]. In addition, other mechanisms such as the inhibition of NF-κB, induction of apoptosis and catabolism of polyamines have been investigated [11,12]. Aspirin has been shown to decrease the risk of recurrence and death in patients with colorectal cancer, breast cancer and lung cancer [13,14]. Clopidogrel has a different mechanism from aspirin, in that it inhibits the P2Y12 adenosine diphosphate receptor [15,16]. Inhibition of platelet activity via the P2Y12-dependent mechanism reduced the development of tumor metastasis [17]. In fact, clopidogrel reduced the risk of metastasis of colon cancer and prostate cancer [18,19].
However, the effect of antiplatelet therapy after diagnosis of HCC is unknown. The recent epidemics of obesity and metabolic syndrome are associated with an increasing prevalence of nonalcoholic fatty liver disease (NAFLD) [20,21], which is a major component of non-viral HCC [22]. Underlying conditions such as hyperlipidemia, diabetes mellitus and hypertension increase the risk of coronary artery disease and cerebrovascular disease. Antiplatelet therapy is useful for prevention of these arterial diseases. The number of HCC patients with antiplatelet therapy is currently increasing and is expected to increase further in the future. Thus, there is a need to clarify the effects and safety of antiplatelet therapy for HCC treatment.
In this study, we investigated the effect of antiplatelet therapy on the prognoses of HCC patients, focusing particularly on HCC recurrence and deterioration of liver function. We also evaluated the safety of antiplatelet therapy by calculating the incidence of hemorrhagic events.

2.4. HCC Recurrence and Time to Progression

This retrospective study enrolled consecutive naïve patients with HCC who started treatment at our university hospital from February 2005 to January 2020. HCC diagnosis was based on histology or radiological findings, such as contrast-enhanced computed tomography (CT) or contrast-enhanced magnetic resonance imaging (MRI). Tumor node metastasis (TNM) stage, which was proposed by the Liver Cancer Study Group of Japan, 6th edition (LCSGJ 6th), was used for evaluation of HCC staging. Underlying liver diseases were categorized according to the presence of chronic hepatitis virus infection. Patients who tested positive for hepatitis B surface antigens and hepatitis C antibodies were classified into hepatitis B virus (HBV) and hepatitis C virus (HCV) groups, respectively. Those who were virus-negative were included in the non-HBV and non-HCV (NBNC) group. HCC treatment was categorized into four groups: curative therapies, TACE, others and best supportive care (BSC). We did not include patients who had undergone liver transplantation. Liver resection and RFA were defined as curative therapy. Other treatments, such as radiotherapy and tyrosine kinase inhibitor (TKI), were defined as “others”. Measurement of blood samples, including alfa-fetoprotein (AFP) and des-gamma-carboxy prothrombin (DCP), was performed before the first treatment in all patients. After the first treatment, patients underwent regular follow-ups with measurement of blood samples and radiologic examinations of CT or MRI every 1 to 3 months. HCC recurrence was diagnosed according to radiological findings and tumor markers. Additional treatments for HCC recurrence were determined according to tumor and liver condition. This study was approved by the institutional ethical board in accordance with the Declaration of Helsinki (H29-078).

4.3. Endpoint of this Study

The endpoints of this study were overall survival (OS) and liver-related death. OS was the time from the first treatment to death from any cause or last follow-up. We defined all death caused by liver diseases as liver-related death. Liver-related death included gastrointestinal hemorrhage, such as esophageal varices rupture. We also evaluated time to tumor progression (TTP), time to decompensation and time to hemorrhagic events. TTP and time to decompensation were stratified by the first treatment, curative treatment and TACE. Time to decompensation was defined as the time it took for patients with Child–Pugh grade A liver disease at baseline to progress to Child–Pugh grades B or C. Hemorrhagic events included all hemorrhage diseases such as gastrointestinal bleeding, cerebral bleeding and HCC rupture.

This research was supported by The Ministry of Education, Culture, Sports, Science and Technology (MEXT) KAKENHI Grant Number 18K15832. 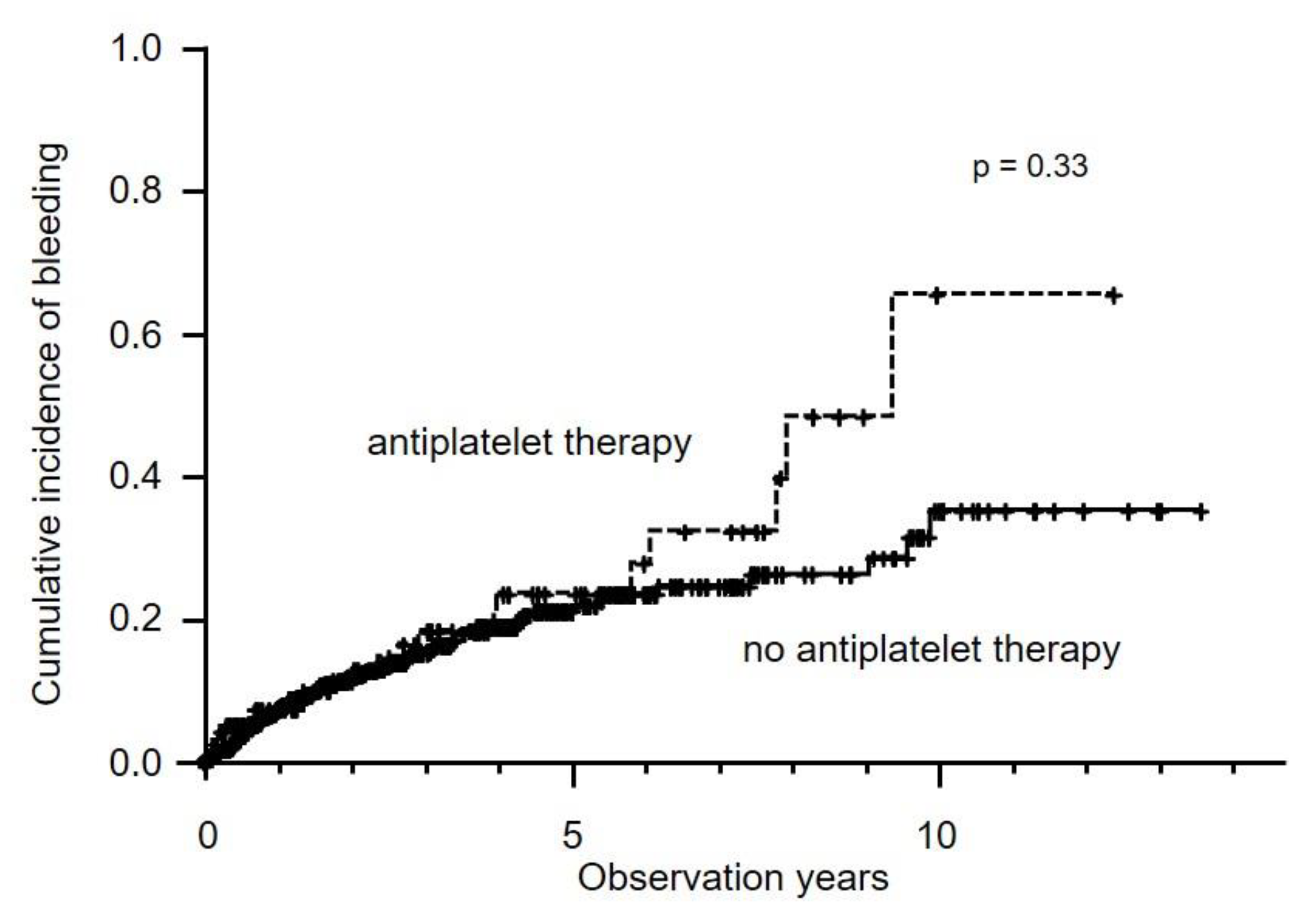