A Retrospective Evaluation of Risk of Peripartum Cardiac Dysfunction in Survivors of Childhood, Adolescent and Young Adult Malignancies

Long-term survivors of malignancy are at risk of late complications from exposure to past cytotoxic therapies [1]. Anthracycline-containing chemotherapy and chest radiotherapy are known to be associated with long-term, dose-dependent cardiotoxicity, which can manifest as clinical or subclinical cardiac dysfunction [2,3]. Known contributing factors to cardiotoxicity include higher cumulative anthracycline and radiotherapy doses, combined treatment modalities, younger age at treatment and female gender [2,3,4,5,6,7]. Long-term survivors of paediatric, adolescent and young adult (AYA) malignancies represent a particularly vulnerable group due to their younger age at past exposure, likelihood of poor patient recollection of past treatments and potential patient phobias stemming from these early medical interactions at a younger age [8].
Due to improved cure rates and fertility preservation, more female survivors of childhood and AYA malignancies are now reaching adulthood with reproductive potential. For the recipients of past cardiotoxic therapies, peripartum cardiac dysfunction is a concern [9,10], in particular, the ability to accommodate the associated physiological cardiovascular demands of pregnancy and childbirth, including increased maternal blood volume, preload, heart rate and cardiac output [11,12].
Within the general population, ‘peripartum cardiomyopathy’ (PPCM) is a rare condition with an estimated incidence of 1 in 3000 live births [11,12]. PPCM is typically a dilated cardiomyopathy, defined as heart failure during pregnancy (usually the last trimester) or ≤5 months postpartum [11,12]. However, there is limited data regarding the comparative cumulative incidences of pregnancy-related cardiac events in long-term survivors of malignancy. Furthermore, the risk factors for peripartum cardiac dysfunction in long-term survivors of malignancy are unknown.
In this study, we investigate the risk of peripartum cardiac dysfunction in long-term survivors of malignancy. We describe these cardiac events, explore risk factors and assess postpartum cardiac recovery.

2.2. Characteristics of Pregnancies and Live Births

In total, 116 pregnancies were identified (Figure 1a), with 110 live births (102 singletons and 4 sets of twins). There were 10 foetal deaths: 7 spontaneous miscarriages, 2 induced terminations of pregnancy and 1 ectopic pregnancy. Of note, none of the foetal deaths were attributable to maternal cardiac dysfunction.
The median time from diagnosis of malignancy to first pregnancy was 11 years (range 5–37 years) and median maternal age at first pregnancy was 31 years (range 19–42), (Table 1). There were no cases of neonatal or maternal mortality. Two of the five women with cardiac dysfunction delivered prematurely (<37 weeks gestation).

Two of 64 patients (3.1%, 95% CI 0.4–10.8%) were found to have asymptomatic peripartum cardiac dysfunction (Figure 1b).
Patient 4 was diagnosed with Ewing sarcoma at age 12. She received doxorubicin (440 mg/m2 cumulative dose) and cyclophosphamide (2.4 g/m2). On completion of oncological treatment, FS was normal on TTE (35%). Pre-pregnancy, she had no other known cardiac risk factors. Maternal age at first pregnancy was 26 years, 14 years after initial sarcoma diagnosis. Asymptomatic cardiac dysfunction was detected on screening TTE in her first pregnancy: FS measured 25% in the second trimester and 22% in the third trimester. Delivery was at 37 weeks via caesarean section. Her next available TTE was 4 years later, approximately 10 months after her second pregnancy, demonstrating ongoing below-baseline FS of 27%.
At age 14, Patient 5 was diagnosed with classical Hodgkin lymphoma and received epirubicin (450 mg/m2 cumulative dose, 301.5 mg/m2 equivalent cumulative dose). Prior to pregnancy, she had no other known cardiac risk factors and a normal baseline TTE demonstrating an LVEF of 55%. First pregnancy occurred 17 years after initial lymphoma diagnosis at age 31 years, ending in spontaneous abortion with no known peripartum cardiac event. Second pregnancy occurred 22 years after initial lymphoma diagnosis at age 36. Cardiac function was assessed 14 months prior to second pregnancy with normal systolic baseline (LVEF 62%). During pregnancy, a screening TTE was performed in accordance with the policy of the Late Effects Clinic. At 14 weeks gestation, LVEF was within normal range (56%). However, this subsequently dropped to 44% at 35 weeks gestation leading to hospitalisation for cardiac monitoring. At 36 weeks gestation, the LVEF spontaneously improved to 58%. At 41 weeks gestation the patient underwent an instrumental delivery, complicated by neonatal shoulder dystocia. Three months post-delivery, postpartum TTE demonstrated a return to normal baseline systolic function (LVEF 63%).

2.7. Incidence of PPCM Per Live Birth and Comparison with the General Population

2.8. Maternal Outcomes Beyond the Postpartum Period

The results of the TTE are demonstrated in Figure 2. Postpartum cardiac function failed to return to baseline in four of the five women (80%): three women with symptomatic heart failure remain on medication and receive long-term cardiology follow-up, the fourth patient died of a new malignancy. In the fifth woman with documented peripartum cardiac dysfunction, the LVEF returned to baseline shortly before childbirth and her cardiac function remained normal throughout the postpartum period and beyond.

Fifty-nine women had no reported cardiac events occurring in the defined peripartum period. Of these, four (7%) had subsequent diagnoses of A-CHF beyond the postpartum period and one (2%) had a diagnosis of A-CHF prior to pregnancy. In this latter patient, baseline FS was 16–24% prior to pregnancy; however, the pregnancy was clinically uneventful with an unexplained recovery in LVEF (63%) postpartum.

This retrospective study was approved by the Peter MacCallum Cancer Centre Ethics Committee. Eligible patients were identified from the Peter MacCallum Cancer Centre Late Effects Clinic (LEC) and Haematology databases. Eligibility included long-term survivors of childhood/AYA malignancies, aged <30 years at the time of oncological diagnosis [13], with subsequent pregnancies. “Long-term survivorship” was defined as survival ≥5 years following the most recent oncological treatment, or ≥2 years post allogenic stem cell transplantation. Exclusion criteria included pregnancies occurring prior to the long-term survivorship time point. For eligible women who were diagnosed and treated for malignancy after their pregnancies, the subsequent oncological treatment and cardiac data were excluded from the analysis.
The records of eligible patients were retrospectively reviewed for information regarding demographics, past oncological diagnoses and past oncological treatments including equivalent cumulative anthracycline doses (calculated by multiplying doxorubicin × 1, daunorubicin × 0.833, epirubicin × 0.67, idarubicin × 5 and mitoxantrone × 4) [14]. Additionally, pre-existing cardiac risk factors and obstetric history were obtained. TTE and cardiac MRI from the antenatal, perinatal and postnatal periods were reviewed and details of patient management and clinical outcomes were recorded.

Symptomatic cardiac dysfunction during pregnancy: The presence of symptoms or signs of congestive heart failure occurring at any stage within pregnancy or ≤5 months post-delivery. It was defined and measured according to:

Subclinical cardiac dysfunction during pregnancy was defined as an absence of the above clinical features with abnormal cardiac function (FS < 28%, LVEF < 50%) during pregnancy or ≤5 months post-delivery.
“Peripartum cardiomyopathy” or “PPCM” is a pre-defined diagnosis that requires pre-pregnancy cardiac assessment [11]. To meet this diagnosis, patients with symptomatic heart failure during pregnancy were required to have had pre-pregnancy TTE confirming the absence of pre-existing cardiac dysfunction. This definition has been previously reported in the general obstetric population with an estimated prevalence of 1 in 3000 live births [11,12].
All cardiac events were centrally reviewed by an experienced cardiologist (JM). Of note, these peripartum cardiac events are considered distinct from non-pregnancy related anthracycline-induced cardiotoxicity (A-CHF).

Statistical methods consisted of standard reporting of descriptive baseline statistics carried out using the base package of the R language for statistical computing [16]. Exact logistic regression was used to test for a relationship between cardiac dysfunction (symptomatic or subclinical) and the following putative predictors; (a) age at diagnosis, (b) anthracycline dose, (c) maternal age at pregnancy and (d) interval between diagnosis and pregnancy. Fisher’s exact test was used to test for a relationship between cardiac dysfunction and dichotomous predictors including cancer type (haematological malignancy versus solid tumour) and radiotherapy treatment. Odds ratios and 95% CIs were calculated, as was the p-value for a hypothesis test with null hypothesis of no effect. p < 0.05 was considered statistically significant.
Modelling considered live births only to ensure an objective denominator, not confused by unreported terminations, or unknown pregnancies with spontaneous abortions. Some of the putative predictor variables were defined at the woman level (age at cancer diagnosis, anthracycline dose and cancer type), whereas others were defined at the live birth level (interval between diagnosis and pregnancy and maternal age at pregnancy). Thirty-three women in the dataset had multiple live births. The main analysis was performed considering the first live birth per woman only (n = 63) in order to remove any nesting due to similarity between live births within the same woman. One woman had two pregnancies with zero live births, which were excluded from analyses. A sensitivity analysis was also performed considering all live births (n = 110). Incidence calculations included all live births. An exact method for estimating proportions (Clopper-Pearson) was used to estimate the incidence of pregnancy related cardiac dysfunction amongst all live births. This was compared with that of the general population published figure of 1 in 3000 live births [11,12]. Only women with ≥1 TTE during pregnancy or within 5 months postpartum were included in the analyses for cardiac dysfunction.

Overall, peripartum cardiac dysfunction is uncommon in long-term survivors of malignancy with prior exposure to cardiotoxic therapies. However, this study has shown that the relative risk is approximately 55 times greater than the general population. This finding is of critical clinical importance for this high-risk population and their treating physicians, and long-term survivors of paediatric and AYA malignancies with prior exposure to cardiotoxic therapies should be managed cautiously with careful cardiac surveillance during the peripartum period. Current COG Guidelines for cardiac surveillance in this at-risk population recommend surveillance in women with prior exposure to significant doses of anthracyclines and/or chest radiotherapy. We suggest that particular vigilance be given to women who received higher anthracycline dose or were younger at the time of original cancer diagnosis. For pregnant long-term survivors of malignancy, risk-adjusted cardiac surveillance programs are required for optimal perinatal care. Furthermore, peripartum cardiac dysfunction may be associated with long-term cardiac morbidity and is an indication for specialist cardiology follow-up. Larger studies are required to more rigorously evaluate risk factors to enable women to make informed decisions regarding maternal cardiac safety in pregnancy. 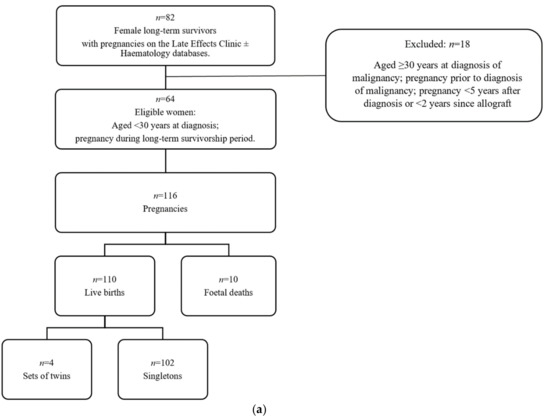 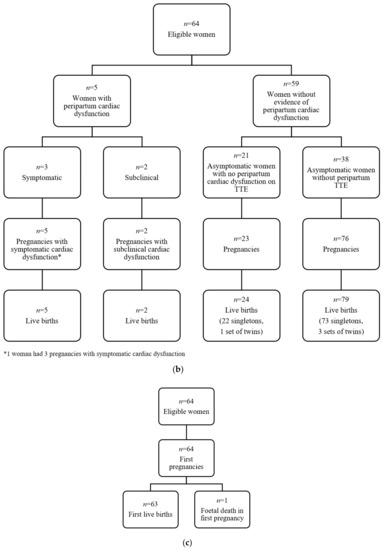 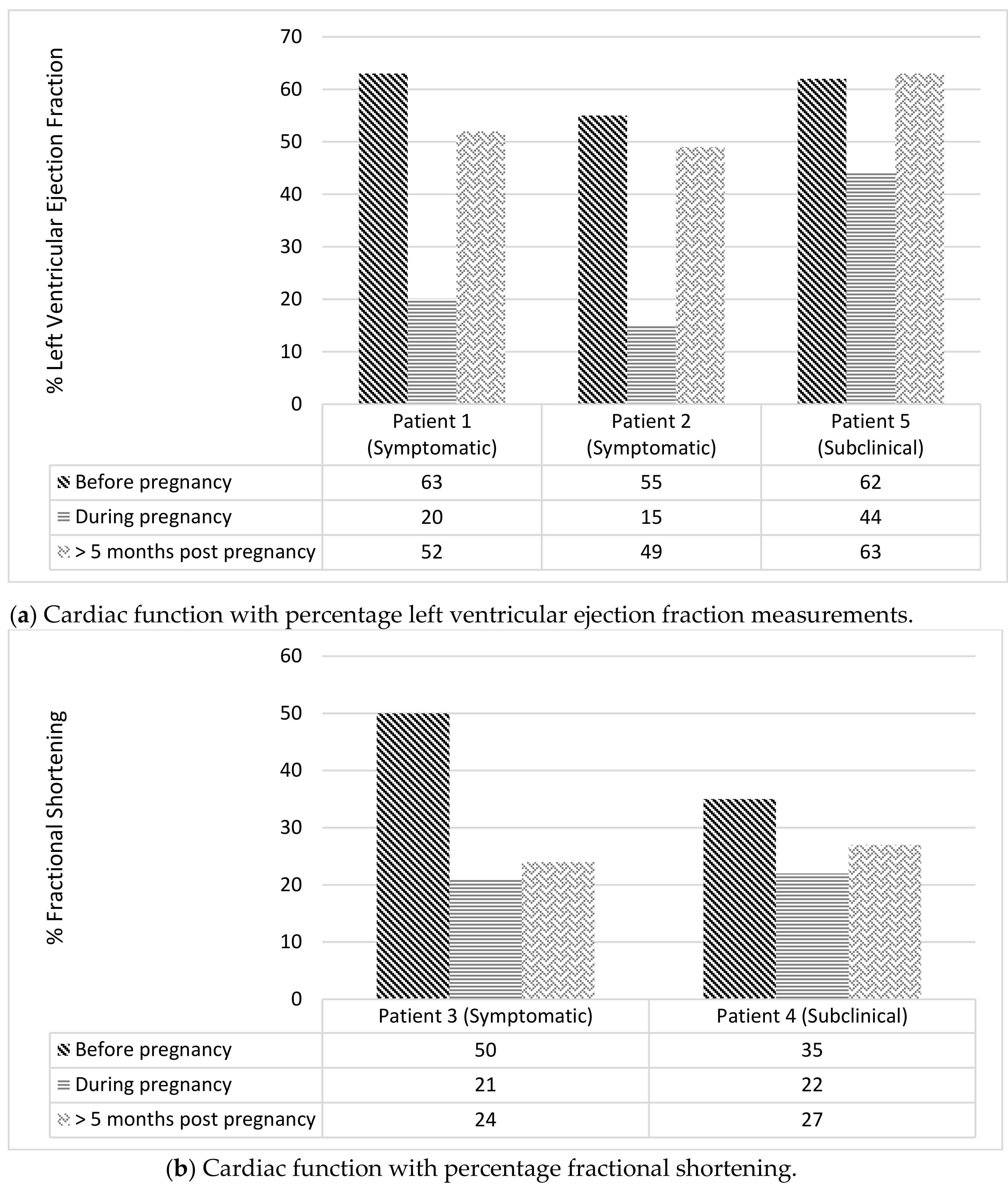