The d16HER2 Splice Variant: A Friend or Foe of HER2-Positive Cancers?
Next Article in Special Issue

The effective management of patients with breast cancer (BC) depends on the early diagnosis of the disease. Currently, BC diagnosis is based on diagnostic imaging and biopsy, while the use of non-invasive circulating biomarkers for diagnosis remains an unmet need. Among the plethora of proposed non-invasive biomarkers, circulating microRNAs (miRNAs) have been considered promising diagnostic molecules because they are very stable in biological fluids and easily detectable. Although the discovery of miRNAs has opened a new avenue for their clinical application, the clinical translatability of these molecules remains unclear. This review analyses the role of circulating miRNAs as BC diagnostic biomarkers and focuses on two essential requirements to evaluate their clinical validity: i) Specificity and ii) consistent expression between the blood and tissue. These two issues were analyzed in depth using the Human miRNA Disease Database (HMDD v3.0) and the free search engine PubMed. One hundred and sixty three BC-associated miRNAs were selected and analyzed for their specificity among all human pathologies that shared deregulation (291) and consistent expression in the bloodstream and the tissue. In addition, we provide an overview of the current clinical trials examining miRNAs in BC. In conclusion, we highlight pitfalls in the translatability of circulating miRNAs into clinical practice due to the lack of specificity and a consistent expression pattern between the tissue and blood. View Full-Text
Keywords: miRNAs; circulating miRNAs; breast cancer miRNAs; circulating miRNAs; breast cancer
►▼ Show Figures 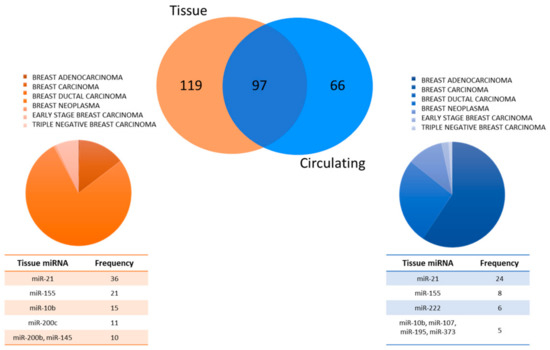