Nerves and Pancreatic Cancer: New Insights into A Dangerous Relationship

Perineural invasion (PNI) is defined as the presence of neoplastic cells along nerves and/or within the different layers of nervous fibers: epineural, perineural and endoneural spaces. In pancreatic cancer—particularly in pancreatic ductal adenocarcinoma (PDAC)—PNI has a prevalence between 70 and 100%, surpassing any other solid tumor. PNI has been detected in the early stages of pancreatic cancer and has been associated with pain, increased tumor recurrence and diminished overall survival. Such an early, invasive and recurrent phenomenon is probably crucial for tumor growth and metastasis. PNI is a still not a uniformly characterized event; usually it is described only dichotomously (“present” or “absent”). Recently, a more detailed scoring system for PNI has been proposed, though not specific for pancreatic cancer. Previous studies have implicated several molecules and pathways in PNI, among which are secreted neurotrophins, chemokines and inflammatory cells. However, the mechanisms underlying PNI are poorly understood and several aspects are actively being investigated. In this review, we will discuss the main molecules and signaling pathways implicated in PNI and their roles in the PDAC. View Full-Text
Keywords: pancreatic cancer; perineural invasion; neurotrophins; molecular signaling pancreatic cancer; perineural invasion; neurotrophins; molecular signaling
►▼ Show Figures 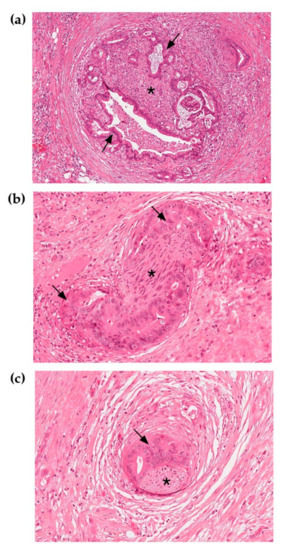