Colorectal cancer (CRC) is the third most common cancer in both men and women [1]. The standard treatment for CRC is chemotherapy following colon resection by surgery [2]. For chemotherapy, either FOLFOX (5-fluorouracil and leucovorin with oxaliplatin) or FOLFIRI (5-fluorouracil, leucovorin with irrinotecan) combined with bevacizumab is mainly used [3]. Despite advances in treatment strategies for CRC, the prognosis remains poor because of the high rates of metastasis [4]. Oxaliplatin is the first platinum-based drug to demonstrate clinical effectiveness against CRC, and it remains one of the most effective chemotherapeutic drug for CRC treatment along with 5-fluorouracil and leucovorin [4,5]. However, repeated and long-term administration induces drug resistance through the promotion of export from the cells and nucleotide excision repair by increasing expression of the multidrug resistance protein, glutathione, and excision repair cross-complementation group 1 [6,7]. Therefore, there is a need to explore new strategies to improve the efficiency of CRC treatment by identifying molecules and mechanisms associated with oxaliplatin resistance.
Autophagy (macroautophagy) is a process involving the lysosomal degradation of cytosolic proteins, damaged organelles, and invasive microbes in autophagosomes, which are double-membrane vesicles generated by extension of phagophores [8]. Chemotherapy acts as a stress in the cells and increases apoptosis inhibition, autophagy increase, and epithelial-mesenchymal transition (EMT)-competent phenotypes through Beclin-1, Bcl-2, mammalian target of rapamycin (mTOR), adenisine monophosphate (AMP)-activated protein kinase (AMPK), and select microRNAs. In CRC, autophagy increases EMT-competent CRC cells and acquires resistance to chemotherapeutic drugs by the TP53-dependent pathway [9].
Nitric oxide synthases (NOSs) are enzymes that catalyze the production of nitric oxide (NO) from L-arginine. NO is important for maintaining vascular tone, insulin secretion, and angiogenesis. There are three mammalian NOS isoforms: neuronal NOS (nNOS or NOS1), inducible NOS (iNOS or NOS2), and endothelial NOS (eNOS or NOS3) [10]. Although NOS expression is associated with cancer progression and metastasis, recent studies have suggested that NOS3 may inhibit tumor growth, invasion, and angiogenesis, particularly in breast cancer, and CRC [11,12,13].
Cannabidiol (CBD) is one of the major components of Cannabis sativa [14]. It is non-psychoactive and widely used to treat diseases, such as neurological diseases and cancer [15]. Many clinical trials for its use in glioblastoma treatment are also currently underway [16]. CBD is known to exert its antitumor effects through Noxa activation, downregulation of protein kinase B (AKT)/mTOR, and mitogen-activated protein kinase signaling [14]. However, CBD has not been studied for its potential to overcome resistance to chemotherapeutic drugs.
In this study, we investigated whether CBD overcomes oxaliplatin resistance in CRC cells, and the relationship between NOS3 downregulation and combined oxaliplatin and CBD treatment-induced autophagy. We demonstrate, for the first time, that CBD enhances oxaliplatin-mediated autophagy via NOS3-mediated mitochondrial dysfunction, suggesting that NOS3 is a potential therapeutic target for overcoming oxaliplatin resistance and that CBD may be a new therapeutic agent for CRC treatment.

To identify the specific effector signaling proteins associated with oxaliplatin resistance, we detected the phosphorylation of certain proteins using a Human Phospho-Kinase Array kit. Endogenous phospho-NOS3 levels were significantly increased in oxaliplatin-resistant cells compared with the parent cells (Figure A2A,B). Additionally, CBD decreased the phosphorylation of several proteins including AKT, TOR, and AMPK associated with autophagy, and most markedly, NOS3 (Figure 2A,B). To confirm this result, we measured the levels of phospho-NOS3 using western blotting and immunofluorescence. As shown in Figure 2C,D, and Figure A2C, while total NOS3 protein levels were unchanged, combined oxaliplatin and CBD treatment attenuated the levels of phospho-NOS3. To determine the role of NOS3 downregulation in oxaliplatin and CBD-induced autophagy, oxaliplatin-resistant cells were transfected with an empty vector (pcDNA) or a NOS3-overexpressing plasmid (pcDNA3-NOS3-green fluorescent protein (GFP)). Compared to cells treated with the empty vector, NOS3 overexpression attenuated oxaliplatin and CBD-induced autophagic cell death in both cell lines, as indicated by the protein levels of LC3, and p62 (Figure 2E).
Since NOS3 regulates NO production [18], we investigated whether oxaliplatin and CBD-induced NOS3 downregulation was associated with NO generation. As shown in Figure 2F and Figure A2D, NO levels were decreased by combined oxaliplatin and CBD treatment. Taken together, these results show that NOS3 plays an important role in oxaliplatin resistance, as well as autophagic cell death induced by CBD and NO production.

Oxaliplatin, which is commonly used for CRC treatment, binds covalently to DNA nucleobases to form guanine–guanine and guanine–adenine DNA links [4]. This abnormal binding interferes with the structure of DNA and inhibits DNA replication, repair, and transcription, triggering double-strand breaks and causing apoptosis [5]. However, drug resistance occurs in ~40% of CRCs treated with oxaliplatin [21]. Therefore, a new therapeutic strategy needs to be developed to overcome oxaliplatin resistance in CRCs. In this study, we investigated whether there is a synergistic effect when CBD is combined with oxaliplatin for CRC treatment. Additionally, we analyzed the mechanism whereby CBD overcomes oxaliplatin resistance in CRC cells and report, for the first time, that CBD downregulates NOS3 activity, resulting in mitochondrial dysfunction and finally, leading to autophagy.
Oxaliplatin resistance is acquired through a variety of mechanisms, including inefficient cellular accumulation of drugs [22], promotion of DNA repair [23], activation of anti-apoptotic pathways [24], and changes in cellular metabolism. An important finding of this study is that NOS3 is closely related to oxaliplatin resistance. NOS is an enzyme that converts L-arginine to L-citrulline to produce NO in various cell types [25]. It has been mainly studied for its function in endothelial cells. In addition, NOS has been reported to be associated with resistance to cisplatin and 5-fluorouracil through Wnt signaling and family with sequence similarity 171, member B in non-small cell lung cancer, breast cancer, and leukemia [7,26,27]; but this is a report of drug resistance regulated by NOS2. Our results showed that the activity of NOS3 was increased in oxaliplatin-resistant cells compared to that in their parent cells and this was attenuated by CBD, resulting in decreased NO production. Moreover, studies on the effects of CBD on overcoming drug resistance have rarely been performed on cancers other than glioblastoma [26,27]. Therefore, NOS3 plays an important role in acquiring resistance to oxaliplatin, and CBD can decrease NO production by reducing NOS3 activity and thus increase oxaliplatin sensitivity.
Intracellular NO produced by NOS3 directly affects mitochondrial function through oxidative stress [28,29,30]. Consistent with this, we found that CBD reduced OCR, a direct marker of mitochondrial dysfunction, and significantly decreased MMP, mitochondrial complex I activity, the number of mitochondria, and the levels of the mitochondrial membrane protein, cardiolipin. Moreover, CBD increased the levels of intracellular ROS, especially mitochondrial ROS, and decreased the protein expression of the mitochondrial antioxidant enzyme, SOD2. NOS3 knockdown further reduced SOD2 levels in cells treated with CBD and oxaliplatin, indicating that the downregulation of NOS3 induced by CBD causes mitochondrial dysfunction and ROS overproduction by SOD2 reduction.
Autophagy is known to be involved in cell survival by regulating intracellular homeostasis in response to stress [31]. However, in recent decades, autophagy has also been reported to be associated with cell death [32]. Previous studies have suggested that autophagy promotes the resistance of cancer cells to chemotherapy [33,34]. In contrast to those of previous studies, our results showed that the induction of autophagy by CBD increased the response of cells to oxaliplatin. The reason for this discrepancy is unclear, but it may be due to differences in the mechanism of action of CBD or different cellular responses to oxaliplatin compared with other chemotherapy drugs.
Moreover, one of the serious side effects of oxaliplatin is neurotoxicity induced by the pro-inflammatory cytokines, interleukin 6, tumor necrosis factor alpha, and cyclooxygenase 2 [35,36]. CBD enhances antioxidant activity and inhibits the secretion of pro-inflammatory cytokines and thus, possibly acts as a neuroprotectant [37,38,39]. Therefore, CBD may attenuate the neurotoxic side effects of oxaliplatin.

Cells were seeded onto 96-well plates at a density of 1 × 104 cells/well and incubated overnight. They were then treated with CBD or oxaliplatin for 24 h. Subsequently, WST solution was added to each well for 2 h. The absorbance at 450 nm was then measured using a microplate reader (SPECTRA190; Molecular Devices, Sunnydale, CA, USA).

Immunoblotting was performed as previously described [40].

Cells were infected with recombinant adenoviruses expressing GFP-LC3 (a gift from Professor Chang Kyu Lim, Chungnam National University, Daejeon, Korea). Infected cells were then incubated with CBD and oxaliplatin for 6 h and stained with 5 μM lysotracker dye for 30 min at 37 °C. The cells were observed under a confocal microscope (Carl Zeiss, Oberkochen, Germany).

The Autophagy Detection Kit (Abcam) measures autophagic activity in living cells using a fluorescent detection reagent. Cells were seeded in culture dishes, incubated overnight. Following incubation, they were washed with phosphate-buffered saline (PBS) and pretreated with 1 μM rapamycin (an autophagy inducer) in serum-free RPMI medium for 1 h at 37 °C. Cells were then treated with CBD and oxaliplatin for 12 h and subsequently, incubated with 1 μL of Green Detection Reagent for 30 min at 37 °C in the dark. Cells were harvested using trypsin- ethylenediaminetetraacetic acid (EDTA) and resuspended with 500 μL of 1× assay buffer. Cells were analyzed on the FL-1 fluorescence channel of a flow cytometer.

After treatment with oxaliplatin and CBD, cells were harvested using trypsin-EDTA and stained with Trypan blue. Triplicate wells of viable cells were counted using a hemocytometer.

DLD-1 R and colo205 R cells were treated with CBD and oxaliplatin for 24 h and subsequently, incubated with 10 μM DCF-DA and 5 μM MitoSOX dye for 30 min at 37 °C. Cells were then harvested and the fluorescence intensity, indicating the level of ROS, was quantitated by flow cytometry.

Animal experiments were performed according to the Guidelines and Regulations for the Care and Use of the Korea University Institutional Animal Care and Use Committee (KOREA-2018-0083). Four-week-old female BALB/c nude mice were acclimated for 1 week prior to the study and were provided free access to food and water. colo205 R cells (1 × 107) in 100 μL of PBS were subcutaneously injected into 4-week-old female BALB/c nude mice. Tumor size and body weight were measured every 2 days. CBD and oxaliplatin were intraperitoneally injected at the same time. Tumor volume was calculated using the formula, 0.5 × length × (width)2. Six mice were included in each treatment group.

IHC was carried out as previously described [41]. The tissue was observed by confocal microscopy (ZEISS-LSM 700, ZEISS, Oberkochen, Germany).

All experiments were performed in triplicate and each yielded similar result. Results are presented as an average of three independent experiments. Statistical analysis was performed using Prism 6 software (GraphPad, San Diego, CA, USA). The results are expressed as the mean of arbitrary values ± SEM. All results were evaluated using an unpaired Student’s t test, in which a p-value of less than 0.05 was considered significant (*, **, and *** indicates p < 0.05, p < 0.01, and p < 0.001, respectively).

To summarize, NOS3 plays an important role in oxaliplatin resistance and CBD overcomes NOS-induced oxaliplatin resistance by inducing autophagy. This enhanced autophagy is triggered by mitochondrial dysfunction through a reduction in SOD2 expression. Additionally, because CBD can attenuate the side effects of oxaliplatin, our findings suggest that CBD has potential as a new therapeutic agent to combine with other modalities and drugs to treat CRC.

This work was supported by a National Research Foundation (NRF) of Korea grant funded by the Korean government (MSIP, NRF-2017R1A2B2011684 and NRF-2017R1D1A1B03030703) and by the Business for Cooperative R&D Between Industry, Academy, and Research Institute funded by the Korea Small and Medium Business Administration (C0566291).

We thank Kyu Lim for providing the GFP-LC3 vector. 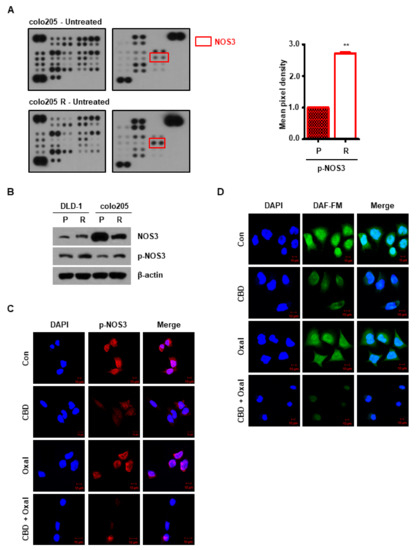 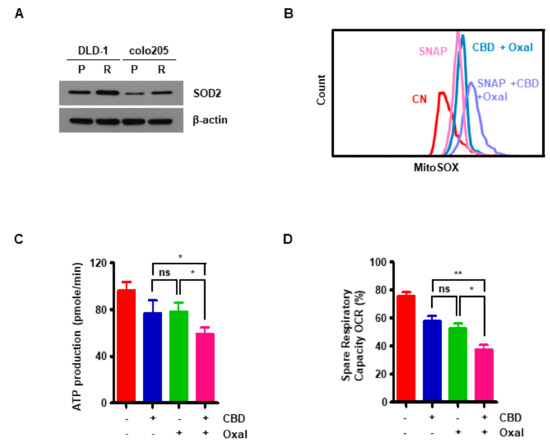 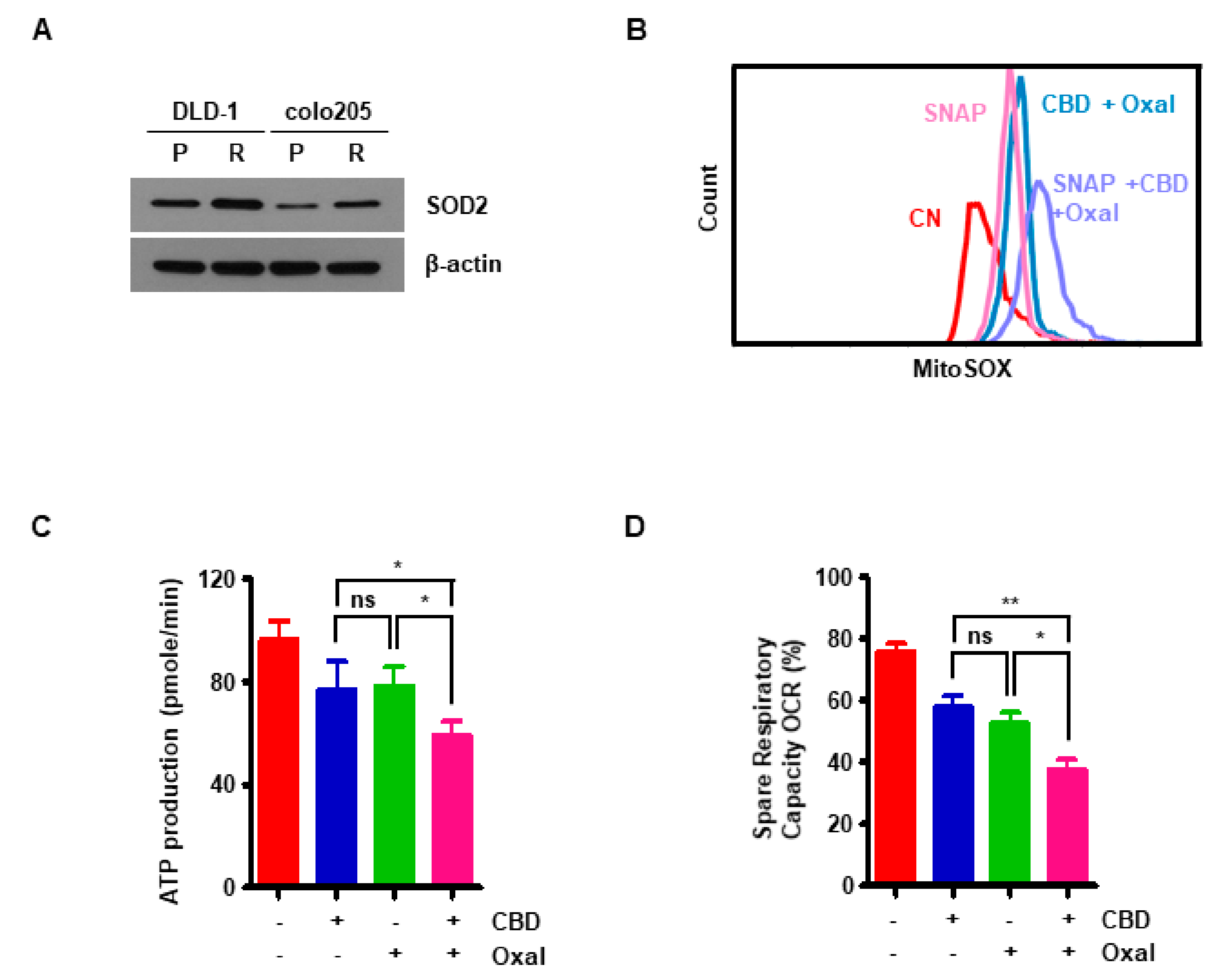 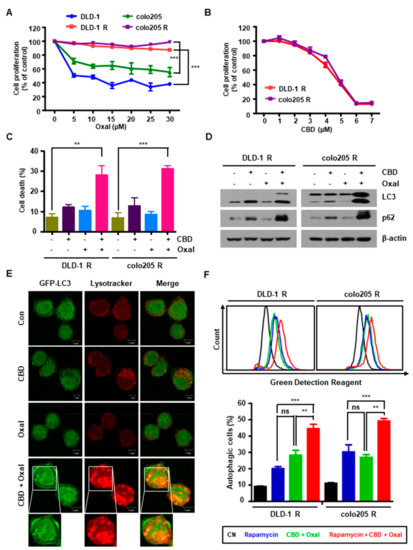 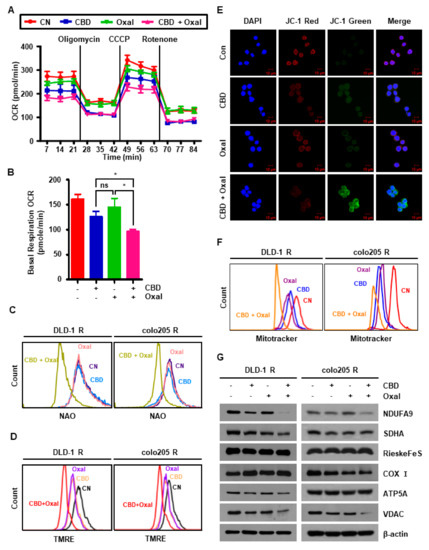