In human epithelial ovarian cancer (EOC), various miRNAs can function as either oncogenes or tumor suppressor genes. We investigated miRNAs known to be involved in EOC progression and analyzed their expression in tissues and serum-derived exosomes from benign serous cystadenoma, borderline serous tumor, low-grade serous ovarian cancer, and high-grade serous ovarian cancer patients (HGSO). The HGSO group was divided based on the platinum-free interval, which is defined as the duration from the completion of platinum-based chemotherapy to recurrence. We also analyzed the mRNA levels of target genes that candidate miRNAs might regulate in patient tissues. miR-214-3p was highly expressed in tissues and exosomes derived from EOC with high malignancy and also found to regulate the expression of LIM homeobox domain 6 (LHX6) mRNA. Serum exosomal levels of miR-214-3p were significantly increased in platinum-resistant HGSO (25.2-fold, p < 0.001) compared to the exosomal expression of benign tumor patients. On transfection of miR-214-3p inhibitor in EOC cells, cell proliferation was inhibited while apoptotic cell death was increased. Collectively, we suggest that miR-214-3p in serum exosomes can be a potential biomarker for the diagnosis and prognosis of ovarian tumor, and its inhibition can be a supportive treatment for EOC. View Full-Text
Keywords: EOC; miR-214-3p; LHX6; exosome; apoptosis EOC; miR-214-3p; LHX6; exosome; apoptosis
►▼ Show Figures 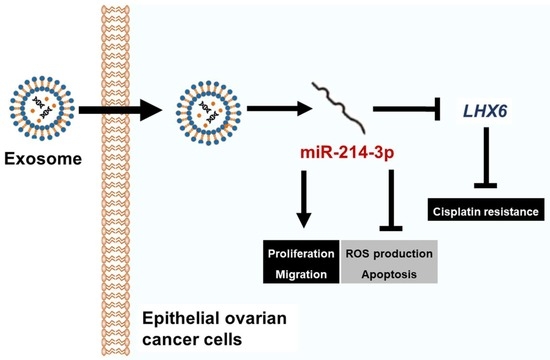