Tune Up In Situ Autovaccination against Solid Tumors with Oncolytic Viruses

Newcastle disease virus (NDV) is an oncolytic virus. As immunogenicity of tumor cells is enhanced by NDV infection, recombinant NDV-infected tumor vaccines (rNDV-TV) are effective methods for inducing specific immunity. However, several tumor cells resist NDV infection, and tumor specific immunity is not sufficiently induced by rNDV-TV. Therefore, we clarified the factor contributing to the suppression of NDV infection and attempted to improve rNDV-TV. Initially we investigated the correlation between the NDV infection rate and interferon-related gene expression in six murine tumor cell lines. A significant negative correlation was observed between the constitutive gene expression of Interferon-stimulated genes (ISGs) and NDV infectivity. The NDV infection rate was examined in each tumor cell treated with the Janus kinase (JAK) inhibitor ruxolitinib (Rux). Furthermore, we evaluated the Th1 response induction by Rux-treated rNDV-TV (rNDV-TV-Rux). In Rux-treated tumor cells, Oasl2 gene expression was significantly decreased and viral infectivity was increased. In immunized mice, the number of CD8+ cells, and those expressing the IFN-γ gene, were significantly increased as compared with Rux-untreated rNDV-TV. The infectivity of the virus was dependent on the degree of ISGs expression in tumor cells. To remedy for this problem, rNDV-TV-Rux was expected to have a Th1 immune response.
Keywords: Newcastle disease virus; tumor; vaccines; ISG; ruxolitinib Newcastle disease virus; tumor; vaccines; ISG; ruxolitinib

Newcastle disease virus (NDV) is characterized by selective viral replication of tumor cells [1]; this virus is known to be oncolytic i.e., it kills infected tumor cells and oncolytic therapy with NDV has been studied [2]. Moreover, in addition to direct tumor cytotoxicity due to its oncolytic properties, NDV-infected tumor cells were reported to induce the maturation of dendritic cell by type I interferon (IFN) [3,4], activation of antigen specific T cells [5], immunostimulatory effects such as the activation of NK cells by hemagglutinin-neuraminidase (HN) protein expressed on an infected cell surface [6], and increase in MHC class I expression [7]. Currently, an NDV-infected tumor vaccine (NDV-TV), using NDV as an adjuvant of tumor cell vaccine, has been studied and clinically tested in humans with mammary adenocarcinoma, ovarian cancer [8], colon cancer [9], squamous cell carcinoma of the head and neck [9,10], and glioblastoma multiforme [11]. These reports indicated an effective anti-tumor response induced by NDV-TV.
Previously, we generated a green fluorescent protein (GFP)-expressing recombinant NDV (rNDV). The virus induced cell death only in infected cells without producing any infectious virus particles, because the viral F protein cleavage site amino acid sequence was transformed (G-R-Q-G/S-R; L) [12]. Furthermore, we examined the induction of anti-tumor response induced by the rNDV infected tumor vaccine (rNDV-TV). rNDV-TV was prepared as tumor cells were infected with rNDV in vitro, then irradiated by UV for inactivation of both rNDV and tumor cells. The rNDV-TV was administered to mice as an immunogen (Figure 1a). In murine melanoma, the mice inoculated with rNDV-TV had significantly suppression of tumor metastasis compared to the control. And, the rNDV-TV vaccinated group survived longer than the control group. [13]. Also in murine fibrosarcoma, the mice inoculated with rNDV-TV induced an effective anti-tumor response and complete tumor exclusion [14]. These experiments revealed the induction of an anti-tumor response by rNDV-TV. However, the results indicated that there were differences in the anti-tumor effect of rNDV-TV between used tumor cell lines.
Therefore, in this study we focused on the difference in the anti-tumor response of rNDV-TV and the rNDV infectivity between several murine tumor cell lines. Moreover, to improve the anti-tumor response of rNDV-TV, the possibility of a new therapeutic strategy was investigated.

Specific pathogen-free C57BL/6 and C3H/HeN murine strains were obtained from CLEA Japan, Inc. (Tokyo, Japan). Mice were maintained in a sterile isolator and treated according to the Laboratory Animal Control Guidelines of the National Guidelines for the Care and Use of Laboratory Animals (Rakuno Gakuen University approval number: VH14A4).

The tumor cells (105 cells/well) were cultured with each medium supplemented with 5% FBS in 6-well plates. For rNDV-TV-Rux preparation, the cells were cultured in the appropriate medium, containing 1 μg/mL of janus kinase (JAK) inhibitor, ruxolitinib (Rux; Cayman Chemical, Ann Arbor, MI, USA), for 20 h before rNDV infection. Then, the cells were infected with rNDV using a multiplicity of infection (MOI) of 2 and cultured at 37 °C for 24 h in a CO2 incubator. rNDV-infected tumor cells were harvested with ethylenediaminetetraacetic acid and phosphate-buffered saline (EDTA-PBS), then inactivated with UV irradiation (400 mJ/cm2). After washing with PBS, the cells were resuspended at 5 × 105 cells/mL in the correct medium. UV-TV was prepared by UV irradiating (400 mJ/cm2) each tumor cell, those without rNDV infection were also prepared.

The tumor cells (5 × 105 cells/well) were cultured with each cell adopted medium containing 5% FBS in 6-well plates. After washing with FBS-free medium, the cells were adsorbed with rNDV using a multiplicity of infection (MOI) of 2 for 1 h in a CO2 incubator. Then, the cells were cultured in medium with 5% FBS at 37 °C for 24 h in a CO2 incubator, and observed with a fluorescence microscope (Zeiss, Oberkochen, Germany). The infection rate was calculated as follow: Infection rate (%) = Tumor cells expressing GFP/Total tumor cells × 100.

Total RNA was extracted with the RNeasy Mini Kit (Qiagen, Hilden, Germany) according to the manufacturer’s instructions. Sample were lysed with 350 μL of RLT buffer, and total RNA was eluted with 50 μL of RNase-free water through the RNeasy Mini spin column.
For cDNA synthesis, Transcriptor First Strand cDNA Synthesis Kit (Roche Diagnostics, Switzerland) was used. Briefly, 1 μg of total RNA was reverse-transcribed using oligo (dT) primers and incubated for 60 min at 50 °C after denaturation. The reverse transcriptase was then inactivated by 5 min heating at 85 °C.

qPCR was carried out with a Light Cycler 2.0 (Roche Diagnostics, Basel, Switzerland), QuantiTect SYBR Green Kit (Qiagen, Hilden, Germany) for the detection of genes. The target genes were normalized with glyceraldehyde-3-phosphate dehydrogenase (GAPDH). The amplification conditions consisted of 45 cycles of 94 °C for 15 s, 60 °C for 30 s, and 72 °C for 15 s. The sequences of primers used in qPCR were shown in supplementary Table S1.

To confirm adequate quantity of Rux for suppression of JAK in tumor cells, tumor cells were incubated with various dose of Rux. Tumor cells (105 cells/well) were cultured with each cell adopted medium containing 5% FBS in 24-well plates for overnight. Then, the cells were washed with FBS-free medium once, and exchanged the medium containing from 0 to 1.0 μg/mL of ruxolitinib, and incubated for 20 h.

To monitor cytokine gene expression after tumor stimulation, the separated SMCs from immunized and non-immunized mice were used as effector cells and the tumor cells were used as target cells. Effector cells and target cells were co-cultured at an E:T of 20:1 for 6 h at 37° C. Then, SMCs were lysed with 350 μL of RLT buffer (Each group, n = 5). The samples were extract RNA for determine the gene expression.

3.1. Induction of Anti-Tumor Response with rNDV-TV

3.3. The Expression of Type I IFN Related Genes in Tumor Cell Lines

3.5. The Expression of ISGs in Tumor Cell Lines Treated with Rux

To confirm Th1 immune response to MBT-2 in immunized SMC, the IFN-γ gene expression in response to MBT-2 stimulation was calculated. The ratio of IFN-γ gene expression in the MBT-NDV-Rux immunized group was significantly increased compared with the MBT-NDV and control groups (Figure 6). This result showed the induction of Th1 immune response by rNDV-TV-Rux.

In summary, it was revealed that rNDV infectivity differed depending on tumor cell lines, and it was found to be due to the difference in ISG expression before infection. Moreover, by using JAK inhibitor, ruxolitinib, we succeeded in suppressing ISG expression before infection and improving the rate of rNDV infection in tumor cells. Then, rNDV-TV-Rux, which improved rNDV infection rate in ruxolitinib, increased CD8 + cells important for inducing anti-tumor response by this tumor vaccine and induced a Th1 immune response compared to rNDV-TV. These findings are useful as a strategy for rNDV low-infectious tumors. 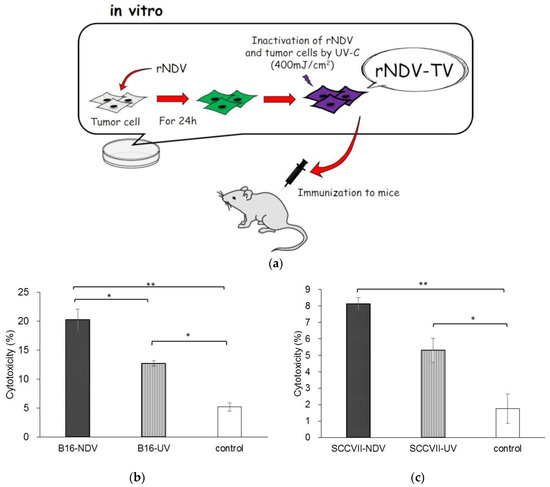 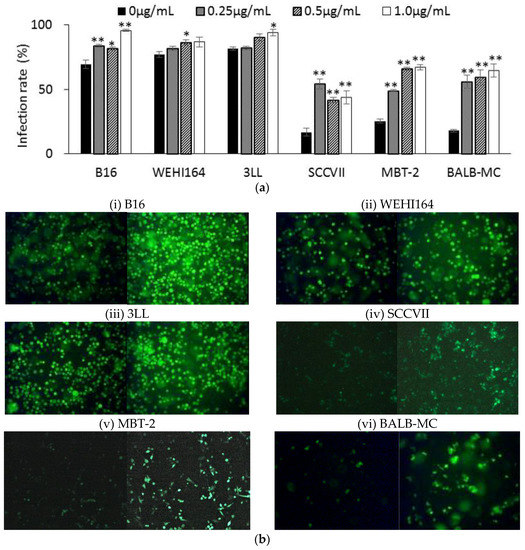 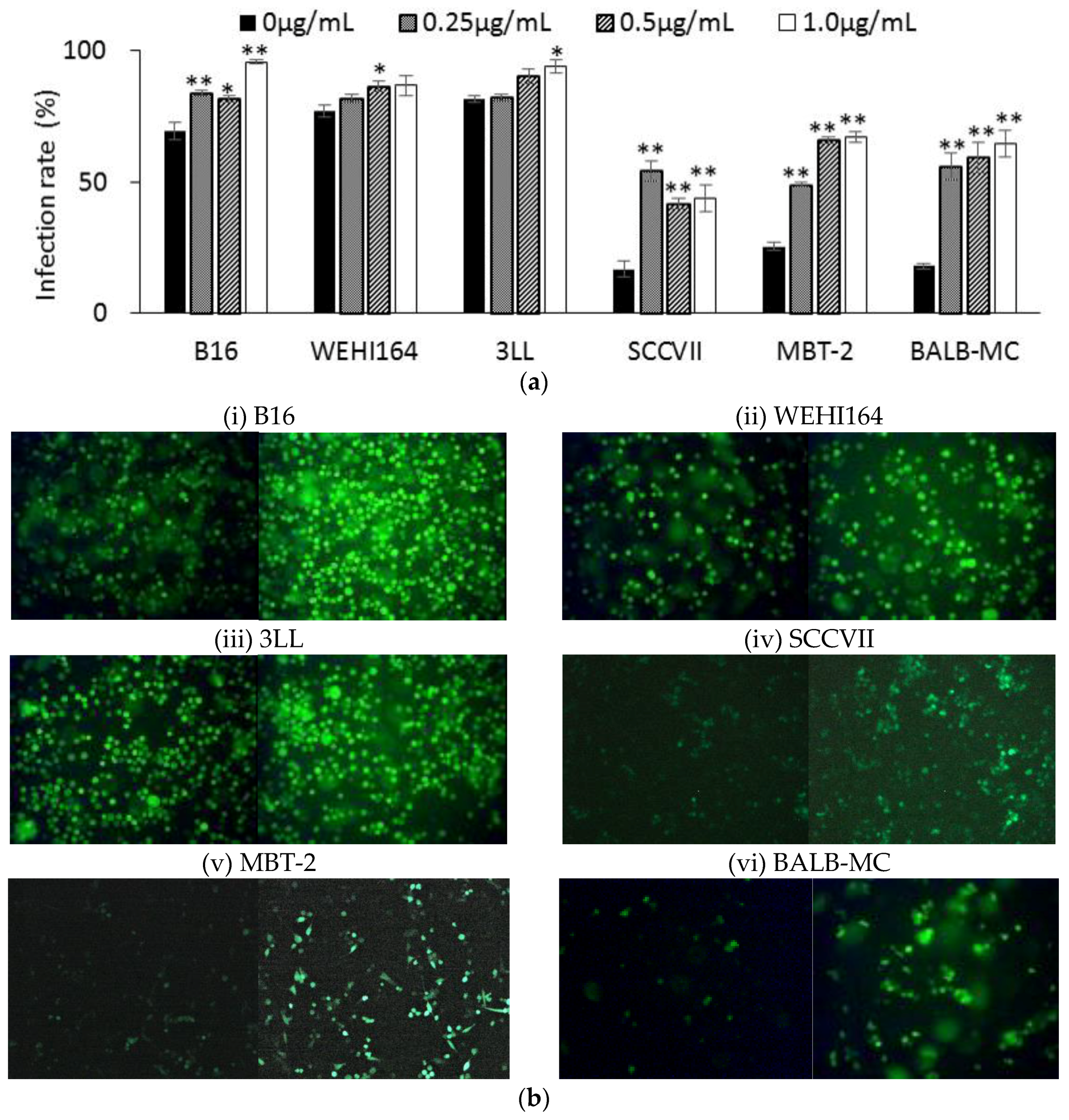 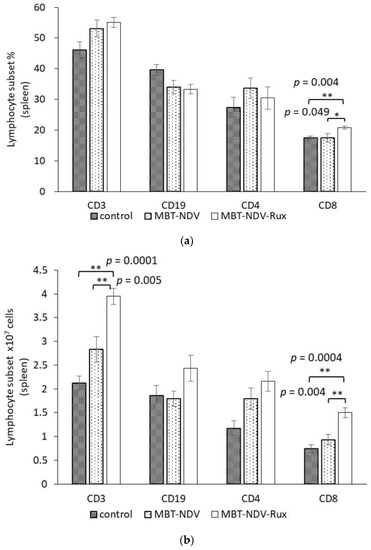 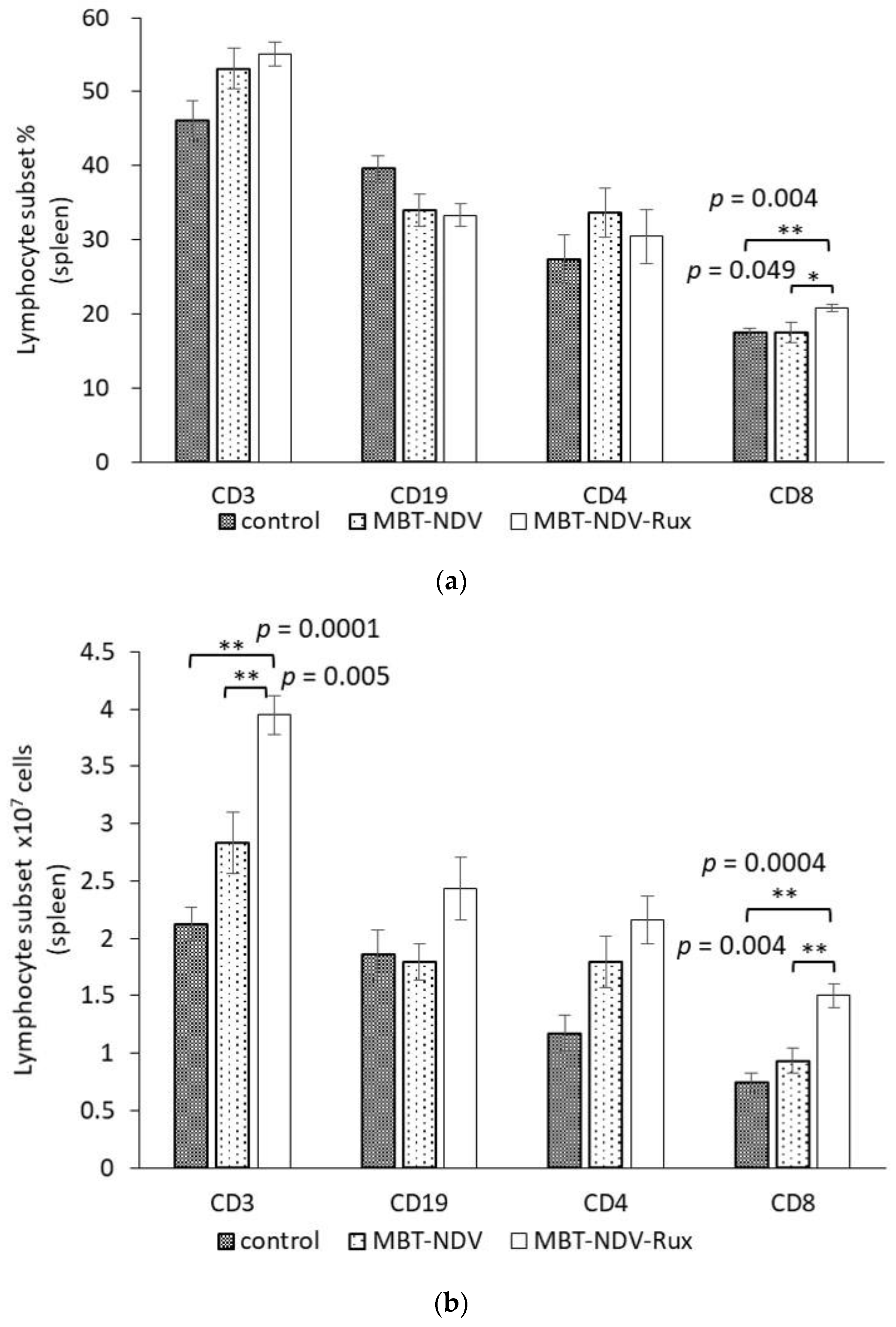 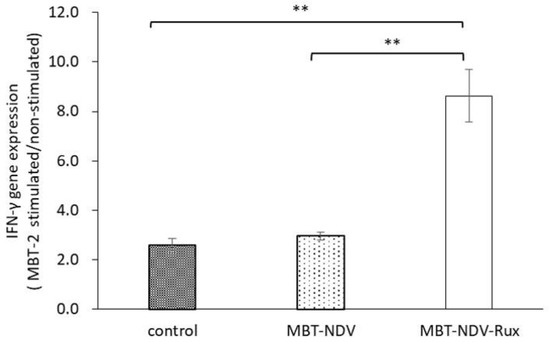