Back to the Future? The Fallopian Tube, Precursor Escape and a Dualistic Model of High-Grade Serous Carcinogenesis

Beginning with the discovery of the BRCA-associated ovarian cancer susceptibility genes and subsequent detailed examination of risk-reducing salpingo-oophorectomy (RRSO) specimens, a new paradigm of ovarian carcinogenesis has unfolded with attention to the distal fallopian tube. The primary focus has been an early cancer or neoplasm in the fallopian tube which is seen in virtually all incidentally discovered high-grade serous cancers in asymptomatic women. This high-frequency of tubal involvement in early serous neoplasm (usually in the form of serous tubal intraepithelial carcinoma—STIC) has galvanized attention to this organ as a primary source of this disease. However, an enduring mystery has been the relatively low frequency of STIC in the fallopian tubes of women with advanced malignancy. This paradox, a high frequency of tubal involvement early on and a low frequency of involvement later in the disease process, has spurred interest in other potential sources, such as the ovarian surface epithelium or cortical inclusions and the secondary Mullerian system. However, because essentially all high-grade serous carcinomas are linked by TP53 mutations, and because fallopian tubes frequently contain early serous proliferations (ESPs) with these mutations, attention has turned to the possibility that the nonmalignant but TP53 mutated tubal epithelium could be responsible for an eventual malignancy. Recent data have shown evidence of a lineage continuity between ESPs and concurrent serous carcinomas prompting the concept of “precursor escape”. This creates a second component of the paradigm by which cells from early precursors are shed from the tube and undergo subsequent malignant transformation, emerging suddenly as widespread intraperitoneal malignancy. This dualistic model thus provides a unique pathway by which the future outcome (wide spread high-grade serous carcinomas—HGSC) is ultimately explained by going back in time to an early serous proliferation. This paradigm also brings the peritoneal cavity into focus, raising new questions about the potential co-variables or exposures that might facilitate the occasional malignant transformation of an ESP in the peritoneal cavity or on the peritoneal surface. View Full-Text
Keywords: TP53; fallopian tube; high grade serous carcinoma; precursor; p53 signature; SEE-FIM TP53; fallopian tube; high grade serous carcinoma; precursor; p53 signature; SEE-FIM
►▼ Show Figures 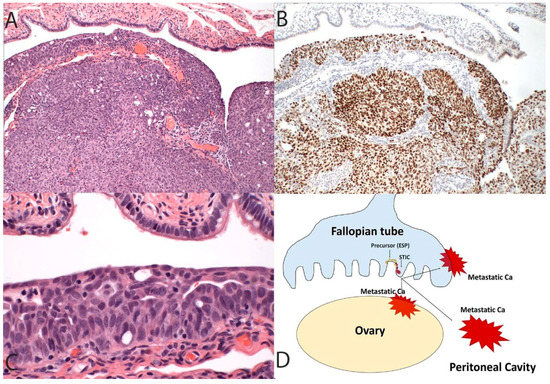