Pancreatic cancer has extremely poor prognosis and represents the fourth leading cause of cancer-related mortality in the world. Among the various malignancies ten-year (4.6% for males and 4.8% for females) and five-year (7.0% for males and 5.9% for females) survival rates in Japan are the worst for pancreatic cancer [1,2]. There are few effective therapies for pancreatic cancer, indicating the urgent need for development of more effective chemotherapies to improve the poor outcomes of this malignancy.
FOLFIRINOX, a combination chemotherapy of oxaliplatin, irinotecan, 5-fluorouracil (5-FU), and L-leucovorin, has been shown to significantly prolong survival and is currently a standard chemotherapy for advanced pancreatic cancer. Conroy et al. showed that FOLFIRINOX therapy exhibited clinical superiority over gemcitabine monotherapy with respect to overall survival (OS), progression-free survival (PFS), and tumor response rate (RR) in patients with metastatic pancreatic cancer [3]. However, grade 3–4 neutropenia occurs more frequently in patients treated with FOLFIRINOX than gemcitabine (45.7% versus 21.0%, p < 0.001). A high incidence of grade 3–4 neutropenia (77.8%) has also been observed in Japanese patients receiving FOLFIRINOX for metastatic pancreatic cancer [4].
To reduce the incidence of toxicities associated with FOLFIRINOX, the chemotherapy regimen has been modified by omission the bolus injection of 5-FU and/or reducing the dose of irinotecan without reducing the clinical response [5,6,7,8,9]. Modification of the FOLFIRINOX regimen (oxaliplatin 85 mg/m2, irinotecan 150 mg/m2, 5-FU infusion 2400 mg/m2 over 46 h, no bolus 5-FU) reduces the incidence of grade 3–4 neutropenia to 47.8% [7]. More importantly, a meta-analysis showed that the modified FOLFIRINOX regimen is as effective as the original, with a similar tumor response rate (32% versus 33%, p = 0.879), rate of 12-month survival (47% versus 50%, p = 0.38), rate of 6-month PFS rate (47% versus 53%, p = 0.38) and reduced frequency of grade 3–4 adverse events [10].
The occurrence of severe adverse events, including neutropenia [11,12], mucositis [13], neurotoxicity [14] and diarrhea [15], during cancer chemotherapy results in impaired patient quality of life and leads to the therapy interruption or dose reduction. The latter may lead to a reduction in the therapeutic effect due to the decrease in the relative dose intensity (RDI). For example, the incidence of grade 4 neutropenia is significantly higher, while median PFS and OS are significantly shorter in non-small cell lung cancer patients receiving irinotecan with UGT1A1*6 homozygous mutation compared to the heterozygous mutation or wild-type allele [16]. The incidence rates of diarrhea and neutropenia are significantly higher, while median OS tends to be shorter in metastatic colorectal cancer patients receiving irinotecan with UGT1A1*28 heterozygous or homozygous mutations compared to the wild-type allele [17].
In contrary, several investigators have shown that the occurrence myelosuppression such as neutropenia is a surrogate for better survival in patients receiving cancer chemotherapy. In patients with metastatic colorectal cancer who receive FOLFOX therapy, the incidences of mild (grade 1–2) and severe (grade 3–4) neutropenia are associated with improved survival [18]. In patients with advanced pancreatic cancer who received gemcitabine alone or in combination with other anticancer drugs, the median OS is significantly longer in patients with early onset of neutropenia than in those without neutropenia [19]. Comparison of the effect of gemcitabine monotherapy on survival among metastatic pancreatic patients with grade 3 neutropenia, those with grade 1–2 neutropenia and those without neutropenia also shows that the median survival time is prolonged with increasing grade of neutropenia [20]. Therefore, the incidence neutropenia may have different effects on the survival period, depending on the cancer type and chemotherapy regimen.
We investigated the relationship between the incidence of severe neutropenia and OS in patients with advanced pancreatic cancer who received modified FOLFIRINOX as first-line chemotherapy to determine whether or not the incidence of severe neutropenia causes favorable survival outcomes in these patients

2.2. Comparison of the Efficacy of Modified FOLFIRINOX between Patients with and without Severe Neutropenia

2.3. Relationship between Other Factor and Prolonging Survival

To assess the relationship between candidate of prognostic factors and OS, multivariable Cox proportional hazard regression analyses were performed. With or without distant metastasis, CRP, CA19-9, NLR and modified glasgow prognostic score (mGPS) were treated as candidate of prognostic factors, and CRP, CA19-9, NLR and mGPS were treated as continuous variables. Multivariable analysis indicated that NLR was significantly associated with prolonged OS in patients with advanced pancreatic cancer who received modified FOLFIRINOX therapy (Table 4).

To assess the relationship between time to neutropenia (grade ≥3) and factors which patient had at baseline, multivariable Cox proportional hazard regression analyses were performed. Neutrophil and total bilirubin were treated as continuous variables. Among these factors, Cox proportional hazard analysis showed that total bilirubin (hazard ratio [HR]: 2.65, 95% CI: 1.13–6.19, p = 0.024) was a significant risk factor for severe neutropenia (Table 5).

2.5. Comparison of the Incidence of Other Adverse Events between Patients with and without Severe Neutropenia

No significant differences in the incidence rates of such adverse events as nausea (grade ≥2), vomiting (grade ≥1), oral mucositis (grade ≥2), dysgeusia (grade ≥2), peripheral neuropathy (grade ≥2), diarrhea (grade ≥2), and thrombocytopenia (grade ≥2) were observed between patients with and without severe neutropenia (Table 6).

A total of 69 patients with advanced pancreatic cancer received first-line modified FOLFIRINOX in our outpatient chemotherapy clinic during the period between January 2014 and May 2018. Among them, 18 patients were excluded from the present study because they were treated with reduced initial doses of irinotecan due to harboring a homozygous mutation in UGT1A1 genes such as UGT1A1*28/*28, UGT1A1*6/*6 and UGT1A1*28/*6 (n = 2), poor performance status (≥2 according to the Eastern Cooperative Oncology Group) (n = 9), or limited duration of therapy less than three cycles (n = 7). Data from the remaining 51 patients were analyzed in the present study. Data were obtained from electronic medical record in our hospital and analyzed retrospectively.
The present study was conducted in accordance with the guideline for human studies adopted by the ethics committee of the Gifu University Graduate School of Medicine and notified by the Japanese government (Institutional review board approval No.26-156). In view of the retrospective nature of the study, the need for informed consent from subjects was not mandated.

Patients were treated with modified FOLFIRINOX every 2 weeks, consisting of 2 h bolus injection of oxaliplatin at 85 mg/m2, 2 h bolus injection of L-leucovorin at 200 mg/m2, 90 min bolus injection of irinotecan at 150 mg/m2, followed by continuous infusion of 5-FU for 46 h at 2400 mg/m2 without bolus 5-FU. Patients were all administered an initial regular dose of chemotherapy in the first cycle. Dose reduction was performed in the subsequent chemotherapy cycle for patients who suffered from severe adverse events, particularly grade 3–4 neutropenia. In these patients, dose escalation was not performed even if the adverse events disappeared. The criteria for dose reduction was chosen according a Japanese phase II study on modified FOLFIRINOX [6]. Briefly, treatment was delayed when one or more of the following adverse events occurred: grade 3–4 neutropenia or thrombocytopenia, febrile neutropenia, total bilirubin >3.0 mg/dL, aspartate transaminase and alanine transaminase >150 U/L, creatinine >1.5 mg/dL, grade 3–4 peripheral neuropathy, and grade 3–4 diarrhea. Treatment was restarted after recovery from the severe adverse events, but the doses of oxaliplatin, irinotecan, and 5-FU were reduced to 65 mg/m2, 120 mg/m2, and 1200 mg/m2, respectively.

Heterozygous mutation in UGT1A1 genes such as UGT1A1*6/*1 or UGT1A1*28/*1, low neutrophil count and high total bilirubin concentration have been reported as risk factors for severe neutropenia in advanved colorectal cancer patients who received irinotacan-based regimen [36]. Therefore, these risk factors for severe neutropenia were examined using multivariable Cox proportional hazard analysis with adjustment for age and sex. Neutrophil and total bilirubin were treated as continuous variables.

The distant metastasis [38], CRP [38,39,40], CA19-9 [39,41,42], NLR [40,43,44,45,46,47,48] and mGPS [43,49] have been reported as prognostic factors in pancreatic cancer patients. To clarify the confounding of these factors with neutropenia on prolongation of survival, multivariable Cox proportional hazard analysis with adjustment for age and sex was performed. CRP, CA19-9, NLR and mGPS were treated as continuous variables.

Data were analyzed by using IBM SPSS version 22 (IBM Japan Ltd., Tokyo, Japan) and R software version 3.5.1 (www.r-project.org). p-values less than 0.05 were considered significant. The characteristics of patients were summarized by median with 25th and 75th percentiles for continuous variables. Frequencies and percentages were shown for categorical variables. The Simon and Makuch’s modified Kaplan-Meier survival curves [50] was used to account for time varying exposure. For primary analysis, Cox proportional hazards regression was used to evaluate the association between severe neutropenia as a time varying exposure and OS as an outcome with adjustment for covariates. Covariates were restricted to two variables to avoid overfitting, and included age and NLR on the basis of clinical judgement and previous research, owing to their expected strongly associations with the outcome and severe neutropenia. Secondary multivariable cox regression analyses were performed to assess the association between neutropenia and potential factor with adjustment for age and sex. The reliability of the regression model was internally validated via bootstrap method by measuring of overfitting quantified by optimism parameter in a calibration plot. Bootstrap validation was performed with one hundred fifty resampling. The square of the coefficient of correlation (r) was calculated as a measure of the linearity of the relationship between the two variables.

Our study presented the first evidence that severe neutropenia is significantly associated with better survival in patients with advanced pancreatic cancer receiving modified FOLFIRINOX therapy. Incidence of severe neutropenia may be a useful index for the survival outcome of pancreatic cancer patients receiving modified FOLFIRINOX therapy. 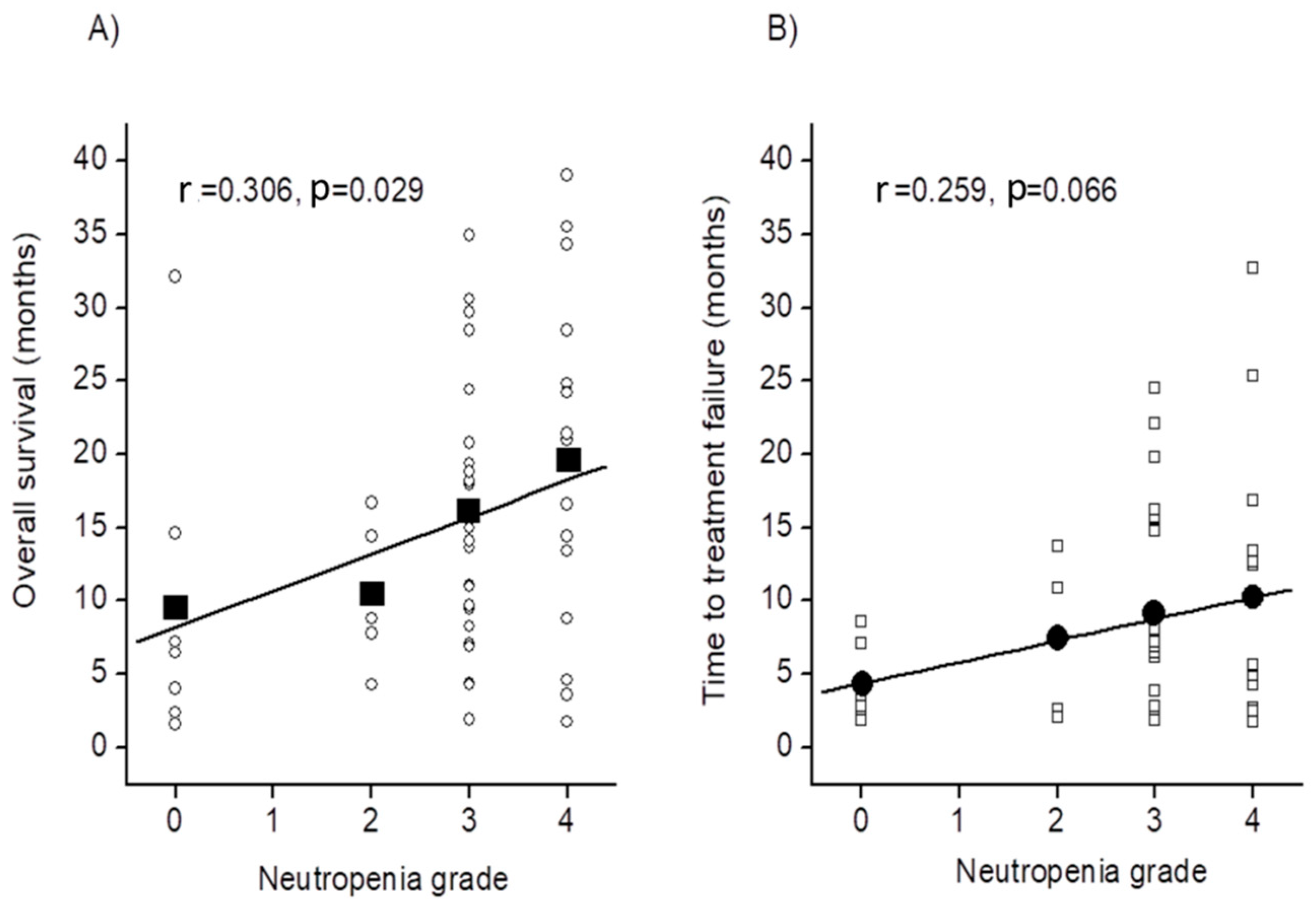