We synthesized silver nanowires (AgNWs) with a mean diameter of about 120 nm and 20–70 μm in length using a polyol process. The flexible transparent conductive AgNWs films were prepared using the vacuum filtration-transferring process, in which random AgNWs networks were transferred to a polyethylene terephthalate (PET) substrate after being deposited on mixed cellulose esters (MCEs). Furthermore, the photoelectric and mechanical properties of the AgNWs films were studied. The scanning electron microscopy images show that the AgNWs randomly, uniformly distribute on the surface of the PET substrate, which indicates that the AgNWs structure was preserved well after the transfer process. The film with 81% transmittance at 550 nm and sheet resistance about 130 Ω·sq−1 can be obtained. It is sufficient to be used as a flexible transparent conductive film. However, the results of the bending test and tape test show that the adhesion of AgNWs and PET substrate is poor, because the sheet resistance of film increases during the bending test and tape test. The 0.06 W LED lamp with a series fixed on the surface of the AgNWs-PET electrode with conductive adhesive was luminous, and it was still luminous after bent. View Full-Text
Keywords: silver nanowires; flexible transparent film; polyethylene terephthalate; sheet resistance silver nanowires; flexible transparent film; polyethylene terephthalate; sheet resistance
►▼ Show Figures 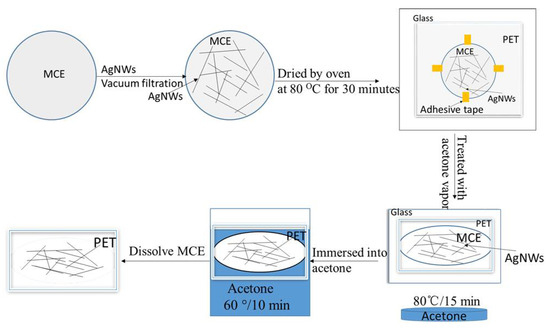