Compensation of Hysteresis on Piezoelectric Actuators Based on Tripartite PI Model

The novel concept of a microfluidic chip with an integrated three-dimensional fractal geometry with nanopores, acting as a gas transport membrane, is presented. The method of engineering the 3D fractal structure is based on a combination of anisotropic etching of silicon and corner lithography. The permeation of oxygen and carbon dioxide through the fractal membrane is measured and validated theoretically. The results show high permeation flux due to low resistance to mass transfer because of the hierarchical branched structure of the fractals, and the high number of the apertures. This approach offers an advantage of high surface to volume ratio and pores in the range of nanometers. The obtained results show that the gas permeation through the nanonozzles in the form of fractal geometry is remarkably enhanced in comparison to the commonly-used polydimethylsiloxane (PDMS) dense membrane. The developed chip is envisioned as an interesting alternative for gas-liquid contactors that require harsh conditions, such as microreactors or microdevices, for energy applications.
Keywords: nanonozzles; gas permeation; fractal geometry; corner lithography; integrated membrane chip nanonozzles; gas permeation; fractal geometry; corner lithography; integrated membrane chip

The importance of membranes in microfluidic systems is reflected by numerous applications, including the detection of chemical reagents and gases, drug screening, cell culture, protein separation, chemical synthesis at the small-scale, and electrokinetic and hydrodynamic fluid transport [1,2]. In particular, when the role of the membrane is to act as a gas-liquid interface, effective gas absorption and minimal gas leakage is required [3]. The key issue for the combination of membranes and microfluidics is the sealing of the interfaces to avoid leakage, especially in the case of gases. The most convenient strategies to do this include (i) fabrication of the membrane as an integral part of the silicon chip; and (ii) exploiting the permeation properties of certain polymers by fabricating the chips directly from these materials [2]. In the case of biological applications this last option has been adopted in most of the cases by using polydimethylsiloxane (PDMS) chips; it is well known that this polymer possesses high oxygen permeability [4]. However, when chemical or temperature resistance is needed, the use of silicon chips is preferred.
In recent years, at the University of Twente, an elegant fabrication method has developed, which is based on a combination of anisotropic etching of silicon and so-called corner lithography, to create small nanoapertures of approximately 80–100 nm in the form of a three-dimensional fractal geometry [5,6]. Fractal geometry describes disciplines that consider symmetry-broken structures where, after a magnification, the shape appears identical. In other words, the magnified piece is almost a copy of the whole. The important features of the mentioned fabrication process are the possibility to easily scale up to the wafer-level and the ability to tailor the number of apertures and, thus, control the diffusion of gases through them. These apertures are distributed on the corners of pyramids which are part of a 3D fractal structure that can be replicated. This fact adds an additional advantage that could not be achieved in other 2D materials that are easily integrated with silicon microfluidics, such as porous silicon or anodized alumina. The 3D fractal structure can be embedded in a microchannel, which results in a larger interfacial area and a higher surface to volume ratio.
The hypothesis in the presented research is that the concept of membranes made of 3D fractals containing nanoapertures (also referred to as nanonozzles in this work) will result in effective gas permeation. To test this, the 3D fractal structure containing nanoapertures is integrated in a microfluidic channel and gas permeation through the pores is measured in order to quantify the diffusion of the gases oxygen and carbon dioxide through the fractal membrane. The measured values are validated with a model that considers the combination of the viscous and molecular flow regimes, the latter being the dominant mechanism for diffusion through the nanonozzles.

2.1. Integration of Fractals in Microchannels

The main considerations in the design of a proposed chip for gas diffusion in a channel are: (1) the number of fractal fabricated levels, which is directly connected with the number of openings; (2) the number of fractals in the channel; (3) the space between them; and (4) the distance from one phase to another, i.e., the depth of the channel, which is related to the diffusion distance.
The fractal structures were fabricated in a channel 3.5 cm long and 500 μm (Chip 1) or 300 μm (Chip 2) wide, containing a total of 244 (Chip 1) and 308 (Chip 2) 3rd-generation fractals unevenly distributed along the channel. Before the experiments, the total number of fractals containing opening pores was evaluated by optical microscopy; the final number of estimated pores and characteristics of the chips are presented in Table 1. The channel containing fractal structures was anodically bonded to a glass wafer with powder-blasted holes and assembled together with another wafer containing a single channel 380 μm deep and the same width and length as the fractal channels. Figure 5 shows a schematic representation of the final chip cross-section, containing a single free-hanging fractal for simplicity.
To connect the microchip to external piping in order to be able to perform the permeation experiments, a fractal holder was designed and 3D printed (RapidShape GmbH, Heimsheim, Germany S30L). Four identical parts were printed from a photopolymer resin and the chip was sandwiched in between two parts at the inlet, and two parts at the outlet of the chip. The holder parts were connected by two pins of 1.5 mm diameter. Each fractal holder part consisted of a thread (3.95 mm diameter, 0.7938 threading and32 pitch) in order to connect the external capillary, 360 μm in diameter (Teknokroma, Tubing Fused Silica, Barcelona, Spain), through the Nanoport fittings (IDEX Health and Science, Nanoport Fittings, Oak Harbor, WA, USA) to enable the transfer line (3.2 mm in diameter) connection of the feed and sweep gases at the inlet, as well as the retentate and permeate gases at the outlet (see Figure 6).

The experimental system for gas permeation (see Figure 7) consists of: (1) gas sources; (2) mass flow controllers (Brooks, 5850 TR, Seattle, WA, USA); (3) pressure transducer (Panasonic, DP2-41E, Kadoma, Japan); (4) microfluidic fractal chip; and (5) micro-gas chromatograph (Micro-GC, Varian CP-4900, EVISA, Palo Alto, CA, USA). Two bubble meters were placed at the retentate and permeate sides, respectively, to ensure that the total flow inlet corresponds to the total flow outlet.
The permeation of two gases was measured: O2 (purity grade 99.999% Praxair, Zaragoza, Spain) and CO2 (high-purity grade 99.998% Praxair, Zaragoza, Spain). One of these two gases, pure, was introduced to the feed chamber at a given flow rate, controlled by the mass flow controller (MFC). The retentate was pressurized by a regulating valve located downstream (see Figure 7), and the pressure was measured by a pressure transducer (PI) at the entrance of the feed side. The flow of the pure gas was varied between 10 and 20 cm3 (STP)/min which resulted in a pressure in the feed side of 21.7 to 2.7 × 105 Pa. The pressure drop along the retentate channel was calculated by solving the Navier-Stokes equation in COMSOL Multiphysics® software and ranges from 3.5 to 6.8 × 103 Pa. The sweep gas (He, purity grade 99.999% Praxair, Danbury, CT, USA) was introduced to the permeate chamber of the fractal microfluidic chip at a constant flow rate, 10 cm3 (STP)/min, and the pressure measured at the entrance was 1.1 × 105 Pa. The pressure drop along the permeate channel was also calculated and corresponds to 95 Pa and 263 Pa for Chip 1 and Chip 2, respectively. The outlet of the permeate side was maintained at atmospheric pressure. Thus, the ΔP (driving force) between two chambers was in the range of 0.6 to 1.6 × 105 Pa. The gas permeated through the nanoapertures to the permeate side and the mixture He + gas (CO2 or O2) was analysed in the micro-GC (Varian CP-4900) equipped with two modules, one with a M5A mole-sieve column and the other with Pora PLOT Q (PPQ) column. He was used as a carrier gas in both columns. The micro-GC was calibrated in the range of 2.5% to 4.5% in volume for CO2 and O2.
The mass transport coefficient, permeance, was calculated as the molar flow of the permeating gas per unit of membrane area divided by the driving force, according to Equation (1): where Pi is the permeance of the gas (i.e., O2 or CO2) [mol/m2·s·Pa], Qperm is the total molar flow of the permeate [mol/s], Yi is the molar fraction in the permeate side, A is the area of the membrane (see Table 1), and ΔPi corresponds to the driving force for permeation of “i” species and is the difference between the partial pressure in the feed side and the permeate side, respectively.

In this work, we have validated the concept of a new 3D membrane structure incorporated in a chip for gas transfer between two microfluidic channels. We experimentally measured and theoretically calculated, considering a simplified model and several assumptions, the permeation of oxygen and carbon dioxide. The chip is characterized by portability, increased contact surface, and mechanical stability since the membrane is embedded in a silicon wafer. Therefore, there is no risk of thin film deflection or material swelling. Moreover, due to the compactness of the system, the distance for diffusion was extremely reduced which resulted in the decreased travelling time and path of the molecules. This approach could work as an alternative to PDMS membranes since the permeation flux obtained through the nanonozzles in the 3D fractals is high.
Other applications apart from the single gas permeation tested here include gas-liquid contactors, where the 3D structure presents an advantage due to the higher surface-to-volume ratio compared to 2D membranes, and also applications requiring high temperatures and gas reactant distribution or product removal, such as micromembrane microreactors [15].

The authors would like to acknowledge Mark Smithers (NanoLab, MESA+ Institute for Nanotechnology) for the acquisition of SEM images. The authors would like to acknowledge the financial support from the Government of Aragon and the Education, Audiovisual and Culture Executive Agency (EU-EACEA) within the EUDIME—“Erasmus Mundus Doctorate in Membrane Engineering” program (FPA 2011-0014, SGA 2012-1719, http://eudime.unical.it).

The authors declare no conflicts of interest 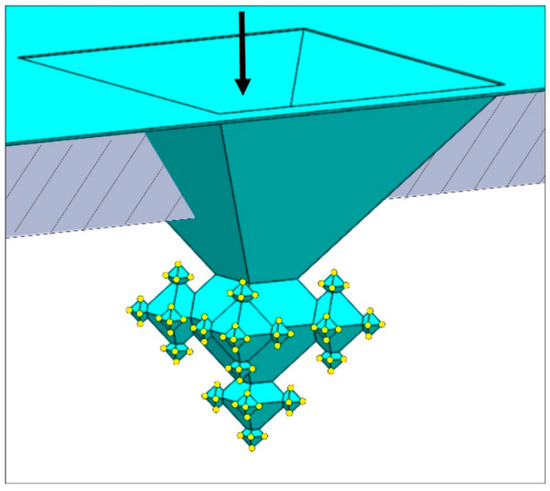 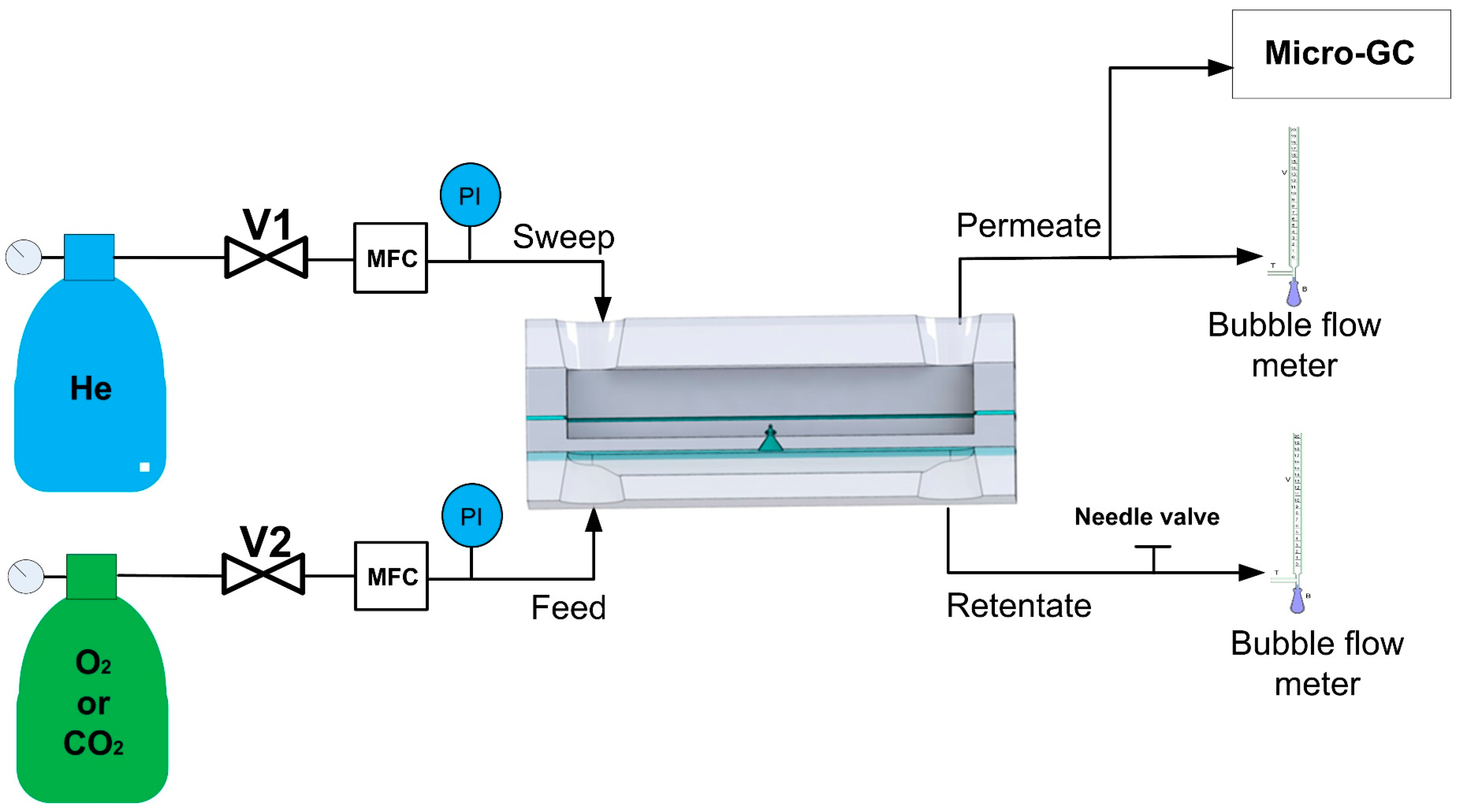 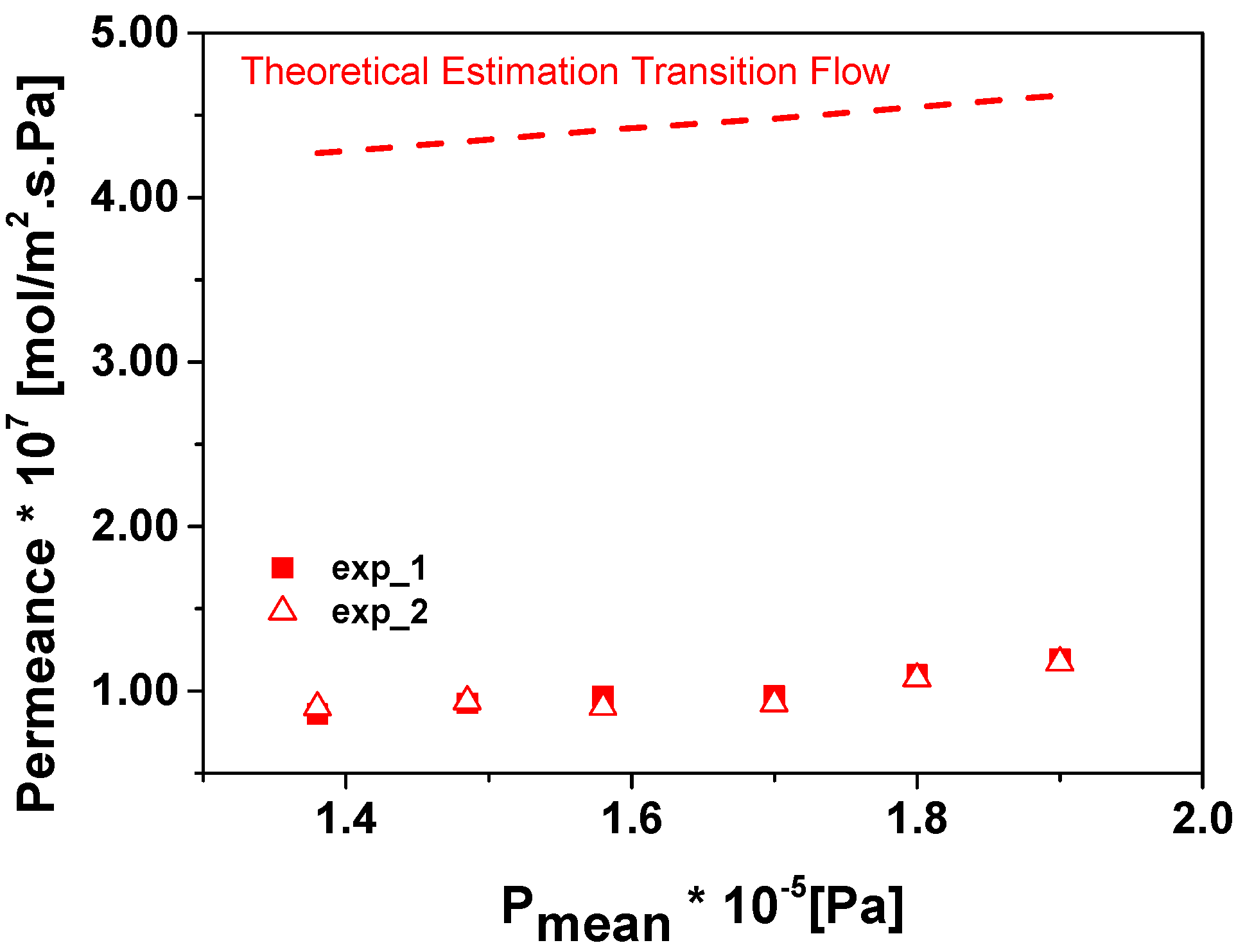