Editorial for Special Issue: Advances in Microfluidic Devices for Cell Handling and Analysis
Next Article in Special Issue

Drug delivery, minimally-invasive surgery, and a hospital-in-the-body are highly desirable for meeting the rapidly growing needs of nanorobot. This paper reports a Z-shaped gold/platinum (Au/Pt) hybrid nanorobot which realizes the self-rotational movement without an external force field. The Z-shaped Au/Pt hybrid nanorobot was fabricated by focused ion beam (FIB) and plasma sputtering. The purity of the nanorobot was tested by energy dispersive X-ray analysis (EDS). The weight percentage of Pt and Au at the tip were 94.28% and 5.72%, respectively. The weight percentage of Pt and Au at the bottom were 17.39% and 82.75%, respectively. The size of the nanorobot was 2.58 × 10−16 m2 and the mass of the nanorobot was 8.768 × 10−8 kg. The driving force of the nanorobot was 9.76 × 10−14 N at the 6.9% concentration of hydrogen peroxide solution. The rotation speed was 13 rpm, 14 rpm, and 19 rpm at 5.6%, 6.2%, and 7.8% concentrations, respectively. View Full-Text
Keywords: nanorobot; self-actuation; drug delivery system nanorobot; self-actuation; drug delivery system
►▼ Show Figures 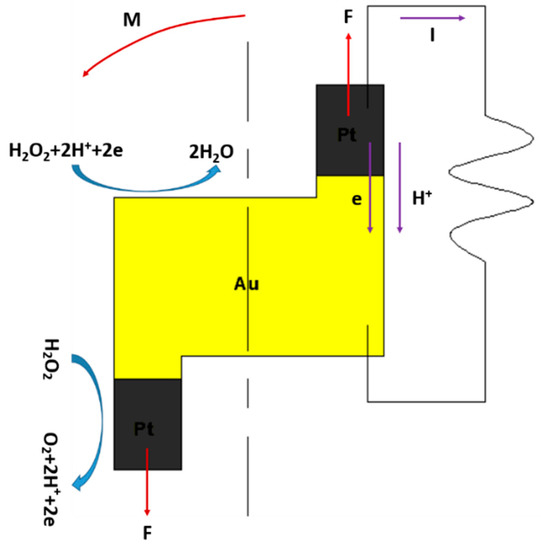