Microfluidic Device to Measure the Speed of C. elegans Using the Resistance Change of the Flexible Electrode
Previous Article in Journal

Micro-electro-mechanical systems (MEMS) are becoming mainstream using recent micro-fabrication methods (e.g., silicon bulk micro-machining and surface micro-machining [1]). Biaxial micro-mirrors are among MEMS devices adopted in numerous areas, such as laser imaging, image digitizing, projection displays [2] and medical applications [3], e.g., endoscopy and tomography. Features to be mostly considered for micro-mirrors include simple fabrication processes, low driving voltages, large tilt angles and linearized angular scans [4]. Actuation mechanisms used for micro-mirrors include electrostatic [5,6], piezoelectric [7,8], electrothermal [9] and electromagnetic [10,11] actuators. Electrostatic actuators are the most popular because of their easy fabrication, low power consumption and high driving speed [12]. However, they require large operating voltages to create large tilting angles. Furthermore, for the MEMS devices that use parallel plate capacitors, pull-in instability is an important concern [13]. Electrothermal actuation provides large deflection angles at low voltages at the cost of low driving speed, large energy consumption and possible changes in optical behavior caused by fluctuating temperatures [14]. Piezoelectric actuators are faster and use lower driving voltages compared to electrothermal devices [7]. However, they are difficult to fabricate. Electromagnetic actuators can achieve large mechanical tilting angles [10], but at the price of a larger size. Among these actuation types, the electrostatic actuator is preferred due to the ease of fabrication in large volumes. Common electrostatic actuator sub-types are the comb-drive and parallel plate. Parallel plate actuators are preferred because of their smaller size compared to comb-drive actuators, but they suffer from pull-in voltage. Because of the nature of electrostatic force, electrostatic MEMS actuators have strong nonlinear behavior, which has been investigated during the past decade [15,16,17,18].
A mirror actuated by sidewall and bottom electrodes was presented by Bai et al. [19]. The sidewalls added forces needed to increase the mirror’s angles of rotation about two perpendicular axes. Static and dynamic models of the mirror were introduced by Bai et al. [19]; however, these models were unable to predict the nonlinear dynamic responses they reported experimentally. A comprehensive model that accurately predicts a MEMS mirror’s response to voltage excitation would be useful in characterizing optical scanning applications. In our earlier study [20], we presented static modeling of the mirror with sidewall electrodes.
The contribution of this study is to improve the model of the MEMS mirror with sidewalls by accounting for the increased forces and torques on the mirror as the rotation angle increases. Thorough modeling of the electrostatic field more accurately predicts the nonlinear static response and, for the first time, results in close agreement of the simulated nonlinear dynamic response with the experimental results. The analytical model now explains the dominant quadratic nonlinearity in the system, and we verified the prediction with evidence from secondary resonances in the experiments.
The structure of the paper is as follows: the static modeling and simulation of the MEMS mirror under electrostatic forces from sidewall and bottom electrodes is presented. Dynamic modeling and simulation that include the effect of forcing on the frequency responses are presented next in this paper. Finally, secondary resonances evident in experimental data are explained using a mathematical analysis of the equation of motion.

The global coordinate is fixed at the center of the initial position of the mirror. The body fixed coordinate is fixed at the center of the mirror plate and rotates with the micro-mirror. Rotations about the X and Y axes are independent. Using the defined coordinate systems, expressions of the forces and torques on the mirror from sidewall electrodes, gimbal frame and bottom electrodes are obtained in this section for angle α. The derivations for angle β may be obtained by following the same method.

When the micro-mirror is actuated by sidewall electrodes, the electrostatic forces and torques will be balanced by mechanical restoring forces and torques.
The micro-mirror model has a serpentine torsion bar with the spring constant equation [19] of: where , are the rotational stiffness of corresponding axis and is the translational stiffness of the serpentine spring. For α and β rotation angles, the polar moment of inertia () and the cross-section area moment of inertia (I) are [22]: where was used in the series expansion. Furthermore, in Equation (19), and w are the thickness and width of the serpentine spring, respectively given in Figure 2. The mirror dimensions are provided in [19].

For obtaining the rotation angles, the summation of all of the torques in corresponding directions of x and y are found considering the voltages of each quadrant. Equation (18) was solved at different differential voltages, as indicated in Equations (1) and (3). In the simulations, the fringe field effect from the mirror thickness is considered negligible. Figure 5a,b shows the rotation angles β and α versus differential voltage when bias voltage and ranges from 0–150 V, and Figure 5c shows the vertical displacement of the center of the mirror. There was no experimental data to compare, but as can be seen, the vertical displacement is negligible. In Figure 5a,b, the present model can predict the nonlinear trend in the experimental static response with a close agreement, while the previous model [19] reveals a linear trend and diverges from the experiment beyond 1.7 degrees. The close prediction of nonlinear response in our model is from considering the electrostatic forces on the mirror’s top surface when the angles increase, which was not included in the prior work [19]. The accuracy in predicting static nonlinearity helped us in the simulation of nonlinear dynamic response (Section 3), which has not been reported previously. It should be noted that for α angle simulations, we used the nominal dimensions, as listed in Figure 2, for calculating serpentine stiffness. For the angle beta, we used the effective serpentine dimensions of m, m, m, m and m to account for the difference in the spring stiffness about the two axes. Same dimensions are used for dynamic simulations.

In this section, we investigate the dynamic behavior of the mirror for different excitation voltages. Our mirror is excited by AC and DC combined loads. in static simulation is replaced by voltage. The governing equation of motion can be obtained using Lagrange’s equation. Lagrange’s equation may be written:
In this equation, is a generalized coordinate, V is the potential energy, T is kinetic energy, D is the Rayleigh dissipation function that depends on viscous damping and Γ is the torque applied to the system from electrostatic actuation. The rotational motion of the mirror is described by two generalized coordinates of α and β. The potential energy of the mirror is given by Equation (22): where and are the torsional stiffness of serpentine for α and β. Furthermore, is the bending stiffness of the serpentine for vertical motion. The change in height of the center of mass is significantly small, so the potential energy of the mirror plate and gimbal frame can be neglected. The total kinetic energy equation is given as: where ρ is the density of mirror material, and are the mass moment inertia of the mirror plate and gimbal, and are length and thickness of the mirror plate, respectively, and are the masses of the plate and gimbal frame, respectively, and , , , and are the mirror outer width, gimbal outer length, mirror inner width, gimbal inner length and thickness of gimbal frame, respectively. The last parameter for Lagrange Equation (21) is energy dissipation. where and represent damping coefficients for rotations about x and y, respectively. Substituting the relevant terms into Equation (21), we obtain the equations of motion for α and β: where , , and natural frequencies about the X-, Y- and Z-axis are =, =, =. The state space equation can be written:

The transient response and frequency response of the dynamic behavior were simulated using the Runge–Kutta numerical integration method assuming zero initial conditions. Comparing to the experimental data from [19], we estimated the damping ratios as for α and β scanning angles, respectively. The damping ratios about two axes of rotations are different, as the corresponding resonance frequencies are not the same. Furthermore, note that because of the geometrical constraints, the maximum reachable α angle is around 19 degrees and the β angle is around 35 degrees, since the gimbal and the mirror plate hit the substrate, respectively. The simulations presented below are within these maximum angle ranges. In Figure 6a, the frequency responses of the scanning angles at = 55 V are presented. Figure 6b demonstrates the frequency response of the vertical displacement at = 55 V. The numerical simulation for scanning angles shows good accuracy with the experimental results. These figures also show that for both the α and β angles, superharmonic resonances at orders of two are observed, as reported in the experimental data. It should be noted that secondary resonances have not been reported for the mirror with sidewall electrodes in the literature. There is a slight difference between experiments and simulation that can be explained from the deviation of nominal dimensions after fabrication. The authors did not have access to the actual device to measure the exact dimensions under an optical profiler to examine the variation of thickness across the mirror plate or the gimbal frame. These variations are responsible for the mismatch of the resonant frequencies.

Mathematical modeling and dynamic simulation of a bi-axial MEMS mirror with sidewall and bottom electrodes are presented here that are in close agreement with the reported experimental data. We account for the increase of electrostatic field as the rotation angle increases and are able to predict the nonlinear dynamic behavior. The analytical model describes softening behavior and nonlinear superharmonic resonances observed in the experiment. The electrostatic force causes an electromechanical coupling effect that acts as a quadratic stiffness term responsible for frequency softening the superharmonic resonance of order two. The effect of damping on the frequency response of the mirror is examined, which revealed that superharmonic resonances become more significant. The presented performance analysis of the mirror with sidewall electrodes is valuable for predicting the mirror behavior in laser steering applications.

The authors would like to thank the Turkish Military Academy (Ankara) for a PhD scholarship to support this research study. 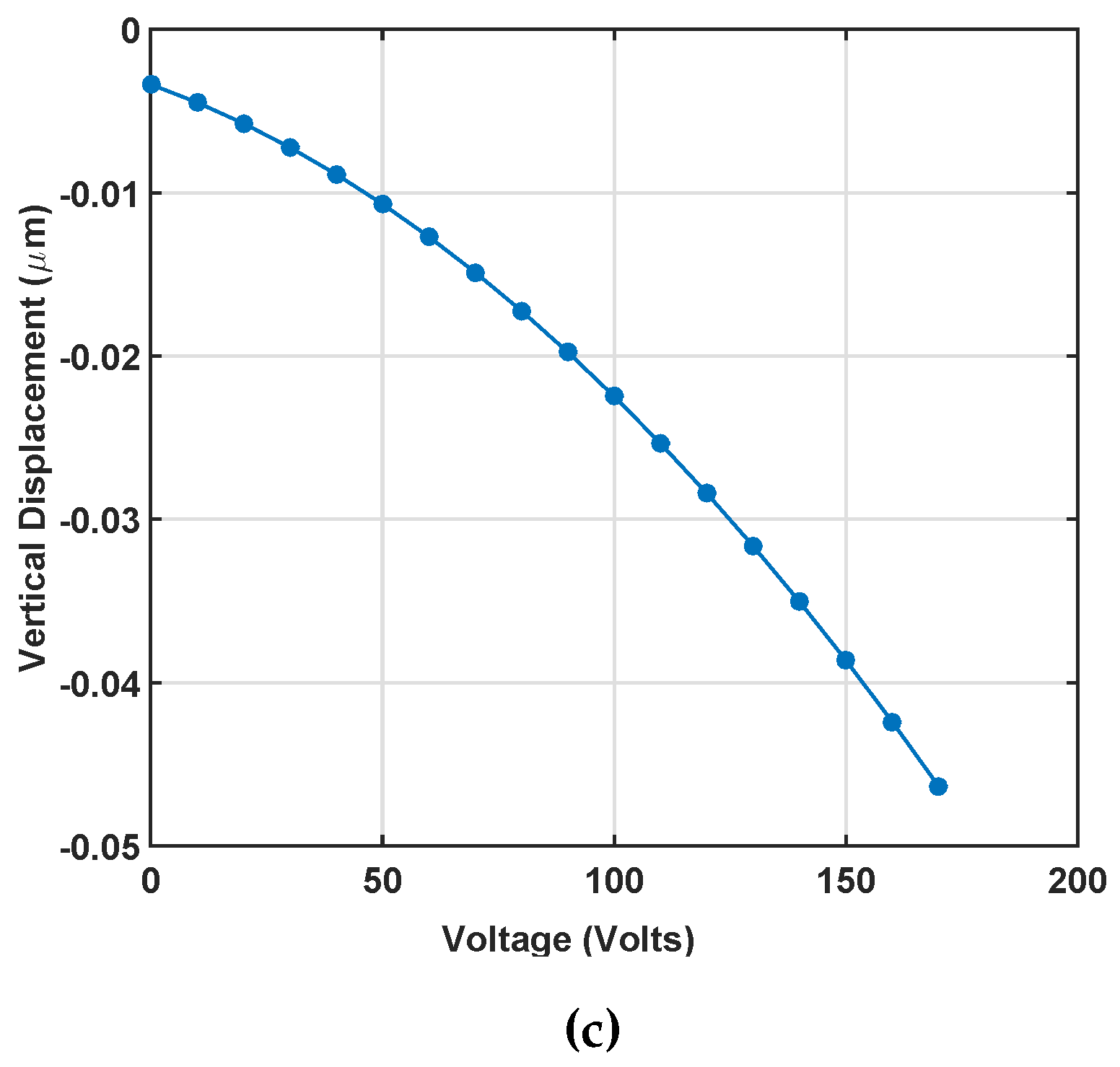 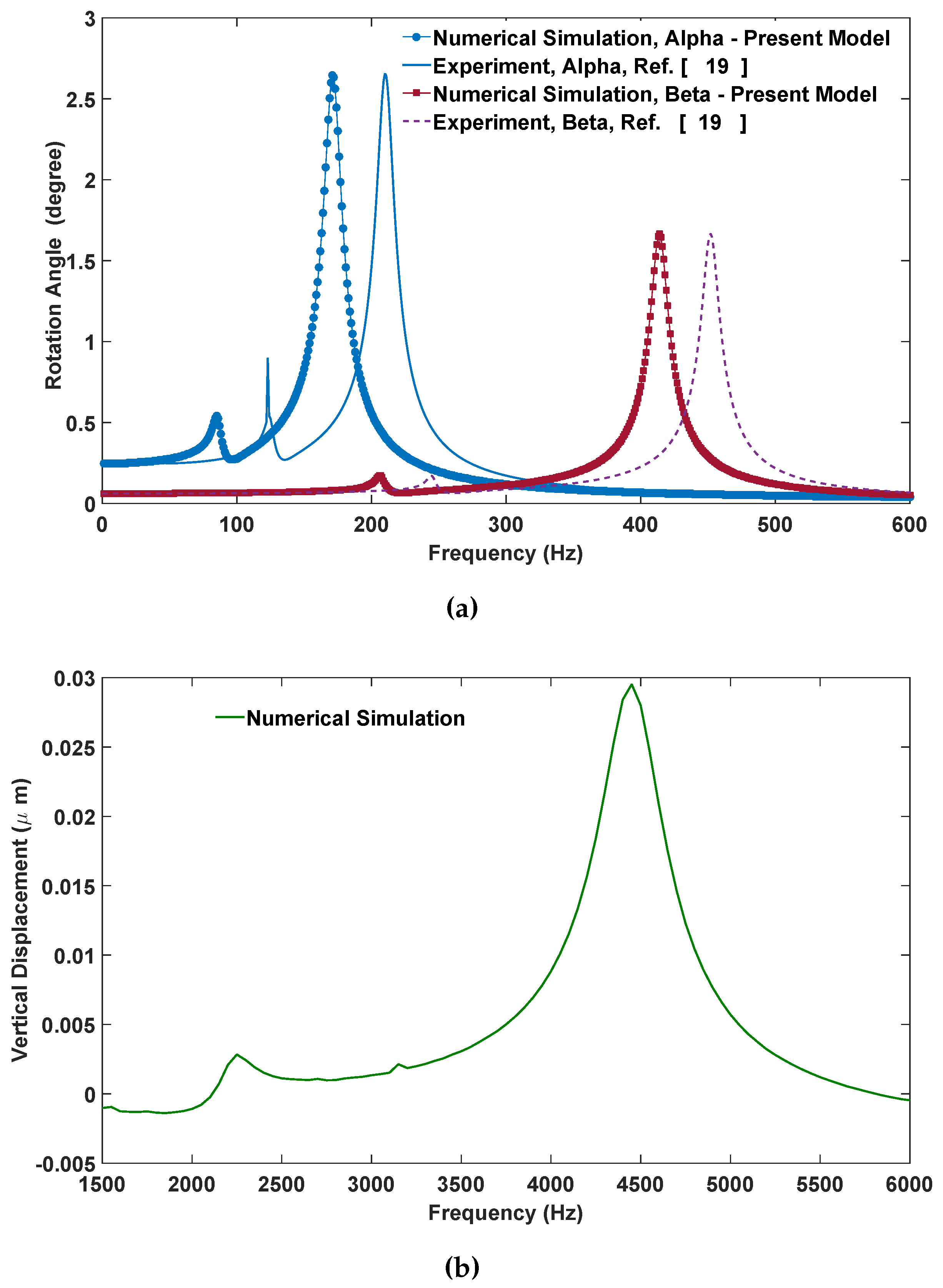 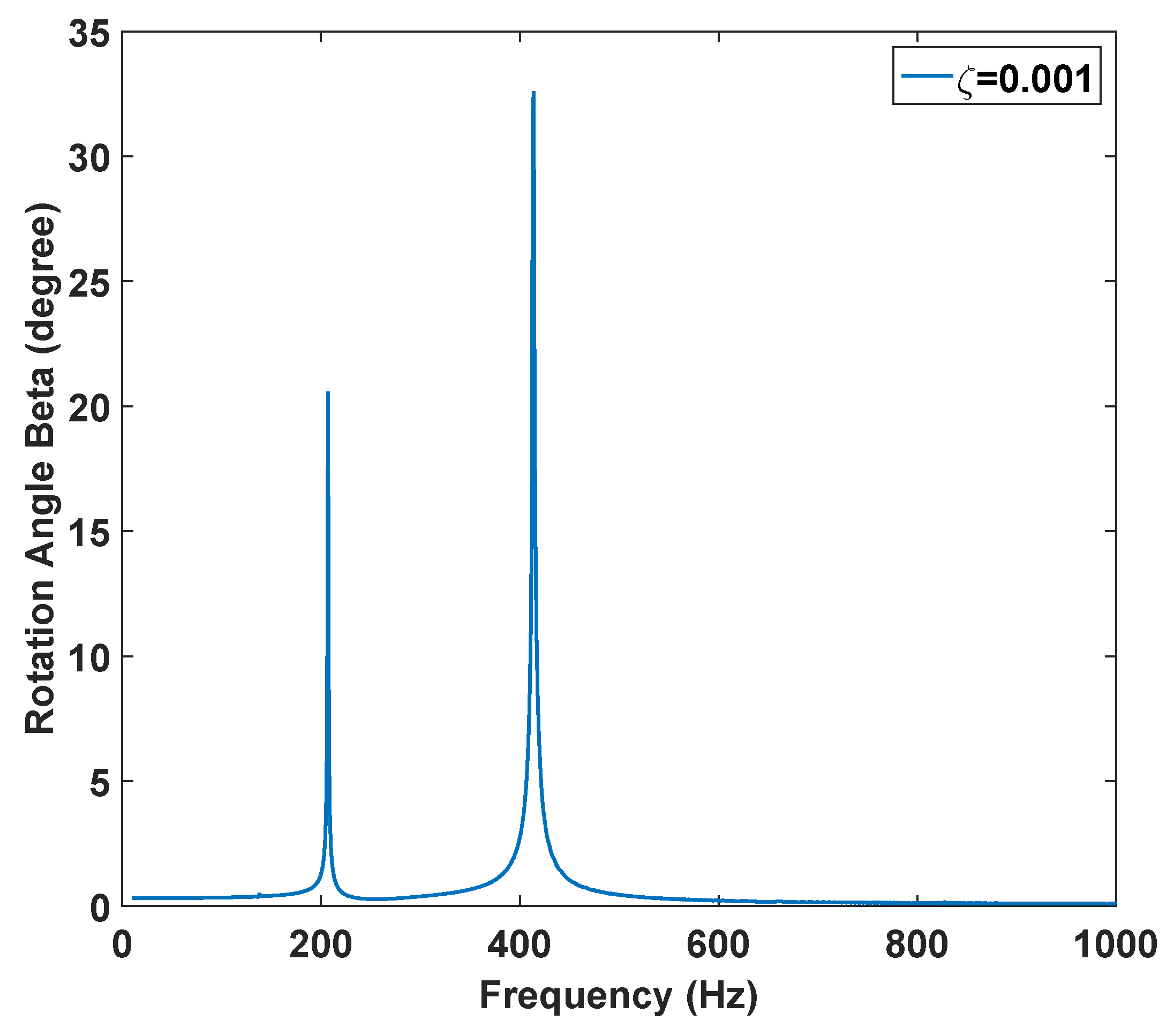 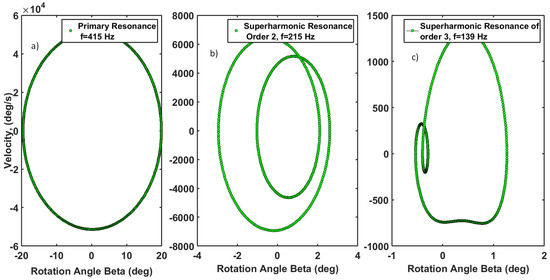