Advances in Nanofluidics
Next Article in Special Issue

Biosensing Near the Exceptional Point Based on Resonant Optical Tunneling Effect

:
Inspired by exceptional point (EP) sensing in non-Hermitian systems, in this work, a label-free biosensor for detecting low-concentration analytes is proposed, via a special multilayer structure: a resonant optical tunneling resonator. Due to the square root topology near the exceptional point, a recognized target analyte perturbs the system deviated from the exceptional point, leading to resolvable modes splitting in the transmission spectrum. The performance of the designed sensor is analyzed by the coupled-mode theory and transfer matrix method, separately. Here, the simulation results demonstrate that the obtained sensitivity is 17,120 nm/imaginary part unit of refractive index (IP) and the theoretical detection limit is 4.2 × 10−8 IP (regarding carcinoembryonic antigen (CEA), the minimum detection value is 1.78 ng). Instead of the typical diffusion manner, the liquid sample is loaded by convection, which can considerably improve the efficiency of sample capture and shorten the response time of the sensor. The sketched sensor may find potential application in the fields of biomedical detection, environment protection, and drinking water safety.
Keywords:
exceptional point; biosensing; resonant optical tunneling effect; carcinoembryonic antigen

In quantum mechanics, the exceptional point (EP) was first proposed in the perturbation of linear non-Hermitian operators [1], at which the eigenvalues and the corresponding eigenstates will be degenerated [2]. Due to gain and loss being easily integrated and adjusted in optical materials, EPs have been extensively realized in optics [3,4,5,6,7]. Several optical systems, such as microcavities [8], optical waveguide [9], and nonlinear photonic crystal [10] have been widely investigated to explore the characteristics of EPs, and series of the counterintuitive phenomena have been observed in these optical systems at EPs [11,12,13]. Among them, a striking feature of EPs is their unique response of degenerating eigenvalues to the weak perturbation. When the external perturbation is induced in the system, the formerly degenerated eigenvalues are split. For an Nth-order EP at which N eigenvalues coalesce [1], the modes splitting is proportional to the Nth root of perturbation, which is quite different from the classic linear response. Since Wiersig revealed the general principle of the ultra-low-resolution sensing based on such modes splitting and adopted this unique feature for the ultra-low-resolution sensing [14,15], the nanoparticle detection sensor was later verified in experiment [16]. Afterward, sensitivity has been enhanced 23 times at three-order EPs for thermal sensing [17].
As a special optical phenomenon, the resonant optical tunneling effect (ROTE) was discovered and later verified in experiments successively [18,19]. The ROTE resonators provide the benefits of low cost, effortless equipping, easy fabrication and integration. Several ROTE-based sensors, such as acceleration sensors [20] and refractive index (RI) sensors [21,22], have been theoretically or experimentally demonstrated. An EP biosensor was proposed and designed by a parity-time (PT) coupled symmetric ROTE resonator [23] for low-concentration carcinoembryonic antigen (CEA) detection. As one of the top 10 discoveries in physics [24], although PT symmetry is a special case of non-Hermitian systems used to study its characteristics, the operation of the sensor based on EPs in a PT symmetric system suffers from unstable mode detuning. General non-Hermitian systems have superiority in avoiding experimental complexity and instability [25], providing a new opportunity to explore the applications of EPs. Given the above research background, considering the complexity of balancing the gain and loss of two coupling cavities required by a PT symmetric system structure in experiments, a simply constructed structure with two directly coupled loss cavities was further theoretically studied. Not the PT symmetrical structure, but the more general non-Hermitian system was selected as the physical model for the sensor development.
In this study, a biosensor based on the mode splitting near the EP in the coupled ROTE resonators system was constructed for CEA detection. We designed a ROTE seven-layer structure, and its sensing principle was discussed here. The transmission spectra and the evolution of eigenvalues were simulated in a mathematical model. Finally, the performance of the designed sensor was theoretically evaluated, finding the sensitivity is up to 17,120 nm/IP. The designed biosensor has application potential in the fields of cancer diagnosis, drug screen, drinking water safety, and biomedical discoveries.

A schematic of the designed biosensor structure based on the coupled ROTE resonators is shown in Figure 1. The materials and parameters of the device are listed in Table 1. In experiments, the preparation processes of the designed device are as follows: Two silicate layers are used as the coupled cavities (the loss cavity L and the sensing cavity S). The polymer layers (low RI layers) are formed on the silicate glass wafer by spin coating as the tunneling layer of the ROTE structure. Then, the glass prism and the tunneling layer are assembled using ultraviolet curing adhesive, and two prisms are placed on the micro-positioners to approach each other. The behavior in the vicinity of the EP is controlled via adjusting the tiny separation between the two resonators (coupling strength K). The surface of the sensing cavity S is biofunctionalized in advance to bind specific target analytes, which are checked on the sensing surface perturbing the system from its EP, leading to modes splitting. Finally, the gap between two resonator units is sealed by the ultraviolet curing adhesive to form a closed sample-loading channel. Compared with the whispering-gallery-mode structure, the ROTE structure can be fabricated by a simple process and is easy to integrate. Additionally, the coupling layer can be used as a fluid channel in this special sensor structure, so that the samples are loaded by convection rather than diffusion, which can greatly improve the capture efficiency of analytes and shorten the response time of the sensor [26]. As diffusion relies only on the mass transfer of molecular motion, it expends on the detection time and thus reduces capture efficiency [27]. On the other hand, the convection is the mass transfer caused by fluid motion through the designed microchannel; and the analytes interact with the sensing surface almost instantaneously.
CEA was selected as the target analytes for our designed sensor. As a tumor marker, the concentration of CEA in tumor tissue is significantly higher than in normal tissue [28]. The detection of CEA concentration in exhaled breath condensate (EBC), as a noninvasive and simple detection method, can be used for the early diagnosis of lung cancer [29]. CEA manifests high specificity in patients with adenocarcinoma [30]. Generally, the concentration of CEA in EBC is about 2 ng/mL for healthy people and above 4 ng/mL for patients [31]. CEA can be specifically captured by the antigen-antibody reaction. Therefore, the surface of the sensing cavity S needs to be biofunctionalized to recognize CEA. This specific antigen and antibody recognition induces the absorption on the cavity S, which can be analyzed by the degree of splitting of the modes according to the evolution of the spectral line at the EP.

In this study, the EP was realized based on the coupled ROTE resonators system in simulation, near which the modes splitting response is proportional to the quasi-square root of the perturbation strength. By using this unique feature, a label-free biosensor was proposed to detect the concentration of CEA, and its sensing principle and performance were discussed theoretically. The simulation results demonstrate that the designed sensor has a theoretical detection limit of 4.2 × 10−8 IP, which corresponds to 1.78 ng of CEA. The sensitivity of the system can reach 17,120 nm/IP, which verifies that the sensor is able to detect the target compound in low concentrations. In addition to CEA detection, the designed sensor can find applications in the fields of environment protection, drinking water safety, and drug screening.

The authors declare that there are no conflicts of interest related to this work. 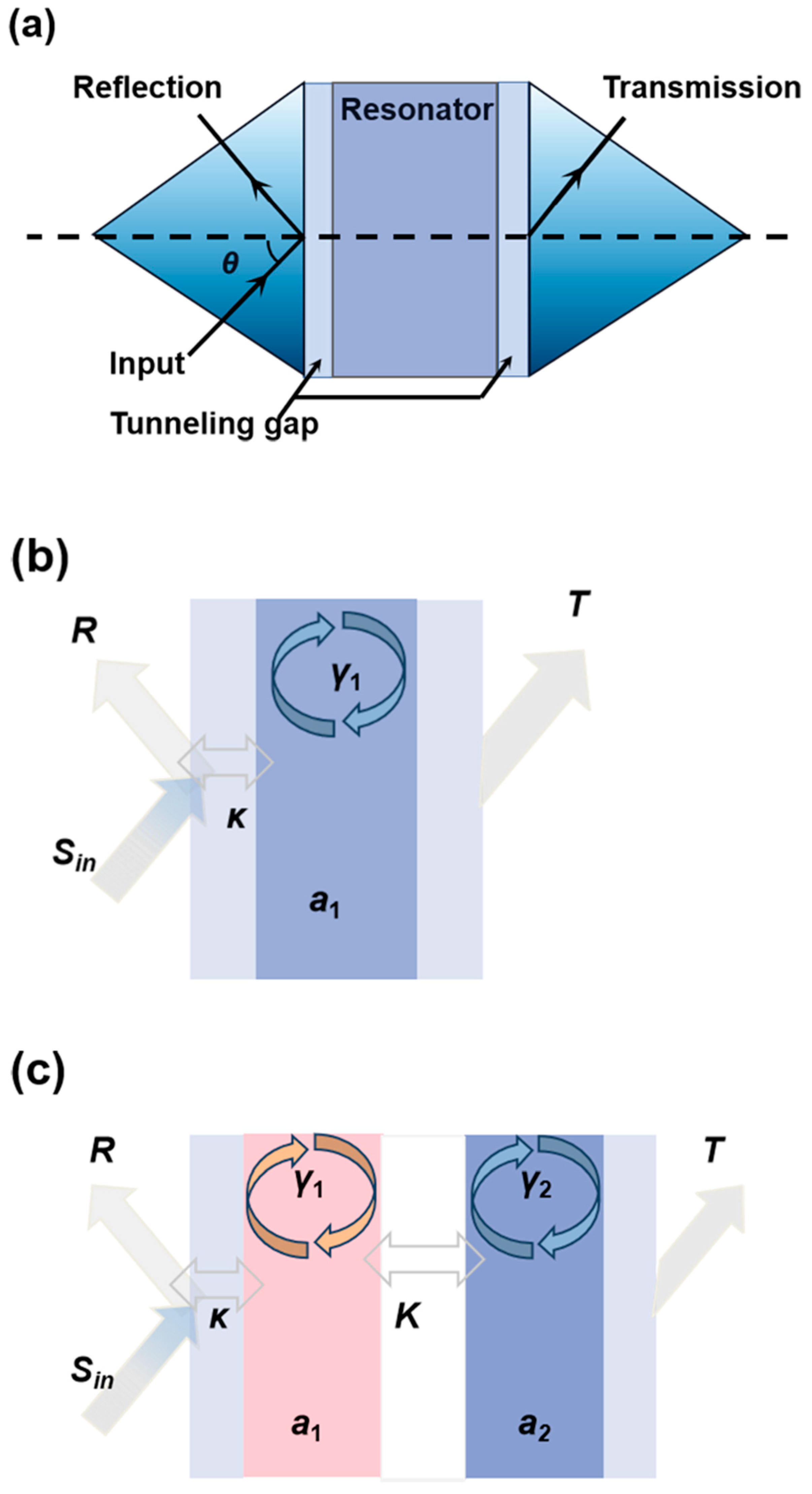 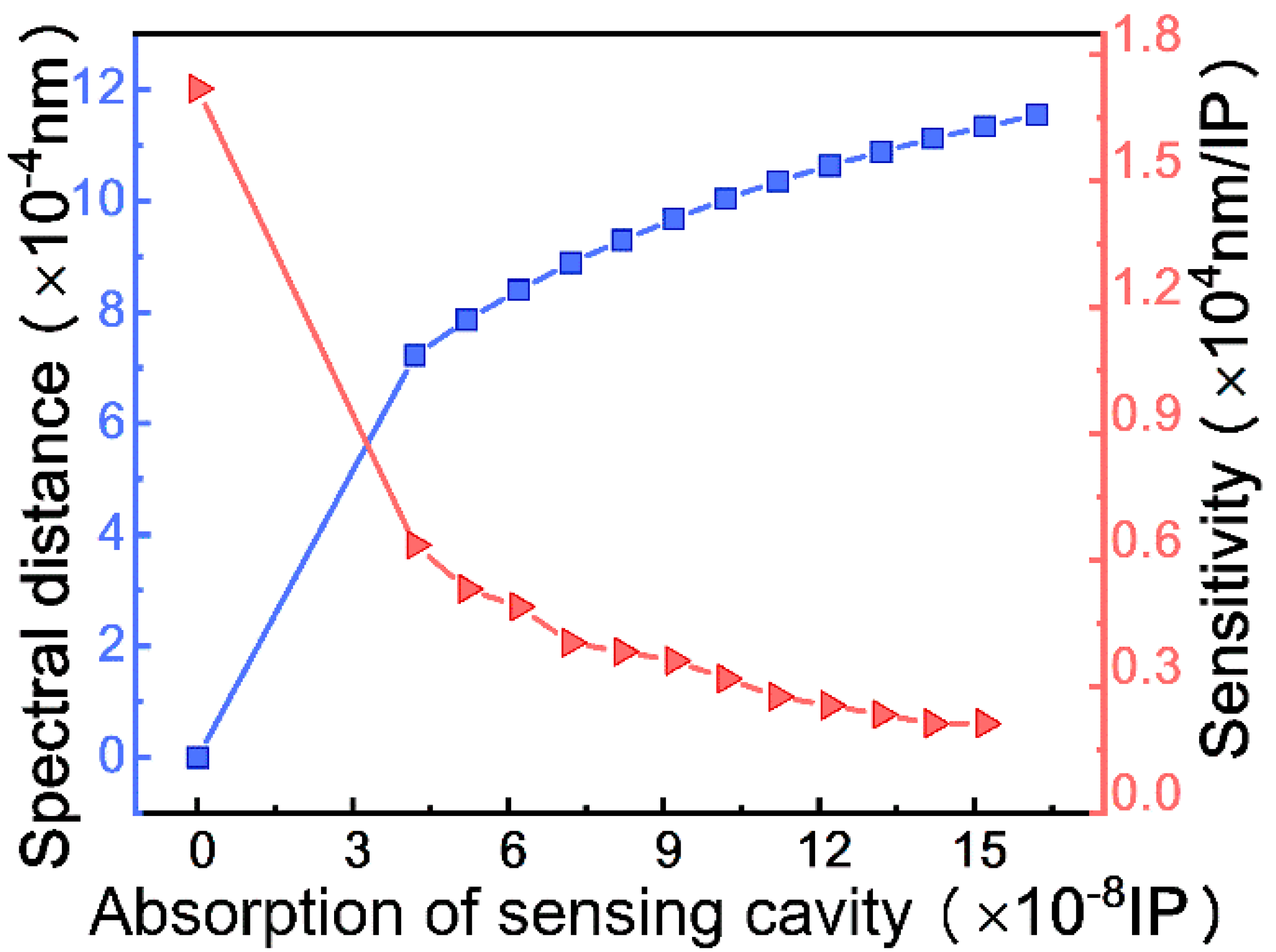