Directed Assembly of Particles for Additive Manufacturing of Particle-Polymer Composites

:
Poly(lactic acid) (PLA) is one of the most often used polymers in 3D printing based on the fused deposition modeling (FDM) method. On the other hand, PLA is also a shape memory polymer (SMP) with a relatively low glass transition temperature of ~60 °C, depending on the exact material composition. This enables, on the one hand, so-called 4D printing, i.e., printing flat objects which are deformed afterwards by heating them above the glass transition temperature, shaping them and cooling them down in the desired shape. On the other hand, objects from PLA which have been erroneously deformed, e.g., bumpers during an accident, can recover their original shape to a certain amount, depending on the applied temperature, the number of deformation cycles, and especially on the number of broken connections inside the object. Here, we report on an extension of a previous study, investigating optimized infill designs which avoid breaking in 3-point bending tests and thus allow for multiple repeated destruction and recovery cycles with only a small loss in maximum force at a certain deflection.
Keywords:
3D printing; poly(lactic acid) (PLA); fused deposition modeling (FDM); shape-memory polymer (SMP); 4D printing; infill patterns

Nowadays, 3D printing is used for many applications, from rapid prototyping to rapid tooling to rapid manufacturing [1]. Printing polymers is often performed by the fused deposition modeling (FDM) technology which enables creating 3D shapes from a broad variety of polymers [2,3]. One of the most often used polymers in FDM printing is poly(lactic acid), a biodegradable natural polymer without cell-toxic properties and thus also suitable for biotechnological and biomedical applications [4,5].
While 3D printing in general allows for creating nearly all shapes, in many cases this freedom of design is limited by technical problems, such as the requirements to have a suitable contact surface with the printing bed, to avoid too strong overhangs, etc. This is why in many cases it would be supportive to print a certain shape flat on the printing bed and afterwards deform it to reach the final shape. PLA indeed shows such shape-memory functionality [6,7,8]. It can thus be used to fit orthoses to an individual finger [9], but also for diverse biomedical applications, such as for minimally invasive surgeries [10,11,12,13]. 4D printing PLA is also used for design purposes and other applications [14,15,16,17].
In case of 4D printing, the required final shape is reached by heating the as-printed object to a temperature above the glass transition temperature, i.e., typically in the range of 60 °C to 100 °C in case of PLA [6,10,11], deforming the object at high temperature and fixing the desired shape during cooling it down back to room temperature. Another application of shape memory polymers, however, is related to accidental deformation, e.g., of bumpers, safety equipment for sports, etc. In this case, the deformation occurs at low temperatures where the mechanical impact may not only lead to reversible deformation, but also to broken bonds between 3D printed lines or within them.
In a previous study, we thus investigated diverse infill patterns, comparing some of the patterns available in slicing programs for FDM printers with self-designed infill patterns, mostly based on the idea of leaf spring structures [18]. Here, we show the results of a subsequent study, leading to more sophisticated structures which retain their shapes to a large amount even after 10 bending and recovery cycles.

The samples used in this study were printed using a MEGA-S FDM 3D printer (ANYCUBIC; Shenzhen Anycubic Technology Co., Ltd., Shenzhen, China). A nozzle diameter of 0.4 mm was used to set a layer thickness of 0.2 mm for the first layer and 0.12 mm for the other layers. The printing temperature was set to 200 °C and the heating bed temperature was set to 60 °C constantly.
The test specimens made of PLA (GIANTARM, Shenzhen, China; PLA filament 1.75 mm, silver; without additives to increase crystallinity) were constructed with the dimensions of 120 mm × 15 mm × 6 mm following polymer test specifications (ISO 20753:2018) and printed on the long side (on the rear of the CAD models shown in Table 1).
For the three-point bending test, the specimens were prepared with two completely filled plates on top and bottom, each 1 mm thick, to support the internal structure as a base support. No wall structures were implemented in order to more accurately test the behavior of the infill specimens. This basic structure was retained for all test specimens, only the infill structure was changed.
All specimens were designed and constructed in-house and always printed under the same circumstances, with a sample fill density of 100%, a print speed of 50%, and a high edge print positioning with a supporting brim with 6 line counts. To illustrate the material content, the mass of the test specimens was determined using a Xavax Jewel digital precision balance (Hama GmbH & Co KG, Monheim, Germany) and used as an indication and comparison value (Table 1).
In the first phase, certain basic patterns have been developed as filling structures for the specimen. The structures of the test specimen series “A” were created following an Octet grid matrix pattern [19]. A sample A-k with smaller repeat unit and a sample A-G with larger repeated unit were designed and printed, optimizing the structures presented in [18].
Test specimen “B” is an extension from the self-developed structure “LP100” from [18]. Here, waves and textile structures were combined for a new structural idea.
The infill pattern for test specimens “C” includes the structural fabric from dynamic lightweight design [20]. Auxetic structural behavior [21] is to be tested for shape memory effects in the test specimens C-k and compared with the other designs.
In the second phase, the filling patterns of the first phase have been changed or mixed. The AC-G test specimen was created as a mixture of A-G and C-k. The AC-H test specimen was designed from the A-G pattern, with the inclusion of reinforced structures due to increased fill pattern content. The specimen D-G is another new approach constructed from the test specimen series “A” and “C”.
Each sample was tested in triplicates regarding maximum deflection and with different amounts of specimens, as given in the Results section, for bending and recovery tests.
Bending and recovery tests were performed by a universal testing machine (Kern & Sohn, Balingen-Frommern, Germany). While each set of samples was first tested until break (or until the maximum deflection possible in the test setup) to find the point of maximum force, recovery tests were performed until the maximum force was reached, followed by recovery in a water bath of (60 ± 1) °C for 1 min, before it was cooled down in another water bath at room temperature for 2 min. This temperature is above the glass transition temperature of amorphous PLA used for 3D printing [22,23].
The main differences to the previous study [18] are as follows:

-
The inner walls are thinner, enabled by printing on a long thin plane (front or back in the sliced models in Table 1), thus reducing the specimen’s mass.
-
Channels along the whole specimen are not only produced along the shorter in-plane direction (from front to back in Table 1), but also along the longer in-plane direction (from left to right in Table 1).
-
Special lightweight designs are used (samples A and C), again reducing the specimen’s mass.
-
All samples are more lightweight than the best specimen of the previous study (sample LP100 in [18] had a mass of 9.8 g).

Different self-designed infill structures were used to prepare 3-point bending test samples from PLA by 3D printing via the FDM technique. Two of the samples designed as typical lightweight structures showed relatively constant forces for a broad range of deflection, making them suitable for safety applications. Bending and recovery tests revealed good recovery properties of these samples after heating the specimens to 60 °C, with one of the lightweight structures designed for the recent studies showing even lower residual strain despite significantly reduced mass. Next, the recovery process itself must be optimized in terms of temperature and duration, besides the choice of the ideal PLA material, combined with a final optimization of the specimen geometry, before tests with fast deformations will be performed, as they will typically occur during accidents.

The study was partly funded by the German Federal Ministry for Economic Affairs and Energy via the AiF, based on a resolution of the German Bundestag, grant number KK5129708TA1.

The data presented in this study are fully available in this article. 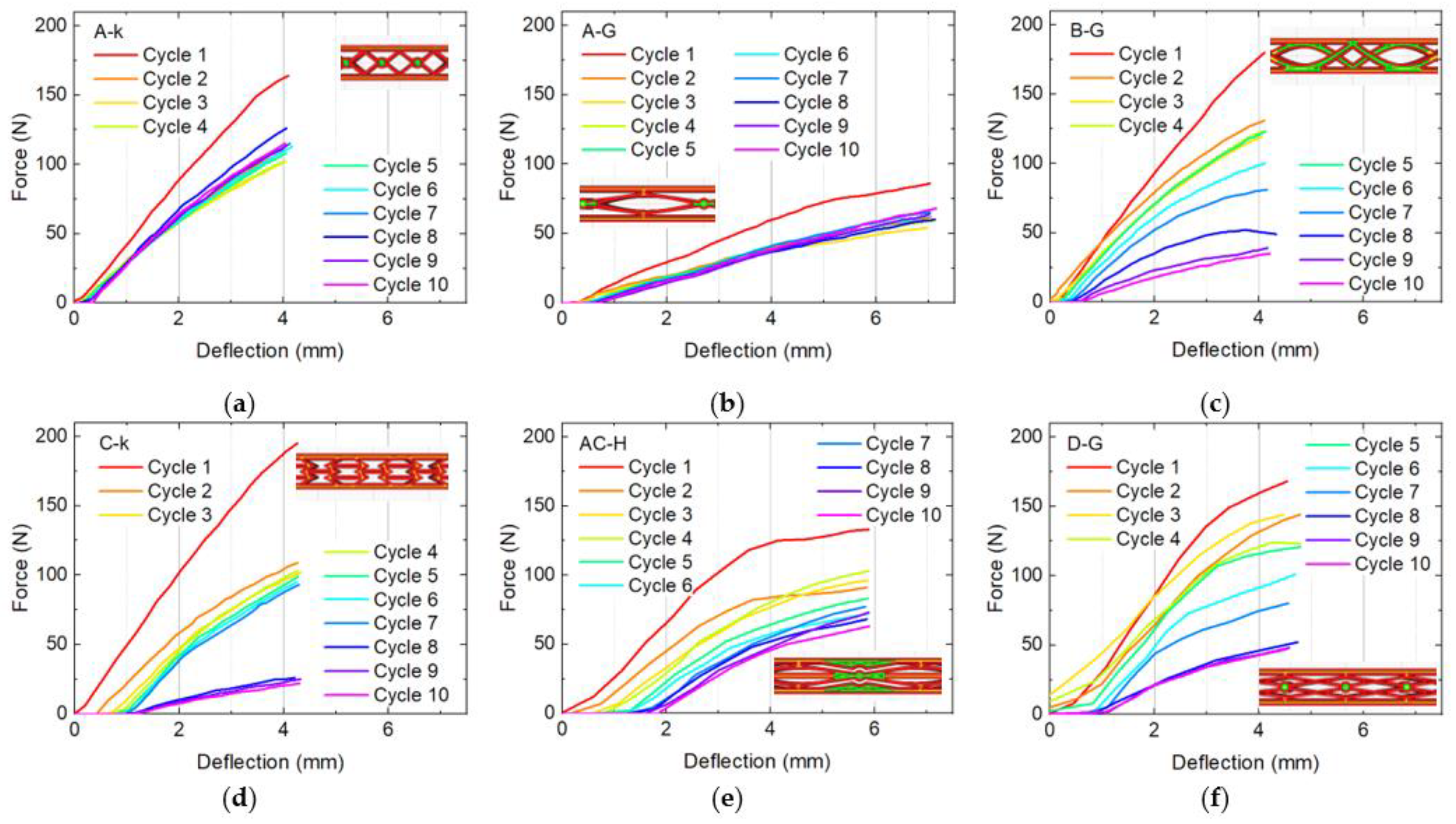 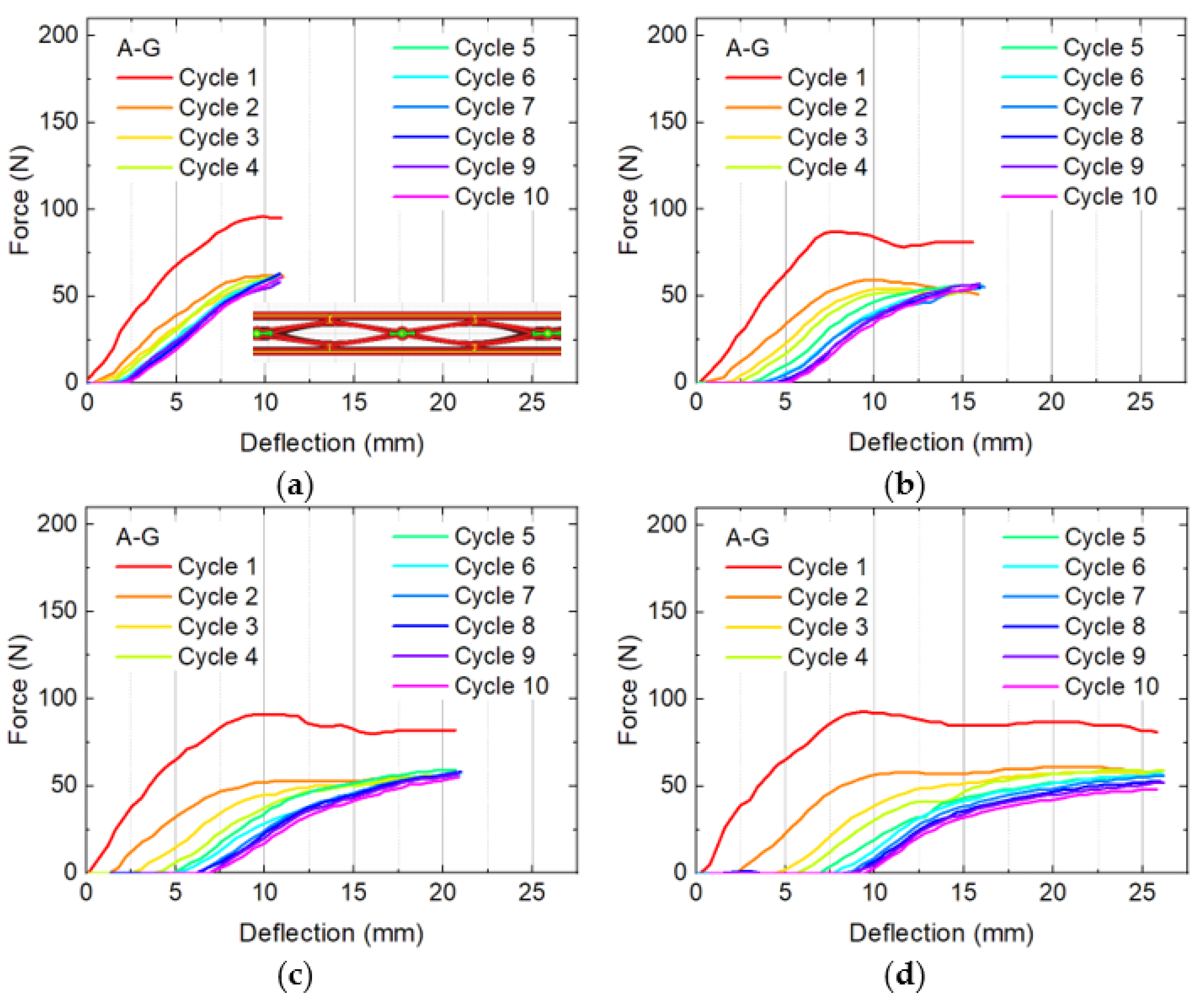 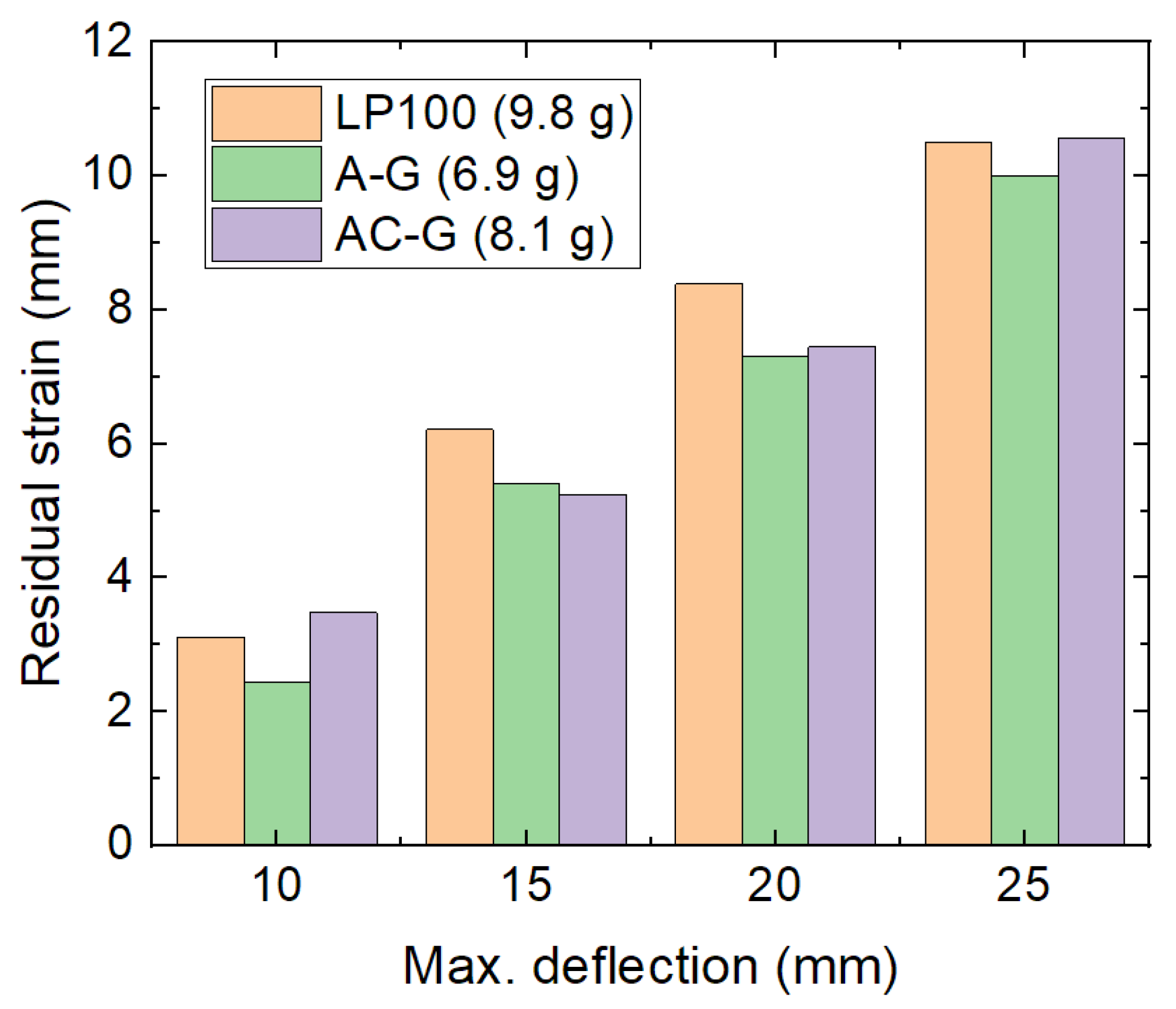