We evaluated the effect of electron beam (E-beam) sterilization (25 kGy, ISO 11137) on the degradation of β-tricalcium phosphate/polycaprolactone (β-TCP/PCL) composite filaments of various ratios (0:100, 20:80, 40:60, and 60:40 TCP:PCL by mass) in a rat subcutaneous model for 24 weeks. Volumes of the samples before implantation and after explantation were measured using micro-computed tomography (micro-CT). The filament volume changes before sacrifice were also measured using a live micro-CT. In our micro-CT analyses, there was no significant difference in volume change between the E-beam treated groups and non-E-beam treated groups of the same β-TCP to PCL ratios, except for the 0% β-TCP group. However, the average volume reduction differences between the E-beam and non-E-beam groups in the same-ratio samples were 0.76% (0% TCP), 3.30% (20% TCP), 4.65% (40% TCP), and 3.67% (60% TCP). The E-beam samples generally had more volume reduction in all experimental groups. Therefore, E-beam treatment may accelerate degradation. In our live micro-CT analyses, most volume reduction arose in the first four weeks after implantation and slowed between 4 and 20 weeks in all groups. E-beam groups showed greater volume reduction at every time point, which is consistent with the results by micro-CT analysis. Histology results suggest the biocompatibility of TCP/PCL composite filaments. View Full-Text
Keywords: 3D printing; β-tricalcium phosphate/polycaprolactone (β-TCP/PCL) composite; bone tissue engineering; electron beam sterilization 3D printing; β-tricalcium phosphate/polycaprolactone (β-TCP/PCL) composite; bone tissue engineering; electron beam sterilization
►▼ Show Figures 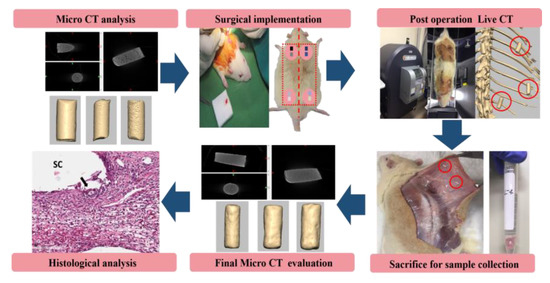