Enter the Dragon: The Dynamic and Multifunctional Evolution of Anguimorpha Lizard Venoms
Previous Article in Journal

Venom gland transcriptomes and proteomes of six Micrurus taxa (M. corallinus, M. lemniscatus carvalhoi, M. lemniscatus lemniscatus, M. paraensis, M. spixii spixii, and M. surinamensis) were investigated, providing the most comprehensive, quantitative data on Micrurus venom composition to date, and more than tripling the number of Micrurus venom protein sequences previously available. The six venomes differ dramatically. All are dominated by 2–6 toxin classes that account for 91–99% of the toxin transcripts. The M. s. spixii venome is compositionally the simplest. In it, three-finger toxins (3FTxs) and phospholipases A2 (PLA2s) comprise >99% of the toxin transcripts, which include only four additional toxin families at levels ≥0.1%. Micrurus l. lemniscatus venom is the most complex, with at least 17 toxin families. However, in each venome, multiple structural subclasses of 3FTXs and PLA2s are present. These almost certainly differ in pharmacology as well. All venoms also contain phospholipase B and vascular endothelial growth factors. Minor components (0.1–2.0%) are found in all venoms except that of M. s. spixii. Other toxin families are present in all six venoms at trace levels (<0.005%). Minor and trace venom components differ in each venom. Numerous novel toxin chemistries include 3FTxs with previously unknown 8- and 10-cysteine arrangements, resulting in new 3D structures and target specificities. 9-cysteine toxins raise the possibility of covalent, homodimeric 3FTxs or heterodimeric toxins with unknown pharmacologies. Probable muscarinic sequences may be reptile-specific homologs that promote hypotension via vascular mAChRs. The first complete sequences are presented for 3FTxs putatively responsible for liberating glutamate from rat brain synaptosomes. Micrurus C-type lectin-like proteins may have 6–9 cysteine residues and may be monomers, or homo- or heterodimers of unknown pharmacology. Novel KSPIs, 3× longer than any seen previously, appear to have arisen in three species by gene duplication and fusion. Four species have transcripts homologous to the nociceptive toxin, (MitTx) α-subunit, but all six species had homologs to the β-subunit. The first non-neurotoxic, non-catalytic elapid phospholipase A2s are reported. All are probably myonecrotic. Phylogenetic analysis indicates that the six taxa diverged 15–35 million years ago and that they split from their last common ancestor with Old World elapines nearly 55 million years ago. Given their early diversification, many cryptic micrurine taxa are anticipated. View Full-Text
Keywords: coralsnakes; Micrurus; venom gland transcriptomes; proteomes; 3FTx; phospholipase A2; molecular models; novel toxins coralsnakes; Micrurus; venom gland transcriptomes; proteomes; 3FTx; phospholipase A2; molecular models; novel toxins
►▼ Show Figures 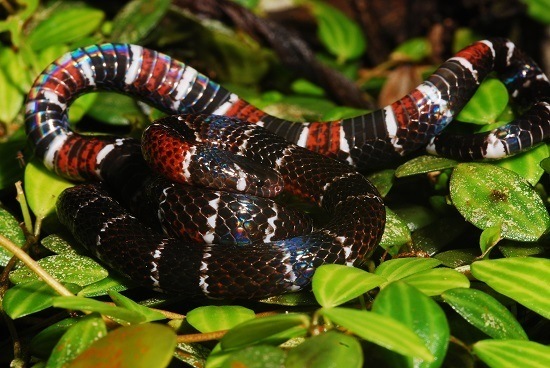