Ergot Alkaloids in Fattening Chickens (Broilers): Toxic Effects and Carry over Depending on Dietary Fat Proportion and Supplementation with Non-Starch-Polysaccharide (NSP) Hydrolyzing Enzymes

In this study, conducted for three years on eleven malting barley varieties cultivated in central Italy, the incidence of different mycotoxigenic fungal genera, the identification of the Fusarium species associated with the Fusarium Head Blight (FHB) complex, and kernels contamination with deoxynivalenol (DON) and T-2 mycotoxins were determined. The influence of climatic conditions on Fusarium infections and FHB complex composition was also investigated. Fusarium species were always present in the three years and the high average and maximum temperatures during anthesis mainly favored their occurrence. The FHB complex was subject to changes during the three years and the main causal agents were F. poae, F. avenaceum, F. tricinctum and F. graminearum, which, even if constantly present, never represented the principal FHB agent. The relative incidence of Fusarium species changed because of climatic conditions occurring during the seasons. The FHB complex was composed of many different Fusarium species and some of them were associated with a specific variety and/or with specific weather parameters, indicating that the interaction between a certain plant genotype and climatic conditions may influence the presence of Fusarium spp. causing infections. With regard to mycotoxin contamination, T-2 toxin, in some cases, was found in kernels at levels that exceeded EU recommended values. View Full-Text
Keywords: Fusarium; barley; mycotoxins; DON; T-2 toxin; FHB complex Fusarium; barley; mycotoxins; DON; T-2 toxin; FHB complex
►▼ Show Figures 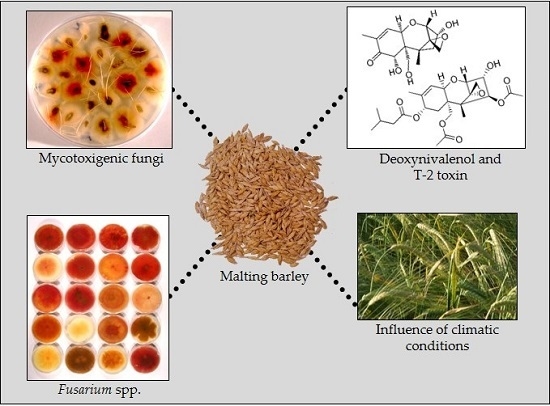