The enteric nervous system (ENS) can undergo adaptive and reparative changes in response to physiological and pathological stimuli. These manifest primarily as alterations in the levels of active substances expressed by the enteric neuron. While it is known that mycotoxins can affect the function of the central and peripheral nervous systems, knowledge about their influence on the ENS is limited. Therefore, the aim of the present study was to investigate the influence of low doses of zearalenone (ZEN) and T-2 toxin on calcitonin gene related peptide-like immunoreactive (CGRP-LI) neurons in the ENS of the porcine descending colon using a double immunofluorescence technique. Both mycotoxins led to an increase in the percentage of CGRP-LI neurons in all types of enteric plexuses and changed the degree of co-localization of CGRP with other neuronal active substances, such as substance P, galanin, nitric oxide synthase, and cocaine- and amphetamine-regulated transcript peptide. The obtained results demonstrate that even low doses of ZEN and T-2 can affect living organisms and cause changes in the neurochemical profile of enteric neurons.
Keywords: CGRP; zearalenone; T-2 toxin; ENS; descending colon; pig CGRP; zearalenone; T-2 toxin; ENS; descending colon; pig

Mycotoxins are secondary metabolites produced by some fungal species. These substances exert a deleterious impact on living organisms [1]. Their effects are carcinogenic, mutagenic, estrogenic and/or neurotoxic in nature, and can lead to an acute and chronic poisoning, allergies, as well as cause a damage to internal organs (primarily liver and kidneys). Given their effects and a high resistance to temperature [1,2], the presence of mycotoxins in food poses a potential threat to health and, in more extreme cases, life of both humans and animals.
To date approximately 400 fungal metabolites have been classified as mycotoxins. Zearalenone (ZEN) and T-2 toxin produced by the Fusarium spp. family, are of a particular clinical and economic significance due to their prevalence in food and the variety of toxic actions they may exert [2,3].
Zearalenone, also known as F2 mycotoxin, is mostly synthetized by Fusarium graminearum, culmorum, crookwellense, and roseum. It is found ubiquitously in food products, such as barley, oat, wheat, maize, peas, bananas, and bread. This mycotoxin acts by binding to estrogen receptors and affecting steroidogenic enzymes. Even at low doses, ZEN causes an estrogenic effect, resulting in changes in sex hormone cycles, hyperestrogenism, and sterility. Moreover, it can lead to developmental disorders, stunted growth, renal failure, and blood clots [4,5]. ZEN also harms the digestive system by causing cell proliferation and inflammation of the intestinal mucosal layer [5,6]. Previous studies have also shown the negative effects of ZEN on the nervous system, which are related to the presence of estrogen receptors in the brain and the fact that phytoestrogens are able to cross the blood-brain barrier [7,8].
T-2 toxin, which belongs to the trichothecenes family of toxins, is produced by Fusarium sporotrichioides, langsethiae, acuminatum, and poae [9]. Similarly to ZEN, it is prevalent in food products, especially in grains such as barley, oats, wheat, maize, rye, sorghum, and rice [10]. The effects exerted by this mycotoxin are mostly cytotoxic and immunosuppressive in nature [11]. T-2 toxin is responsible for a variety of conditions including alimentary toxic aleukia (ATA), inflammatory bowel disease, and disorders of the thymus and spleen [2]. It crosses the blood-brain barrier and, thus, it can also elicit changes in the central nervous system [12].
Given their properties, both ZEN and T-2 toxin may affect the gastrointestinal (GI) tract and the nervous system. On the other hand, it is well known that the enteric nervous system (ENS), located in the wall of the digestive tract, regulates all functions of the stomach and intestines and, together with the intestinal immune system, constitutes the first barrier against toxins found in ingested food. The structure of the ENS depends on animal species. In the porcine intestine the ENS is composed of three intramural ganglionated plexuses: the myenteric plexus (MP), located between the longitudinal and circular muscle layers; the outer submucous plexus (OSP), near the circular muscle layer; and, lastly, the inner submucous plexus (ISP), positioned between the muscularis mucosa and lamina propria [5,13].
The enteric plexuses consist of millions of neurons, which play different roles and express a range of neurotransmitters and/or neuromodulators [14]. One of the substances expressed by enteric nerve cells is calcitonin gene related peptide (CGRP), which to date has been found in the ENS and extrinsic innervation of the GI tract of several mammal species, including humans [15,16,17,18]. Within the intestine CGRP is regarded as the key neurotransmitter and/or neuromodulator of the ENS participating in sensory and nociceptive transmission and a marker of the intrinsic primary afferent neurons [19,20]. It is also known that this substance inhibits gastric acid secretion, increases mesenteric blood flow, protects intestinal mucosa and, possibly, exerts relaxatory effects on the gastrointestinal muscle layer [21,22,23]. Moreover, some studies show that CGRP is involved in the regeneration of nervous tissue after injury [24].
Despite the considerable amount of information available on the impact of ZEN and T-2 toxin on living organisms [9], many aspects of their activity remain unknown. One of them is the influence of low doses of these toxins on the ENS. Admittedly, whilst the neurotoxic activity of ZEN and T-2 toxin is not considered to be the most critical effect of these substances, previous studies described the negative impact of them on neuronal cells [7,25]. Moreover both ZEN and T-2 may act on the intestine by different mechanisms which, first of all, include estrogenic activity (in the case of ZEN) and immunological and/or hematological effects (in the case of T-2 toxin) [9,10,26]. These mechanisms of action may in turn impact the ENS [27]. The knowledge connected with the influence of low doses of mycotoxins on enteric neurons is fragmentary and incomplete [5,6,13], although it is known that the ENS is able to undergo structural, functional or chemical changes as a result of adaptive or reparative processes in response to various pathological and toxicological agents [13,28]. The impact of ZEN and T-2 toxin on CGRP distribution in the ENS has not been studied at all, even though this peptide seems to be an important neuronal factor involved in regulatory processes linked to estrogenic and/or immunological activity [29,30].
Therefore, the aim of the present study was to investigate the changes in CGRP-positive nervous structures of the ENS in the porcine colon after the administration of low doses of ZEN and T-2 toxin. Due to the significant sensitivity of the ENS to the presence of harmful agents in the GI tract [28] and the variety of functions that CGRP exerts on the intestinal regulatory processes [20,21,22], these changes may represent the first subclinical symptoms of the damage caused by the mycotoxins studied. The obtained results will enable the development of knowledge about the actions of low doses of ZEN and T-2 toxin on living organisms this study is of particular interest, given that the pig is considered to be an excellent animal model of human physiology [31].

During the present investigation, CGRP-LI nervous structures in the porcine descending colon were observed under physiological conditions, as well as after the administration of zearalenone and T-2 toxin (Table 1).
In physiological conditions (control group) a relatively high percentage of CGRP-LI neurons was observed in all types of enteric plexuses (Figure 1). The greatest number of these neurons was noted in the ISP, where CGRP-positive perikarya amounted to 40.06% ± 1.94% of all cells immunoreactive to protein gene product 9.5 (PGP 9.5), which was used as a panneronal marker. In the MP and OSP these values came out 26.79% ± 1.26% and 38.57% ± 4.12%, respectively.
Overall, both mycotoxins studied caused an increase in the percentage of CGRP-LI neurons present in all types of enteric plexuses (Table 1). However, the changes were more pronounced after ZEN administration (Figure 1). The highest increase in the percentage of CGRP-positive neurons, relative to control animals, was observed in the MP and the ISP of ZEN group (Table 1), where these values amounted to 45.95% ± 3.41% and 59.39% ± 1.64%, respectively. (The increase of about 20 percentage points, pp). The only plexus in which the proportion of the CGRP-positive enteric neurons was not increased in the presence of a mycotoxin was the OSP in animals dosed with T-2 toxin. The changes observed in this condition were not statistically significant (compared to the values observed in control pigs).
Contrary to neuronal cells, changes in the density of colonic CGRP-positive nerve fibers caused by both mycotoxins studied were less pronounced. These fibers were relatively thin and rare (Figure 1) both in the control and experimental groups. The increase in the density of mucosal nerves immunoreactive to CGRP was noted after ZEN and T-2 administration, nerve fibers were located in the muscular layer, where observed changes were not statistically significant (Table 1). In the case of intraganglionic CGRP-LI nerve fibers, the mycotoxin-induced fluctuations were also sparsely visible (Table 1) and limited to the MP (in T-2 and ZEN groups) and the OSP (in the ZEN group only).

2.2. Co-Localization of CGRP with Other Neuronal Active Substances

This study was a part of a research project No. NN 308 237936 financed by the National Science Centre in Poland and KNOW (Leading National Research Centre) Scientific Consortium “Healthy Animal—Safe Food”, decision of Ministry of Science and Higher Education No. 05-1/KNOW2/2015. 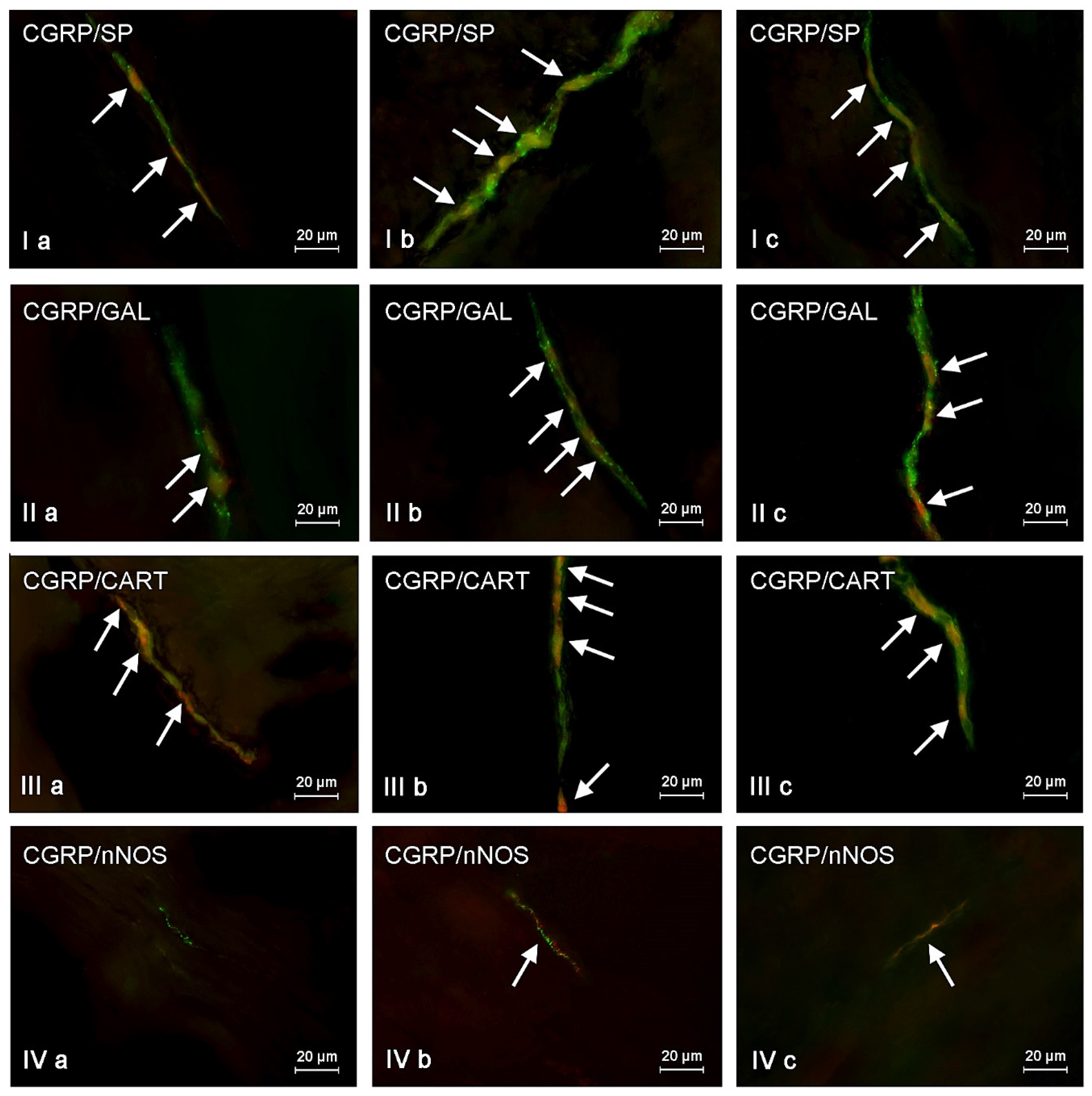 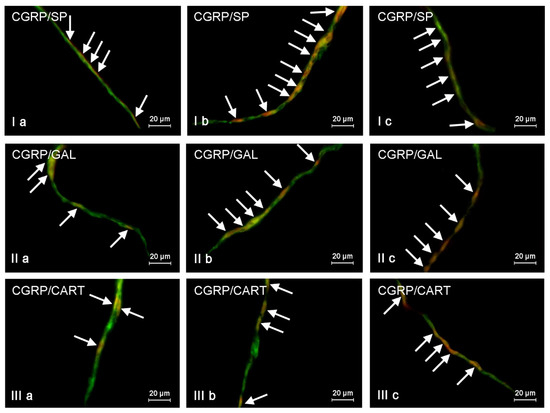 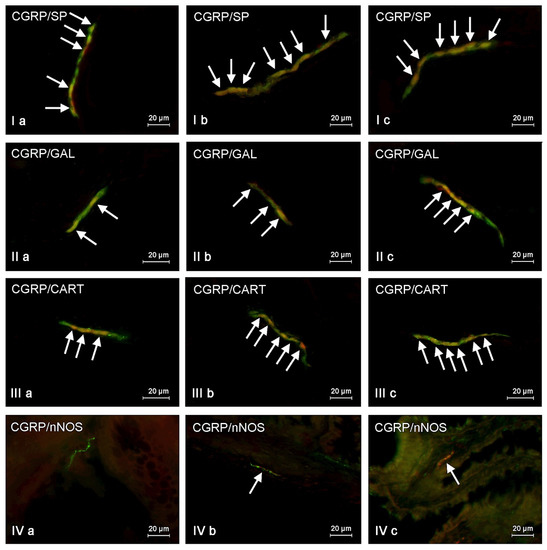 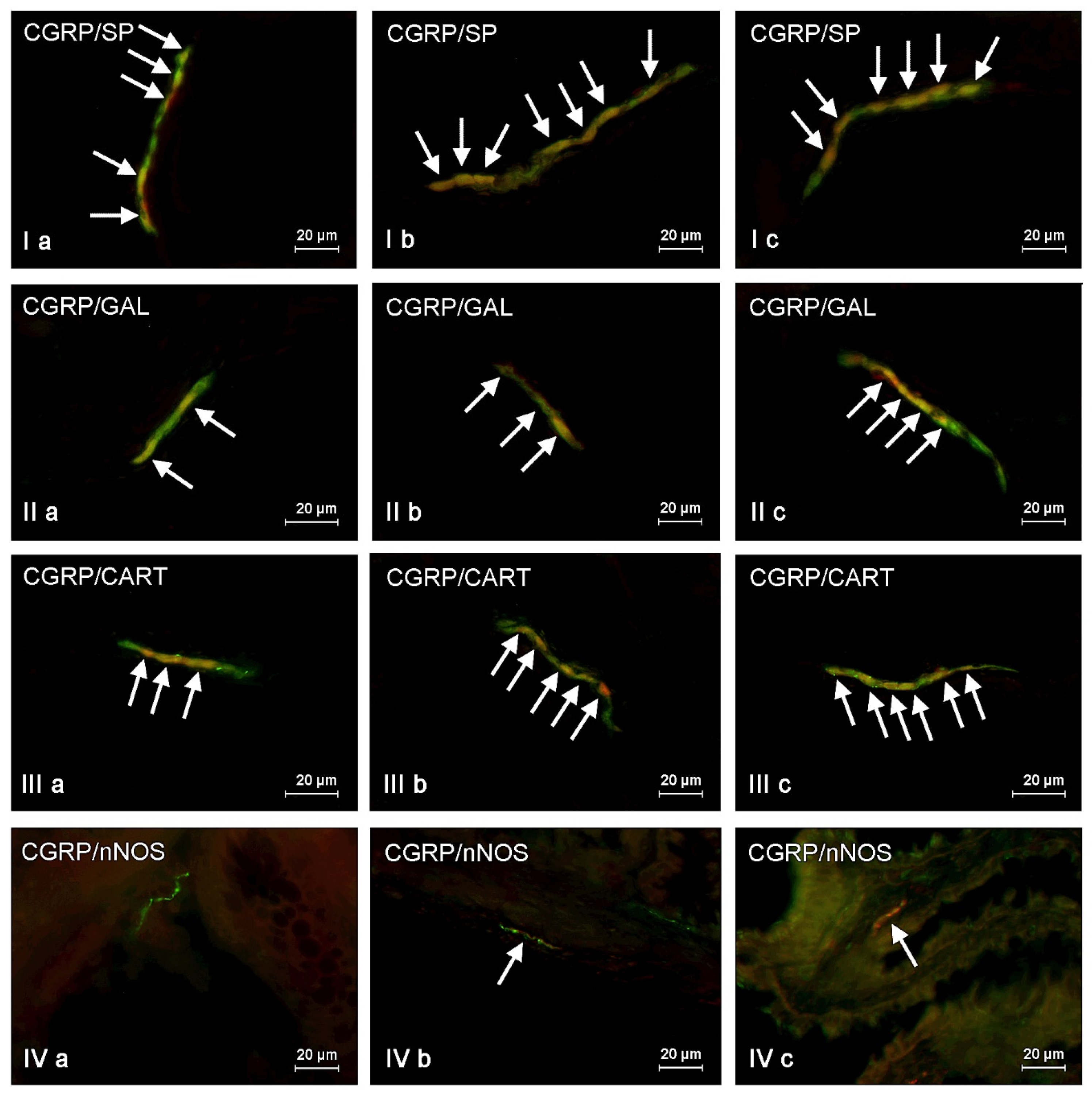 Table 1. CGRP-LI perikarya and nerve fibers in the porcine descending colon.
(1) Average number of CGRP-LI nerve fibers per area studied (mean ± SEM); (2) the percentage of CGRP-LI neurons (mean ± SEM) in relation to neurons stained for PGP 9.5 (used as pan neuronal marker); (3) the density of intraganglionic CGRP-LI nerve fibers presented in arbitrary units on the scale from (−), indicating the absence of CGRP-LI nerves, to (++++), depicting a very dense meshwork of fibers studied. Statistically significant differences (p ≤ 0.05) between control group and T2 group, as well as between the control group and the ZEN group, are marked with *.

Table 7. List of antisera and reagents used in immunohistochemical investigations.