Cnidarian constitutes a great source of bioactive compounds. However, research involving peptides from organisms belonging to the order Zoanthidea has received very little attention, contrasting to the numerous studies of the order Actiniaria, from which hundreds of toxic peptides and proteins have been reported. In this work, we performed a mass spectrometry analysis of a low molecular weight (LMW) fraction previously reported as lethal to mice. The low molecular weight (LMW) fraction was obtained by gel filtration of a Zoanthus sociatus (order Zoanthidea) crude extract with a Sephadex G‐50, and then analyzed by matrix‐assisted laser desorption/ionization time‐of‐flight/time‐of‐flight (MALDI‐TOF/TOF) mass spectrometry (MS) in positive ion reflector mode from m/z 700 to m/z 4000. Afterwards, some of the most intense and representative MS ions were fragmented by MS/MS with no significant results obtained by Protein Pilot protein identification software and the Mascot algorithm search. However, microcystin masses were detected by mass‐matching against libraries of non‐ribosomal peptide database (NORINE). Subsequent reversed‐phase C18 HPLC (in isocratic elution mode) and mass spectrometry analyses corroborated the presence of the cyanotoxin Microcystin‐LR (MC‐LR). To the best of our knowledge, this finding constitutes the first report of MC‐LR in Z. sociatus, and one of the few evidences of such cyanotoxin in cnidarians. View Full-Text
Keywords: microcystins;  MC‐LR;  Zoanthus  sociatus;  zoanthidea;  cnidarian;  Sephadex  G50;   MALDI‐TOF/TOF microcystins;  MC‐LR;  Zoanthus  sociatus;  zoanthidea;  cnidarian;  Sephadex  G50;   MALDI‐TOF/TOF
►▼ Show Figures 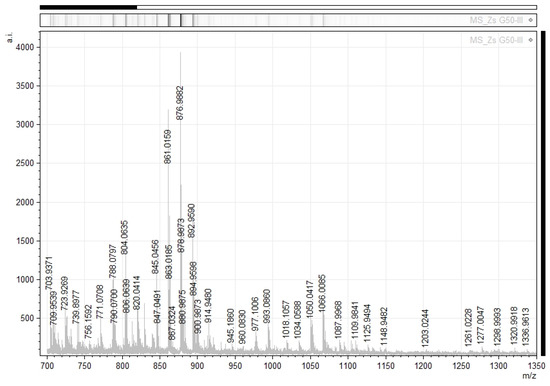