An understanding of the molecular mechanisms by which microbial, plant or animal-secreted toxins exert their action provides the most important element for assessment of human health risks and opens new insights into therapies addressing a plethora of pathologies, ranging from neurological disorders to cancer, using toxinomimetic agents. Recently, molecular and cellular biology dissecting tools have provided a wealth of information on the action of these diverse toxins, yet, an integrated framework to explain their selective toxicity is still lacking. In this review, specific examples of different toxins are emphasized to illustrate the fundamental mechanisms of toxicity at different biochemical, molecular and cellular- levels with particular consideration for the nervous system. The target of primary action has been highlighted and operationally classified into 13 sub-categories. Selected examples of toxins were assigned to each target category, denominated as portal, and the modulation of the different portal’s signaling was featured. The first portal encompasses the plasma membrane lipid domains, which give rise to pores when challenged for example with pardaxin, a fish toxin, or is subject to degradation when enzymes of lipid metabolism such as phospholipases A2 (PLA2) or phospholipase C (PLC) act upon it. Several major portals consist of ion channels, pumps, transporters and ligand gated ionotropic receptors which many toxins act on, disturbing the intracellular ion homeostasis. Another group of portals consists of G-protein-coupled and tyrosine kinase receptors that, upon interaction with discrete toxins, alter second messengers towards pathological levels. Lastly, subcellular organelles such as mitochondria, nucleus, protein- and RNA-synthesis machineries, cytoskeletal networks and exocytic vesicles are also portals targeted and deregulated by other diverse group of toxins. A fundamental concept can be drawn from these seemingly different toxins with respect to the site of action and the secondary messengers and signaling cascades they trigger in the host. While the interaction with the initial portal is largely determined by the chemical nature of the toxin, once inside the cell, several ubiquitous second messengers and protein kinases/ phosphatases pathways are impaired, to attain toxicity. Therefore, toxins represent one of the most promising natural molecules for developing novel therapeutics that selectively target the major cellular portals involved in human physiology and diseases. View Full-Text
Keywords: ion channels; lethal dose; neurotoxicity; phospholipids; plasma membrane; protein kinases; receptors; second messengers; signal transduction portals; toxins ion channels; lethal dose; neurotoxicity; phospholipids; plasma membrane; protein kinases; receptors; second messengers; signal transduction portals; toxins
►▼ Show Figures 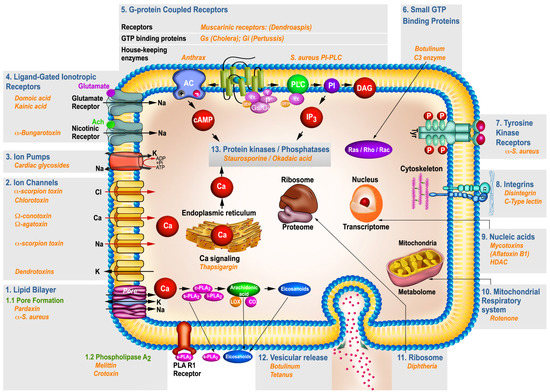