Sharks have greater risk for bioaccumulation of marine toxins and mercury (Hg), because they are long-lived predators. Shark fins and cartilage also contain β-N-methylamino-l-alanine (BMAA), a ubiquitous cyanobacterial toxin linked to neurodegenerative diseases. Today, a significant number of shark species have found their way onto the International Union for Conservation of Nature (IUCN) Red List of Threatened Species. Many species of large sharks are threatened with extinction due in part to the growing high demand for shark fin soup and, to a lesser extent, for shark meat and cartilage products. Recent studies suggest that the consumption of shark parts may be a route to human exposure of marine toxins. Here, we investigated BMAA and Hg concentrations in fins and muscles sampled in ten species of sharks from the South Atlantic and Pacific Oceans. BMAA was detected in all shark species with only seven of the 55 samples analyzed testing below the limit of detection of the assay. Hg concentrations measured in fins and muscle samples from the 10 species ranged from 0.05 to 13.23 ng/mg. These analytical test results suggest restricting human consumption of shark meat and fins due to the high frequency and co-occurrence of two synergistic environmental neurotoxic compounds.
Keywords: β-N-methylamino-l-alanine; conservation; cyanobacteria; total mercury; methylmercury; neurodegenerative disease; neurotoxin; sharks β-N-methylamino-l-alanine; conservation; cyanobacteria; total mercury; methylmercury; neurodegenerative disease; neurotoxin; sharks

Sharks are exploited in both target fisheries [1,2,3] and as bycatch (both discarded and incidental catch) that is also sold [4,5,6]. The estimates suggest total annual mortality of 100 million sharks killed in 2000 and about 97 million sharks in 2010, with a total range between 63 and 273 million per year [7]. At least 126 countries worldwide catch sharks, and the global annual value of trade in shark parts is approximately $1 billion US. [8]. Though sharks are harvested for meat consumption and/or for their cartilage used in alternative medicine products, the largest driver of shark mortality is directed fishing to obtain their fins for human consumption in shark fin soup [9,10,11,12]. Given their relatively low natural population growth rates, many sharks are undergoing population declines [5,7] rendering about 16% of the ocean’s shark species threatened with extinction [13].
Shark fin soup primarily consumed in China is also a delicacy in other Asian countries and their diaspora communities worldwide [11,12]. Records from the Chinese Song Dynasty (960–1279) describe the use of shark fin soup as a traditional banquet staple [14]. Today, shark fin soup is in increasingly high demand, popular at weddings and other celebrations across Asia [15]. Dietary supplements containing shark cartilage, the health benefits of which are purportedly bolstered by traditional Chinese medicine claims, have gained popularity in western nations. However, the U.S. Food and Drug Administration (FDA) has been unable to confirm any proclaimed benefits [16] and available reports of health benefits are questionable [17].
There is growing concern as to the potential negative health consequences associated with consuming shark parts, including fins, meat and cartilage. The neurotoxic compound methyl Hg (MeHg) has been known to bioaccumulate in sharks over their lifespans [18,19,20,21]. As such, Hg levels in shark muscle often exceed advisory guidelines for safe human consumption [21,22,23,24]. For example, the Florida Department of Health (FDOH) advises that people should not eat sharks greater than ~109 cm and further recommends that children and pregnant woman not eat any shark meat [23]. Moreover, recent studies have reported that commercial shark cartilage supplements contain pro-inflammatory compounds that could pose health risks for consumers, especially those with inflammatory diseases [17].
Recently, the cyanobacterial neurotoxin β-N-methylamino-l-alanine (BMAA), has been detected in shark fins [25] and shark cartilage supplements [16]. BMAA has been linked to amyotrophic lateral sclerosis/Parkinsonism dementia complex (ALS/PDC) of Guam and has been detected in the brains of North American Alzheimer’s disease and ALS patients [26,27], suggesting that BMAA plays a role as an environmental toxin in neurodegenerative disease. Recent evidence suggests that merely living near a body of water with cyanobacterial blooms, which contaminate the water, fish, and even the air, may increase the risk of developing ALS [28]. In vitro exposures have demonstrated BMAA’s acute neurotoxicity and animal studies show that BMAA exposure leads to motor impairments in rats [29,30]. Thus, the consumption of shark fins and dietary cartilage supplements may pose a risk for human exposure to environmental neurotoxins BMAA and Hg [16,25].
A causal role for BMAA toxicity in humans is still uncertain due to a lack of epidemiological data with human intake estimated from dietary exposures. Thus, it remains unclear whether detection of BMAA in shark fin or cartilage supplements on its own poses a threat to human health. Likewise, it has been noted that the concentrations of MeHg found in fish and marine products are unlikely to cause significant adverse CNS health effects [31]. However, a synergistic toxicity between these two neurotoxic compounds has been suggested, since BMAA concentrations in a range of 10–100 μM were potentiated by MeHg (3 μM) when these were combined. BMAA and MeHg have been shown to decrease the main cellular antioxidant glutationine, which would increase vulnerability of the brain to oxidative stress [31]. Recent studies by Cox and coworkers demonstrate that vervet monkeys fed BMAA for 140 days develop neurofibrillary tangles and β-amyloid deposits in the brain similar to what is seen in patients with neurodegenerative diseases, including ALS and Alzheimer’s disease [32].
Given the potential synergistic toxicity of Hg and BMAA and their likely prevalence in top marine predators, we conducted an expanded analysis to test fin and muscle from an opportunistic sample of 10 different shark species collected from different ocean basins. Shark samples were analyzed for BMAA using high performance liquid chromatography with fluorescence detection (HPLC-FD) and Hg concentrations were quantified by cold vapor atomic fluorescence spectrometry (CVAFS). Since the total Hg (THg) that is measured in shark muscle and fin is mostly in the form of MeHg+, measures of total Hg are generally equivalent to MeHg+ [33,34,35] Here, THg concentrations in fin and muscle samples were measured and compared to MeHg+ for confirmation of levels in select samples. Our results demonstrated that all 10 shark species tested positive for both BMAA and Hg. Independent laboratory confirmation of BMAA and its isomers 2, 4-diaminobutyric acid (DAB) and N-(2-aminoethyl) glycine (AEG) was determined by ultra-performance liquid chromatography/mass spectrometry/mass spectrometry (UPLC-MS/MS).

BMAA in shark fin clips was detected and quantified using high performance liquid chromatography (HPLC) methods as reported previously [25]. Briefly, fin clips (50 mg) were hydrolyzed at 110 °C for 18 h in 6 N HCl (1:8 w/v) followed by filtration using centrifugation at 15,800× g for 3 min. Sample extracts were concentrated and dried in a speed-vac (Thermo-Savant SC250DDA Speed Vac Plus with a Savant refrigerator trap RVT 4104, ThermoFischer; Waltham, MA, USA). Extracts were re-suspended in 0.1 M trichloroacetic acid and washed with chloroform to remove any residual lipids. The dried extract was resuspended to 1000 µL in 20 mM HCl. A 100 µL aliquot of the sample extract was derivatized with 6-aminoquinolyl-N-hydroxysuccinimidyl carbamate (AQC) using the AccQ-Fluor reagent (Waters Crop; Milford, MA, USA). The derivatized samples (20 µL resuspended HCl extract, 60 µL of borate buffer (AccQ-Fluor Reagents A and B; Waters), and 20 µL AccQ-Tag) were run in parallel with buffer and AQC blanks and BMAA, AEG, DAB and reference amino acid standards. The sample matrix was spiked with known amounts of BMAA to determine recovery of the extraction procedure and confirm peak identity. Each sample was prepared in triplicate for quantitative studies and orthogonal detection method comparisons. For the orthogonal method comparisons, the shark samples were prepared by different analysts in different labs as a measure of method ruggedness.

Total Hg (THg) includes inorganic and organic forms of Hg. THg and MeHg analyses were performed on shark fin clips following the Standard Operating Procedure modified from the U.S. Environmental Protection Agency (EPA) Test Method 1631 [61]. THg in a sample was isolated and oxidized to mercuric ion using acid digestion, and then reduced to elemental Hg by stannous chloride, purged from the liquid by a carrier gas (Argon). MeHg was extracted from the sample matrix with sodium hydroxide in methanol on a hot block. The Hg species on the traps were desorbed, pyrolyzed and detected by Cold Vapor Atomic Fluorescence Spectrometry (CVAFS) (Millennium Merlin 10.035, PS Analytical, Deerfield Beach, FL, USA). Briefly, the samples (about 0.2 g) were weighed into 10-mL glass ampoules to which 1 mL of deionized water and 2 mL of concentrated HNO3 were added. The ampules were then sealed and the samples were autoclaved for 1 h at 105 °C for sample digestion. The samples were diluted with 1% HCl and introduced into CVAFS, reduced with 2% (v/v) SnCl2 (in 2.5% HCl). Daily analytical runs began with an initial calibration containing 5 non-zero points and a system blank. The mean calibration factor (CFm), calculated from the calibration factor (CFx) for Hg in each of the five standards using the system blank-subtracted peak height, was used for the calculation of sample concentration. Each analytical batch included at least one method blank, a Continuing Calibration Check Samples (CCS), and a Quality Control Sample (QCS). All method blanks during analysis were below the method detection limits (MDLs). The readings of CCS were always within acceptable range (85%–115% for THg of initial calibration). Certified reference material (CRM), DORM-2, was used as a QCS sample throughout the analysis and the recoveries for the QCS samples (84%–128% for THg) were always within acceptable range specified in standard operating procedure (SOPs) (70%–130% for THg). The method limit of detection for the instrument was 0.002 mg/kg.

The following is available online at www.mdpi.com/2072-6651/8/8/238/s1. Table S1 BMAA and Total Hg concentrations determined by HPLC in sharks. Table S2: BMAA and Mercury concentration detected by seasons in sharks. 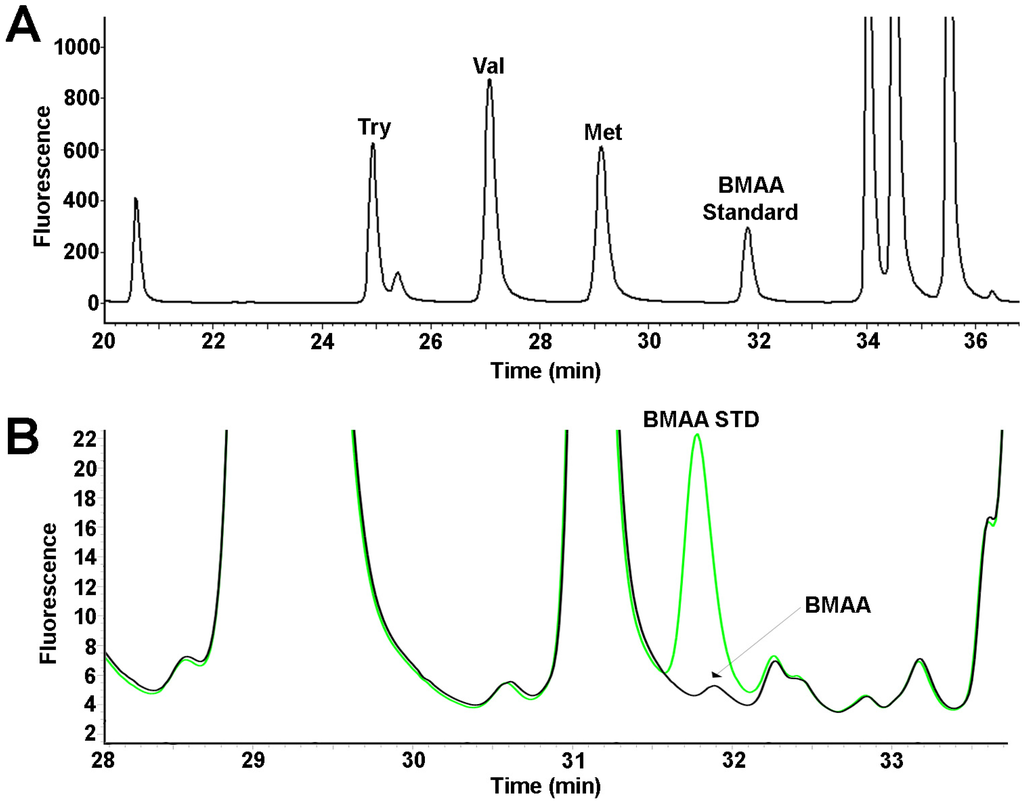 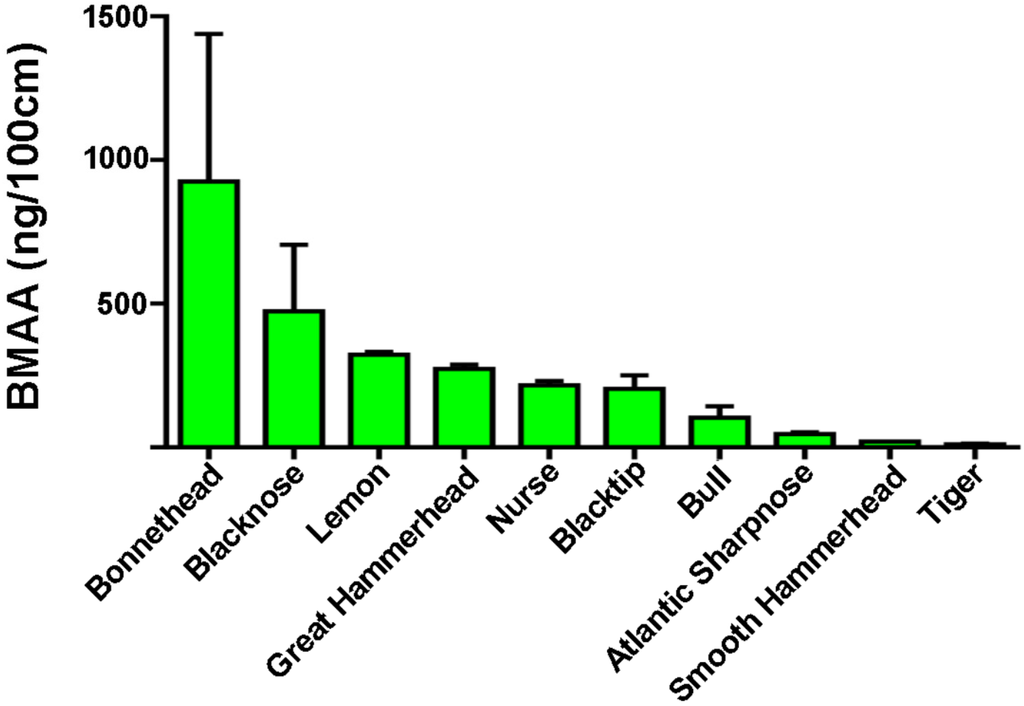