Neutralization of the Principal Toxins from the Venoms of Thai Naja kaouthia and Malaysian Hydrophis schistosus: Insights into Toxin-Specific Neutralization by Two Different Antivenoms
Next Article in Special Issue

Clostridium sordellii lethal toxin (TcsL) is a powerful virulence factor responsible for severe toxic shock in man and animals. TcsL belongs to the large clostridial glucosylating toxin (LCGT) family which inactivates small GTPases by glucosylation with uridine-diphosphate (UDP)-glucose as a cofactor. Notably, TcsL modifies Rac and Ras GTPases, leading to drastic alteration of the actin cytoskeleton and cell viability. TcsL enters cells via receptor-mediated endocytosis and delivers the N-terminal glucosylating domain (TcsL-cat) into the cytosol. TcsL-cat was found to preferentially bind to phosphatidylserine (PS)-containing membranes and to increase the glucosylation of Rac anchored to the lipid membrane. We have previously reported that the N-terminal four helical bundle structure (1–93 domain) recognizes a broad range of lipids, but that TcsL-cat specifically binds to PS and phosphatidic acid. Here, we show using mutagenesis that the PS binding site is localized on the tip of the four-helix bundle which is rich in positively-charged amino acids. Residues Y14, V15, F17, and R18 on loop 1, between helices 1 and 2, in coordination with R68 from loop 3, between helices 3 and 4, form a pocket which accommodates L-serine. The functional PS-binding site is required for TcsL-cat binding to the plasma membrane and subsequent cytotoxicity. TcsL-cat binding to PS facilitates a high enzymatic activity towards membrane-anchored Ras by about three orders of magnitude as compared to Ras in solution. The PS-binding site is conserved in LCGTs, which likely retain a common mechanism of binding to the membrane for their full activity towards membrane-bound GTPases. View Full-Text
Keywords: Clostridium sordellii; Clostridium difficile; large clostridial glucosylating toxin; C. sordellii lethal toxin; phosphatidylserine; Ras Clostridium sordellii; Clostridium difficile; large clostridial glucosylating toxin; C. sordellii lethal toxin; phosphatidylserine; Ras
►▼ Show Figures 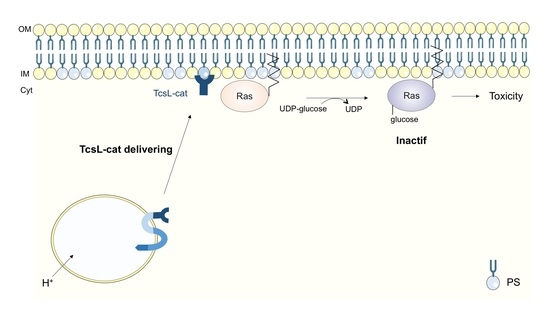