It has been reported that Paulistine in the venom of the wasp Polybia paulista co-exists as two different forms: an oxidized form presenting a compact structure due to the presence of a disulfide bridge, which causes inflammation through an apparent interaction with receptors in the 5-lipoxygenase pathway, and a naturally reduced form (without the disulfide bridge) that exists in a linear conformation and which also causes hyperalgesia and acts in the cyclooxygenase type II pathway. The reduced peptide was acetamidomethylated (Acm-Paulistine) to stabilize this form, and it still maintained its typical inflammatory activity. Oxidized Paulistine docks onto PGHS2 (COX-2) molecules, blocking the access of oxygen to the heme group and inhibiting the inflammatory activity of Acm-Paulistine in the cyclooxygenase type II pathway. Docking simulations revealed that the site of the docking of Paulistine within the PGHS2 molecule is unusual among commercial inhibitors of the enzyme, with an affinity potentially much higher than those observed for traditional anti-inflammatory drugs. Therefore, Paulistine causes inflammatory activity at the level of the 5-lipooxygenase pathway and, in parallel, it competes with its reduced form in relation to the activation of the cyclooxygenase pathway. Thus, while the reduced Paulistine causes inflammation, its oxidized form is a potent inhibitor of this activity.
Keywords: wasp venom; inflammation; pain; peptide synthesis; molecular modeling; docking wasp venom; inflammation; pain; peptide synthesis; molecular modeling; docking

The peptides were prepared by using stepwise solid-phase synthesis based on the chemistry of N-9-fluorophenylmethoxy-carbonyl (Fmoc) with the resin NovaSyn TGS resin (NOVABIOCHEM). The protective groups used for the side-chains were β-t-butyl ester (OtBu) for aspartic acid, t-butyl (tBu) for threonine and serine, trityl (Trt) for glutamine, and t-butoxycarbonyl (Boc) for lysine. The side-chain protective group Trt was used in the synthesis of the oxidized peptide (with the disulfide bridge); the permanent blocking of free thiol groups of cysteine residues was performed by acetamidemethylation (Acm).
The mixture trifluoroacetic acid/1,2-ethanedithiol/anisole/phenol/water (82.5:2.5:5:5:5 by volume) was used for the cleavage of peptide-resin at room temperature for 2 h. The material of synthesis was filtered for removal of the resin, and then added cold (4 °C) anhydrous diethyl ether (Sigma) to precipitate crude peptide, which was collected as sediment after centrifugation at 1000 g at 15 min. The crude peptide was solubilized in water and purified by RP-HPLC. The peptide with the disulfide bridge was obtained by the air oxidation of cysteine residues as previously described [9].
Synthetic Paulistine peptides, including the oxidized form and the reduced and acetoamidated forms, were purified by HPLC (mod. LC 8A, Shimadzu, Kyoto, Japan) using a C18 column (30 mm × 250 mm, 15 µm) (Shim-Pack ODS Prep, Shimadzu, Kyoto, Japan), with an isocratic elution of 45% (v/v) MeCN/H2O (containing 0.05% (v/v) TFA) at a flow rate of 10 mL/min. The elution was monitored at 214 nm with a UV-Vis detector (Shimadzu, mod. SPD-20A Prominence, Kyoto, Japan). The fractions were collected in glass vials, and latter dried in a lyophilizer (Heto, Denmark). The homogeneity and the accuracy of the sequence of the synthetic peptides were assessed by the gas-phase sequencer PPSQ-21A (Shimadzu, Kyoto, Japan) using automated Edman degradation chemistry and ESI-MS analysis.

The mass spectrometric analyses were performed using an ion trap-time of flight hybrid mass spectrometer (LCMS-IT-TOF) produced by Shimadzu Co. (Shimadzu, Kyoto, Japan) The samples were injected into the electrospray transport solvent with an autosampler injector at a flow rate of 0.2 mL/min of MeCN 50% (v/v). Mass spectrometric analyses were carried-out using positive electrospray ionization (ESI+) under the conditions described bellow: CDL temperature was adjusted to 200 °C, 4.5 kV for the voltage of capillaries, 3.5 V was set for the cone lens, a flow rate of the nebulizer gas (nitrogen) of approximately 1.5 L/h and a drying gas (nitrogen) at a flow rate of 100 L/h. Mass spectra were continuously acquired in the range of m/z 50 to m/z 4000, in a time window of 2 min. The data were acquired and analyzed using LCMS Solution software (Shimadzu, Kyoto, Japan).

The search for templates of the sequence of Paulistine was performed using the BLASTP tool and the alignment was formatted and input into the program. To solve the structure of Paulistine, a template was selected at Protein Data Bank (PDB) using the experimental data of a homologous peptide solved by NMR (PDB ID: 2KGH). Synthetic peptide models were built using restraint-based modeling implemented in MODELLER (Version 9.16, San Francisco, CA, USA, 2016) [35] with standard protocols for the comparative protein structure modeling by satisfying the spatial restrains [36]. For each peptide, a total of 1000 models were created, and the best models were selected using the MODELLER objective function [36] and the stereo chemical analysis of PROCHECK [37]. The sequence similarity between Paulistine and the template was 61% (with a sequence identity of 38%). The final models were selected. The models selected had 100% of their residues in the favored regions of the Ramachandran plot, with the best values of the overall G-factor, and the models had lower values of energy minimization. Both reduced and oxidized forms of Paulistine were modeled. The reduced peptide was modeled considering the acetamidomethylation of the thiol groups of cysteine. Pymol was used for the visualization of the models of both forms of Paulistine [38]. After molecular modeling, both peptides were submitted to molecular dynamics simulations in order to study the conformational changes of these peptides as published elsewhere [10].

One of the fundamental questions in structural biology is related to the study of the interaction between a protein and a ligand, and an effective method used to study this interaction is the molecular docking simulation. This type of study is very important for pharmaceutical applications, such as structure-based drug design, because these ligands can inhibit vital proteins.
The molecular docking of ligand agonists to the PGHS2 structure was carried out using the AutoDock3.0.5 software package [39]. All the torsion angles in the small molecules were set free to perform flexible docking. Polar hydrogen atoms were added to PGHS2 by using the hydrogen module in AutoDock Tools (ADT), and the empirical free energy function and the Lamarckian genetic algorithm (LGA) were used for docking. The atomic coordinates of the ligands were obtained from the PDB.
The molecular docking of the structure of PGHS2 with both forms of Paulistine peptide was carried out using the PatchDock web server, version 1.3 [40]. The atomic coordinates of the complete protein (dimer) without its ligands were obtained from the PDB (access code 3LN1) [41]. A global search for all possible binding configurations of the protein and each peptide were made, and a total of 1000 predictions were obtained using PatchDock, which was also used to calculate the biding energy. The ten best models were chosen, refined and ranked again with FireDock.
PDBe PISA, which is an interactive tool for the exploration of macromolecular interfaces, was used to analyze the surface area, physicochemical properties, and to predict free energy of formation, the solvation energy gain and the hydrogen bonds across the interface of the protein:peptide complex after molecular docking simulation [42].

Male Swiss mice weighing between 25 and 30 g were used throughout this study. The housing of mice occurred under controlled humidity (65% ± 5%) and temperature (22 °C ± 1), in a sound-attenuated room subjected to a 12 h light–dark cycle. Food and water were available ad libitum, and mice were taken to the testing room at least 1 h before the experiment. All behavioral testing was performed between 9:00 a.m. and 4:00 p.m. The mice were used only once. All experiments were completed in accordance with the Guidelines for the Ethical Use of Conscious Animals in Pain Research published by the International Association for the Study of Pain [43] and the EC Directive 86/609/EEC for Animal Experiments. The animal manipulation protocols were approved by the Institutional Animals Care Committee (CEUA-IB, protocol 016/2011).

Mice were placed in appropriated acrylic cages containing wired gridding floor 30 min before the assay. During this adaptation period, the paws of the mice were poked 2–3 times. Before paw stimulation, the animals remained quiet and presenting neither exploratory movements nor resting on their paws. In these experiments, it was used an electronic von Frey anesthesiometer, a paw pressure meter fitted with a 0.5 mm2 plastic tip (IITC Inc., Life Science Instruments, Woodland Hills, CA, USA).
A mirror fit below the gridding floor provided a view of the hind paw movements. The use of an electronic von Frey instrument (Insight, Ribeirão Prêto, SP, Brazil) permitted the automatic register of force intensity of the stimulus by the time of paw withdrawn. The maximal force applied was 18 g. The stimulations were repeated until the mice presented at least two similar measurements. If the results were inconsistent (i.e., a great difference in the baseline response compared to the other animals of the experiment), another animal was used. The hyperalgesic effect was induced by the injection through intraplantar (i.pl.) route into one of the hind paws, of either carrageenan (300 μg) or each form of Paulistine (10 μg). The results are reported as the Δ (delta) withdrawal threshold (g).

Edema was induced by the injection of carrageenan into one of the hind paws by the intraplantar (i.pl.) route. The increase of the volume of paws (edema) at the region of tibio-tarsal articulation was measured with a digital paquimeter (São Paulo, SP, Brazil). Indomethacin and Zileuton were administered to evaluate their anti-edematogenic effects. The difference between the values measured in each paw were expressed as percent increase of paw volume.

For evaluation of the nociceptive activity of Paulistine and Acm-Paulistine, both peptides were dissolved in sterile saline (10 μg/50 μL saline) and applied by i.pl. route in one of the hind paws of the mice. The tip of the pressure meter was introduced in the central area of the hind paw (where the compounds were applied with the help of a 26-G needle) to measure the intensity and the time of paw withdrawn. Nociceptivity was evaluated at 30, 60, 120 and 300 min after Paulistine and Acm-Paulistine application) and compared to the control. Carrageenan (Marine Colloids, 300 μg/50 μL sterile saline) was used as the positive control, while the negative control was performed with sterile saline. To evaluate the involvement of leukotriene receptors, Zafirlukast (SIGMA, Saint Louis, MO, USA) was diluted in 0.5% dimethyl sulfoxide (DMSO, SIGMA, SIGMA, Saint Louis, MO, USA) and administered by an oral route at 5.0 mg/k; animals treated with 0.5% (v/v) DMSO solution in sterile saline were used as the control group. The detailed involvement of the different pathways of arachidonic acid metabolism in this process was assayed as previously reported [10], with the use of indomethacin (a cyclooxygenase inhibitor), Celecoxib (a type 2 cyclooxygenase inhibitor), and Zileuton (a lipoxygenase inhibitor).

A two-way analysis variance (ANOVA) was used to compare the groups and doses over all times. Three factors were analyzed: the treatments, the time and the time vs. treatment interaction. When a significant time vs. treatment interaction was detected, a one-way ANOVA followed by Tukey’s test was performed for each time point to distinguish the dose effects [44]. The results with p < 0.05 were considered to be significant. 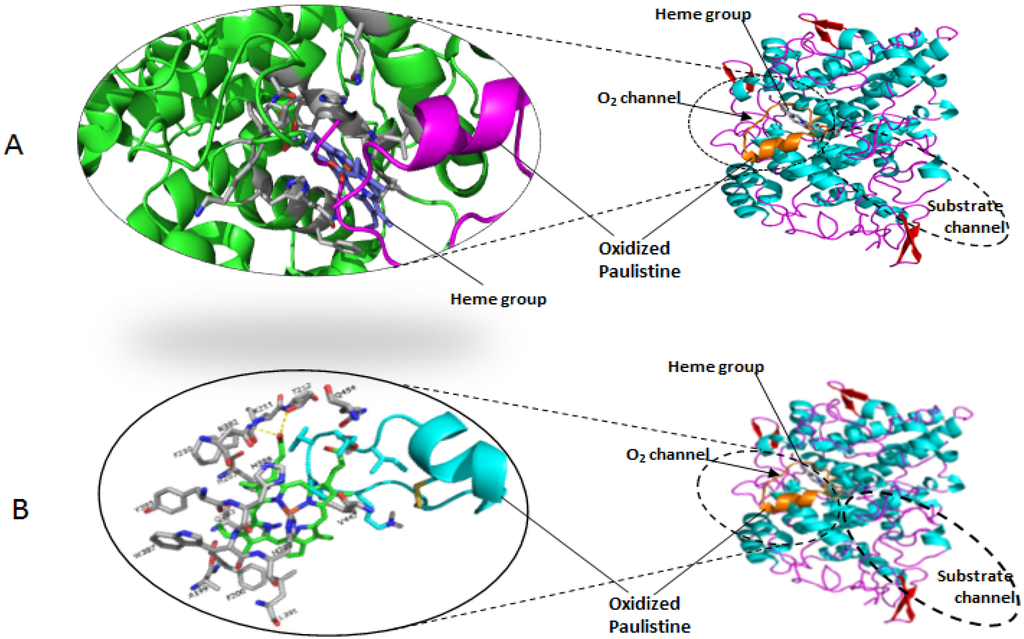 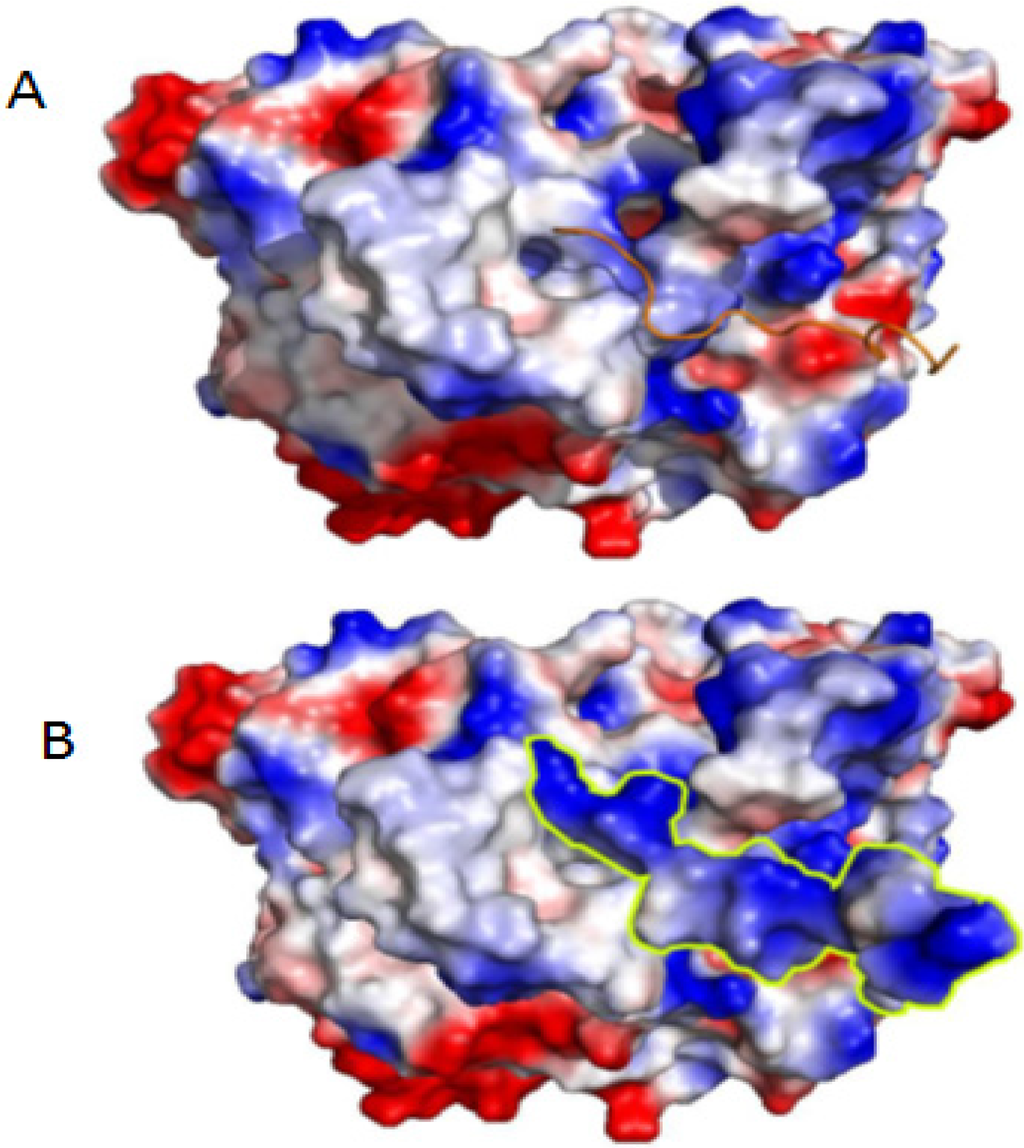 Table 1. Values of ∆Gbind and T∆S calculated for the oxidized form of Paulistine and a series of commercial inhibitors of COX-2 (anti-inflammatory drugs) *.
* Negative values of ΔGbind and positive values of TΔS indicate spontaneous ligand—receptor interaction.