Phycotoxins are monitored in seafood because they can cause food poisonings in humans. Phycotoxins do not only occur singly but also as mixtures in shellfish. The aim of this study was to evaluate the in vitro toxic interactions of binary combinations of three lipophilic phycotoxins commonly found in Europe (okadaic acid (OA), yessotoxin (YTX) and azaspiracid-1 (AZA-1)) using the neutral red uptake assay on two human intestinal cell models, Caco-2 and the human intestinal epithelial crypt-like cells (HIEC). Based on the cytotoxicity of individual toxins, we studied the interactions between toxins in binary mixtures using the combination index-isobologram equation, a method widely used in pharmacology to study drug interactions. This method quantitatively classifies interactions between toxins in mixtures as synergistic, additive or antagonistic. AZA-1/OA, and YTX/OA mixtures showed increasing antagonism with increasing toxin concentrations. In contrast, the AZA-1/YTX mixture showed increasing synergism with increasing concentrations, especially for mixtures with high YTX concentrations. These results highlight the hazard potency of AZA-1/YTX mixtures with regard to seafood intoxication.
Keywords: lipophilic phycotoxins; cytotoxicity; enterocytes; mixtures lipophilic phycotoxins; cytotoxicity; enterocytes; mixtures

Phycotoxins are secondary metabolites produced by some phytoplanktonic unicellular algae. Due to their accumulation in filtering shellfish, several acute food intoxications following human consumption of contaminated shellfish have been well documented [1]. Phycotoxins are classified into hydrophilic and lipophilic groups according to their chemical properties. The EFSA (European Food and Safety Authority) report on marine biotoxins established five classes of toxins in the lipophilic group: okadaic acid (OA) and its analogs, azaspiracids (AZAs), pectenotoxins (PTXs), yessotoxins (YTXs) and spirolides (SPX) [2]. While the effects of OA and AZAs caused in humans have been well described, the effects caused by PTX-2, YTX and SPX still remain unclear, since there is no conclusive proof of human intoxication [1,3]. OA and its analogs, the dinophysistoxins, are polyethers responsible for the diarrhetic shellfish poisoning (DSP), causing symptoms such as nausea, severe diarrhea and abdominal pain [4]. These toxins are found worldwide and are protein phosphatase (PP) inhibitors (primarily PP2A, and to a lesser extent PP1 [5]. AZAs are composed of a spiro-ring assembly, a cyclic amino group and a carboxylic function. They are responsible for azaspiracid poisoning (AZP) [6] with symptoms similar to DSP (nausea and diarrhea), except that neurotoxicity has also been reported during in vivo experiments in mice [7]. Azaspiracids are relatively less common in seafood and have been described only sporadically in some areas in Europe [6], North America [8], Asia [9] and in northwestern Africa [10]. Nevertheless, the major AZA-producing species Azadinium sp. [11] has a widespread geographical distribution [11,12], and reports on new toxic species and new AZA analogs are increasing [13]. Although the mode of action of the AZA group has not been elucidated, the AZA toxins have been shown to inhibit endocytosis [14] and induce cytoskeleton disorganization [15]. Yessotoxins (YTXs) are sulfated polyether toxins with a hydrophobic tail and are found in shellfish all over the world [16]. The mode of action of YTXs has not yet been characterized, but YTX is known to induce endoplasmic reticulum stress [17], apoptosis [18], and endocytosis inhibition [19]. OA, AZA and YTX analogs can co-occur in shellfish [20,21,22]. Since no data are available on the toxicity of OA, AZA-1 and YTX mixtures in humans, EFSA has recommended to investigate the effects of these possible combinations [2]. Thus far, the effects of binary mixtures of OA and YTX [23], OA and AZA-1 (Azaspiracid-1) [24], and YTX and AZA-1 [25], have been studied in mice. However, none of these studies showed toxic interactions. As in vivo studies require laboratory animals and do not enable studying a large range of mixtures combinations, we therefore investigated the combined effects of lipophilic toxins using an in vitro approach in order to supplement previous results obtained in vivo. OA, AZA-1 and YTX have been shown separately to induce alterations in the mouse intestine [7,26,27]. Therefore, we conducted in vitro studies on human intestinal cells. Caco-2 cells were selected as a model for human enterocytes, according to the OA toxicity results already available on this cell line [28,29] as well as for AZA-1 and YTX toxicity [30,31]. To address the combined effects on a non-cancerous human intestinal cell line, the human intestinal epithelial crypt-like cells (HIEC), the non-transformed, non-immortalized cell model isolated from intestines of human embryos [32] was selected. This cell model, under specific conditions, expresses specific crypt-cell markers, and can be maintained in culture with differentiated characteristics for up to 30 passages [33].

OA, AZA-1 and YTX were purchased from IMB/NRC (Halifax, NS, Canada). For assays, toxins were prepared in culture medium without FCS.

Neutral red powder (N4638) was purchased from Sigma-Aldrich (Lyon, France) and 0.1% neutral red solution was prepared in Caco-2 and HIEC culture media. Following treatment with toxins, cells were rinsed with PBS, and 100 µL of neutral red solution was added to each well and incubated for 2 h at 37 °C. Cells were then rinsed with PBS and 100 µL of solubilization solution (1% acetic acid in 50% ethanol) was added to each well. Absorbance was read at 540 nm and viability was calculated as percentage of mean absorbance (at least three independent experiments) relative to the control cells (growth medium with 5% MeOH).

Cytotoxicity of combined phycotoxins was studied for three binary mixtures: OA and YTX, OA and AZA-1 and AZA-1 and YTX (Table 1). For each combination of toxins, four different ratios of toxins were tested, ranging from a ratio with high potency of one toxin to a ratio with high potency for the other. The chosen toxin ratios were based on preliminary individual cytotoxicity experiments.

Cytotoxicity of individual phycotoxins. The dose-response cytotoxicity of each phycotoxin was modeled using a Hill slope model on GraphPad Prism 5 (GraphPad Software, La Jolla, USA, 2010). If the coefficient m, indicative of the shape of the dose-response curve, was >1 (sigmoid curve) and if the linear correlation coefficient of the model was greater than or equal to 0.9, the inhibitory concentration 50% (IC50) was calculated.
Cytotoxicity of phycotoxin mixtures. For each phycotoxin, the dose–response cytotoxicity was modeled using the median-effect equation of the mass-action law described by Chou and Talalay [36]. The median-effect equation is defined by: where D is the dose, Dm is the dose required for 50% inhibition, Fa is the fraction affected by the dose D, m is a coefficient of the sigmoidicity of the dose effect, and Fu = 1 – Fa.
The combination index (CI) method was used to analyze interactions between phycotoxins. Following Chou and Talalay (1984) [36], the CI method was calculated as follows: where (D)1 and (D)2 are the doses of the two mixed phycotoxins, and (Dm)1 and (Dm)2 are the doses of the individual phycotoxins, respectively. CI < 1, CI = 1 and CI > 1 indicate if the mixture displays a synergistic, additive or antagonistic effects, respectively. CI values were established for cytotoxicity percentages ranging from 5% to 95% (corresponding to Fa values ranging from 0.05 to 0.95). For Fa values of 0.25, 0.50 and 0.75, we determined the dose reduction index (DRI) values. The DRI is a measure of how many fold the dose of each drug in a synergistic combination is reduced, for a given effect level, compared with the doses of each drug alone. The DRIs were only calculated when the CI values indicated synergism. The dose-response analyses of phycotoxin mixtures and the CI/DRI calculation were performed using CompuSyn software, version 3.01 (ComboSyn Inc., Paramus, NJ, USA).

3.2. Combined Cytotoxicity of AZA-1 and YTX

The type of interaction (synergism, additivity or antagonism) for binary mixtures of OA, AZA-1 and YTX were characterized using the CI method. Four ratios of toxins were tested using the neutral red uptake assay (Table 2). These ratios were arbitrary defined, according to IC50 values of individual toxins. As all toxins are not equally potent, molecular ratios were determined in order that, in a binary combination of two toxins A and B, two mixtures will enhance toxicity mainly due to toxin A, and the two others will enhance toxicity mostly due to toxin B. Then, CI values were calculated from Fa values of 0.05 (corresponding to IC05) to 0.95 (corresponding to IC95) (Figure 1, Figure 2 and Figure 3). Dose-reduction indices (DRI) were calculated when synergism (CI < 1) was observed (Table 3).
AZA-1/YTX mixtures displayed a dose-dependent cytotoxicity on both Caco-2 and HIEC cells. Toxins interactions were analyzed using the CI method applied on cytotoxicity data (Figure 1). Figure 1A suggests that, in Caco-2 cells, in mixtures in which toxicity is mainly due to the presence of AZA-1, mixture 1 displayed additivity, while mixture 2 showed only a slight synergistic effect between IC10 and IC75 with a CI value ranging from 0.74 to 0.88. For mixtures 3 and 4 with a toxic effect mainly induced by the presence of YTX, mixture 3 showed a slight synergistic effect, and even more pronounced in mixture 4. Figure 1B suggests that a synergistic effect occurred also in HIEC, and was mainly caused by mixtures where AZA-1 is the main toxic compound (Mix 1 and 2), and to a lesser degree with mixture 3 where YTX is the main toxic compound. The synergistic effect was even more pronounced as CI level reached a value of 0.3. In general, CI values ranged between 0.9 and 0.3, and synergism was greater at high toxic potency (Fa > 0.5). Conversely to Caco-2 cells, mixture 4 displayed additivity in HIEC cells.
The DRI values in Table 3 indicate for each toxin the fold reduction in the IC25, IC50 and IC75 values to apply in order to obtain the theoretical additive effect. Except for mixture 4 in HIEC cells and mixture 1 in Caco-2 cells, all mixtures displayed a synergistic effect. The combination index method allows calculating a theoretical dose reduction index, which can be applied as a factor on toxins concentration when an additive effect is considered. The DRI values for YTX in both Caco-2 and HIEC is higher to the DRI values for AZA-1, suggesting that, in the mixture, YTX is more potent than AZA-1.

3.3. Combined Cytotoxicity of AZA-1 and OA

AZA-1/OA mixtures displayed dose-dependent cytotoxicity on Caco-2 and HIEC cells. Toxins interactions were analyzed using the CI method applied on cytotoxicity data (Figure 2). Figure 2 suggests that mixtures of AZA-1 and OA displayed principally antagonistic cytotoxicity in Caco-2. Indeed, in Figure 2A, all mixtures, 1, 2, 3 and 4, show CI values ranging between 1.2 and 3.3 in Caco-2. In HIEC cells (Figure 2B), when the mixture is driven by one of the two toxins (mixture 1, where toxicity is mainly due to the presence of AZA-1, and mixture 4 where the toxicity is mainly due to the presence of OA), an antagonistic cytotoxicity was observed with CI values between 1 and 2.8. However, for mixtures 2 and 3, the toxic effects of the two toxins were additive (CI between 0.8 and 1.2).

3.4. Combined Cytotoxicity of YTX and OA

Based on neutral red uptake assay, OA, AZA-1 and YTX induced cytotoxicity on both Caco-2 and HIEC cell lines. Binary combinations of OA and AZA-1 and OA and YTX showed an additive and, in few cases, an antagonistic effect using the concept of combination index on our models. However, data analysis claimed synergism between AZA-1 and YTX on both Caco-2 and HIEC cells. Our in vitro findings could not enable any extrapolation to in vivo situations without further investigation, including a clear characterization of toxins mechanisms of action in mixtures.

Elizabeth Herring, Eric Tremblay and Blanche Senicourt from the Laboratory of Intestinal Physiopathology from Sherbrooke University (Canada) are gratefully acknowledged. 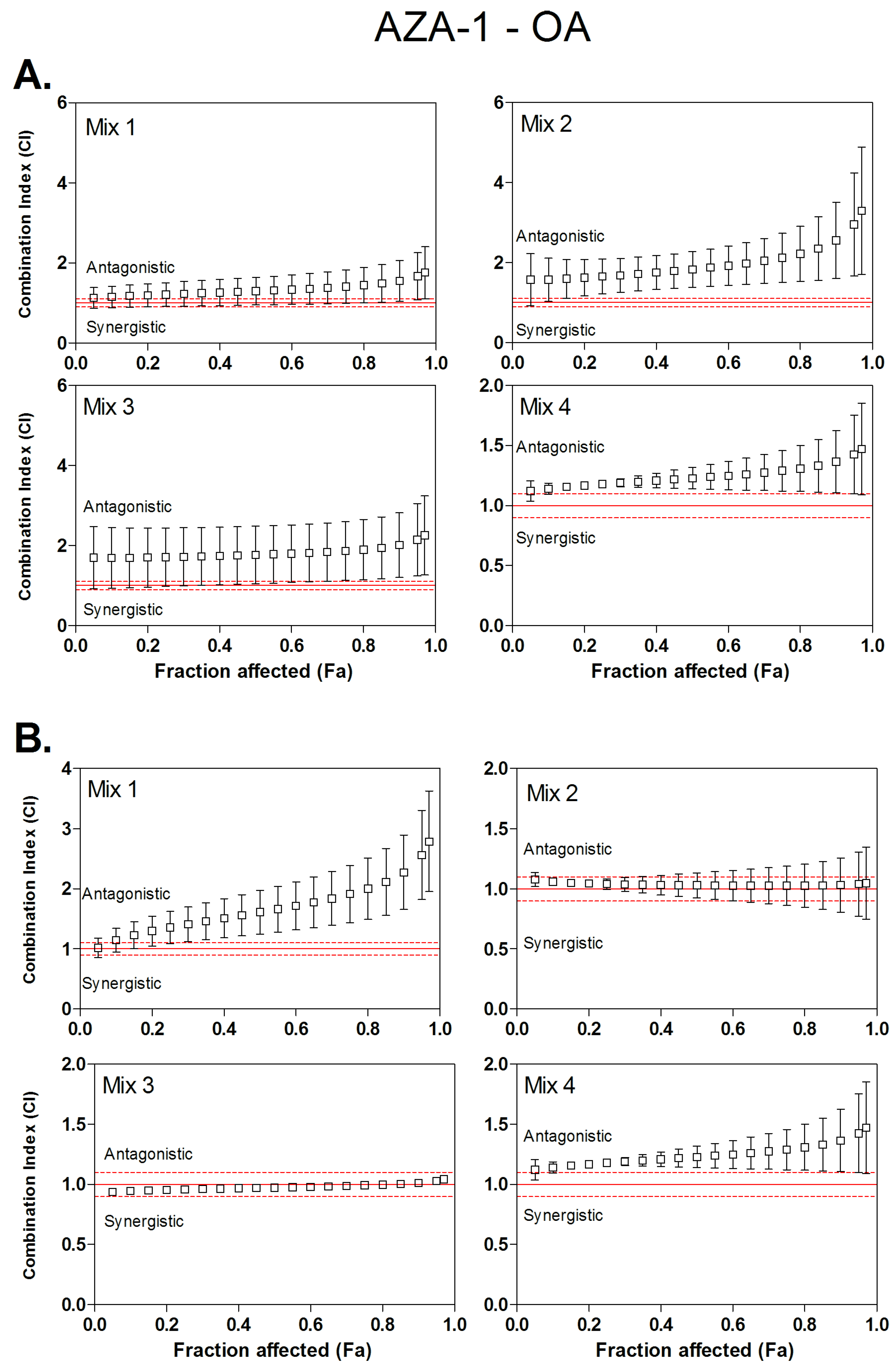 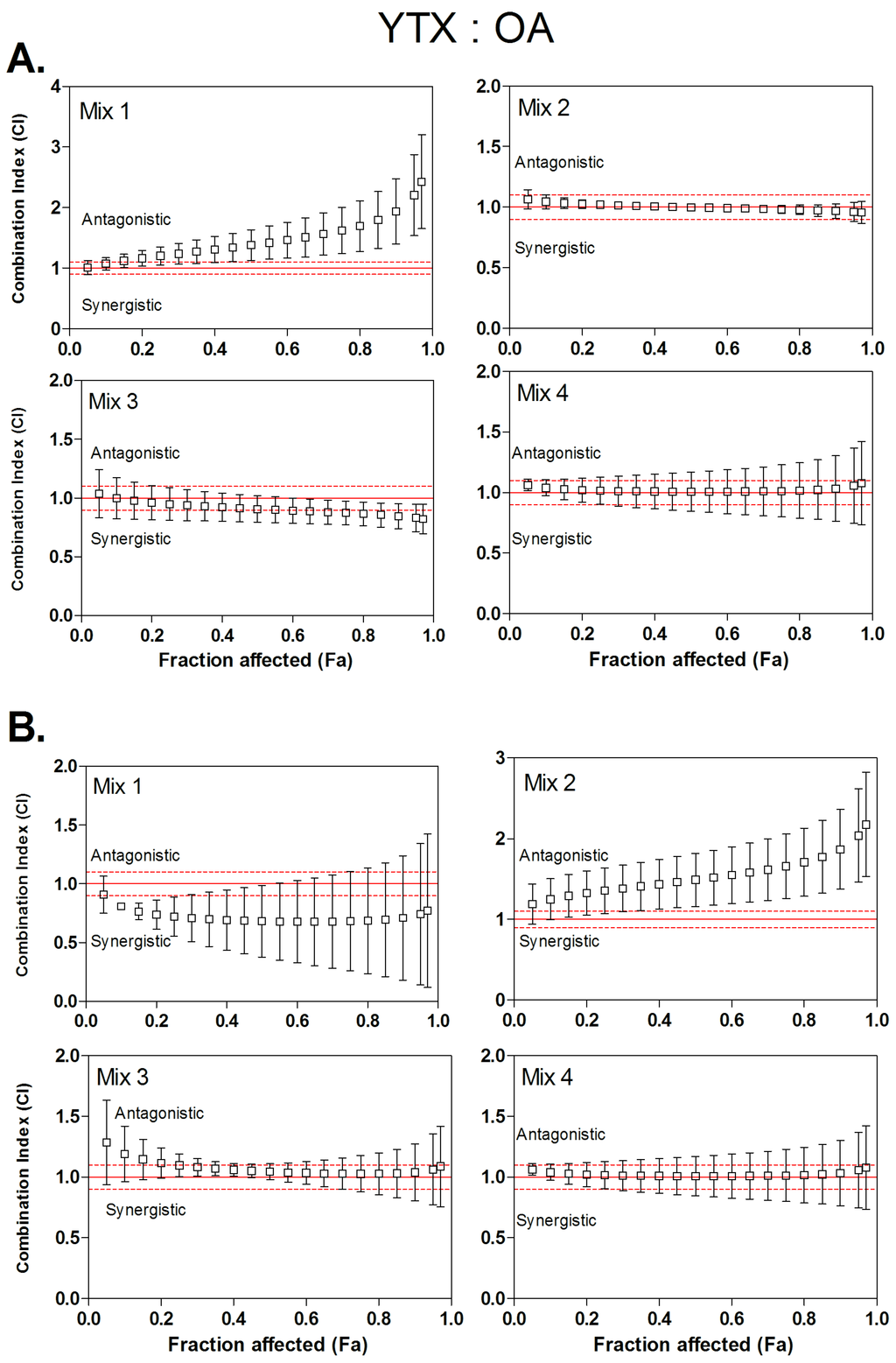