Recent Advances and Future Challenges in Modified Mycotoxin Analysis: Why HRMS Has Become a Key Instrument in Food Contaminant Research

Metabolism of HT-2 Toxin and T-2 Toxin in Oats

The Fusarium mycotoxins HT-2 toxin (HT2) and T-2 toxin (T2) are frequent contaminants in oats. These toxins, but also their plant metabolites, may contribute to toxicological effects. This work describes the use of 13C-assisted liquid chromatography–high-resolution mass spectrometry for the first comprehensive study on the biotransformation of HT2 and T2 in oats. Using this approach, 16 HT2 and 17 T2 metabolites were annotated including novel glycosylated and hydroxylated forms of the toxins, hydrolysis products, and conjugates with acetic acid, putative malic acid, malonic acid, and ferulic acid. Further targeted quantitative analysis was performed to study toxin metabolism over time, as well as toxin and conjugate mobility within non-treated plant tissues. As a result, HT2-3-O-β-d-glucoside was identified as the major detoxification product of both parent toxins, which was rapidly formed (to an extent of 74% in HT2-treated and 48% in T2-treated oats within one day after treatment) and further metabolised. Mobility of the parent toxins appeared to be negligible, while HT2-3-O-β-d-glucoside was partly transported (up to approximately 4%) through panicle side branches and stem. Our findings demonstrate that the presented combination of untargeted and targeted analysis is well suited for the comprehensive elucidation of mycotoxin metabolism in plants. View Full-Text
Keywords: metabolomics; liquid chromatography–high-resolution mass spectrometry; stable isotopic labelling; type A trichothecenes; masked mycotoxins; xenobiotics; cereals metabolomics; liquid chromatography–high-resolution mass spectrometry; stable isotopic labelling; type A trichothecenes; masked mycotoxins; xenobiotics; cereals
►▼ Show Figures 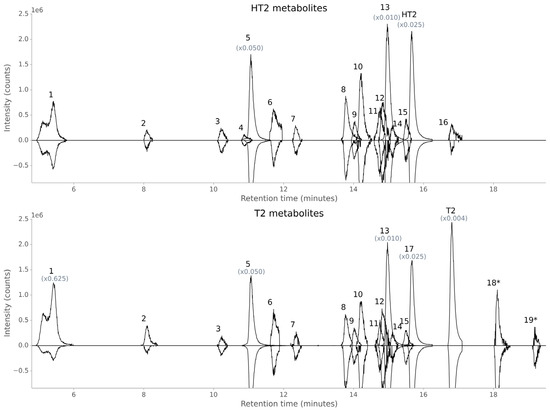