Rotenone is a naturally-occurring plant compound and a specific inhibitor of complex I of the mitochondrial respiration chain. It had been found to induce cell death in a variety of cells [1]. Features include mitochondrial impairment, microglial activation, oxidative damage, dopaminergic degeneration, and l-dopa-responsive motor deficit. Rotenone was thought to elevate mitochondrial reactive oxygen species production [1], decreasing cellular ATP levels [2] and mitochondrial membrane potential [3]. Other reports have indicated that rotenone induces apoptosis via an increase in mitochondria reactive oxygen species production and neurotoxicity associated with increased levels of caspase family gene expression [4] in PC12 cells.
Bee venom (BV) is known to be a very complex mixture of active peptides including melittin, phospholipase A2, apamin, adolapin, and mast cell-degranulating peptide [5]. Apamin, phospholipase A2 and melittin had a neuroprotective effect [6,7,8] and adolapin had an anti-inflammatory effect [9].
Many experimental studies on the biological activities of BV have been reported and its anti-inflammatory effects, as well as its activities in relieving pain of rheumatoid arthritis and in immune modulation, have been described [10,11,12,13]. In addition, BV has also been reported to enhance activation of the apoptotic signaling pathway in experimental osteosarcoma, breast cancer, and lung cancer cell lines [14,15,16]. Although previous studies have clearly demonstrated that BV possesses anti-proliferative and pro-apoptotic effects, those studies have primarily been performed in cancer cell lines. Recently, Doo et al. have shown that BV protected neuronal cells against MPP+-induced apoptotic cell death via activation of PI3K/Akt-mediated signaling and inhibition of cell death signaling [17].
Therefore, in this study, we investigated the effects of BV on rotenone-induced cell toxicity in NSC34 motor neuron cells. The MAPK family is known to regulate neuronal survival and death [18,19,20]; ERK1/2 is activated by growth factors, whereas JNKs are activated by cell stress-induced signaling. We examined the effect of rotenone on the activation of JNK and ERK1/2 related to cell death and cell survival, respectively. In our previous study, we demonstrated that BV had a neuro-protective effect against glutamate-induced toxicity via inhibition of the expression of phospho-JNK and phopho-ERK in neuronal cells [21]. We report that pretreatment of BV significantly attenuated rotenone-mediated toxicity via inhibition of the activation of c-Jun N-terminal kinase (JNK) and an increase of extracellular signal-regulated kinase (ERK) signaling pathway. In addition, pretreatment with BV significantly inhibited mitochondria impairment and the expression of cleaved caspase-3 in NSC34 neuronal cells. The present results may have clinical implications and suggest that BV may be a potential treatment for the prevention of oxidative stress-induced cell death in neurodegenerative diseases.

The motor neuron cell line NSC34 was obtained from Cellutions Biosystems Inc. (Toronto, ON, Canada). Cells were cultured in Dulbecco’s modified Eagle’s medium (DMEM) supplemented with 10% FBS, 100 U/mL penicillin, and 100 µg/mL streptomycin at 37 °C with 5% CO2. Cells were subcultured in a fresh culture dish when growth reached 70%–90% confluence (i.e., every 2–3 days) as recommended by Cellutions Biosystems Inc. In all experiments, cells were incubated in the presence or absence of 2.5 µg/mL of BV before the addition of 10 μM rotenone to the culture media.

Cell viability was determined by a modified MTT (3-[4,5-dimethyl-thiazol-2-yl]-2,5-diphenyltetrazolium bromide) reduction assay. This assay is based on the ability of active mitochondrial dehydrogenase to convert dissolved MTT into water-insoluble purple formazan crystals. NSC34 motor neuron cells were plated in 96-well plates (2 × 104 cells/well). After 24 h, the cells were treated with the indicated concentration of BV for 24 h prior to 10 μM rotenone treatment for 24 h. Briefly, MTT was added to each well at a final concentration of 0.5 mg/mL, and the plates were incubated for 1 h at 37 °C. After removing the culture medium, DMSO was added, and the plates were shaken for 10 min to solubilize the formazan reaction product. The absorbance at 570 nm was measured using a microplate reader (Bio-rad, Hercules, CA, USA).

MitoTracker Red CMXRos (Molecular Probes, Eugene, OR, USA) is a red fluorescent dye that stains mitochondria in live cells. NSC34 motor neuron cells were plated in 12-well plates (5 × 104 cells/well). After 24 h of cell seeding, the cells were treated with the indicated concentration of BV for 24 h prior to 10 μM rotenone treatment for 24 h. Briefly, cells were stained with MitoTracker at a final concentration of 100 nM according to the standard protocol. The cells were fixed with 4% paraformaldehyde at room temperature, and then washed with phosphate-buffered saline twice. The cover slip was fixed using Fluoromount to the slide glass.

To examine the cytotoxicity of NSC34 cells after rotenone treatment, we incubated NSC34 motor neuron cells with 10 μM rotenone for various time periods (0, 3, 6, 12, and 24 h). Our results showed that rotenone decreased cell survival in a time-dependent manner (Figure 1A). Compared to untreated NSC34 cells, 10 μM rotenone treatment for 24 h resulted in a 37% decrease in cell viability. To investigate whether BV attenuates rotenone-induced cytotoxicity, we performed a cell viability test on the cells treated with 10 μM rotenone for 24 h with or without 2.5 µg/mL BV pretreatment. BV pretreatment prevented cell death induced by 10 μM rotenone, with about 29% protection for a dose of 2.5 µg/mL BV compared to rotenone-treated cells (Figure 1B). These results indicate that BV pretreatment had a protective effect against rotenone-induced cytotoxicity. 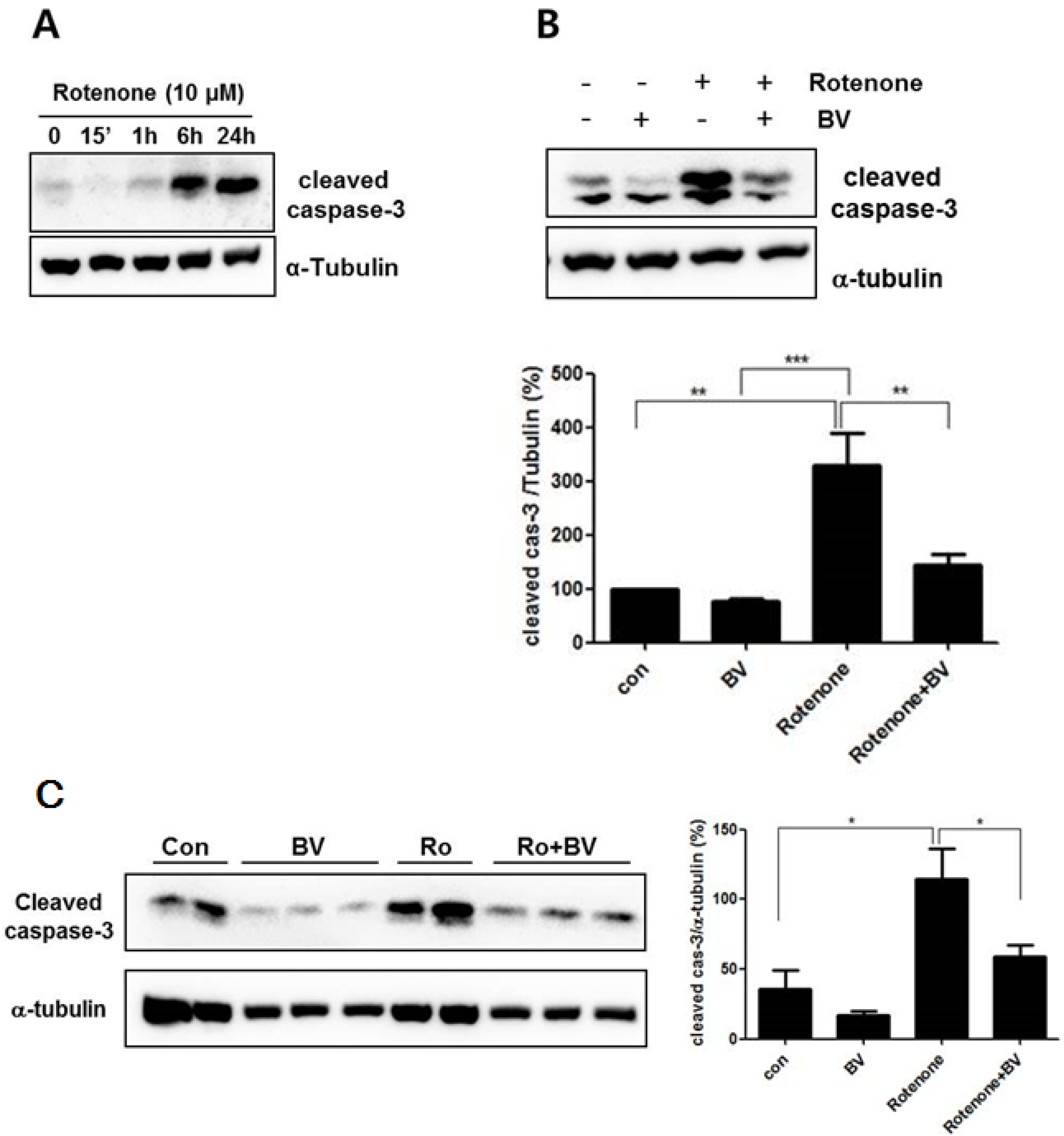 The present study demonstrates that BV reduces rotenone-induced cell death in NSC34 cells by blocking the JNK and ERK1/2 signaling pathways. The MAPK family, including ERK1/2, stress-activated protein kinase/c-jun NH4-terminal kinase (SAPK/JNK), and p38 MAPKs [22,23], play central roles in the signaling pathways involved in cell proliferation, survival, and apoptosis. ERK1/2 are activated by mitogens and growth factors leading to cell growth and survival, whereas JNK and p38 MAPK are preferentially activated by pro-inflammatory cytokines and oxidative stress resulting in cell differentiation and apoptosis [24]. Here, we show that rotenone treatment causes decreased phosphorylation of ERK1/2 and increased phosphorylation of JNK. However, BV pretreatment induces the reduction of JNK and an increase of ERK1/2 activation in rotenone-treated NSC34 cells. After rotenone treatment, cell death was induced by the up-regulation of capase-3 activation and mitochondria aggregation leading to mitochondria dysfunction. However, BV treatment significantly suppressed the rotenone-induced activation of caspase-3 and mitochondria impairment in NSC34 cells. Taken those data together, we suggest that BV treatment could be useful for the inhibition of oxidative stress induced cell death in neurodegenerative diseases.
BV extracted from honeybees has been used in traditional oriental medicine. BV is traditionally used for the treatment of chronic inflammatory diseases such as rheumatoid arthritis and for relief of pain in oriental medicine [25]. In this study, BV attenuated rotenone-induced cell toxicity through inhibition of the JNK and activation of the ERK in neuronal cells. The optimized concentration of 2.5 μg/mL BV increased the expression of phospho-AKT [26]. The activation of MAPKs, including ERK, p38, and JNK [27,28], activated by interactions with a small GTPase and/or phosphorylation by protein kinases downstream from cell surface receptors. Previous reports have demonstrated that ERK is involved in growth-associated responses and cell differentiation. However, JNK and p38 are phosphorylated by environmental stresses, including the cytokine-like lipopolysaccharide (LPS) and oxidative stress [28].
Rotenone is used worldwide as an inhibitor of mitochondrial respiratory chain complex I, and induces PD-like symptoms in neurons through disrupting ATP supply [29]. Since it also increases ROS release and cause cell apoptosis, exposure of animals of rotenone induces dopaminergic cell death production [30,31].
Wagdy et al. have shown that BV acupuncture (BVA) has a neuroprotective effect against rotenone-induced oxidative stress, neuroinflammation, and cell death in PD-like animal model [32]. BV treatment inhibited rotenone-induced activation of caspase-3 and mitochondria aggregation inducing mitochondrial dysfunction. Those results provide that it is possible that multiple signaling pathways are involved in protective effects of BV, which deserves to be further investigated. Mitochondrial structure alternation by rotenone plays principal roles in cell death [33,34], which are critical pathological factors in neurodegenerative diseases including Alzheimer’s disease (AD), and amyotrophic lateral sclerosis (ALS) [35,36]. In further study, it is necessary to evaluate the effect of BV on genetically-engineered neurodegenerative disease animal models.

This work was supported by grants (K13012) from the Korea Institute of Oriental Medicine (KIOM), South Korea.

E.J.Y. designed the experiments and analyzed the data as well as wrote the manuscript; S.Y.J. executed MTT assay, Western blot analysis, and Mitotracker staining and K.W.L. performed primary neuronal cell culture experiment. S.M.C. discussed with the manuscript. All authors have read and approved the final manuscript.