Pharmacological Alternatives for the Treatment of Neurodegenerative Disorders: Wasp and Bee Venoms and Their Components as New Neuroactive Tools

:
Cholangiopathy is a chronic immune-mediated disease of the liver, which is characterized by cholangitis, ductular reaction and biliary-type hepatic fibrosis. There is no proven medical therapy that changes the course of the disease. In previous studies, melittin was known for attenuation of hepatic injury, inflammation and hepatic fibrosis. This study investigated whether melittin provides inhibition on cholangitis and biliary fibrosis in vivo. Feeding 3,5-diethoxycarbonyl-1,4-dihydrocollidine (DDC) to mice is a well-established animal model to study cholangitis and biliary fibrosis. To investigate the effects of melittin on cholangiopathy, mice were fed with a 0.1% DDC-containing diet with or without melittin treatment for four weeks. Liver morphology, serum markers of liver injury, cholestasis markers for inflammation of liver, the degree of ductular reaction and the degree of liver fibrosis were compared between with or without melittin treatment DDC-fed mice. DDC feeding led to increased serum markers of hepatic injury, ductular reaction, induction of pro-inflammatory cytokines and biliary fibrosis. Interestingly, melittin treatment attenuated hepatic function markers, ductular reaction, the reactive phenotype of cholangiocytes and cholangitis and biliary fibrosis. Our data suggest that melittin treatment can be protective against chronic cholestatic disease in DDC-fed mice. Further studies on the anti-inflammatory capacity of melittin are warranted for targeted therapy in cholangiopathy.
Keywords:
cholangiopathy; melittin; DDC-fed mice

Liver fibrosis refers to a classical outcome of many chronic liver diseases irrespective of the etiology of injury. It is characterized by changes in the composition and quantity of extracellular matrix (ECM) deposits distorting the normal structure by forming fibrotic scars. Failure to degrade the accumulated ECM is a major reason why fibrosis progresses to cirrhosis in liver. Various insults, such as viral infection, drugs or metabolic disorders, contribute to the progression of liver fibrosis. Among them, improper regulation of bile flow (i.e., cholestasis), which causes hepatic inflammation and subsequent tissue injury, is one of the main insults for cholangiopathies [1].
As the main cause of liver-related death, cholangiopathies are also the leading cause of liver transplantations in paediatric patients (50%) and the third leading cause in adults (20%) [1,2]. Cholangiopathies, such as primary sclerosing cholangitis (PSC), primary biliary cirrhosis (PBC) and drug-induced bile duct damage, may result in cholestasis, which is characterized by the loss of cholangiocytes through necrosis by apoptosis [3]. Cholangiocyte proliferation can occur during cholangiopathies, resulting in the formation of new side branches to ducts in an effort to regain function and portal/periportal inflammation [4,5].
Cholangiocyte proliferation is described as the expanded population of epithelial cells at the interface of the biliary tree, which refers to the proliferation of pre-existing ductules, progenitor cell activation and the appearance of intermediate hepatocytes [6,7]. The ability of cholangiocytes to proliferate is important in many different human pathological conditions, such as the regaining of proper liver function and the remodelling of biliary cirrhosis in chronic cholestatic conditions.
Lately, 3,5-diethoxycarbonyl-1,4-dihydrocollidine (DDC)-fed mice have been suggested to be used as a novel model for sclerosing cholangitis and biliary fibrosis. Chronic feeding of DDC in mice causes cholangitis with a pronounced ductular reaction, onionskin-type periductal fibrosis and, finally, biliary fibrosis, reflecting several specific pathological hallmarks of human PSC [8]. This model is therefore especially useful to investigate the mechanisms of chronic cholangiopathies and their consequences, including biliary fibrosis, and to test novel therapeutic approaches, such as melittin, for these diseases [8,9].
Melittin is a cationic, haemolytic peptide that is the major bioactive component in honey bee (Apis mellifera) venom, and it has been shown to play a role in attenuating fibrosis in various animal models [10,11]. Previous studies have shown that melittin treatment reduced the expression of inflammatory proteins in inflammatory diseases [12]. These studies are informative, but they are not enough to demonstrate that melittin can prevent the development of the inflammatory molecular mechanisms of sclerosing cholangitis. Therefore, the aim of this work was to determine how melittin could become a profibrogenic control and to characterize the underlying mechanism for this effect. The biological properties of melittin were examined in chronic liver injury using DDC-fed model.

2.1. Effects of Melittin on DDC-Fed Mice 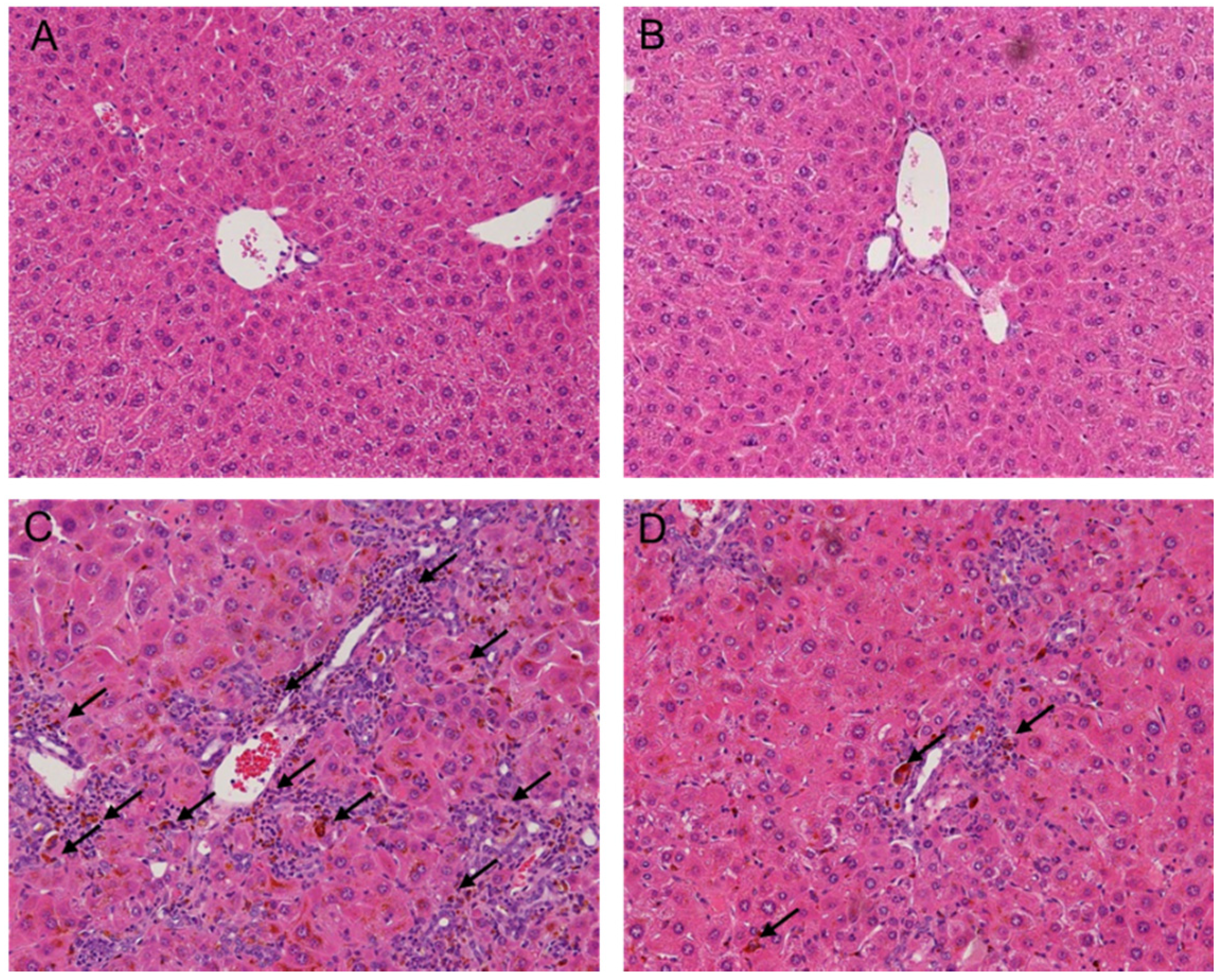 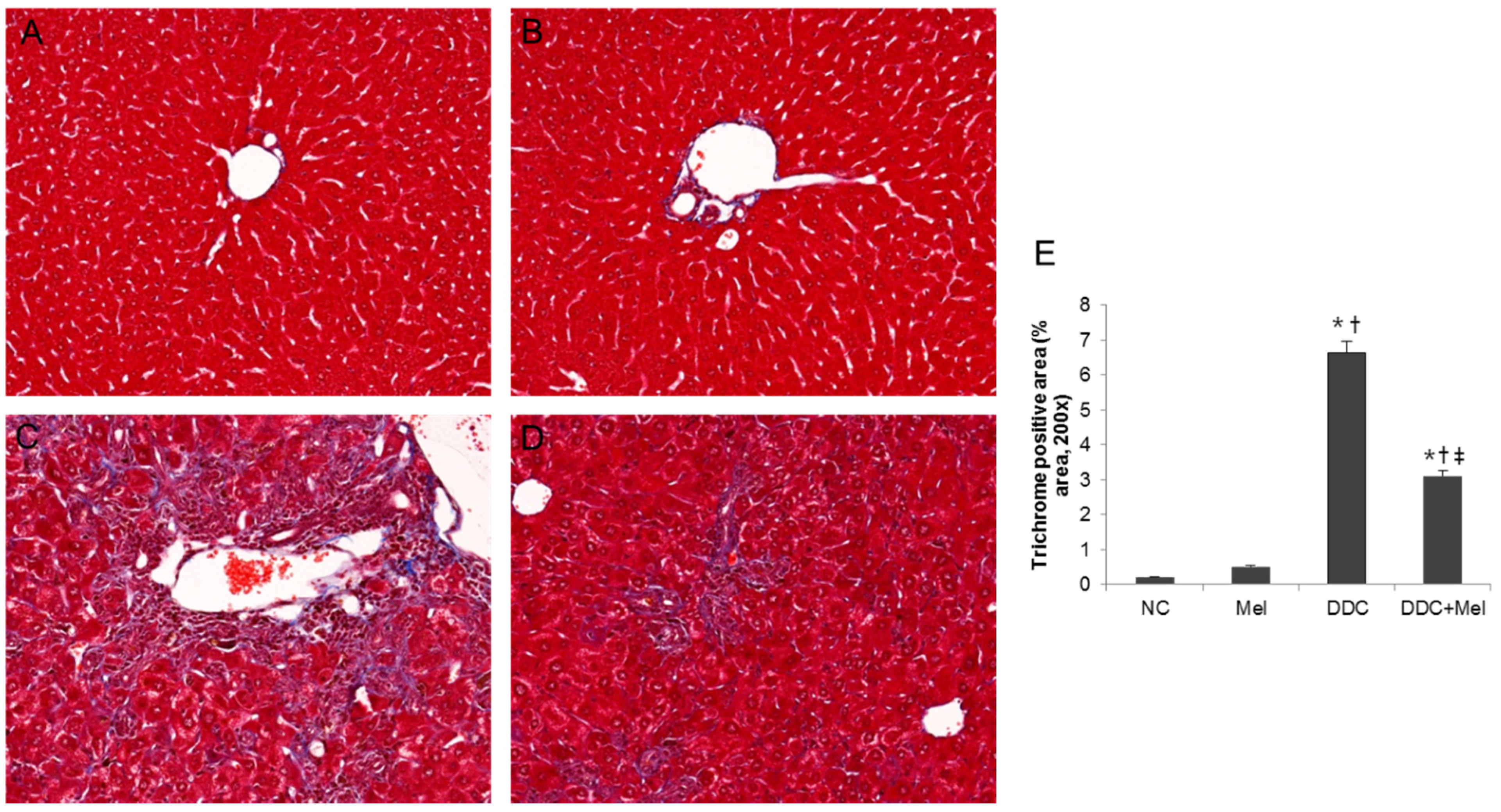 DDC-fed mice demonstrated pronounced hepatic inflammatory response characterized by an increase of infiltrating inflammatory cells near bile ducts (Figure 1C). In contrast, treatment with melittin changed the inflammatory response in portal tracts (Figure 1D). To investigate whether melittin could influence inflammatory changes in DDC-fed mice, pro-inflammatory cytokines were examined in the livers of experimental mice. Pro-inflammatory cytokines, such as TNF-α and IL-6, are key players in eliciting an inflammatory reaction during liver fibrogenesis [13,14]. The expressions of TNF-α and IL-6 were significantly increased in the DDC-fed mice, whereas melittin treatment markedly abrogated this activation (Figure 4). During liver injury, IL-6 activates STAT3 in liver parenchymal and non-parenchymal cells [15,16]. While chronic DDC feeding activated p-STAT3 in the DDC group, the expression level of p-STAT3 was significantly reduced by treatment with melittin. Moreover, the expression level of MCP-1, which promotes liver fibrosis by recruitment of macrophages, was determined by immunohistochemical staining. As shown in Figure 5A,B, MCP-1-positive cells were barely detected in liver sections from the NC and Mel groups. However, MCP-1-positive areas in the DDC group were significantly increased in liver sections, especially near portal tracts (Figure 5C). Compared to the DDC group, treatment with melittin inhibited MCP-1 expression in DDC + Mel liver (Figure 5D). These results indicate that melittin markedly attenuates the levels of pro-inflammatory cytokines during chronic DDC feeding, which may result in the suppression of DDC-induced cholangitis. 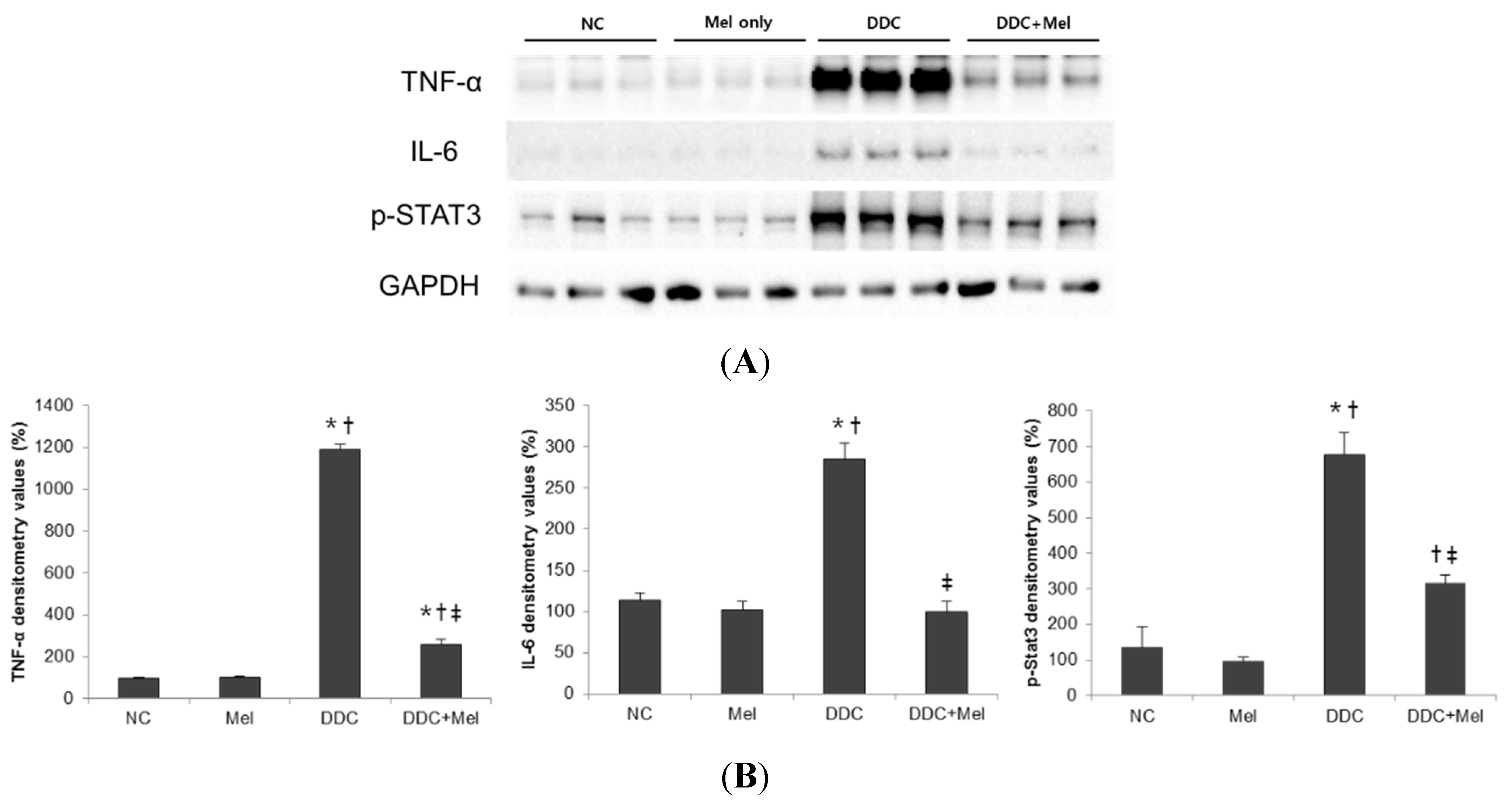 2.3. Melittin Suppresses Liver Fibrosis in the Livers of DDC-Fed Mice

Chronic exposure to injuries in cholangitis becomes a progressive course of cholestatic liver with inflammation and fibrosis of bile ducts. Much attention has been focused on the central role of TGF-β1 upregulation as a prototypical fibrogenic cytokine in liver fibrosis [17]. Western blotting results showed that the expression of TGF-β1 was significantly increased in DDC mice, whereas melittin treatment markedly decreased the expression of TGF-β1 in DDC + Mel livers (Figure 6). The expressions of TGF-β1-regulated ECM protein, fibronectin and vimentin were increased in DDC-fed mice. Treatment with melittin effectively abrogated this increase in the DDC + Mel group. During tissue remodelling in liver fibrosis, FSP-1 is considered a marker of fibroblasts in fibrotic liver. DDC feeding significantly increased the number of cells positive for FSP-1 (Figure 7). However, melittin treatment resulted in a reduction in the FSP-1-positive cells in DDC + Mel livers. Along with the upregulation of TGF-β1 and ECM proteins, the expression level of p-Smad2 was increased by chronic DDC feeding in the DDC group (Figure 8). Melittin treatment attenuated the expression of p-Smad2 in the DDC + Mel group. Taken together, these results show that melittin might protect liver during DDC feeding by attenuating fibrotic gene expression. 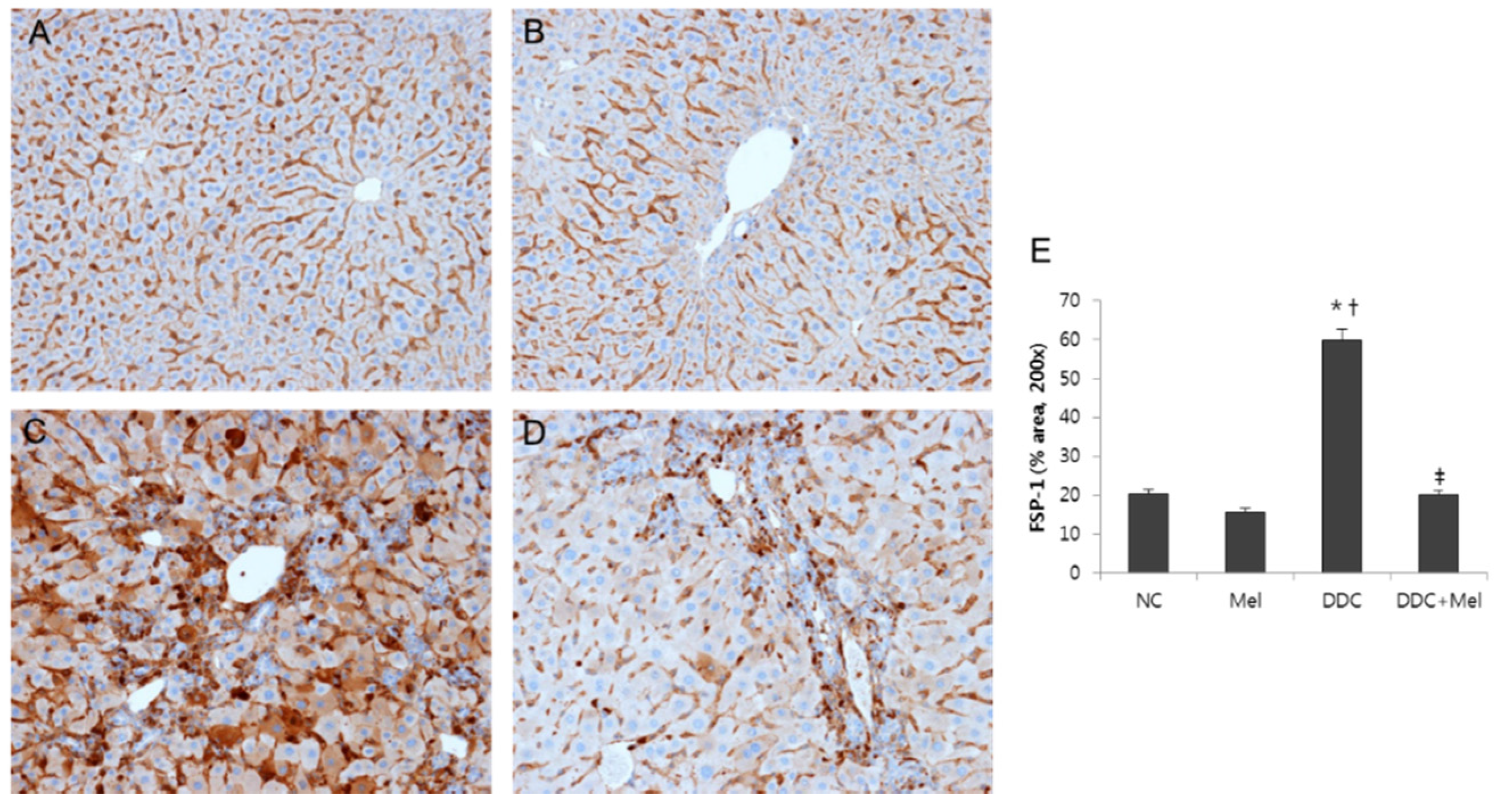 Proliferating cholangiocytes are characteristic for DDC-fed mice and are a source of growth factors, chemokines, cytokines and other soluble factors. Cholangiocytes as specialized epithelial cells that line the biliary tree are considered as pace markers of biliary fibrosis [18]. Cholangiocyte-specific markers, including CK-7, are expressed in the epithelial cells of bile ductules in enlarged portal tracts. Chronic DDC feeding resulted in a comparable amount of ductular reaction and an increased number of CK-7- and PCNA-positive cells (Figure 9). In contrast, melittin treatment significantly suppressed the proliferation of cholangiocytes, which was shown as the expression of PCNA-positive cells in DDC + Mel livers. In summary, these data proved the ability of melittin to suppress cholangiocyte proliferation in response of DDC-induced liver injury and liver fibrosis.

For the induction of liver injury, 6–8-week-old C57BL/6 male mice (20–25 g; Samtako, Kyungki do, Korea) were used. Mice were fed with a 0.1% DDC-supplemented diets for 4 weeks, housed with a 12-h light/dark cycle and permitted ad libitum consumption of water. All animal protocols were approved by the Institutional Animal Care and Use Committee of Catholic University of Daegu (Daegu, Korea). Mice were randomly divided into four groups as follows: (1) untreated group (normal control, NC); (2) melittin-treated group with normal diet (Mel); (3) 0.1% DDC-supplemented diet group (DDC); (4) melittin-treated group with 0.1% DDC-supplemented diet (DDC + Mel). The Mel only group and the DDC + Mel group received intraperitoneal injection of melittin (0.1 mg/kg; Sigma-Aldrich, St. Louis, MO, USA) dissolved in saline twice a week. Mice were sacrificed after 4 weeks of treatment, and the livers were removed.

Small pieces of liver from each lobe were kept in 10% formalin solution. Paraffin-embedded liver tissues were sectioned and stained with H&E and Masson’s trichrome according to the standard protocol. For immunohistochemistry, sections were incubated with anti-monocyte chemoattractant protein (MCP)-1 and anti-fibroblast specific protein (FSP)-1. After three serial washes with phosphate-buffered saline (PBS), the sections were processed by an indirect immunoperoxidase technique using a commercial kit (LSAB kit; Dako, Glostrup, Denmark). The slides were examined with an Eclipse 80i microscope (Nikon, Tokyo, Japan) and analysed with iSolution DT software (IMT i-Solution, Coquitlam, BC, Canada).

Data are presented as the mean ± SE. Student’s t-test was used to assess the significance of independent experiments. The criterion p < 0.05 was used to determine statistical significance.

These data expand the role for melittin in regulating the expression of ECM and begin to provide insight into its regulation by liver fibrosis and related pathologies, PSC and biliary fibrosis.

This work was supported by the National Research Foundation of Korea Grant funded by the Korean Government (NRF-2014R1A1A2008955).