Deoxynivalenol (DON) is one of the major mycotoxins produced by Fusarium fungi, and exposure to this mycotoxin requires an assessment of the potential adverse effects, even at low toxin levels. The aim of this study was to investigate the effects of a short-term, low-dose DON exposure on various gut health parameters in pigs. Piglets received a commercial feed or the same feed contaminated with DON (0.9 mg/kg feed) for 10 days, and two hours after a DON bolus (0.28 mg/kg BW), weight gain was determined and samples of different segments of the intestine were collected. Even the selected low dose of DON in the diet negatively affected weight gain and induced histomorphological alterations in the duodenum and jejunum. The mRNA expression of different tight junction (TJ) proteins, especially occludin, of inflammatory markers, like interleukin-1 beta and interleukin-10 and the oxidative stress marker heme-oxigenase1, were affected along the intestine by low levels of DON in the diet. Taken together, our results indicate that even after low-level exposure to DON, which has been generally considered as acceptable in animal feeds, clinically-relevant changes are measurable in markers of gut health and integrity. View Full-Text
Keywords: deoxynivalenol; intestine; weight gain; histomorphology; tight junctions; cytokines deoxynivalenol; intestine; weight gain; histomorphology; tight junctions; cytokines
►▼ Show Figures 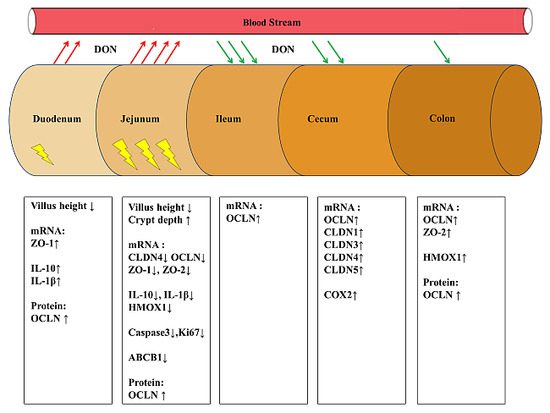