Recent Advances in Research on Widow Spider Venoms and Toxins

Chitin-binding proteins (CBPs) are present in many species and they act in a variety of biological processes. We analyzed a Pteromalus puparum venom apparatus proteome and transcriptome and identified a partial gene encoding a possible CBP. Here, we report cloning a full-length cDNA of a sequence encoding a chitin-binding-like protein (PpCBP) from P. puparum, a pupal endoparasitoid of Pieris rapae. The cDNA encoded a 96-amino-acid protein, including a secretory signal peptide and a chitin-binding peritrophin-A domain. Phylogenetic analysis of chitin binding domains (CBDs) of cuticle proteins and peritrophic matrix proteins in selected insects revealed that the CBD of PpCBP clustered with the CBD of Nasonia vitripennis. The PpCBP is specifically expressed in the venom apparatus of P. puparum, mostly in the venom gland. PpCBP expression was highest at day one after adult eclosion and much lower for the following five days. We produced a recombinant PpCBP and binding assays showed the recombinant protein selectively binds chitin but not cellulose in vitro. We infer that PpCBP serves a structural role in the venom reservoir, or may be injected into the host to help wound healing of the host exoskeleton. View Full-Text
Keywords: parasitoid; chitin binding protein; venom apparatus; venom proteins parasitoid; chitin binding protein; venom apparatus; venom proteins
►▼ Show Figures 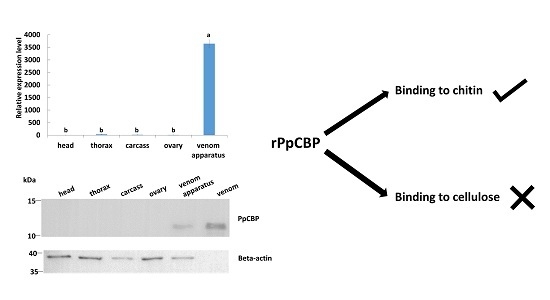