The Effects of Low Doses of Two Fusarium Toxins, Zearalenone and Deoxynivalenol, on the Pig Jejunum. A Light and Electron Microscopic Study

Due to its dependency on moderate climate conditions and its resistance to processing the Fusarium toxin, deoxynivalenol (DON) can be often found in toxicologically-relevant concentrations in cereals in temperate climate zones [1]. It is of special importance in pig production due to the high susceptibility of pigs, causing reduced feed intake and live weight gain, resulting in considerable economic losses [2,3,4].
Several studies indicate that DON influences the systemic inflammatory response. The toxin exerts immune modulatory effects on blood leukocytes depending on the dose and frequency of exposure. Different studies have shown that a low dose exposure to Fusarium toxins has an immune-stimulating effect due to an upregulation of transcriptional and post-transcriptional expression of cytokines, chemokines and inflammatory genes, whereas a high dose exposure has an immune-suppressive effect (reviewed in [5]). It has further been shown that exposure to DON causes an altered immune response [6,7,8] and liver cell metabolism [9,10] to a subsequent lipopolysaccharide (LPS) challenge in vitro and in vivo.
Lipopolysaccharides form the major component of the outer cell membrane of Gram-negative bacteria and are responsible for the onset of an inflammatory response in the case of systemic LPS entry [11]. Triggering similar (immune biological) pathways, a variety of infectious pathogens, such as Gram-positive and Gram-negative bacteria, viruses and fungi, leads to identical clinical sequelae commonly described with the term sepsis [12,13]. Since infections with Gram-negative bacteria contribute to a substantial part of the sepsis cases worldwide, LPS-induced systemic inflammation is a well-established sepsis model in animals and humans [11,14,15,16].
On a systemic level, the recognition of LPS by the immune system causes the release of pro-inflammatory cytokines. This leads to inflammation, apoptosis, causing endothelial dysfunction, and microcirculation thrombosis, resulting in perfusion heterogeneity and microcirculatory failure [12]. Clinically, these alterations manifest themselves in a variety of symptoms, such as hypothermia or hyperthermia, tachycardia, tachypnea, edema, central nervous dysfunction, leukocytosis and leukopenia [11,16,17]. In concurrence with a pronounced inflammatory response, blood analysis reveals often lactic acidosis [18,19,20], along with either dysglycemia depending on the stage of disease [17,18,21].
As DON can be ubiquitous in cereals and pigs might be sub-acutely exposed on the one hand, while LPS is always present in the environment and commensal intestinal microbiota, on the other hand, pigs might be often co-exposed to both toxins at the same time. The liver possesses a central role in LPS detoxification [22,23] or in metabolic and immunological homeostasis [24] of, and it has been shown before that chronic exposure to DON leads to altered liver cell metabolism [9,10]. We hypothesized that liver metabolism and hematological variables are altered in chronically-DON-fed animals during a subsequent LPS stimulus. An increase in systemic LPS can either be a consequence of a systemic infection [17] or an increased passage from portal-drained viscera [25]. In order to simulate these pathways of systemic LPS entrance and the consequences of a possible hepatic first-pass effect, we infused LPS pre- or post-hepatically. Arterial, jugular and portal blood metabolic variables were assessed to evaluate the role of the liver in this pathogenesis as a consequence of LPS infusion. 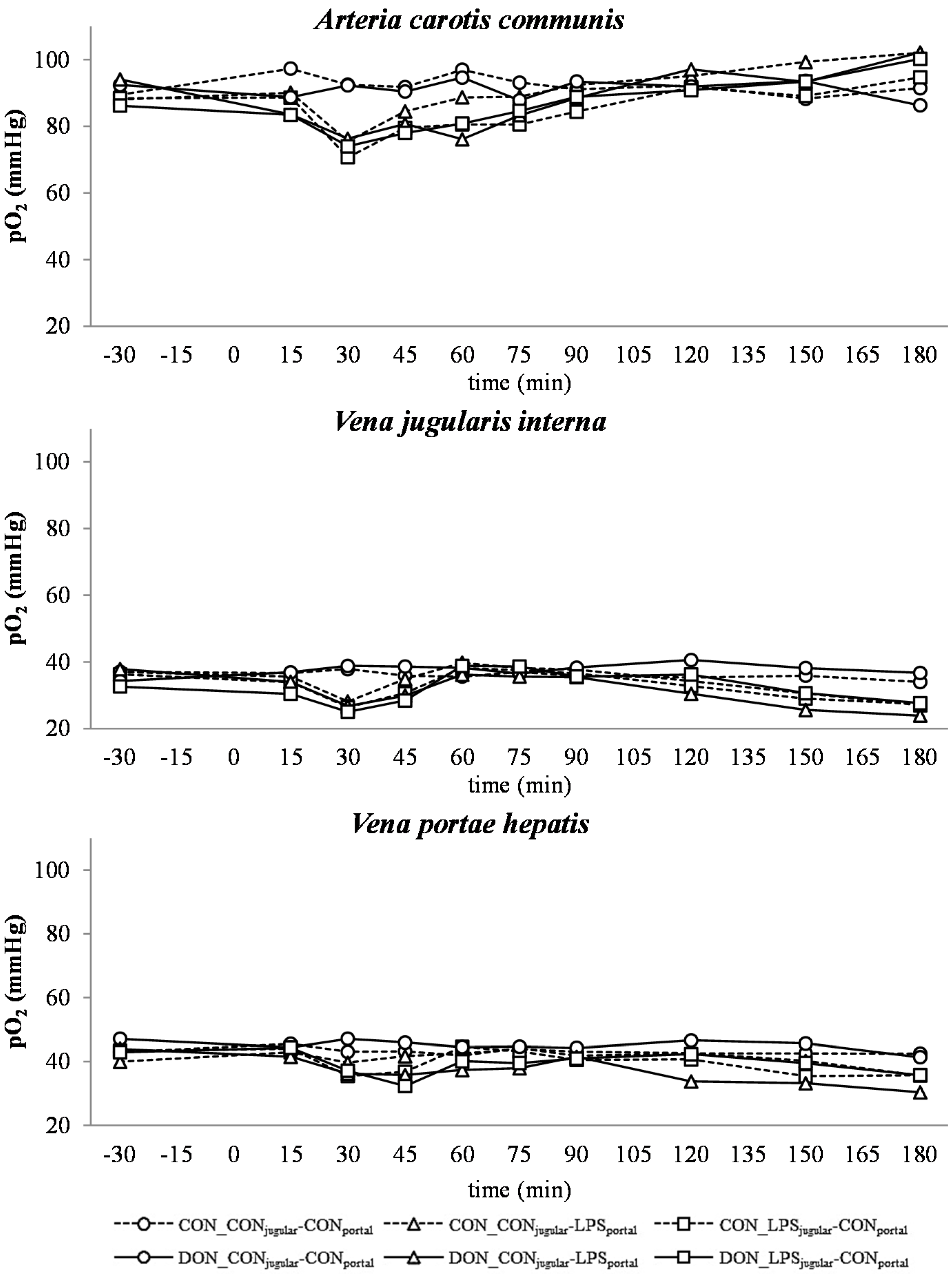 Arterial, jugular and portal partial oxygen pressures (pO2) are illustrated in Figure 1. On average, partial O2 pressures of the control group were 92.42 mmHg in arterial, 36.07 mmHg in jugular and 43.08 mmHg in portal blood (SEM = 1.21), respectively. The arterial pO2 was near the physiological reference value of 98 mmHg [26]. Between 15 and 60 min, a general decrease in pO2 in all LPS-infused groups (compared to their control groups) was observed at all infusion sites (p < 0.05), which started to return to base level at 60 min. The decrease was most pronounced in arterial blood. Thereafter, a subsequent increase in pO2 in all LPS-infused groups until 180 min was observed (p < 0.05). At jugular and portal sampling sites, pO2 decreased after 90 min, again below the control group level, and decreased thereafter until 120 min in jugular (p < 0.05) and 180 min in portal (p < 0.05) blood. A significant effect of DON exposure on arterial pO2 was observed at 60 min with pre-hepatic LPS-infused control-fed pigs starting to return to base level earlier than their DON-fed counter parts (p < 0.01). No effect of DON treatment was observed in post-hepatic infused animals. No DON effects were observed on jugular and portal pO2. Portal pO2 pressures were subjected more to fluctuations compared to arterial and portal pO2.

Partial CO2 pressure (pCO2) of control group was 37.80 mmHg in arterial, 47.59 mmHg in jugular and 52.42 mmHg in portal blood (SEM = 0.75) on average. At the arterial and jugular sampling site, a pCO2 below the physiological reference range (50 mmHg) [26] was observed during the entire course of the trial and in all groups. Only arterial pCO2 was influenced by LPS treatment (Figure 2). From 120–180 min, a steady decrease was observed compared to the control group (p < 0.05). A slight portal pCO2 increase was observed from −30 min until 180 min in all groups (Figure 2). Chronic oral exposure to DON had no impact on pCO2 irrespective of LPS infusion site. In jugular, as well as portal blood samples, undirected fluctuations were observed. 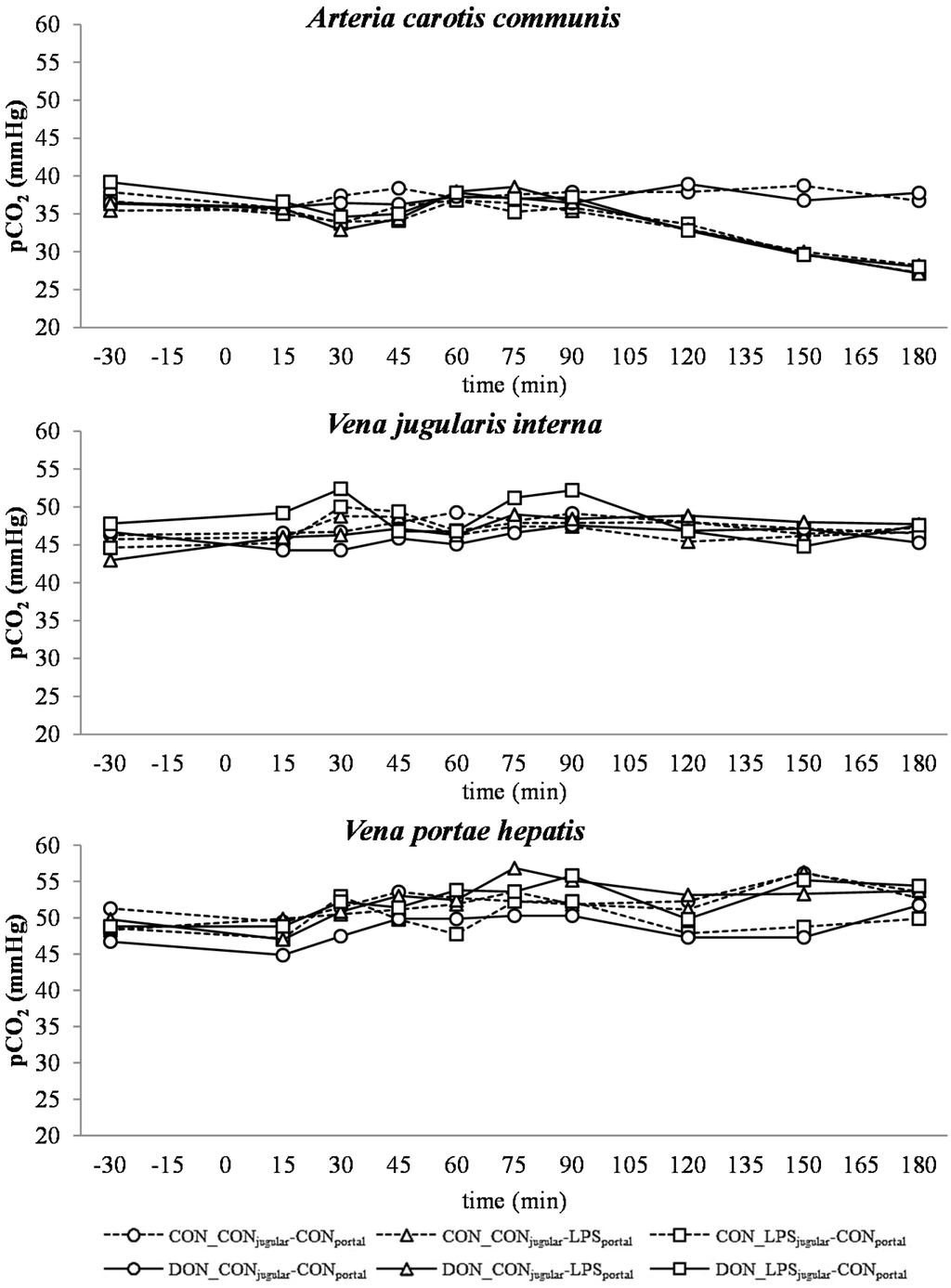 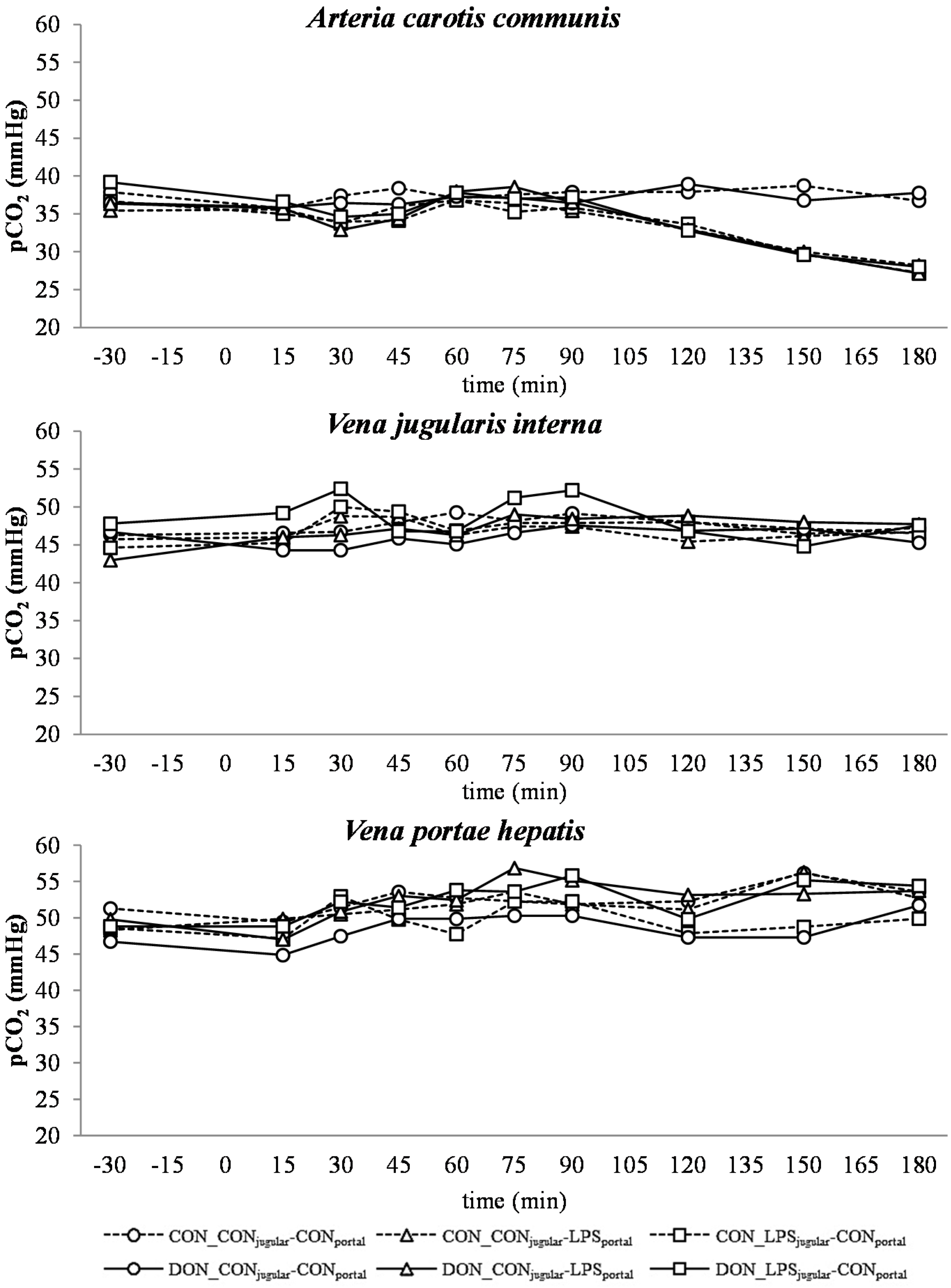 A post-prandial increase in glucose until 15–30 min and a subsequent decrease until time 120 min to the base level was observed in all groups (Figure 3), most pronounced at the portal sampling site. The control (CON)-fed animals generally exhibited higher glucose levels at the portal sampling site at 30–45 min (depending on group) than DON-fed animals (Figure 3). The control group (CON_CONjugular-CONportal) maintained elevated post-prandial glucose levels for nearly the entire time course (significantly higher than other groups at 60 min, 90 min and 120 min; p < 0.05 at 120 min). 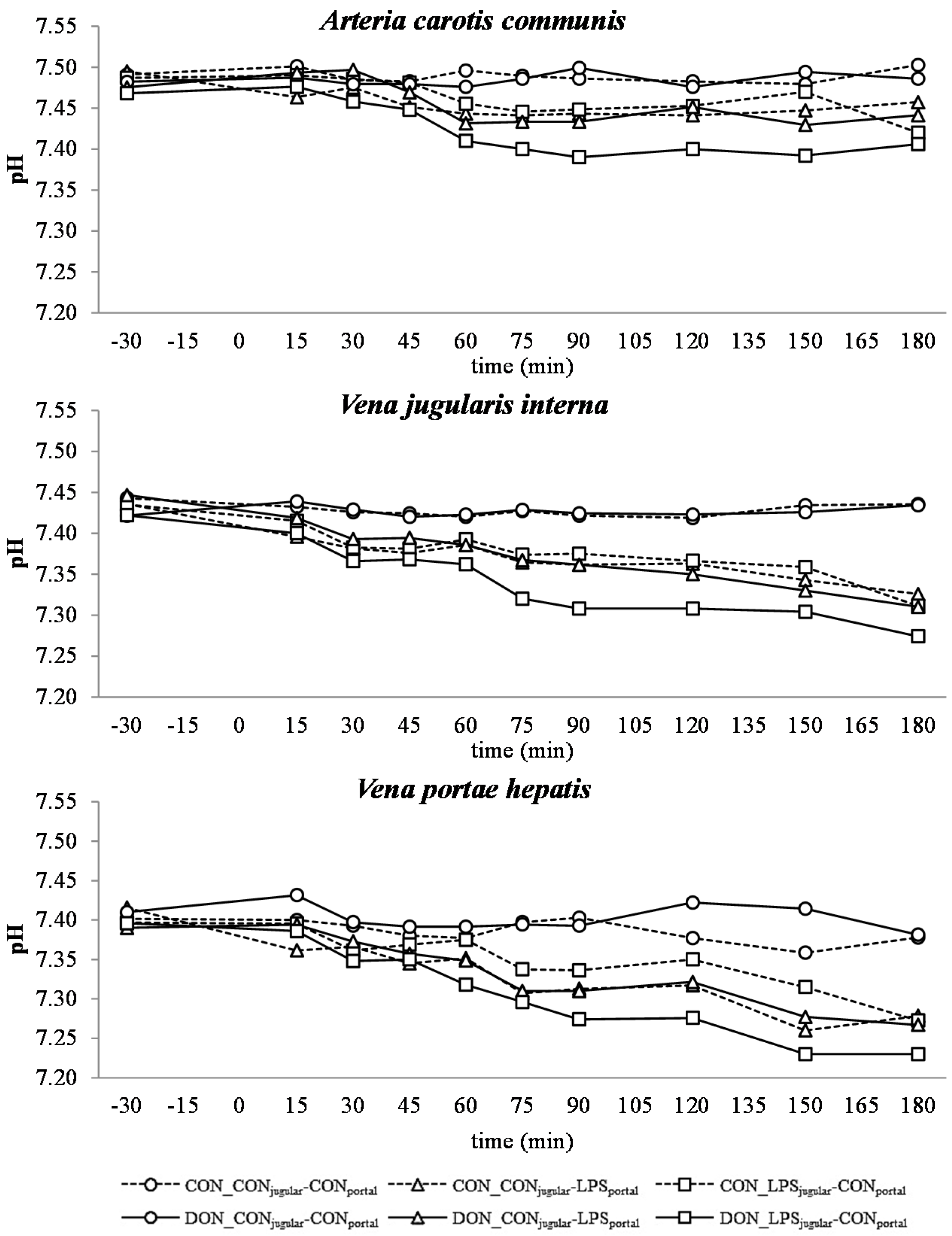 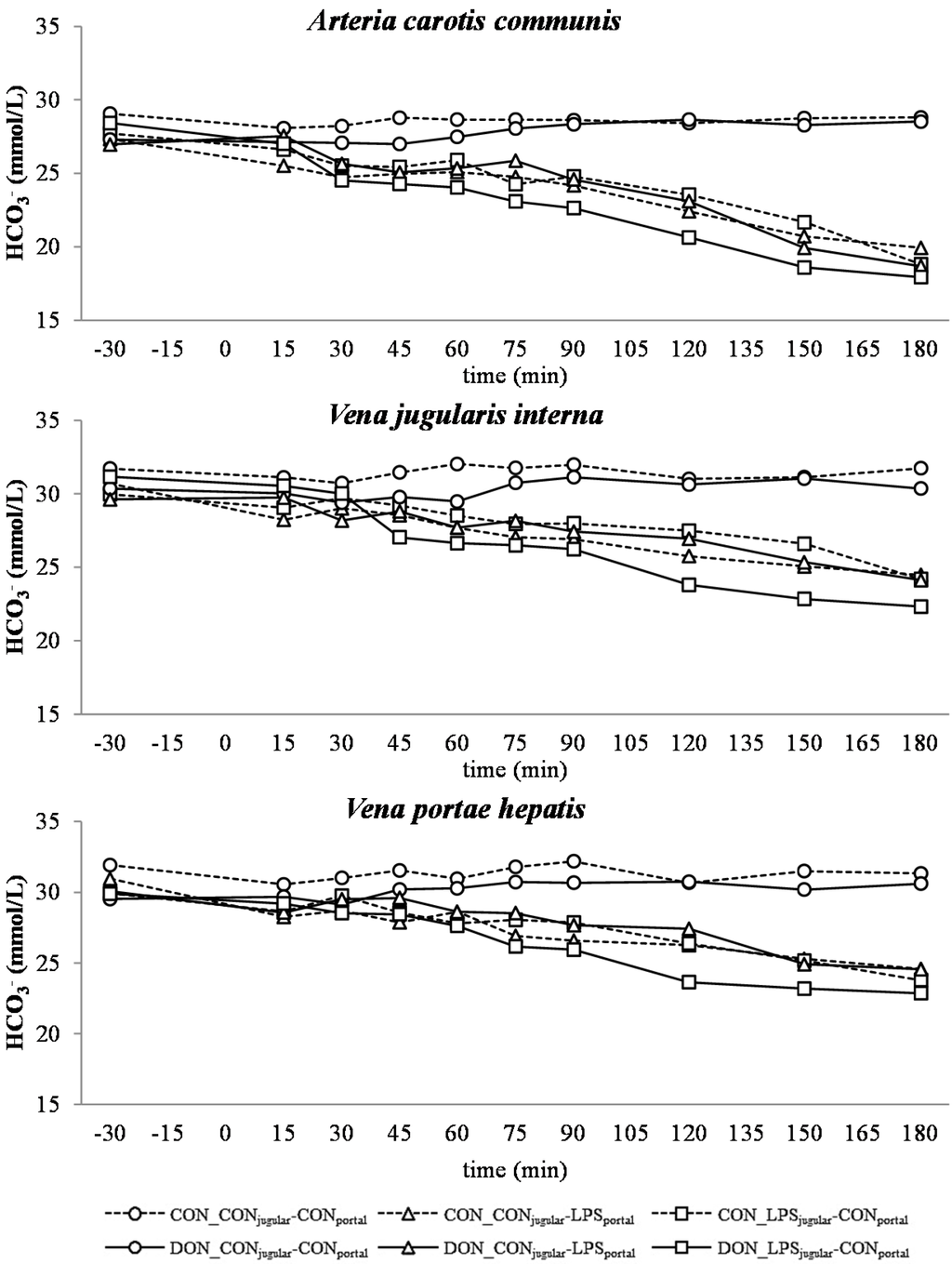 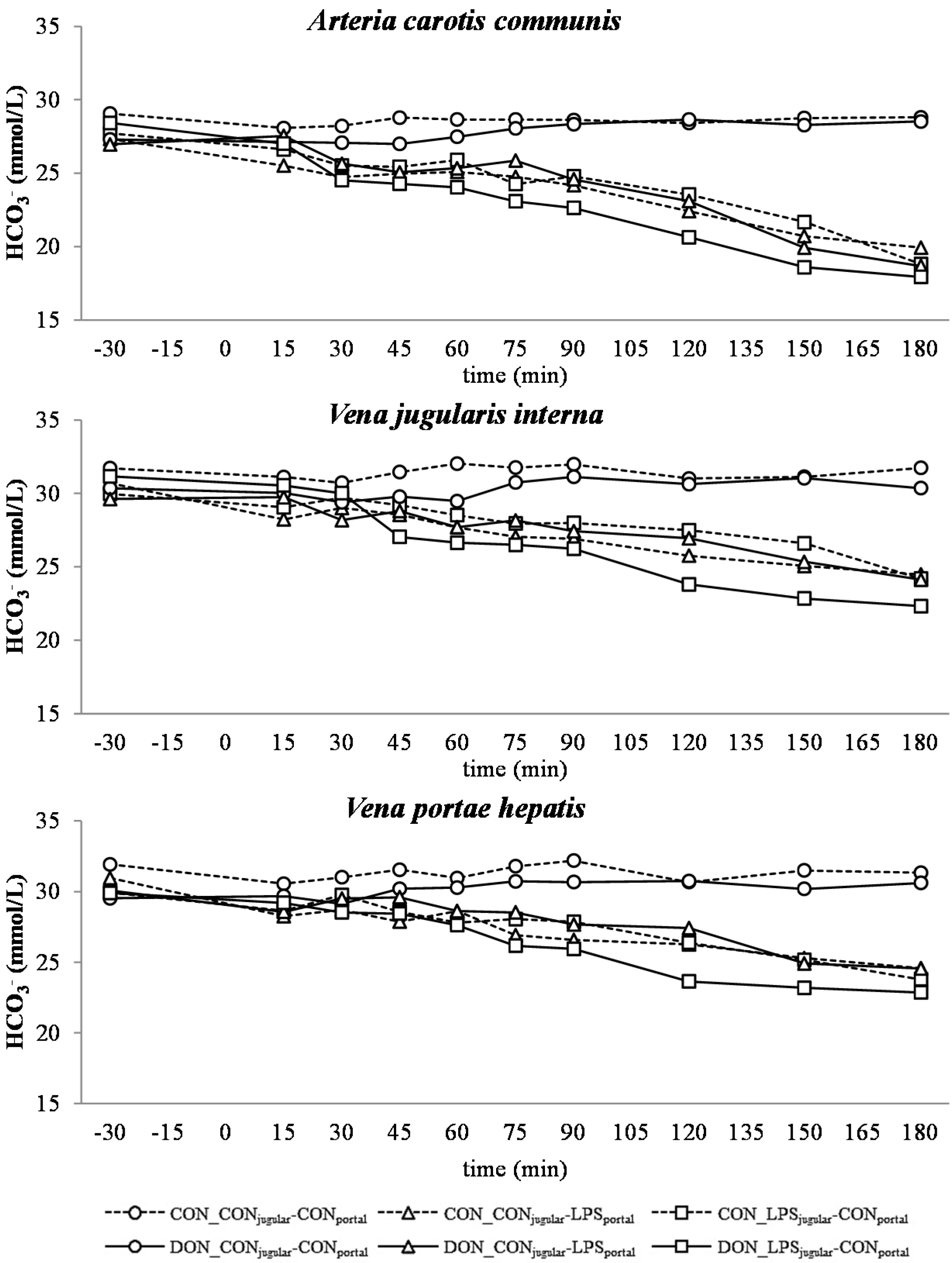 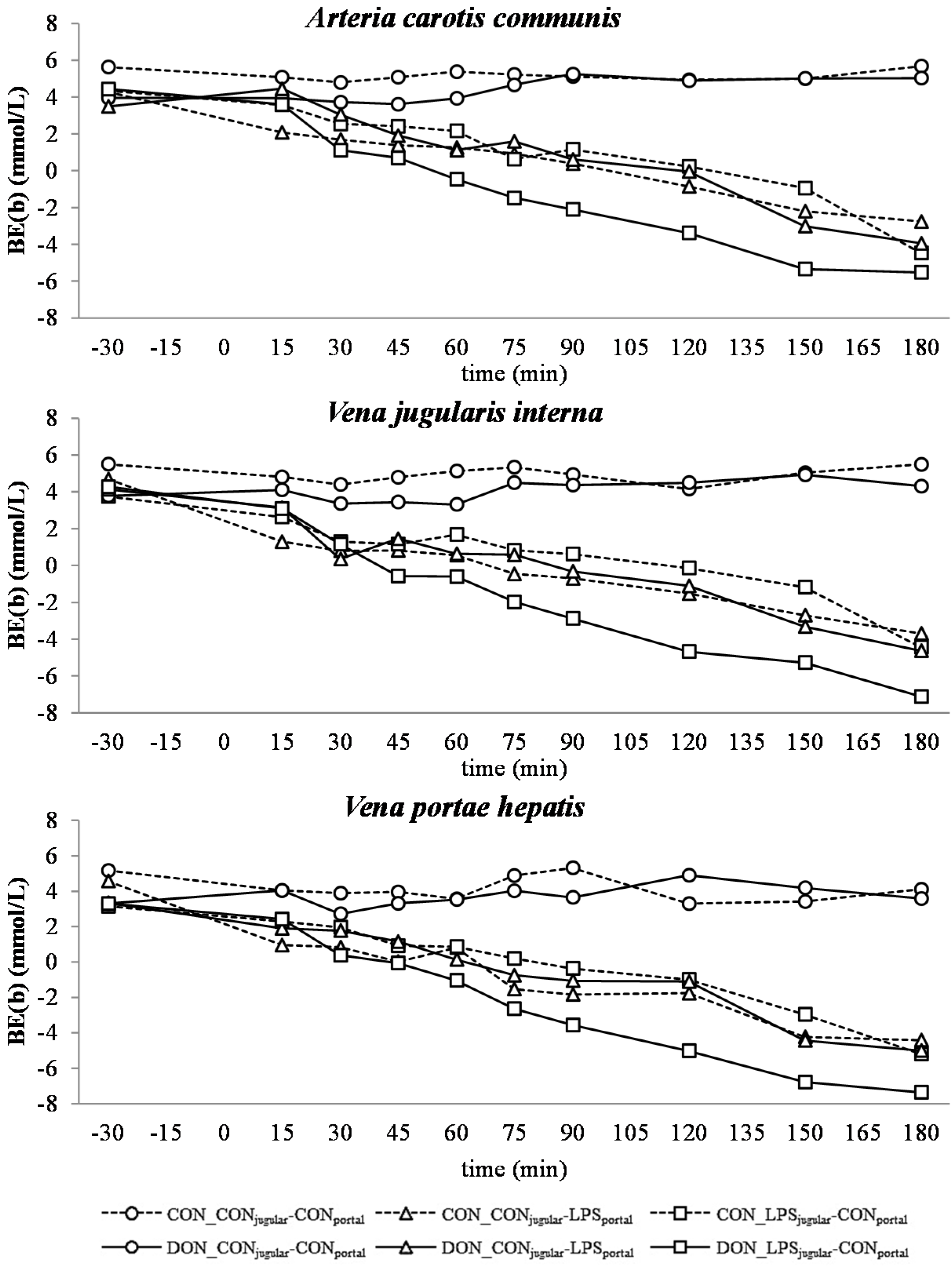 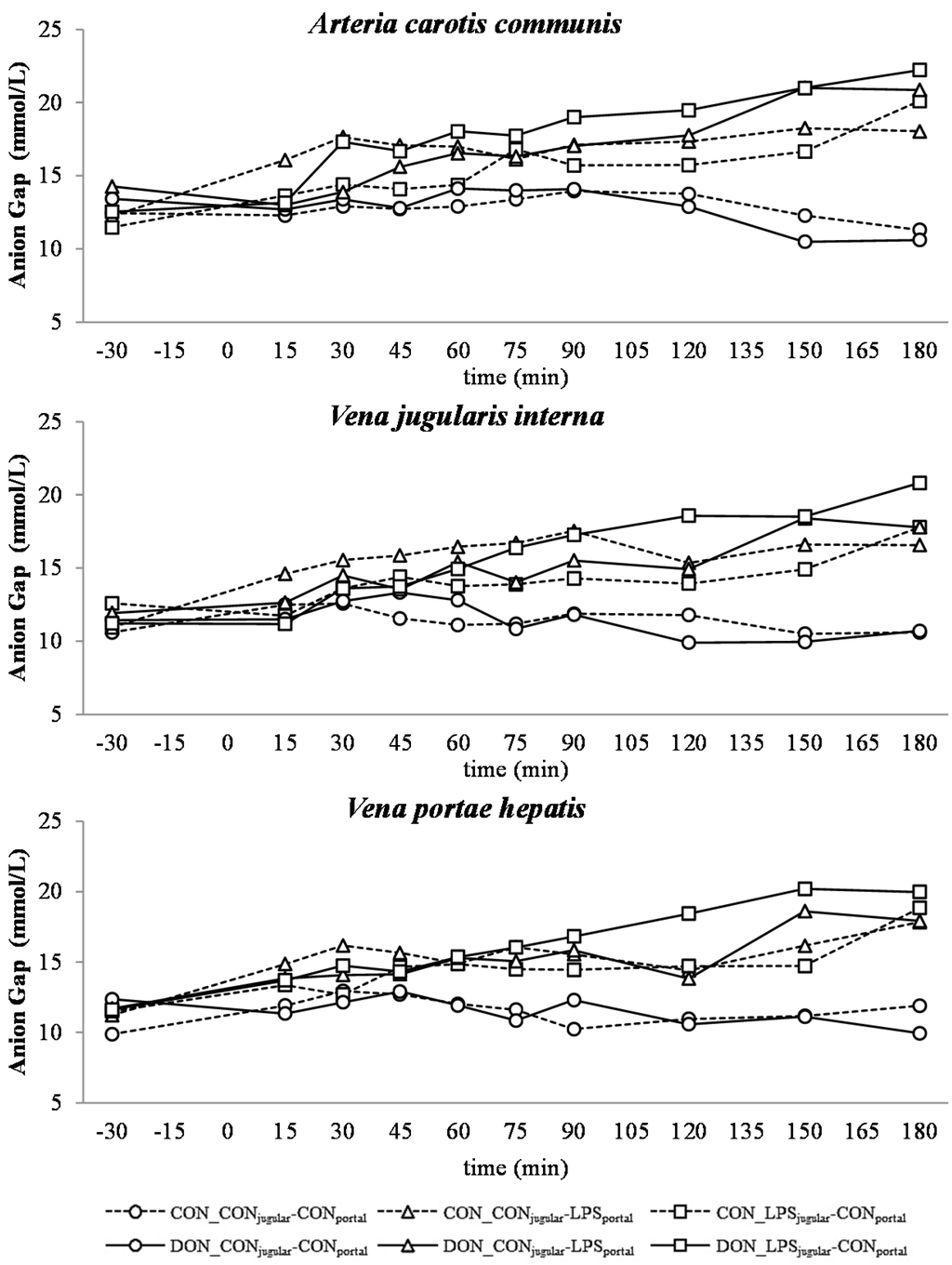 In all LPS-infused pigs, lactic acidosis was induced, and the acid-base balance variables were altered accordingly (Figure 4, Figure 5, Figure 6, Figure 7 and Figure 8). Compared to the control group (CON_CONjugular-CONportal), pH (Figure 4), bicarbonate (Figure 6) and base excess (BE; Figure 7) decreased and lactate (Figure 5) and anion-gap (AG; Figure 8) increased significantly (p < 0.05). The control group stayed in the physiological range [26] for pH (arterial), lactate (venous) [28], HCO3− (arterial) and AG (venous) [27], but BE (arterial) was above the reference range over the course of the trial with individual variations (5.23 mmol/L ± 0.79; mean ± SE).
DON treatment had no effect on control and pre-hepatic LPS-infused groups, but a significant DON effect was observed in post-hepatic LPS-infused animals. Lactic acidosis was most pronounced in post-hepatic LPS-infused DON-fed pigs (DON_LPSjugular-CONportal) at different times in comparison to their control-fed counterparts (CON_LPSjugular-CONportal) and the pre-hepatic LPS-infused groups (p < 0.05) (shown in the post hoc tables, Figure 4, Figure 5, Figure 6, Figure 7 and Figure 8). The DON_LPSjugular-CONportal group had a different time course compared to the other LPS groups for all variables of acid-base balance. This was most apparent in lactate, with a significant increase compared to the control already at 75–180 min at all catheters in contrast to the other LPS groups, which were only significantly different from the control at 150 min and 180 min. Additionally, we observed a chronological sequence of lactic acidosis variables compared to the control: pO2, HCO3− and BE already changed at 30–45 min, followed by pH at 60 min, and as the last variable, lactate rose significantly at 75 min.

A total of 41 barrows (German landrace, Mariensee, Germany) were randomly assigned to either a group receiving natural DON-contaminated feed (DON; 4.59 mg DON/kg feed; n = 19) or a control group (CON; n = 22) control diet (Table 3). Experimental groups, their treatment and the number of animals are illustrated in Figure 9. The pigs had an average initial weight of 25.8 ± 3.7 kg (means ± SD) and were fed restrictively with 2 single portions of 700 g per day, mixed with water and provided as mash. All barrows were housed in individual floor pens during the first 21 days of the trial and subsequently transferred into individual metabolism crates (described in [63]) until Day 29.

On the sampling day, the time of infusion start was set as zero, and blood samples were taken at −30, 15, 30, 45, 60, 75, 90, 120, 150 and 180 min from Vena jugularis interna, Vena portae hepatis and Arteria carotis communis. Fifteen minutes prior to infusion, pigs received 700 g of feed each. LPS was infused at 7.5 µg LPS/kg BW for 1 h (Escherichia coli-LPS, O111:B4, Sigma-Aldrich, Taufkirchen, Germany), and 0.9% NaCl was used as the control substance. Infusion was implemented using an infusion pump (IPC-N-4, ISMATEC Laboratoriumstechnik GmbH, Wertheim, Germany) and infusion tubes with a 2.06 mm inner diameter (PharMed® Ismaprene, Wertheim, Germany, ISMATEC), administered into either Vena jugularis externa or Vena lienalis. The pigs were slaughtered 195 min after infusion start.

Data were evaluated by using PROC MIXED in SAS Enterprise Guide 6.1 (SAS Institute 2013, Cary, NC, USA) using a restricted maximum likelihood model (REML). Group, catheter, time and their interaction were defined as fixed factors. A “REPEATED” statement was included to account for the individual similarity at repeated measurements. The “compound symmetry” was found to be the most appropriate co-variance structure according to the corrected Akaike’s information criterion (AICC), and significant effects at different time points were further evaluated by multiple t-tests (“pairwise differences” (PDIFF)). Results are presented as least square means (LSMeans) and pooled standard error of means (PSEM).

Concluding, we could demonstrate chronic enteral DON-exposure had a definite priming effect on the pig’s organism, specifically the acid-base balance, thus aggravating the sole impact of LPS depending on the site of its entry. The involvement of the liver in this scenario was apparent as post-hepatic LPS exposure elicited a much stronger impact compared to pre-hepatic exposure in combination with mycotoxin feeding. Portal glucose uptake was significantly diminished in DON-fed animals compared to control, thus giving in vivo evidence to the previously-reported impairment of glucose transporter activity in ex vivo studies.

This study was financially supported by Deutsche Forschungsgemeinschaft (DFG DA 558/1-4 and RO 743/3-3). The authors would like to thank Nicola Mickenautsch, Lara Lindner and Elenia Scholz for their excellent technical support in sample analysis. Furthermore, the authors gratefully acknowledge Melanie Schären for critical language editing of the manuscript.