Bacillus thuringiensis (Bt) is a gram-positive spore-forming soil bacterium that is distributed worldwide. Originally recognized as a pathogen of the silkworm, several strains were found on epizootic events in insect pests. In the 1960s, Bt began to be successfully used to control insect pests in agriculture, particularly because of its specificity, which reflects directly on their lack of cytotoxicity to human health, non-target organisms and the environment. Since the introduction of transgenic plants expressing Bt genes in the mid-1980s, numerous methodologies have been used to search for and improve toxins derived from native Bt strains. These improvements directly influence the increase in productivity and the decreased use of chemical insecticides on Bt-crops. Recently, DNA shuffling and in silico evaluations are emerging as promising tools for the development and exploration of mutant Bt toxins with enhanced activity against target insect pests. In this report, we describe natural and in vitro evolution of Cry toxins, as well as their relevance in the mechanism of action for insect control. Moreover, the use of DNA shuffling to improve two Bt toxins will be discussed together with in silico analyses of the generated mutations to evaluate their potential effect on protein structure and cytotoxicity. View Full-Text
Keywords: Cry toxins; insect pests; biocontrol; evolution; phage, display, DNA shuffling; in silico studies; specific mutation Cry toxins; insect pests; biocontrol; evolution; phage, display, DNA shuffling; in silico studies; specific mutation
►▼ Show Figures 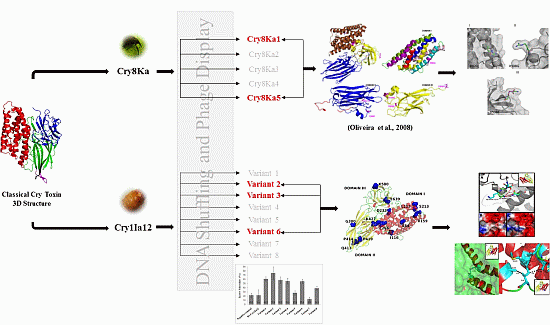