The objective of the study was to determine the effect of exposure of pigs to the Fusarium mycotoxins zearalenone (ZEN) and deoxynivalenol (DON), administered together and separately, on the colon microbiota. An experiment was conducted for 42 days on gilts, randomly assigned to four groups and administered either ZEN, DON, ZEN+DON, or a placebo. The number of aerobic mesophilic bacteria, yeasts, molds, anaerobic Clostridium perfringens, fecal streptococci, Enterobacteriaceae, Escherichia coli, and lactic acid bacteria (LAB) were determined in the contents of the ascending colon. The influence of mycotoxins on the functional diversity of the colonic microbiota was assessed using EcoPlate tests (Biolog). Analysis revealed the predominance of LAB in all groups of pigs. Zearalenone, administered separately and together with DON, was found to have an adverse effect on mesophilic aerobic bacteria, but only after long exposure to this mycotoxin. During the six weeks of the experiment, the concentration of C. perfringens, E. coli, and other bacteria in the family Enterobacteriaceae was most considerably reduced in the experimental groups exposed to zearalenone, both separately and together with DON. Mycotoxins also affected the functional biodiversity of microorganisms. Both Shannon’s diversity index and the number of catabolized substrates in Biolog plate (the R index) were much higher in the group subjected to mixed mycotoxicosis. View Full-Text
Keywords: zearalenone; deoxynivalenol; pigs; microbiota; ascending colon; functional diversity; mycotoxicosis; low dosis zearalenone; deoxynivalenol; pigs; microbiota; ascending colon; functional diversity; mycotoxicosis; low dosis
►▼ Show Figures 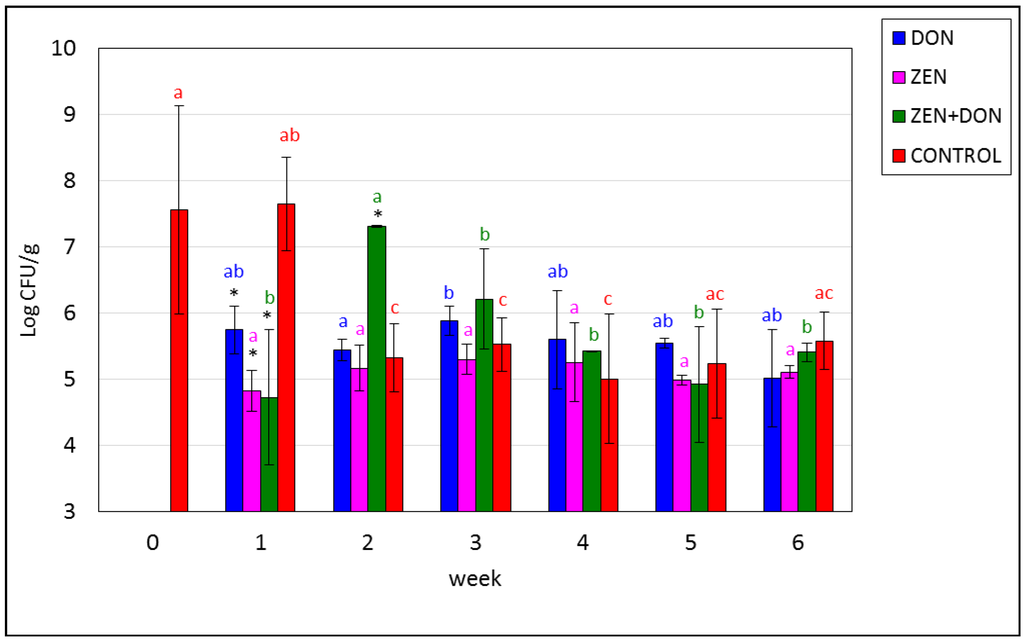