Evolution Stings: The Origin and Diversification of Scorpion Toxin Peptide Scaffolds
Next Article in Special Issue

Blooms of toxic cyanobacteria are well-known phenomena in many regions of the world. Microcystin (MC), the most frequent cyanobacterial toxin, is produced by entirely different cyanobacteria, including unicellular, multicellular filamentous, heterocytic, and non-heterocytic bloom-forming species. Planktothrix is one of the most important MC-producing genera in temperate lakes. The reddish color of cyanobacterial blooms viewed in a gravel pit pond with the appearance of a dense 3 cm thick layer (biovolume: 28.4 mm3 L−1) was an unexpected observation in the shallow lake-dominated alluvial region of the Carpathian Basin. [d-Asp3, Mdha7]MC–RR was identified from the blooms sample by MALDI-TOF and NMR. Concentrations of [d-Asp3, Mdha7]MC–RR were measured by capillary electrophoresis to compare the microcystin content of the field samples and the isolated, laboratory-maintained P. rubescens strain. In analyzing the MC gene cluster of the isolated P. rubescens strain, a deletion in the spacer region between mcyE and mcyG and an insertion were located in the spacer region between mcyT and mcyD. The insertion elements were sequenced and partly identified. Although some invasive tropical cyanobacterial species have been given a great deal of attention in many recent studies, our results draw attention to the spread of the alpine organism P. rubescens as a MC-producing, bloom-forming species. View Full-Text
Keywords: Planktothrix; waterbloom; microcystins; MALDI-TOF; cyanobacteria Planktothrix; waterbloom; microcystins; MALDI-TOF; cyanobacteria
►▼ Show Figures 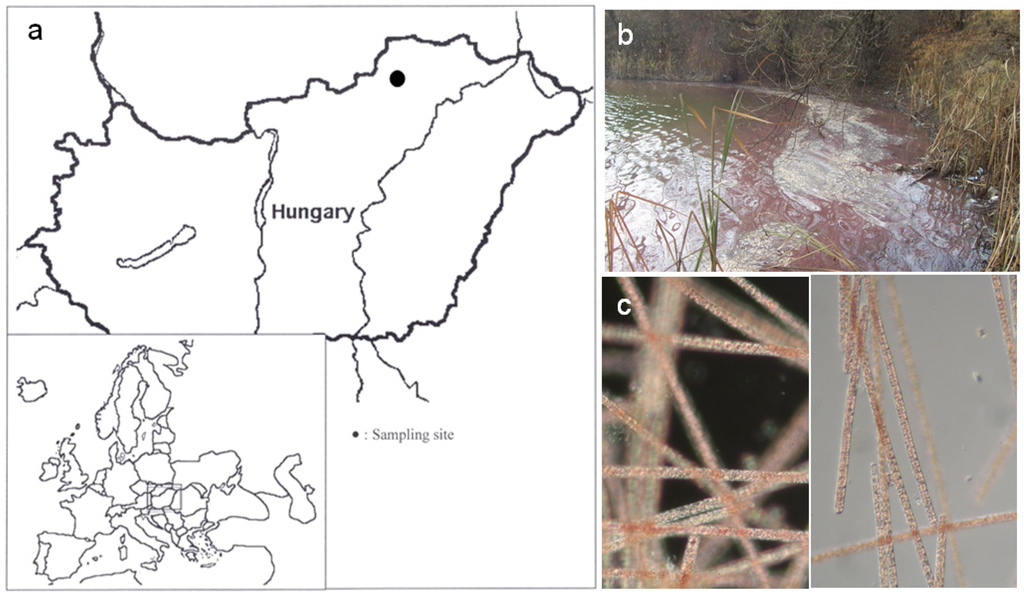