Evolution of resistance by pests can reduce the benefits of crops genetically engineered to produce insecticidal proteins from Bacillus thuringiensis (Bt). Because of the widespread resistance of Helicoverpa zea to crystalline (Cry) Bt toxins in the United States, the vegetative insecticidal protein Vip3Aa is the only Bt toxin produced by Bt corn and cotton that remains effective against some populations of this polyphagous lepidopteran pest. Here we evaluated H. zea resistance to Vip3Aa using diet bioassays to test 42,218 larvae from three lab strains and 71 strains derived from the field during 2016 to 2020 in Arkansas, Louisiana, Mississippi, Tennessee, and Texas. Relative to the least susceptible of the three lab strains tested (BZ), susceptibility to Vip3Aa of the field-derived strains decreased significantly from 2016 to 2020. Relative to another lab strain (TM), 7 of 16 strains derived from the field in 2019 were significantly resistant to Vip3Aa, with up to 13-fold resistance. Susceptibility to Vip3Aa was significantly lower for strains derived from Vip3Aa plants than non-Vip3Aa plants, providing direct evidence of resistance evolving in response to selection by Vip3Aa plants in the field. Together with previously reported data, the results here convey an early warning of field-evolved resistance to Vip3Aa in H. zea that supports calls for urgent action to preserve the efficacy of this toxin. View Full-Text
Keywords: Bacillus thuringiensis; resistance monitoring; Vip3Aa; sustainability; genetically engineered crop; corn; cotton Bacillus thuringiensis; resistance monitoring; Vip3Aa; sustainability; genetically engineered crop; corn; cotton
►▼ Show Figures 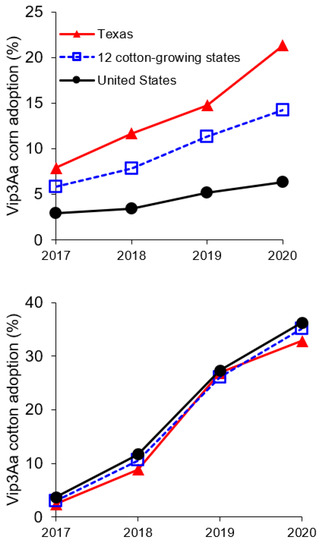