Organisation of Multi-Mycotoxin Proficiency Tests: Evaluation of the Performances of the Laboratories Using the Triple A Rating Approach
Next Article in Special Issue

Some Australian elapids possess potently procoagulant coagulotoxic venoms which activate the zymogen prothrombin into the functional enzyme thrombin. Although the activity of Australian elapid prothrombin-activators has been heavily investigated with respect to the mammalian, and in particular, human clotting cascades, very few studies have investigated the activity of their venom upon reptile plasmas. This is despite lizards representing both the primary diet of most Australian elapids and also representing natural predators. This study investigated the procoagulant actions of a diverse range of Australian elapid species upon plasma from known prey species within the genera Tiliqua (blue tongue skinks) as well as known predator species within the genera Varanus (monitor lizards). In addition to identifying significant variation in the natural responses of the coagulation cascade between species from the genera Tiliqua and Varanus relative to each other, as well as other vertebrate lineages, notable differences in venom activity were also observed. Within the genus Tiliqua, both T. rugosa and T. scincoides plasma displayed significant resistance to the procoagulant activity of Pseudechis porphyriacus venom, despite being susceptible to all other procoagulant elapid venoms. These results indicate that T. rugosa and T. scincoides have evolved resistance within their plasma to the coagulotoxic venom activity of the sympatric species P. porphyriacus. Other venoms were able to activate Tiliqua prothrombin, which suggests that the lessened activity of P. porphyriacus venom is not due to modifications of the prothrombin and may instead be due to a serum factor that specifically binds to P. porphyriacus toxins, as has been previously seen for squirrels resistant to rattlesnake venom. In contrast, none of the predatory lizards studied (Varanus giganteus, V. mertensi and V. varius) demonstrated resistance to the venom. This suggests that the mechanical protection afforded by thick osteodermic scales, and prey handling behaviour, removes a selection pressure for the evolution of resistance in these large predatory lizards. These results therefore reveal differential interactions between venoms of snakes with sympatric lizards that are on opposite sides of the predator–prey arms race. View Full-Text
Keywords: coagulotoxins; plasma; Pseudechis; Pseudonaja; resistance; Tiliqua; Varanus coagulotoxins; plasma; Pseudechis; Pseudonaja; resistance; Tiliqua; Varanus
►▼ Show Figures 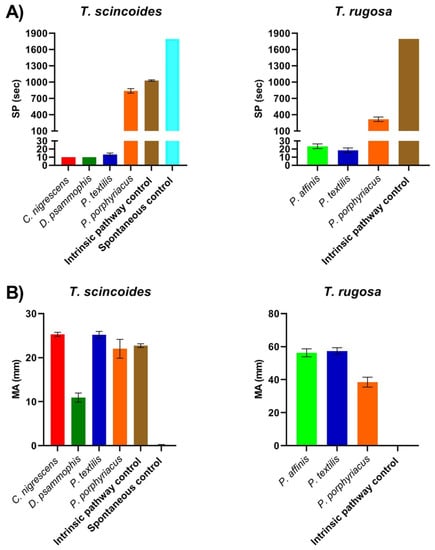