Cardiac glycosides (CGs), toxins well-known for numerous human and cattle poisoning, are natural compounds, the biosynthesis of which occurs in various plants and animals as a self-protective mechanism to prevent grazing and predation. Interestingly, some insect species can take advantage of the CG’s toxicity and by absorbing them, they are also protected from predation. The mechanism of action of CG’s toxicity is inhibition of Na+/K+-ATPase (the sodium-potassium pump, NKA), which disrupts the ionic homeostasis leading to elevated Ca2+ concentration resulting in cell death. Thus, NKA serves as a molecular target for CGs (although it is not the only one) and even though CGs are toxic for humans and some animals, they can also be used as remedies for various diseases, such as cardiovascular ones, and possibly cancer. Although the anticancer mechanism of CGs has not been fully elucidated, yet, it is thought to be connected with the second role of NKA being a receptor that can induce several cell signaling cascades and even serve as a growth factor and, thus, inhibit cancer cell proliferation at low nontoxic concentrations. These growth inhibitory effects are often observed only in cancer cells, thereby, offering a possibility for CGs to be repositioned for cancer treatment serving not only as chemotherapeutic agents but also as immunogenic cell death triggers. Therefore, here, we report on CG’s chemical structures, production optimization, and biological activity with possible use in cancer therapy, as well as, discuss their antiviral potential which was discovered quite recently. Special attention has been devoted to digitoxin, digoxin, and ouabain. View Full-Text
Keywords: cancer treatment; cardenolides; digitoxin; digoxin; drug repositioning; immunogenic cell death; Na+/K+ ATPase; antiviral potential; secondary plant metabolites; toxins cancer treatment; cardenolides; digitoxin; digoxin; drug repositioning; immunogenic cell death; Na+/K+ ATPase; antiviral potential; secondary plant metabolites; toxins
►▼ Show Figures 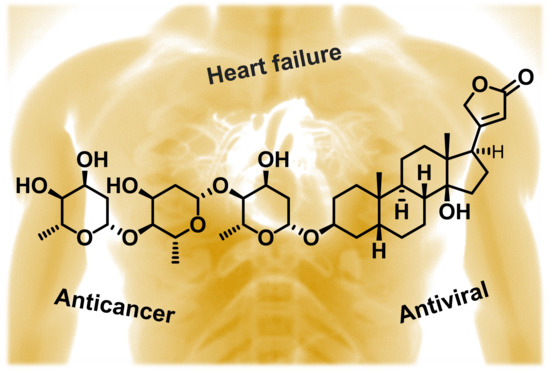